John Waters movies definitely aren’t for everyone especially when you look at his earlier works such as Pink Flamingos, Desperate Living, and Female Trouble. But towards the end of the 1990s Waters moved away from the controversial & cult movies and began making more mainstream movies but obviously, they still contained a lot of his unique style and comedy. Serial Mom was actually one of the first Waters movies I watched and my instant love for it resulted in me going through his back catalogue to see what else I’d missed out on. I am now a massive fan of all of his work!

The premise of the movie is a simple one being that perfect Baltimore housewife Beverly Sutphin (Kathleen Turner) is a secret serial killer. Kathleen absolutely nails it and I can’t actually imagine any other actress playing the part of Beverly but during production, many other big names were considered including Meryl Streep, Glenn Close, Julie Andrews, and even Roseanne Barr. All I really knew of Kathleen Turner (when my young self first watched this) was that she was the voice of Jessica Rabbit and played a transsexual, Helena Handbasket, in Friends.

This movie made me fall in love with her big time, there was something so captivating about her voice and performances that I’d never noticed before. Her performance in Serial Mom was actually so convincing that people genuinely believed that Beverly and her murders were (or at least based on) real events. In recent years John Waters has revealed that people have asked him “Where is Beverly now?”. Waters did actually sit in on real famous court cases, study homicide (the gorier the better), and do non-stop reading of true crime stories so I suppose it is understandable that people thought there was an element of truth to the movie. It was these interests that inspired the movie after all. 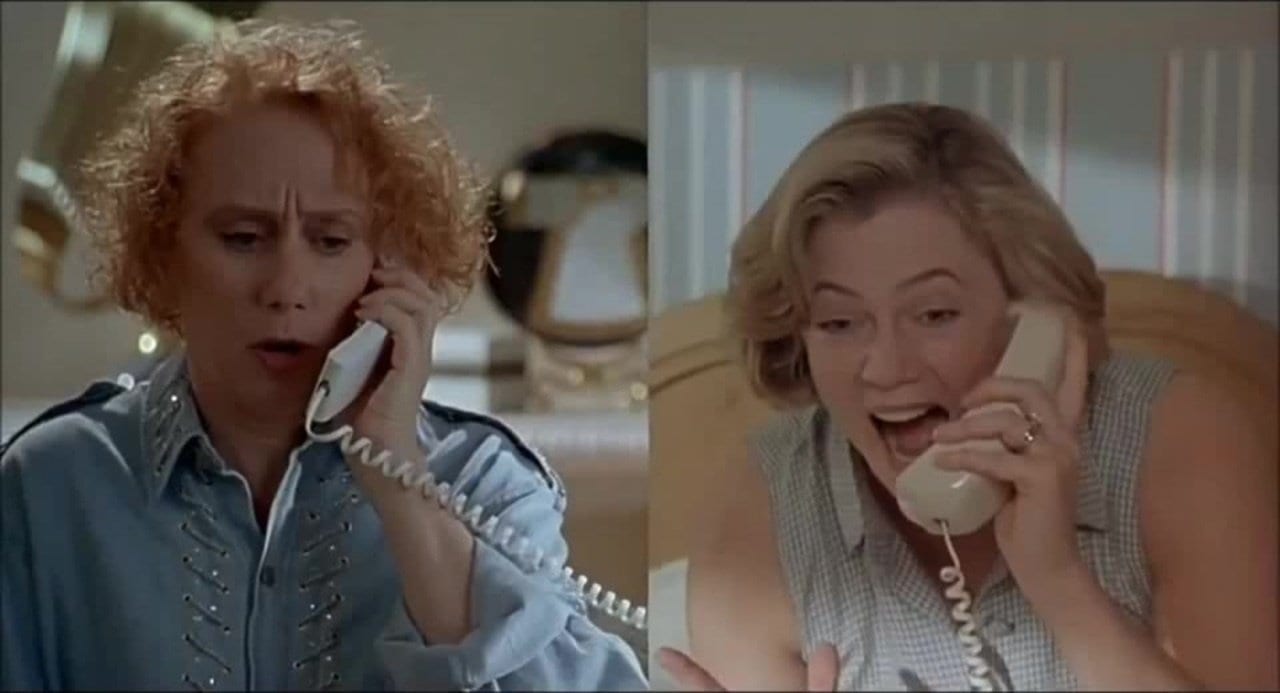 Has there ever been a better or funnier prank call in a movie? Not content with just murdering people she also likes to psychologically torture her neighbours by making obscene prank calls to poor Dottie Hinkle played by John Waters movie regular, Mink Stole. The whole thing feels like a throwback to an earlier Waters movie, Desperate Living, in which Peggy Gravel (played by Mink Stole) shouts, “What number are you dialling? You’ve dialled the wrong number!! Tell your mother I hate her”, down the phone. It’s hilarious and I’m glad Mink was a part of this scene and movie as she’s always been my personal favourite of Waters troupe of actors. She’s so incredible and can literally play any role that Waters has thrown at her over the years.

Although he claims he’d stopped doing it by the time he wrote Serial Mom it still definitely feels like he creates certain characters with specific actors in mind to play them as the casting is perfect throughout this. Mink isn’t the only returning actress from the troupe with Ricki Lake appearing in a main role as Misty Sutphin and Mary Vivian Pierce & Susan Lowe appearing in smaller background roles. New cast members included Matthew Lillard, Sam Waterson, and Mary Jo Catlett. John Waters even has a cameo himself as he provides the voice (uncredited) of Ted Bundy.

While the prank calls were outrageous the actual murders and motives for each were brilliantly over the top. After Mr. Stubbins, the maths teacher criticizes her son’s mental health, Beverly resorts to running him over in her car which is only witnessed by a pot-smoking student. Next, when a boy stands her daughter up for a date Beverly spots him with another girl so naturally she follows him into the restrooms and kills him with a fireplace poker. Beverly likes to spend her Saturday afternoons bird watching with her husband so woe betide anything or anyone that gets in the way of that. Her husband is a dentist and when he gets called away to treat Betty Sterner’s husband, Ralph, one Saturday Beverly isn’t impressed, in fact, she’s so far from impressed she heads straight to the Sterner home and promptly murders Betty with a pair of scissors and drops an air conditioning unit onto Ralph.

I suppose if you had to try to justify the early murders of Beverly then you could say that she committed them because someone had insulted her son, hurt her daughter, and interrupted the time she likes to spend with her husband. Beverly is a perfect suburban housewife and mother (killing aside) so I guess it is understandable that she doesn’t want anything to get in the way of the role that is most important to her. Her next murders, however, are done out of desperation to cover her tracks and for absurd reasons. Maybe she just got a taste for it and wanted to see how many more she could get away with?

My personal favourite murder in the movie is the one Beverly commits simply because someone forgets to rewind a videotape they rented from the video store that her son works at. The woman in question, Mrs Jensen heads home from the video store to watch her favourite movie, Annie. As she sits belting out “The Sun’ll Come Out Tomorrow'” while her dog “licks mommies feet” she doesn’t hear Beverly breaking into the house through the kitchen. Beverly creeps in behind her and proceeds to bludgeon her to death with a leg of lamb and as blood spatters up the TV she sings a lyric of the song with each blow that she lands on Mrs Jensen’s head. It ends with her screaming “REWIND”, before making her exit. It’s funny, it’s surreal as hell, and I can no longer watch Annie without thinking of this scene every time I hear the song. The problem with this murder is that there’s been a witness, one who isn’t stoned. Beverly chases the witness and eventually ends up setting fire to him in front of a crowd at a Camel Lips (played by the riot grrrl band L7) gig. This, however, ends up getting her arrested.

The ending of the movie is Beverly’s trial in which she chooses to represent herself due to not being happy that her lawyer wants her to plead insanity. The courtroom scenes are nothing short of genius as Beverly proceeds to discredit every single witness by any means necessary. She tricks Dottie Hinkle into contempt of court by whispering “P*ssy willow” at her, getting Rosemary to admit she doesn’t recycle, opening and closing her legs to entice a neighbourhood pervert into committing perjury, and using a magazine about transsexuals to discredit somebody’s statement. Obviously, she ends up getting away with every murderous act she’s performed but there’s still one thing left to do. Something has been bugging her throughout the entire trial: one of the jurors has been wearing white shoes AFTER Labor Day!! So naturally, Beverly batters her to death with a payphone receiver.

True crime dramas and documentaries weren’t a big thing in 1994 so you can kind of understand people thinking that this was perhaps based on true events, although if they had have been popular at the time then maybe the movie wouldn’t have done so badly at the box office. It ended up being a flop grossing just $7.82 million domestically, which is “A Dirty Shame” (see what I did there?) considering how brilliant this movie is. John Waters cast Kathleen Turner because she was an actress who wasn’t afraid to take risks in her career and she always wanted to do something different that she hadn’t done before.

This is so true and after watching quite a large selection of her movies over the years I can honestly say she’s never portrayed anybody else quite like Beverly Sutphin. The ideas for a sequel are still there but sadly will probably never happen as John Waters has stated in recent years that it “would be too ballsy to talk about a sequel to a movie that didn’t do well. I like the idea, but it’s hard to get meetings”. Can you imagine how many reasons Beverly would have to kill in today’s sociopolitical climate? I wouldn’t put it past her to kill Trump himself, but let’s not go down that road today.