Welcome to What’s the Buzz, 25YL’s feature where members of our staff provide you with recommendations on a weekly basis. In our internet age, there is so much out there to think about watching, reading, listening to, etc., that it can be hard to separate the wheat from the chaff, filter out the noise, or find those diamonds in the rough. But have no fear! We’re here to help you do that thing I just described with three different metaphors. Each week a rotating cast of writers will offer their recommendations based on things they have discovered. They won’t always be new to the world, but they’ll be new to us, or we hope new to you. This week’s entries come from: Anthony Divers, Ali Sciarabba, and Caemeron Crain.

Anthony: This week I’d like to talk about Netflix show The Chilling Adventures of Sabrina. Lucifer blessed us mere mortals with the second part of Season 1 recently, and after watching the last two episodes earlier this week, i cannot recommend the show enough. I’m not ashamed to admit I had a bit of a soft spot for the Melissa Joan Hart version of the teenage witch adventures. I was young, she was funny, and Salem was the saltiest character I’d ever encountered. So when i heard that Netflix was making a version of the show, based more on the comic books, I was intrigued.

Part 1 was a fun trip; seeing this new Sabrina with a darker, more mature twist was exciting to watch. I’m still disappointed with Salem’s lack of air time, but apart from that, it had me hooked. But then along came Part 1, and somehow the whole thing has been flipped on its head. Sabrina is darker, her boyfriend is sexier (Thank you, next Harvey…) and there’s so…much…blood! Part 2 has really expanded the idea of ‘What if Sabrina was a dark witch?’ No spoilers, as tempting as it is to talk about, but things get dark pretty fast. We’re treated to some truly delicious scenes, reminiscent of Evil Dead or American Horror Story, and Sabrina is officially confirmed as the hottest witch in town.

Episodes also tend to vary between fun and genuinely chilling, with some scenes making me raise my eyebrows in shock more than once. Sabrina’s aunts, Hilda and Zelda, also return with more character development and screen time which was a great choice as they both play wonderful parts. Also, horror legends Veronica Cartwright and Ray Wise make fun appearances. What more could we ask for?! I’ll tell you what more, is that cigarette smoking man from The X-Files in a fancy costume!? Yes it is, William B. Davis plays a high priest of the witches council. They really are spoiling us!

Special shout out goes to the wonderful Michelle Gomez, of recent Doctor Who fame, who for me at least stole the show. Her portrayal as Lilith, Lucifer Morningstar’s hand maiden, is just perfection. I’ve loved her as an actress since The Book Club and Green Wing, but her character in The Chilling Adventures of Sabrina is my favourite by far. Her parts in the final episode were just phenomenal, and I’m hopeful for a triumphant return next season. So if you haven’t already watched it, add it to your list. Satan knows you won’t regret it. 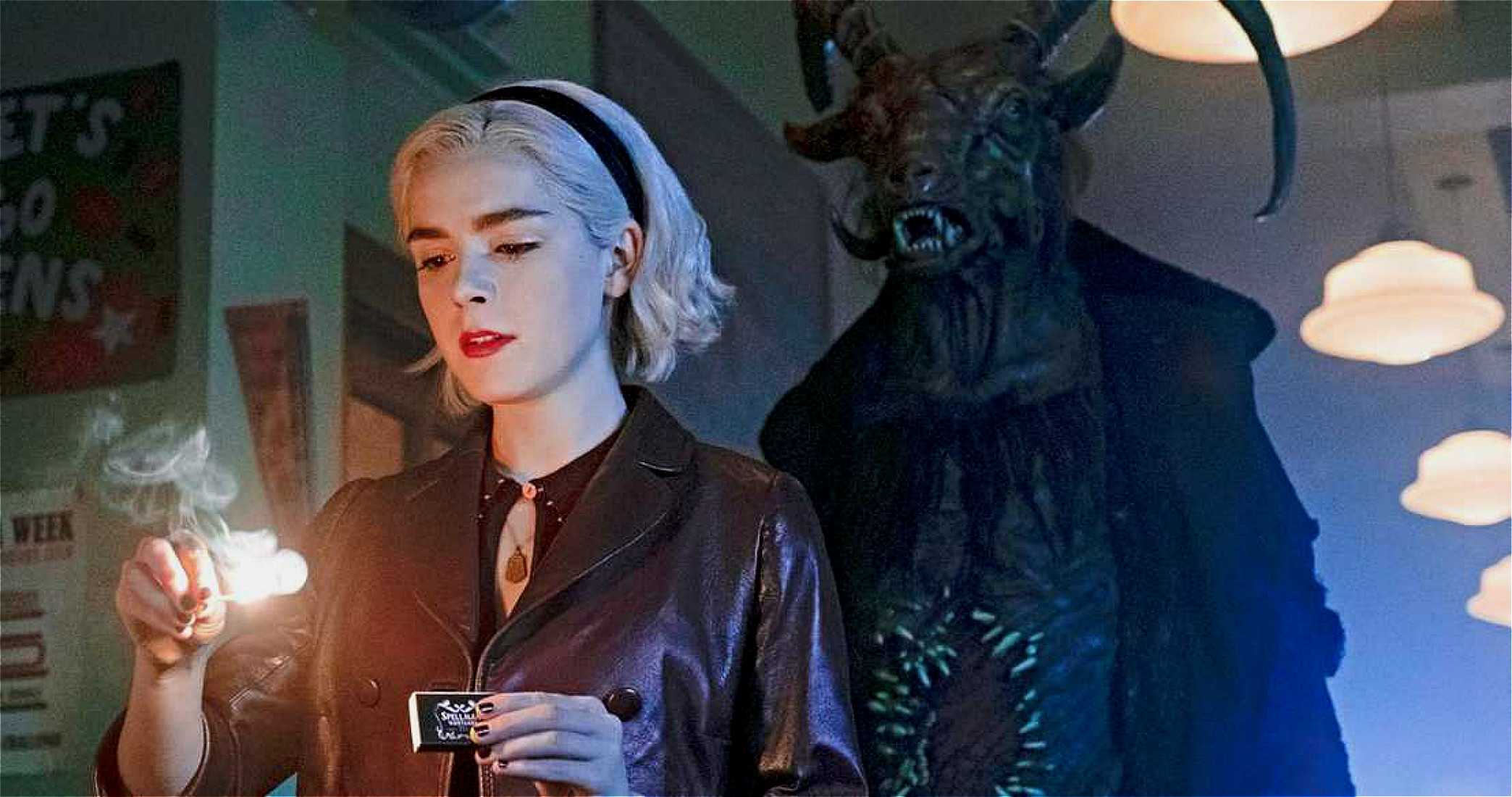 Ali: I’m back again this week to extol the virtues of another McElroy Family product: The Adventure Zone podcast. It’s something I never knew I needed in my life: a group of brothers and their dad playing Dungeons and Dragons together and recording it for the world’s listening pleasure. The first campaign (or arc) of The Adventure Zone, known as “The Balance Arc,” is a 69-episode masterpiece of comedy and storytelling. Youngest brother Griffin is the Dungeon Master and he guides the story, which is played out by oldest brother Justin (as the elf wizard Taako), middle brother Travis (as human fighter Magnus Burnsides), and dad Clint (as dwarf cleric Merle Highchurch).

The Adventure Zone’s “Balance Arc” is a time commitment, I won’t lie. With 69 episodes (many of which are an hour-and-a half to two hours long), it’s definitely something that will take a while to get through. But I assure you, it’s worth it. The campaign starts a bit slow and clunky, which the guys freely admit since they were just getting their legs under them and trying to figure out the story, the game mechanics, and their characters. But even from the beginning The Adventure Zone is laugh-out-loud funny. As it progresses and you grow to know and love the main characters—as well as a great many fleshed-out NPCs (all voiced by Griffin)—the story actually gets pretty deep. Many people, myself included, have cried in between the laughter during certain “Balance Arc” episodes. Oh, and did I mention that Griffin composed incredibly beautiful instrumental music to accompany the later episodes in addition to being a kick-ass DM and writing an incredible story?

If you’re looking for a new podcast to get down on and like well-crafted stories that are equal parts funny and heartbreaking, The Adventure Zone is for you. And once you’ve plowed through all 69 episodes, there is more! The guys are currently in the midst of a new arc called “Amnesty,” which isn’t D&D gameplay—they switched things up and are playing a new RPG, Monster of the Week. I would recommend starting with “Balance” and then moving on to “Amnesty” after your heart has been shattered into a million pieces by the genius storytelling and voice-acting capabilities of the McElroys. Justin really put it best when he summarized “Balance” as “the story of four idiots that played D&D so hard that they made themselves cry.”

The Adventure Zone is available via Apple podcasts as well as at Maximum Fun.

Justin, Travis and Griffin McElroy from My Brother, My Brother and Me have recruited their dad Clint for a campaign of high adventure. Join the McElroys as they find their fortune and slay an unconscionable number of … you know, kobolds or whatever in … The Adventure Zone.

Caemeron: Barry has been on my radar since before the first season started. The idea of Bill Hader as a hitman turned actor (with Henry Winkler as his acting coach) is funny in itself, and knowing that John Pirruccello—who got on my radar as Chad in Twin Peaks—would also be in it made me put it on my list of things to probably watch at some point. And, yet, I did not do that until this week, when I proceeded to burn through the show in a matter of days in order to catch up to where it stands at present.

Barry is so much more than I thought it would be. I imagined the contrast between actor and hitman being played for laughs, and it is, but in a way that is both darker and more thought-provoking than I could have possibly expected. This is a show that explores the human condition: hilarious but also often poignant. I hesitate to even call it a comedy, but “dramedy” doesn’t feel right either (that makes me think of Moonlighting or something like that, which Barry is not).

Perhaps the length of the episodes plays a role here; they tend to clock in around 35 minutes apiece, which situates them right in between the current standard run times for network sitcoms and dramas. But instead of feeling like a half hour show that stays its welcome a bit too long, Barry tends to feel like what others shows would have done in an “hour” (42-48 minutes) compressed into a tight package where nothing feels extraneous. It is similar to how I felt about Russian Doll in that regard.

And it is important that this isn’t a show about a guy who has left killing behind to be an actor, nor one about a killer who decides to take up acting while still being a killer, so much as a story about a guy who wants to get out and his struggle to do so. I’m not even sure he wants to be an actor so much as he is smitten with Sally (Sarah Goldberg)—who wouldn’t be?

The acting class scenes are used brilliantly to explore what Barry is dealing with, and how. As Gene (Henry Winkler) encourages the class to “find their truth” we find Barry at times sharing his literal truth only to be taken to be improving, or fudging that truth because it really cannot be shared. More than anything, that’s what this show is about: Barry struggling to determine who he is/wants to be while grappling with his past, including his time as a Marine. To kill at war is one thing, but to kill civilians is another. Or is it? Perhaps killing is killing; a job as a soldier turned into a job as a hitman. This is what Barry’s good at.

Or take it in the other direction: perhaps it is just as wrong to kill in war as it is in everyday life? This isn’t something I expected Barry to explore, but the more I watch the more it seems like a rather central question. After all, we root for Barry from the beginning; he is easy to identify with and like, both because of his disposition and because is super competent. You’ve got to respect that.

But what are we rooting for Barry to do? Often it is in his self-interest to murder. Do we want him to murder? Perhaps we want him to get away from that life and be happy with Sally. But, then, maybe some murder in order to get there? From the beginning, he is caught up in a thicket of existential difficulties, and we should be too if we’re watching this right.

Also, though, why didn’t anyone tell me that Anthony Carrigan is in this show!? He is amazing. If you, like me, think that his portrayal of Victor Zsasz in Gotham is the best thing about that show, just wait until you see him as NoHo Hank! The character is actually rather similar, but somehow better, as pretty much every line Hank utters makes me laugh, including just the way he says “Barry”—his whole thing may be my favorite thing about the show, which is saying something given that the whole cast is amazing. The fact that I somehow haven’t mentioned Stephen Root is an oversight.

So, if like me until this week you’ve heard about Barry but have yet to check it out, you should bump that to the top of your list immediately. The humor is dark, so it may not be for everyone, but I think this is one of the best things currently airing on television. I’m putting it in the hallowed air of something like Mr. Robot, so go give it a watch and let me know if you agree.

Those are our recommendations this week! What would be yours? Let us know in the comments and/or on social media.

More From: What's the Buzz