Joe Berlinger (Paradise Lost trilogy, The Ted Bundy Tapes) knows a thing or two about the true crime genre. He helped invent the rule book on the modern true crime documentary back in the 90s. Just don’t use it to describe his new Ted Bundy biopic Extremely Wicked, Shockingly Evil, and Vile. The director has made it clear from the get go that Extremely Wicked… would tell the Ted Bundy story through the perspective of Elizabeth Kendall (Lilly Collins), his girlfriend from 1969 to sometime after his arrest in Utah in 1975. By telling the Bundy story—which is extremely familiar ground by 2019—through Elizabeth’s perspective, we see the story in terms of emotional abuse done to women and the power that male abusers hold over their victims. Extremely Wicked, Shockingly Evil, and VIle is a victim’s advocates’ film, but I doubt it gets heralded as such.

When people hear Joe Berlinger’s name, they immediately think “true crime,” though his work is more varied than that. There is no denying that he helped create the modern template that has become so popular with audiences today. The Paradise Lost trilogy chronicled the arrest, trial, and 17 year incarceration of three teens convicted of child killings based on their taste in black and thrash metal, gothic fashion, and gory horror films. The trilogy ended with their release from prison.

Berlinger, an Academy Award, Emmy, and Peabody winner, has also already covered the Ted Bundy case with the Netflix docuseries earlier this year The Ted Bundy Tapes. Through actual unseen footage and the killer’s own words, the trial story was hashed out in detail. At the time, it felt tedious but after seeing Extremely Wicked, Shockingly Evil, and Vile it makes a nice companion piece for the few armchair detectives out there in the world that want to dive into the actual case files of Ted Bundy but have yet to do so. How would a feature film fare though? Joe Berlinger’s only other narrative full-length film, Blair Witch 2: Book of Shadows is loved by me shamelessly but I don’t remember it winning people over.

With everyone today having an endless thirst for true crime, news that Joe Berliner was making a Zac Efron (High School Musical, Neighbors) starring Ted Bundy biopic piqued interest but also turned some stomachs. Was the world about to fall in love with Ted Bundy? That’s kind of a trick question. America has already fallen in love with Ted Bundy and serial killer culture by and large whether we want to admit it or not. At the very least there is a large subculture that finds anything labelled “true crime” fascinating and wants more of it. Etremely Wicked is something else though. Joe Berlinger uses Elizabeth Kendall’s memoirs of her years living with Ted Bundy as his girlfriend to tell a story of emotional abuse of the highest order.

By placing the perspective almost squarely on Liz, the audience is forced to see Bundy and try to accept Bundy as she saw him knowing what we already know about Ted Bundy. This may be an understandably impossible task for some people, but if you can hang with it, Lilly Collins (Okja, Tolkien) gives a performance that will strike a chord with anyone that has ever been stuck in an abusive relationship, controlled by a charming lying psychopath.

Extremely Wicked, Shockingly Evil, and Vile opens with the Goethe quote “few people have the imagination for reality.” I felt that quote summed up a lot of what the film really is about. It’s actually not quite accurate to even call this Joe Berlinger’s Ted Bundy film. Elizabeth Kendall, or Liz, is the main character and this is her story of living with, struggling with, being consumed with, and eventually coming to terms to deal with her abuse. She’s in some ways the victim that suffered the longest from Bundy’s blatant egomaniacal psychopathy. Did Liz suffer the way that over 30 known women suffered? No, of course not, but she was abused nonetheless.

I saw so many people already writing Extremely Wicked, Shockingly Evil, and Vile off as boring or not something that was worth people’s times largely because it doesn’t focus on the actual murders. That story has been told time and time again. It’s already out there. Kendall published her memoir back in 1981 and then basically went on with her life until this project came along. If people can get over there wish fulfilment of Zac Efron as a ‘Patrick Bateman’ American Psycho like Ted Bundy and realize this is a story about actual people and not a construct of commentary from Brett Easton Ellis’s mind, only then can we ever properly talk about this movie.

Back to the Goethe quote that I think sums up Liz’s struggle throughout the film. For so long, despite all evidence, she refuses to accept the reality that Ted, the man she loves, is a vicious serial killer, Ted doesn’t have the imagination to accept reality either, but he destroys other people in order for reality to momentarily make sense whereas Liz, by proxy, lacks the imagination to see him for what he really is. And that isn’t her fault. There really aren’t that many of us that have the imagination to deal with the real world. Most would rather live in a dream world of some kind. We all have things we refuse to accept that would actually save us if we just dealt with it and moved on. The only difference between us and Liz Kendall in that regard is Ted Bundy. 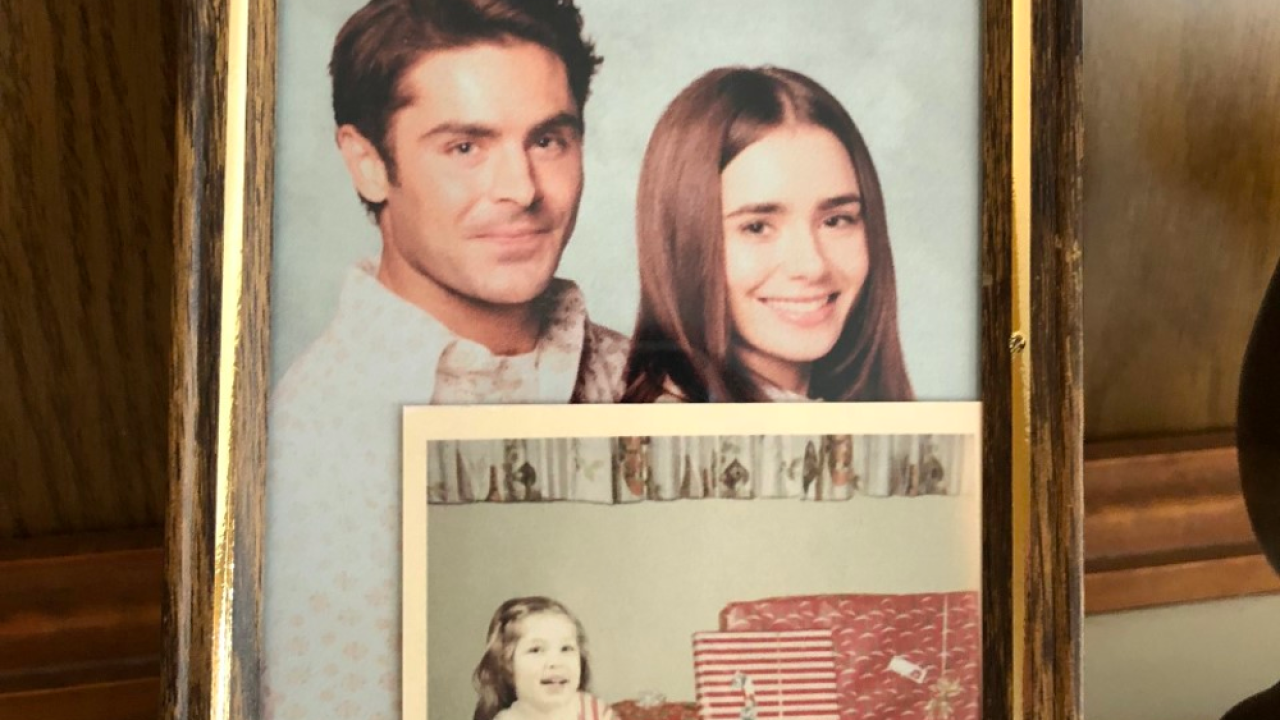 The production design and costume design of Extremely Wicked, Shockingly Evil, and Vile is Oscar worthy. So many infamous images of Bundy in court or in interviews re-created in the film could have come off like a bad tv movie, especially since Bundy was so charismatic himself, but the production design combined with Efron, Collins, and the entire cast’s effective performances transport us right to the middle of the action. The supporting cast really helps pull this crime drama off too: John Malkovich (Being John Malkovich, Birdbox) as the judge presiding over Ted’s murder trial, Jim Parsons (The Big Bang Theory) as the DA, Dylan Baker (Happiness) and even Metallica front-man/guitarist James Hatfield in his acting debut as the arresting officer in Utah.

Extremely Shocking uses old home video footage during the early to mid-70s of the happy Liz, Ted, and Liz’s little girl living and loving life together like any normal American family, overcut with actual news reports of missing girls in the area and reports of a killer lurking in the shadows. These were some of the happiest moments of Liz’s life at the time. She was happy with a burgeoning attractive young all-American law student that was playing father to her child and husband in everything but name to her. After Ted is initially arrested, Berlinger really starts to showcase how he manipulated and used Liz’s emotions to keep her on his side, in the dark, and under his influence.

It’s a scary thing to watch Bundy charm his way through life,  lying to Liz and everyone that gets in his path with a quiet sense of restless, seething, hungry energy just beneath the surface. There is a palpable sense of dread that just builds throughout the entire film as something nags at Liz, something yelling there is something off about Ted, especially after his initial arrest in Utah in 1975. At the same time, she is still in love with him and can’t deal with the reality of the situation. By refusing to do so, she feels guilty for not speaking out and sinks into alcoholism, depression, and isolation. Liz Kendall feels responsible for Ted’s actions.

Joe Berlinger has made a movie about Ted Bundy that somehow manages to be quietly effective instead of exploitative. Through the recreation of footage that is already burned into our collective consciousness, brought to life by the brilliant production design and the performances of Zac Efron and Lilly Collins, Extremely Wicked, Incredibly Shocking, and Vile only needs one moment of actual violence in a final moral confrontation between Bundy and Liz. I love a gore filled serial killer film as much as the next. I have a bigger problem with Zac Efron celebrated as the actual mass murderer of real women Ted Bundy. Joe Berlinger doesn’t just not celebrate him, he completely denounces him by making a film about a woman’s trauma and eventual triumph over him. The world will never not know the name Ted Bundy. Extremely Wicked, Shockingly Evil, and Vile has the imagination to tell a different story.