The first five episodes of the new Twilight Zone have stayed primarily Earthbound and metaphorical, examining myriad topics such as ambition, paranoia, systemic racism, and gaslighting, to name a few. The sixth episode takes us into outer space, far away from our familiar planet, and probes a concept much more insular and literal than the previous entries: the fragility of the mind.

“Six Degrees of Freedom” is the first episode of this reboot where the plot device itself is less of a character and more of an introduction to our human companions. In fact, the set-up of the episode is played so blatantly that the viewer thinks they are going to predict the inevitable twist within the first few minutes (a clear homage for fans of the original Twilight Zone episode “I Shot An Arrow Into the Air,” which shares much of the same plot machinations as this episode). In true Twilight Zone fashion, though, nothing is as it seems. 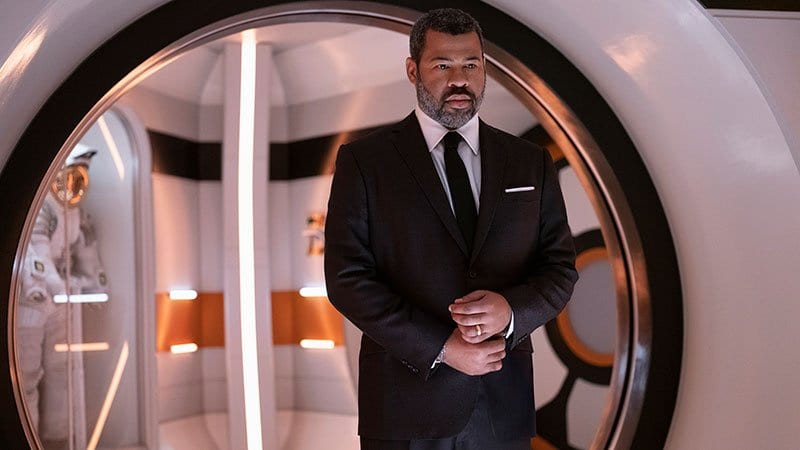 Like other episodes of this particular reboot (such as the chaotic “A Traveler”) the build-up, despite its cleverness in counter-deception, leads to a slightly underwhelming twist. If there is one thing this reboot of the Twilight Zone has struggled with, it is providing a satisfying conclusion. With the exception of the nearly perfect allegorical ending of “Replay,” the remaining five episodes have had closing scenes that appear redundant and/or nonsensical.

While the end of “Six Degrees of Freedom” isn’t too offensive on the logic end, it certainly is abrupt and a bit counterintuitive. Most of the excellent Twilight Zone episodes, both past and present, were about the journey and the destination. This episode does a fantastic job of showing us a very real journey but almost forgets that there is a destination, tacking on an ending that destroys the realism the episode spent the previous 50 minutes building, albeit in a clever way.

Five astronauts have trained for nearly half a decade to begin the colonization process of Mars. Since Earth’s depleted resources and rising threats of war have already put the planet on the road to extinction, only a metaphorical restart button on another planet can save humanity’s dim future. Led by Commander Alexa Brandt (DeWanda Wise), the small crew are sitting on the launch pad ready to begin their 200-plus-day journey to Mars, where they will prep the planet for further colonization efforts over the next four years.

But right before liftoff, mission control advises the crew that there have been nuclear attacks across the United States that have destroyed major cities. The U.S. is sending counter-strikes to Russia and North Korea in retaliation. The crew has to decide to continue their mission, as the planet is likely to become a radioactive wasteland, or return to Earth and find their families before dying themselves.

With the exception of the emotional Rei (Jessica Williams), the crew agrees to continue their mission thinking that any remaining survivors will have the hope to live again if there is a colony waiting for them on Mars. In order to continue onward, the main viewport must be closed to protect from radiation, meaning the crew only has external cameras to see what’s going on outside.

As the days pass and the countdown to arrival ticks down, the crew grapples with the mundanity of space travel along with the depression of realizing they have nowhere to go when the mission is over. Essentially, they made the choice to die slowly rather than to die right away. Brandt tackles command, trying to keep everything as normal as possible. Rei rebels by attempting communication with Earth (against Brandt’s orders) as well as seeking sexual release from shipmate/pilot Casey (Jonathan Whitesell). Medical crewmember Katherine (Lucinda Dryzek) tries to become the “mother” of the group, keeping everyone calm, sane, and peaceful.

And then there is Jerry (Jefferson White), a brilliant scientist who begins to crack as time goes on. He starts to suspect this mission, plus the improbable possibility of a nuclear attack just minutes from their launch, is all fake and the whole thing is a government test of endurance. While his sanity is surely in question based on his erratic behavior, the crew has an inch of hope that maybe he’s right. 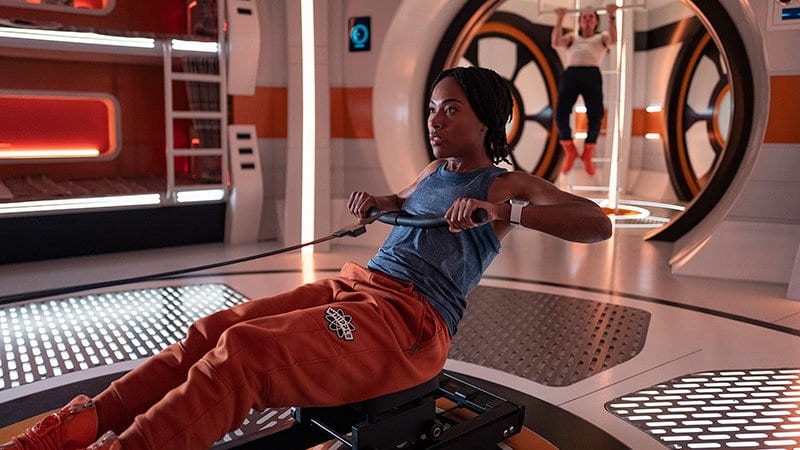 I’ve usually commented on the technical aspects of this Twilight Zone reboot in other reviews but it is kind of pointless from here on out. Visually, from the cinematography to the art direction, this reboot is pretty much flawless. For our first episode outside of the confines of what we see in everyday life—such as airplane cabins, meeting rooms, country roads, etc.—the budget is going to allow for the now-confirmed second season to push boundaries and continue to tell stories outside of Earth.

That said, this kind of story doesn’t really need that much set dressing. Since the moral conundrums and physical activity all take place in one space, which consists of four or five sub-rooms that aren’t even closed off by walls, the attention to detail on the technical side is a nice bonus. What really makes the episode tick is the acting and, just like an older episode made in the ’50s, I could have watched this story unfold on a bare-bones set, just like a stage play.

As I mentioned above, the story beats carry all the expectations of predictable lost-in-space narratives or, more specifically, the “I Shot An Arrow Into the Air” episode. The screenwriters, Heather Anne Campbell and Glen Morgan (who also wrote “A Traveler”), do their best to deliver twists upon twists built mostly on expectations.

The two biggest “twisty” moments are the opening of the viewport window and the death of Jerry, which are linked. As soon as the viewport window closes in the first few minutes of the episode, any viewer of the original series thinks back to “I Shot An Arrow Into the Air,” when astronauts crash land on what they think is another planet, kill each other, and the lone survivor goes outside to find out they all crashed on Earth and help was literally just steps away. “Six Degrees” is openly baiting you to expect that, when all is said and done, the window will open to reveal the friendly, un-nuked fields of Earth and that all the strife and conflict was meaningless. In comes Jerry.

The death of Jerry is a fun deception purposefully written to steer you towards common expectations and outcomes. Jerry was the obligatory “going-crazy-in-space” character who predicts that all of the goings-on we’ve witnessed are an endurance test and there really is no danger. He tests his theory by opening an airlock he’s standing in and is met with the cold vacuum of space (as well as a nasty solar flare). His death was a continued build-up of the fake-out possibility the writers put in our heads.

The remaining pilots knew Jerry was going crazy and proceeded to Mars where, upon releasing the viewport window, they find out they actually made it—they landed on Mars. There was no test; there was no fake-out. However the characters who were hoping it was all fake in some way now face the harsh realization that Jerry was wrong. Earth has been nuked to hell, and they will die on this red, dusty world without rescue. 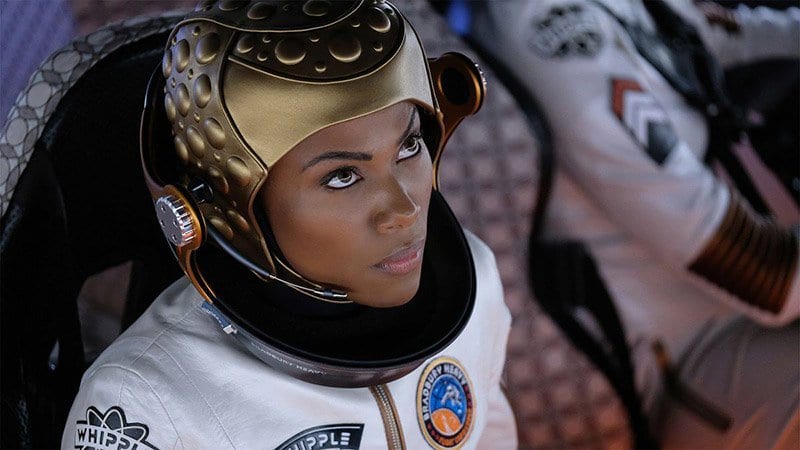 At one point in the episode, Jerry brings up the concept of “The Great Filter,” which posits that the test of true intelligence is the question: can an advanced life form make it to another planet before it destroys itself? Jerry’s death shows that perhaps humanity isn’t ready, while the remaining astronauts who do survive and land on Mars show that, even with Earth in ashes, humans did actually conquer “The Great Filter.”

This is where the sub-twist comes in. We find out Jerry didn’t die at all when he was ejected into space. He wakes up in a strange (and gooey!) ship at the episode’s very end, hearing what is most definitely aliens explaining that Jerry was the true intelligence for figuring out that the crew was being monitored/tested by the aliens and that humanity may be worth saving. The aliens then decide to make contact with Earth and, presumably, save them from their own destruction.

I like this particular angle as it once again builds off of expectations. In these lost-in-space stories, you always expect someone to go crazy and they usually die. The fact that the crazy one is also pointing out the possible ruse with the viewport window is a nice touch, too. But unlike most of these stories, the crazy one actually ends up being the hero instead of the “sane” ones who completed their mission.

In my opinion, the idea of the aliens is a bit, well, dumb. What this dialogue-heavy character study did for 50 minutes was provide a hard sci-fi approach not only to the end of civilization on Earth but how humans survive, interact, and continue on when given the opportunity to live despite limited options. 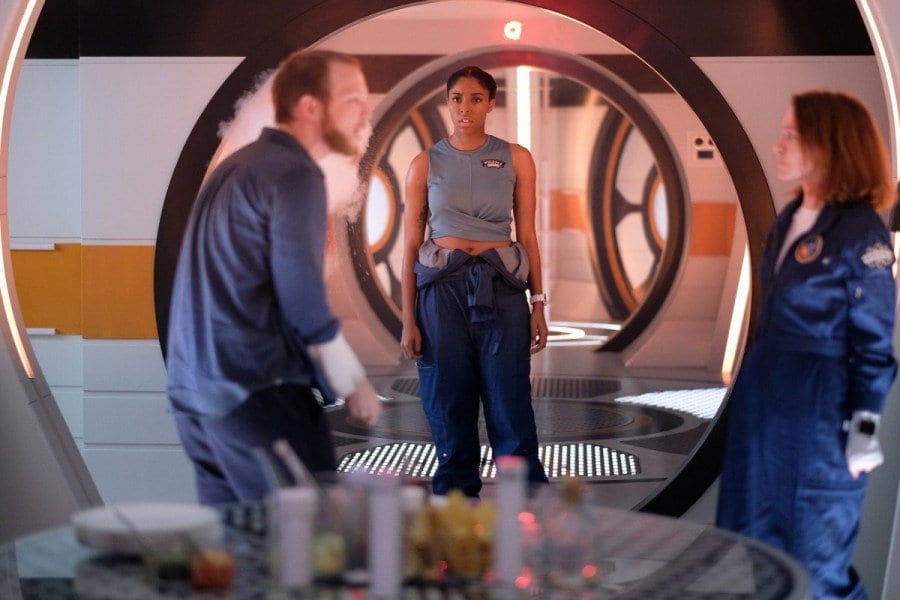 Ending it on an alien note is off, tonally. I don’t necessarily object to the idea of aliens being used but springing it on us without prior precedent is a bit off-putting. I feel that sometimes the show thinks it has to provide that epic twist or else it isn’t The Twilight Zone. Twists are fine, of course, but the one at the end of “Six Degrees of Freedom” is too jarring. The episodes should take notes from “Replay,” where the ending is subtle and emotionally impactful without resorting to gimmicks.

That said, the rest of the episode leading to this ending is perfect. I’m a sucker for philosophical debates on existence and “Six Degrees” delivers that in spades. The action is limited and the setting is claustrophobic. By stripping allegory away from the script and focusing on more three-dimensional characters struggling with a seemingly impossible scenario, we connect on a more personal level than in previous episodes where the characters were surrounded by more magical scenarios.

I’m hesitant to call this the best episode of this reboot’s run but its fresh approach and intention to go small make it a compelling watch, even if the ending tries to unravel all it has built.