‘Film25YL: The Hudsucker Proxy’ is now available on Audio, read by author John Bernardy, exclusively for our Patreon supporters. For just $3 a month you will have access to our full library of Audio content, plus three new uploads every week. To sign up visit our Patreon page: https://www.patreon.com/25YL

The Hudsucker Proxy was not a success at the theaters in 1994. Honestly, I didn’t even hear about it at the time. A silly little movie about a hula hoop with a charm anchored in a simpler time was getting covered over in a landscape dominated by goth juggernaut The Crow and the hyper-violence of Natural Born Killers. But it wasn’t frivolous, or even underwhelming. It was just a little bit out of step with what was “cool” at the time. It got skipped over.

The nostalgia that captured the world at the time was the ’70s. High schoolers were just as obsessed with Led Zeppelin as they were with Nine Inch Nails. The Eagles were even back together, for God’s sake (for the appropriately titled Hell Freezes Over tour). In film, this kind of ’70s nostalgia was best exemplified in Pulp Fiction. The no-swears-in-site 1958 of The Hudsucker Proxy was timeless but it was also out of step with everything else capturing box office dollars.

Thanks to the Coen Brothers’ stellar reputation, people have come to this film later as they go through the Coens’ filmography. That’s how I found it: in the late ’90s after Fargo was already out of theaters. And boy was I glad I did. 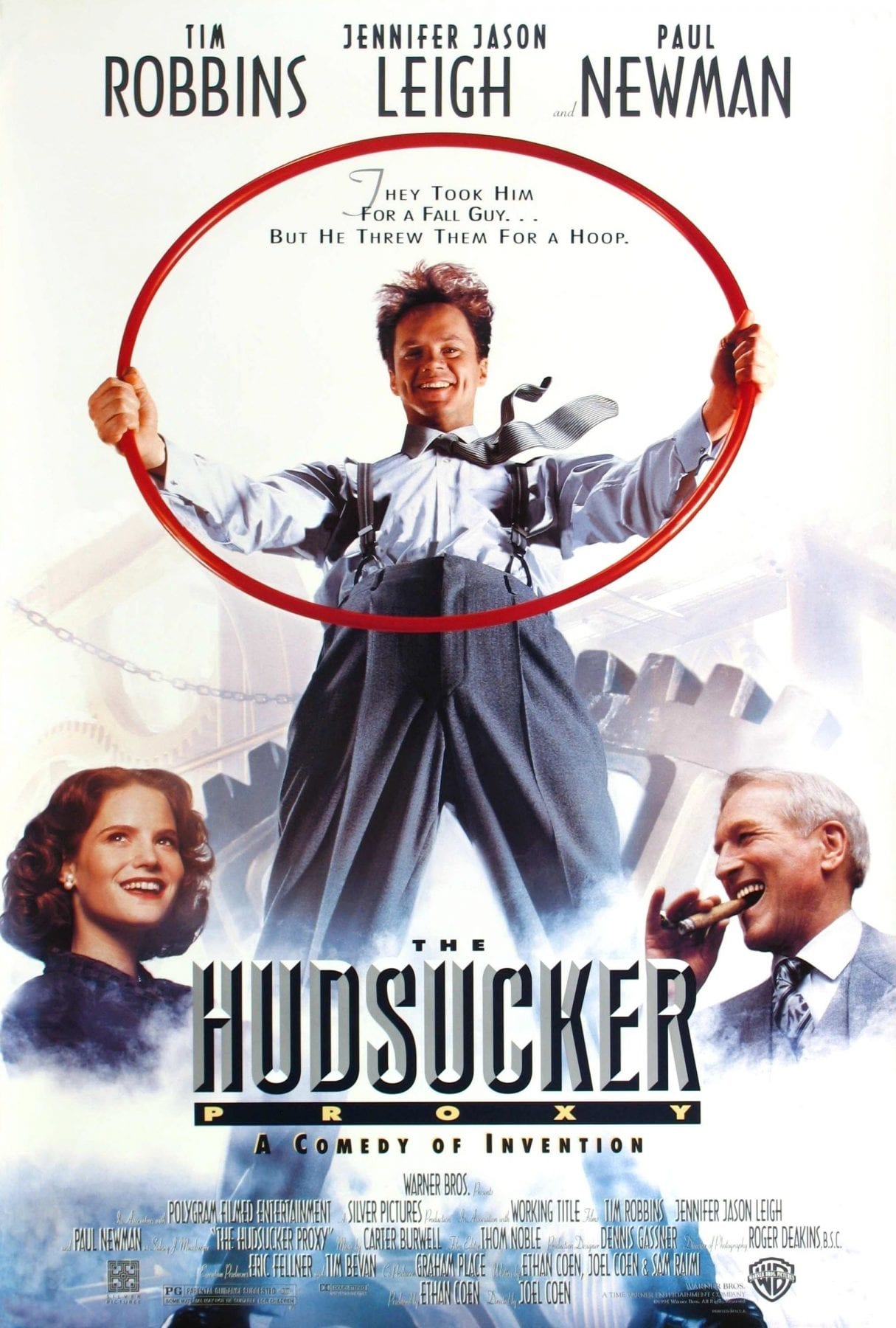 Charm is all over this movie, and it’s aged well. Now that the movie doesn’t have to live in 1994, it can be properly timeless. The snappy ’50s dialogue and the old noir style of line deliveries own me. And there are refrains that make me smile every time I hear them. Paul Newman’s Sid Mussburger saying “sure, sure”. Tim Robbins’ Norville Barnes saying “you know, for kids” every time he shows someone a drawing of a circle with zero further context. His mailroom boss saying if anything goes wrong, “they’ll dock ya!” Jennifer Jason Lee’s Amy Archer confidently betting her Pulitzer on it.

The Coens’ and Sam Raimi’s dialogue is crisp throughout and loaded with wordplay. Yes, Raimi is the third screenwriter on this movie, and they began writing this in 1981 after Evil Dead and Blood Simple were made. Honestly, the fact that the team began the story when they did, explained why the story was out of sync with its year of release. In the ’80s we saw a full obsession with the ’50s, and Twin Peaks is one of the best—and last—examples. But by 1994 there wasn’t much need for another such throwback.

Hudsucker’s story follows a story path not unlike It’s a Wonderful Life. The hero at the beginning appears to be contemplating suicide on the ledge of a building’s top floor, and we get a flashback that begins Hudsucker Proxy’s story in earnest.

Unlike It’s A Wonderful Life’s George, Norville didn’t choose to commit suicide and comes around to choosing a second path, he’s just given one. Near the end of the movie, he’s chased by a mob—due to some lies involving elevator operator Buzz—and he goes to his office after hours alone, and thinks about jumping but absolutely decides not to. He bumbles into falling over the edge when Aloysius the imposing Janitor closes the window on Norville and traps him out there.

The only thing that saves Norville after he falls is Moses the clock man jamming up the gears of the Hudsucker building’s clock with his broomstick. All time stops, including Norville’s fall. “Strictly speaking,” Moses says straight to the camera, “I’m never supposed to do this, but do you have a better idea?” It’s that kind of sense of humor in this movie, and I’m all for it.

We get Charles Durning himself, as an angel version of Waring Hudsucker floating down to Norville so they can have a chat about the Blue Letter Norville should’ve given to Sid Musburger in the first place, thus making the events of this movie moot.

It’s like Hudsucker Industries itself was Life’s George and saw its darkest timeline occur over a few months of its hula hoop fad, and its founder comes back as the angel and saves it. Waring Hudsucker let success be his identity, played the great man, and watched his life become more and more empty as a result, culminating in the only woman he ever loved deciding to marry the ultimately ungrateful Mussburger instead.

That’s why Hudsucker jumped out the window in the first place, in a classic comedic scene near the beginning of the movie. He gets up in the middle of a board meeting, climbs up on the absurdly long table, and takes a run down its entire length until he jumps right out the window. 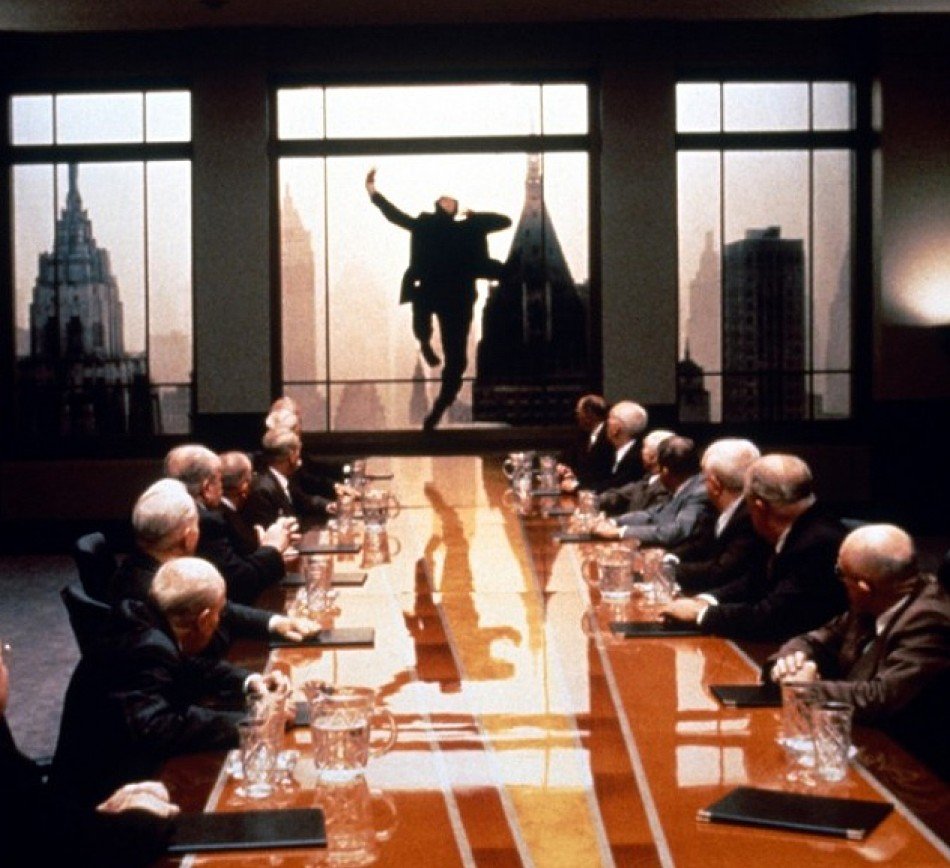 And that’s the exact moment our doofy patsy Norville enters the building. He gets a gig in the mailroom, gets a Blue Letter, heads all the way up the elevator, and right after he gets fired by Sid, he proves himself enough of an imbecile with that drawing of a circle, that Sid knows this is the guy who can plummet the Hudsucker stock into the ground. He and the board can buy the shares later for cheap, and everyone currently in power will make a mint. 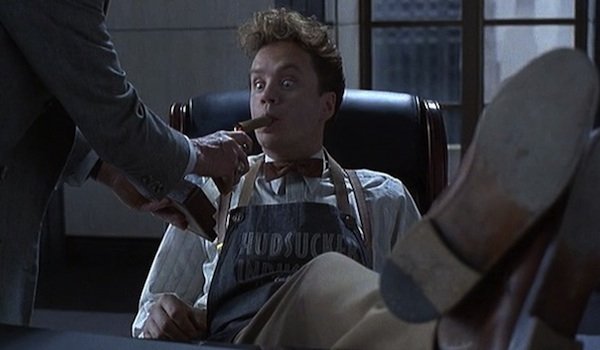 Except Amy Archer isn’t having it. She smells a rat and she’s going to find the answer. She’s every classic pre-Margot Kidder Lois Lane trope ever. She talks just like Katherine Hepburn and is positively a delight every time she’s on screen. I find Amy so damn endearing that I named a character in an unfinished book after her. 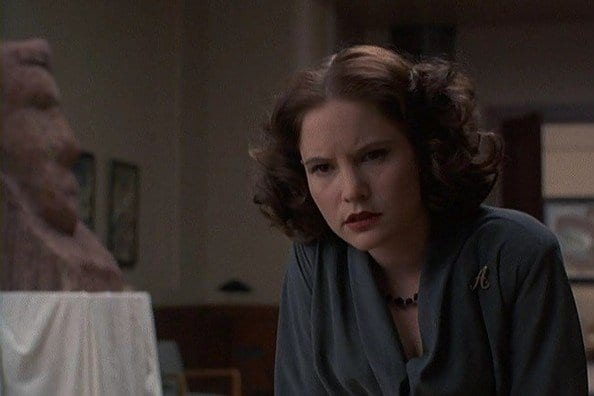 She’s a fast-talking career gal who can tell that Hudsucker Industries is using Norville, and she figures out the whole thing, she just can’t prove it in time. And she likes Norville more than she’d ever expected. She likes his heart and knows he doesn’t deserve to be used. She even ends up liking his inventive spirit. She’s genuinely happy when that circle of his turns into a nationwide fad. 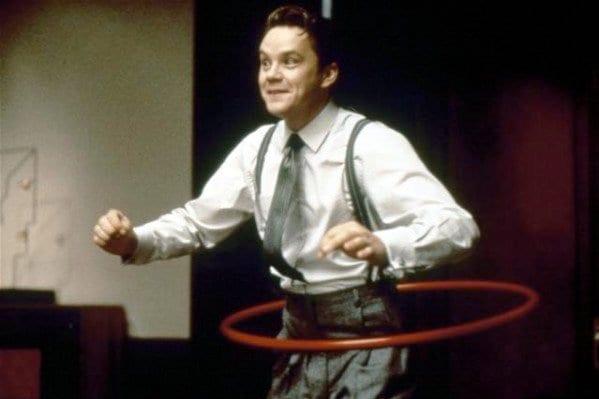 We get more corporate satire with the saga of the hula hoop’s entire product cycle. It goes from a sample to specs for mass production, to a branding team looking for the perfect name. It gets produced, shipped to stores, the price goes down and down until the store owner throws them out. Then one hoop rolls impossibly down the street until one kid gets one and uses it like a champ. And then all the kids have to have one. 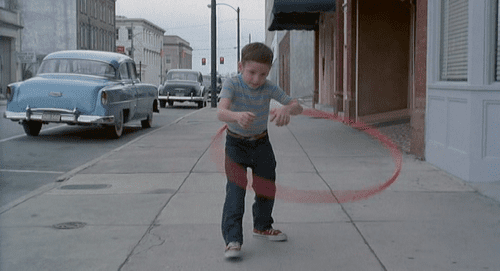 Then everyone’s hula hooping, even getting married while doing it. Norville’s big ideas are starting to feel stale, but he’s too busy living the posh life now to notice.

Amy’s one of the few people who calls out Norville when the success goes to his head, but it doesn’t pull him out of the clouds enough. Add to that her story of being a Muncie girl—look up the fight song Norville and Amy participate in together, it’s classic!—backfires when Norville’s told she’s really a reporter out to get Hudsucker “the whole time.” The two are on the outs in a classic Cary Grant movie kind of way. And it takes Norville’s 44-story fall at the end before he realizes how important she is to him.

Their story is cute as hell, and I’m a giant sucker for it even though they’re more archetype than characters when push comes to shove. But I love this little movie that could. 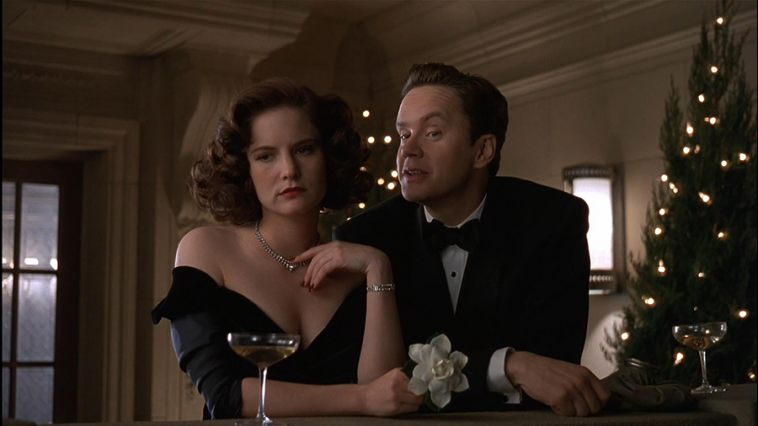 Tim Robbins is a perfect doe-eyed optimist and is funny as he becomes the faux-pompous successful version of Norville Barnes. Paul Newman is amazingly sharp as fast-paced, cigar-chomping business-first Sidney Mussburger and he’s so much a presence I can’t believe he wasn’t in as much of the movie as I remember him in. Jennifer Jason Lee twitterpates as Amy Archer commands her way through everything. You get Bruce Campbell as Smitty, the only other reporter with a ton of lines. You get John Mahoney—Frasier’s dad—as the newspaper Chief who can go toe to toe with Amy. Steve Buscemi is even a classic beatnik bartender. And Charles Durning isn’t in more than two scenes as Waring Hudsucker but he sure milks his time for all it’s worth.

Just like It’s A Wonderful Life, this movie is kind of cheesy and really uplifting, and its pacing is pure clockwork to a satisfying ending. It’s basically a story that says have fun, find your inventive spirit that makes your eyes sparkle, and don’t get greedy. And if you’re lucky you might even find yourself a Muncie girl.