Every so often a film comes along that blows you right out of your combat boots. Jenn Wexler’s first feature as writer-director, The Ranger, manages to do that and then some. Part ’80s slasher, part youth subculture movie, the film fires on all cylinders for a little less than an hour and a half. It is a visual delight which begins in a punk rock comic book world full of dirty neon colors and then transitions into a barren woodland hellscape that contains a frightening realism. The transition could be jarring in less capable hands but The Ranger is a seamless thriller thanks to Wexler’s expert direction. Remember that name because—if The Ranger is any indication—you’ll be hearing it for decades to come.

The Ranger starts off with a shotgun blast. In a brief flashback,The Ranger (Jeremy Holm) sits with a young Chelsea (Jete Laurence) on an idyllic mountainside while waxing philosophically about wolves and mythology. Everything about the flashback has the comforting familiarity of good old fashioned Midwestern American values, but something is seriously off with this entire scene. Police soon come to whisk little Chelsea away from whatever danger the park ranger had saved her from. With a smile and a frightening twinkle in his eye, The Ranger tells her to never forget that she herself is a wolf and to definitely never forget him. 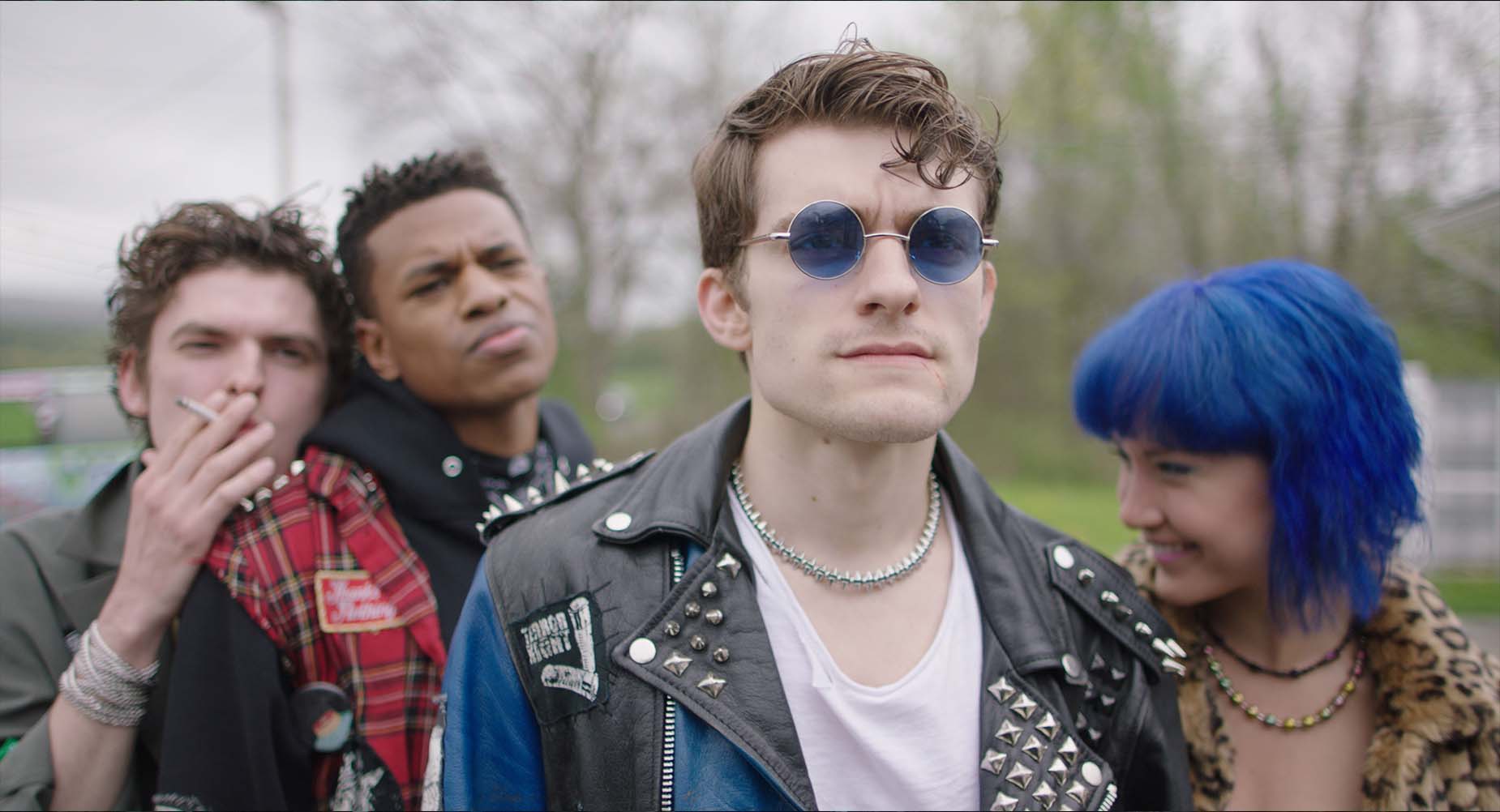 Fasten your seat belts because it’s going to be a crazy ride. The film cranks the punk rock up to 11 and introduces the audience to Chelsea in the present day (Chloe Levine) as a young adult living in the punk culture. She squats with her boyfriend Garth (Granit Lahu), and couple Jerk (Jeremy Pope) and Abe (Bubba Weiler). Anyone who grew up in the punk scene will ultimately feel like they know each and every one of these authentic, fleshed out characters.

As a band rages in a warehouse where Chelsea and the punks crash, boyfriend Garth has just scored a huge amount of a drug all the punks are using called echo; seems to be like a mix of speed, opiate, and hallucinogen all rolled up into one. The night is filled with snorted lines of pink powder, flashing lights to mask the bodies smashing against one another, and general anarchic chaos and mayhem.

Unfortunately the cops come up and break up the party. In a really stupid decision, Garth stabs a cop with a switchblade he was showing off earlier. They steal their friend Amber’s (Amanda Grace Benitez) van and hit the road on the run; all the while in need a place to hide out until things blow over. Chelsea luckily has a cabin in the woods that was left to her when her uncle (Larry Fessenden) died years ago. Chelsea claims at one point to the other punks he was eaten by wolves. One thing is for sure, something happened out there and it all goes back to that day with young Chelsea and The Ranger. Looking back, the punks would have been better off with the cops.

The punks head off to Chelsea’s cabin without any real plan, but they do have plenty of echo, beer, and other drugs. They’re about to run back into Chelsea’s old “friend” from childhood though. The inherited cabin is on national park land and therefore under his jurisdiction. Let’s just say The Ranger takes his job very seriously, is very good at it, and more than enjoys doing it. 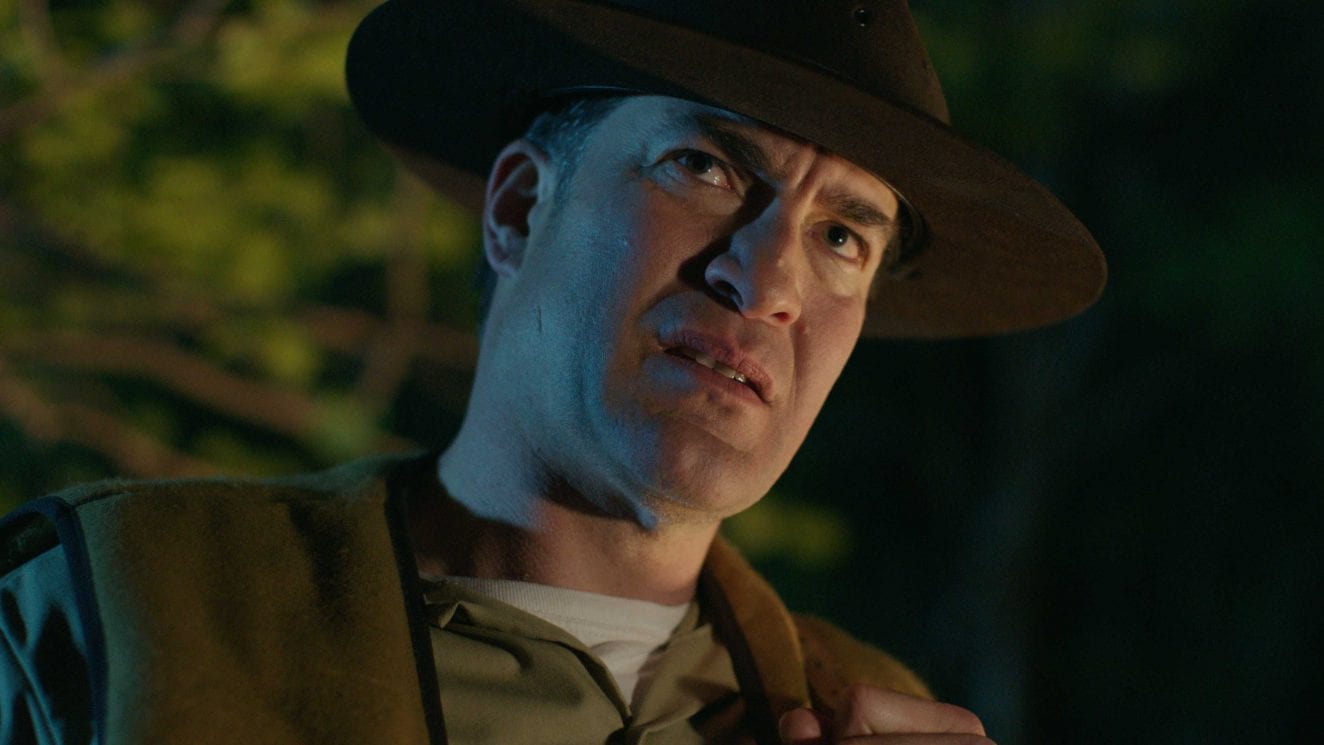 The Ranger is a film that deals in opposites. During the first half of the film in the warehouse squat, at the show, and with the punks on the road in their “punk mobile” (a beat up old minivan covered in spray paint), the soundtrack is full of loud fast heavy music as Jenn Wexler is telling the story from the punks’ point of view. As the film moves on into more straight slasher territory, the music switches to an ’80s John Carpenter sounding score. The Ranger is always constantly listening to the country ballad “The Most Beautiful Girl in the World.” According to the director, whoever is more on top in the film: the punks, the action itself, or The Ranger will dictate what music is being heard at that time in the film.

An initial run in with the titular ranger on their way to the cabin shows he doesn’t (or does he) recognize Chelsea as the little girl he once proudly called a wolf all grown up with her dyed pink hair, studded leather jacket, and gang of alien misfits. That doesn’t last long though and he seems both very pleased to see her return to her uncle’s cabin and also completely disgusted with the appearance of her and her punk rock friends.

In another example of opposites, the punks must truly seem unnatural to The Ranger himself. Both girls have dyed hair (Chelsea’s pink, Amber’s blue) and all four punks dress in fashion that screams out the type of individuality only punk fashion allows. They’re all studs, leather, boots, and thrift store finds like leopard print jackets.

Jeremy Holm’s Ranger is a Norman Rockwell painting come to life mixed with the humanity of the BTK Killer. His very presence on screen is a frightening force of nature; he doesn’t come off like a 9 to 5 guy. The Ranger definitely takes his work home with him. He can quote national park code violations to the letter. He lives in the park itself in the watchtower, keeping an eye on whatever he wants. He abhors littering; the look on his face when Garth drops a wrapper in front of his face is one of pure, tortured disgust. He’s also an extremely efficient serial killer. The punks and their “unnatural” look are an affront to the park ranger’s idea of being at one with nature and he will kill each and every one of them just to wipe them off the earth—to get them off of “his mountain.” 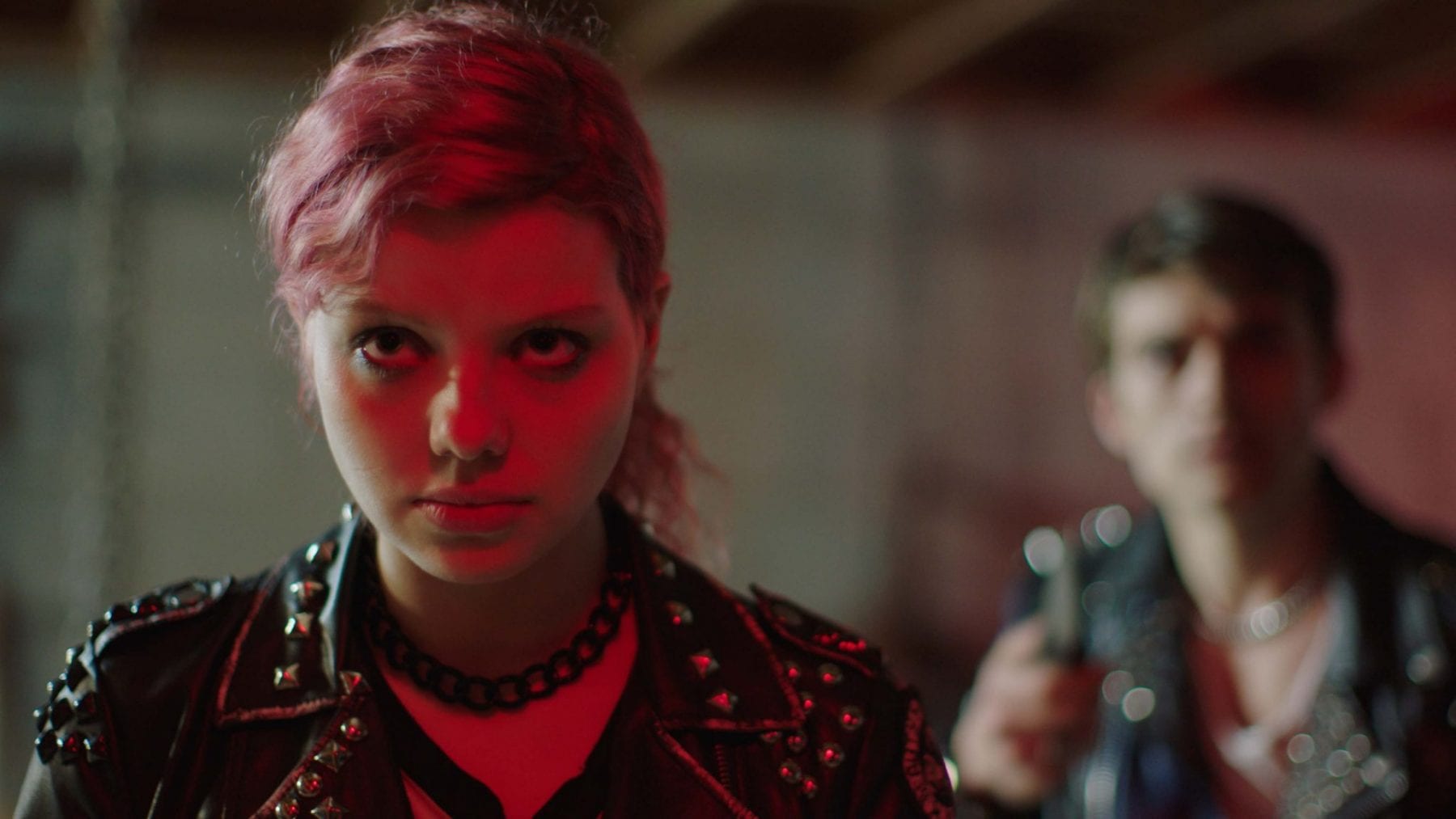 At the center of this whirlwind punk rock slasher chaos is a coming of age story. The Ranger—at its core—is about a young woman confronting her demons. This journey makes the film work on multiple viewings. Each time there is something new to unfold in what seems like a simple, yet effective thriller on first watch. Chelsea’s journey is at the center of the story; she falls in and lives as a punk but she’s not really a punk deep down. She truly is a wolf; any sub culture that draws in outsiders, as punk rock does, will bring in people that adapt the lifestyle to finally have a sense of belonging in there lives.

Sometimes it takes being boxed into a corner for someone’s true nature to really come out. The entirety of The Ranger at its core sees a psychological game of cat and mouse between Chelsea and The Ranger as she attempts to reckon with who she actually is. He sees himself in Chelsea based on her actions as a small child and always thought that they were kindred spirits. When she returns, he uses the opportunity to “help” her to unleash the wolf that has been hiding inside of her since she was a small girl. What exactly does he see in Chelsea?

Spoiling that would be a bridge too far. Jenn Wexler has made a debut feature, after producing features with Glass Eye Pix for a decade, that is an instant classic. The Ranger is a tightly wound, beautifully shot throwback slasher mixed with punk movies like Repo Man and Class of 1984. It gives the world a brand new horror icon at a time when, despite an undisputed genre resurgence, they are sorely lacking. Jeremy Holm’s performance is one that will stand with the best of the horror slasher bad guys. That, in and of itself, is an accomplishment. If you’re going to watch one movie this weekend, make sure it’s The Ranger. If you happen to be going camping this weekend, please try to keep the forest clean…The Ranger just might be on duty.