Welcome to What’s the Buzz, 25YL’s feature where members of our staff provide you with recommendations on a weekly basis. In our internet age, there is so much out there to think about watching, reading, listening to, etc., that it can be hard to separate the wheat from the chaff, filter out the noise, or find those diamonds in the rough. But have no fear! We’re here to help you do that thing I just described with three different metaphors. Each week a rotating cast of writers will offer their recommendations based on things they have discovered. They won’t always be new to the world, but they’ll be new to us, or we hope new to you. This week’s entries come from: Carol Seeds, John Bernardy, Abbie Sears, and Bryan O’Donnell.

Abbie: Three weeks ago Karamo Brown of Netflix’s Queer Eye began his new podcast Karamo, which can be found exclusively on Luminary. Karamo’s third episode was released on Wednesday, in which Karamo explores the concept of selfishness, and discusses experiences surrounding this topic with callers. Karamo’s podcast announcement was a huge surprise to me and I have to say this next announcement from his social media accounts on Thursday was an even bigger shock.

Karamo has been working on a picture book with his beautiful son Jason Rachel Brown. The book will be titled I Am Perfectly Designed, and will follow Karamo and Jason as they take a journey through the city and give us insights into how they feel that they are perfectly designed uniquely and perfectly designed as a family.

This book is very fitting with Karamo’s projects and of course his work on Queer Eye, as his passion is based around helping people find love for themselves, and how to express it in their every day life. I am incredibly excited to have this book in my life, with the gaps in between seasons of Queer Eye, hearing from Karamo through his podcast has kept me so uplifted over the past few weeks, and I already know this book will be full of wisdom and positivity that can only be made even more magical by the fact that I will be able to bring it with me everywhere I go. And based on the wonderful cover illustrated by Anoosha Syed, I can imagine just how stunning this illustration book is going to look!

The book is described as ‘an exuberant celebration of loving who you are, exactly as you are’ which could almost be an exact quote taken straight out of Queer Eye. Everything Karamo says helps me to feel slightly more empowered and loved than I did before I heard it. I don’t know how he does it, but he always gets it right, and that’s where his success is coming from. Karamo and Jason’s illustration book I have no doubt will have an impact strong enough to inspire the world to love themselves!

I Am Perfectly Designed will be available to purchase on November 5th 2019, but is available for pre-order now. 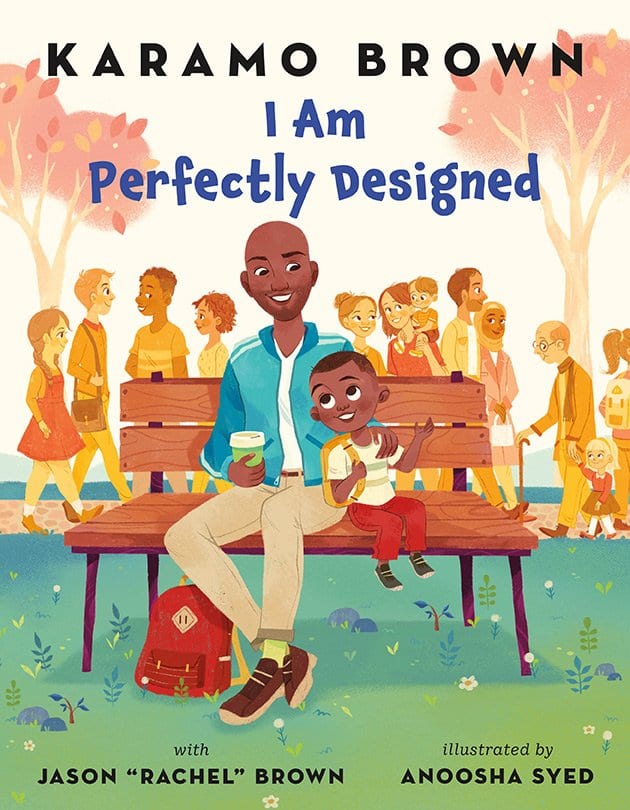 John: The All Songs Considered podcast may come from NPR, but they sure know how to play us bands who are under the radar. Sure, they constantly ignore my favorite band Warpaint, but over the years this podcast has introduced me to Lucius, Moon Hooch and Alpine. All is forgiven. And all is recommended.

Every Tuesday they play a handful of songs from upcoming releases, and you never know what styles or genre you’re going to get.

This week, main host Bob Boilen sits down with Lars Gotrich and Joshua Bote to play five songs, two of which are particularly great.

Mxmtoon is an 18 year-old singer playing a song called “Prom Dress” that can’t help but inspire a happy feeling by the time you’re done listening. I’ve never heard of the artist myself but she’s got a big social media presence and I totally see why.

The other song that really impressed me was from The Quiet Temple. I’m going to listen to more from them for sure but I’m also going to go back and listen to every Morphine album and my Medeski, Martin and Wood albums because this new track is the perfect blend of both those groups. The song’s name is “The Last Opium Den (On Earth)” and it’ll transport you.

All Songs Considered has been going strong for over 20 years but it’s never lost its bite or its inquisitive nature. Every week there’s at least one band I’ve never heard of, and they’re not snobby either. They’ll play a song from anyone as long as it’s worth knowing about.

Carol: On May 5, I got the opportunity to go to Nashville, Tennessee for the “Collapse the World” tour. The concert was held at the War Memorial Auditorium in downtown Nashville and this was by far the most beautiful venue I have ever had the chance to visit. We’re talking marble staircase, epic columns, open courtyard and massive Grecian statue symbolizing “youth” to top it all. It was absolutely gorgeous and if ever given the chance, I would highly recommend it, even if just for sight-seeing.

The opening band was a group called Vein and unfortunately, I was fashionably late and didn’t get to see them. I’m still a little sad about it; people were really talking them up once they left the stage.  The next “fluffer band”, as they proclaimed themselves to be, were After the Burial. I thought I had never heard of them; but once they started playing, I realized that I knew several songs already. They received an incredibly warm response from the crowd, which is typical in the metal community. We don’t tend to boo the newbies, as we want them to succeed. How else are we going to get more epic shows in the future?! After playing a few songs off of their new album, Evergreen, they finished up with “A Wolf Amongst Ravens.”

Parkway Drive was next and the entire reason I was there. They opened with “Wishing Wells” and it sounded just like the album. Smoke machines and a beautiful light show were on display and it was just a killer look all around. Lead singer Winston McCall came across as a humble, loving entertainer; happy as could be to play for us in a small-town venue. He really kept the energy up and I loved every minute. Throwbacks like “Carrion” and “Karma” were a welcome surprise. I didn’t quite expect them to go back so far in their discography, but I have no complaints whatsoever. It wasn’t your typical band trying to up-sell their latest record and that’s it. Reverence, PWD’s latest and greatest, is timeless; but it was so nice to hear some old stuff as well.

My husband and I had balcony seats, so I was worried that I wouldn’t have a good viewpoint, but honestly, the venue was so fantastic that even balcony seats were great! I only cried twice during “Vice Grip,” which is an all-time favorite of mine. I’m usually a sappy mess at rock concerts (weird I know) but I was having such a good time that it just didn’t happen as much as usual. They finished off with “Crushed” and “Bottom Feeder” from the Ire album and left everyone smiling and hoarse. I only wish it would have lasted longer.

Killswitch Engage was the headliner for this particular show. According to several rock media sources, they have been alternating with Parkway Drive on what is being called a dual-headliner tour, which I found interesting. I’m not a huge fan of KSE; especially not their current front man. I don’t like politics being brought into my music and I don’t like it when bands have an agenda to promote their side of things; which is what Killswitch attempted to do. While their sound was phenomenal and couldn’t be topped, I just wanted to hear the music, not the propaganda. So we bounced out of there happy as could from our Parkway Drive experience nonetheless, after hearing four or five Killswitch oldies.

We stopped the merch booth so I could blow some dough on a tour shirt. The girl that sold it to us gave us an authentic PWD guitar pick and of course I freaked out like the fangirl cliché that I am. But alas, we are old and don’t do late night outings; so it was back to the hotel for us. I mean come on, I had to get back for the second showing of Game of Thrones! But enough about me. If you can catch a show off the Collapse the World Tour, I can assure that you won’t regret it. Rock on!

Bryan: I have been thoroughly enjoying the first season of FX’s What We Do in the Shadows, based on the 2014 film of the same name. The mockumentary about a group of vampires living together in a house starred (and was directed and written by) Jemaine Clement and Taika Waititi.

While Clement and Waititi don’t star in main roles in the TV version, they wrote and directed a number of the episodes. (They also appeared as part of a star-studded guest cast making up the Vampiric Council in this past week’s excellent episode.)

What We Do in the Shadows is hilarious; I find myself genuinely laughing out loud each episode. And the 30-minute episode length helps prevent things from getting stale.

The three main vampires, Nandor (Kayvan Novak), Laszlo (Matt Berry), and Nadja (Natasia Demetriou) all have their moments. But my favorite character is probably Nandor’s human familiar Guillermo, played by Harvey Guillen. Always loyal to his master in hopes of one day being turned into a vampire, Guillermo uses a brilliant dead-pan delivery that cracks me up constantly.

A funny, clever addition that differs from the film is the Colin Robinson (Mark Proksch) character, an “energy vampire” who feeds off people’s energy by telling them incredibly boring stories. Seven episodes into a 10-episode first season, What We Do in the Shadows shows a ton of promise. If you were a fan of the film, this show is definitely worth checking out. And if you haven’t seen the movie, don’t let that prevent you from watching. You won’t be disappointed. 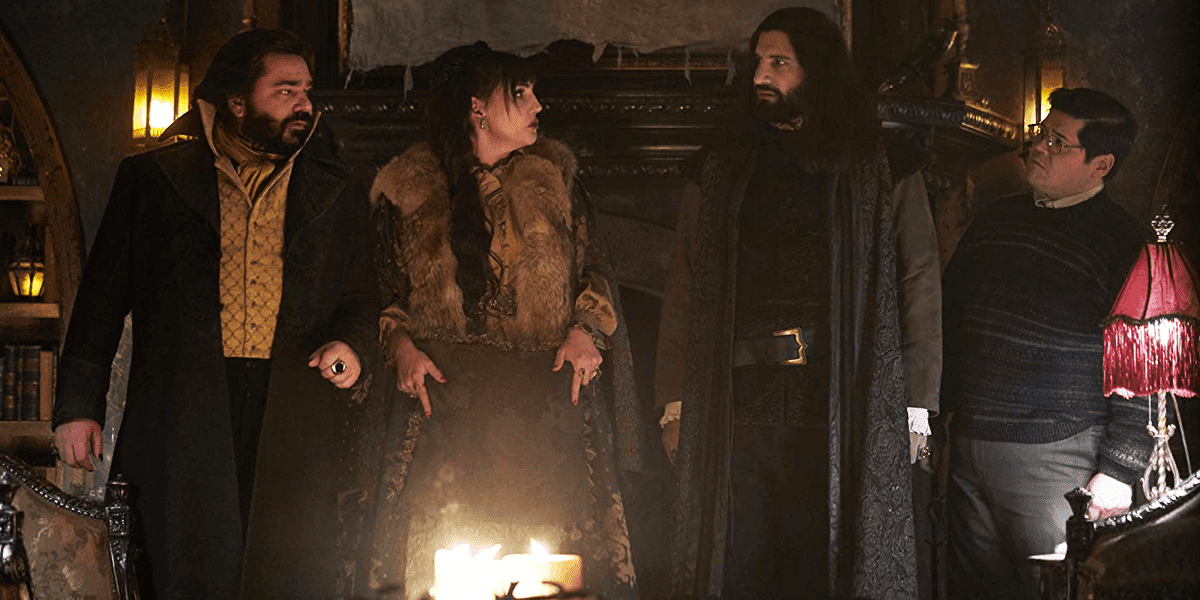 Those are our recommendations this week! What would be yours? Let us know in the comments.