Welcome to What’s the Buzz, 25YL’s feature where members of our staff provide you with recommendations on a weekly basis. In our internet age, there is so much out there to think about watching, reading, listening to, etc., that it can be hard to separate the wheat from the chaff, filter out the noise, or find those diamonds in the rough. But have no fear! We’re here to help you do that thing I just described with three different metaphors. Each week a rotating cast of writers will offer their recommendations based on things they have discovered. They won’t always be new to the world, but they’ll be new to us, or we hope new to you. This week’s entries come from: Rachel Stewart, John Bernardy, Conrad Smith, Anthony Divers, and J.C. Hotchkiss.

Rachel: One floating princess, two kingdoms at odds. Who better to transform a feminist fairy tale to a musical by Tori Amos? The Light Princess musical debuted in London in 2013. Along with Samuel Adamson, Amos adapted the Scottish fairy tale of the same name by George MacDonald into a full blown musical filled with courage and heart. The story follows a princess named Althea. When her mother dies, she refuses to be sad and becomes weightless. As the years go on, and Althea’s royal family refuses to accept her as she is, she escapes to a neighboring kingdom, only to fall in love—on her own terms.

I’ve been an Ears With Feet (or Tori fan) since the late ‘90s, and while nothing will match the fire of her early albums, I’ve enjoyed watching her deepen her catalogue and continue to cross genres through her career. These musical efforts dovetail well with her classical-influenced song cycle Night of Hunters: full of lush strings and sweeping turns. The full cast recording boasts a full orchestral score and strong, emotive vocals from the original cast, as well as bonus tracks featuring Amos herself. While it’s unlikely we’ll get a full production of this charming musical stateside, I’m glad I finally dove in. Eagle-eared fans of Amos will also recognize the melody of “Coronation”—it’s also used in “Winter’s Carol” from her winter-inspired album Midwinter Graces.

“Darkest Hour” is one of the strongest offerings, with the trademark whimsy and longing Amos is known for:

So let the night show me the way

I now invite shadow to stay

As I gift the stars my silent scars

If you’re a fan of fairy tales, Tori Amos, or musicals, you’re in for treat. Brew yourself a cuppa, curl up in your favorite armchair and float away.

Anthony: A lot of things make me happy; I’m a happy kind of guy: spending time with my family, seeing my partner smile, getting stupid drunk with my amigos. All of these things make me happy. But nothing makes me happier than the announcement of a new Slipknot album. And holy fucking shit, it’s happened again. We Are Not Your Kind was officially announced this week with Slipknot revealing the awesome album art work and track list on their social media. As soon as I heard the album title I got the line from “All out Life” ringing in my ears—the single they released last October. In the song, “We are not your kind! We are not your kind!” is repeatedly bellowed by front man Corey Taylor, so I was surprised not to see the single within the track list. I guess that was just a not so subtle hint at the upcoming album.

The album art is as mysterious and creative as I’ve come to expect from this awesome band. We see the head and shoulders of a naked person, but the head is cloaked in what looks like black lace. The face is obscured, which again is to be expected from the masked metal legends, and the figure’s left hand clutches the lace. Above this we have the simple Slipknot logo in red, and above that we have the album title in white. Simple, effective, and gorgeous. As well as the art and the track list they also released a short video giving away glimpses of modified masks and outfits. All very aloof and intriguing, just enough to stir up excitement amongst the die hard maggots such as myself.

If the album is anything like All Out Life, it’s going to be Slipknot at their best. Heavy, melodic and filled with rage. The album is to be released August 9th, and I for one cannot wait. We are excited, we are the pulse of the maggots, and we are not your kind. 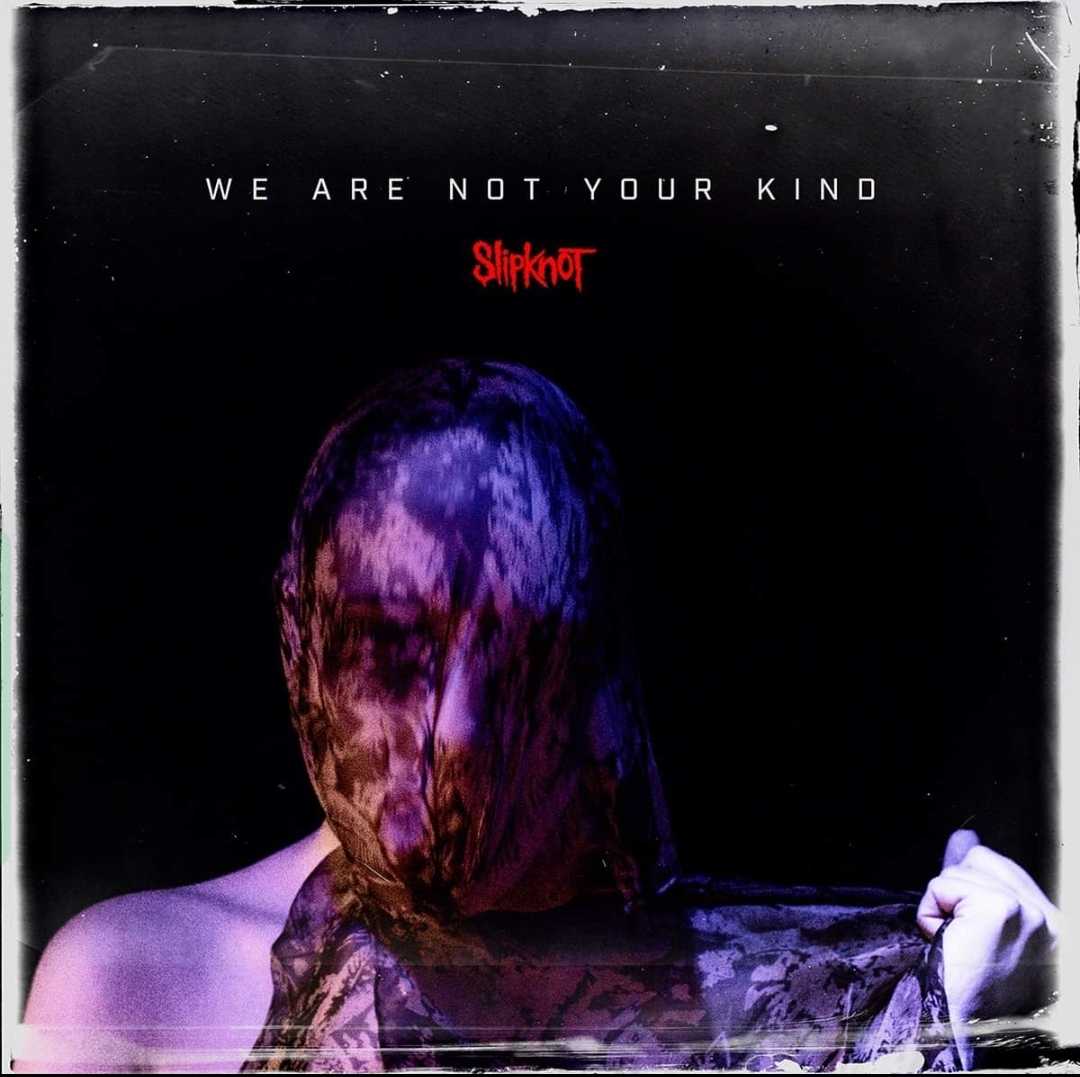 J.C.: Detective Pikachu opened this past weekend, and for a couple of months leading up to it, all I heard was, “Mom, we’re going to see Detective Pikachu when it comes out, okay?” So I guess I really didn’t have a choice in the matter, but surprisingly that was alright, because Detective Pikachu—not unlike Pikachu’s voice actor Ryan Reynolds—was utterly delightful.

Besides seeing many of the Pokémon that I had seen growing up on the big screen, there is the story of Tim Goodman (played by Justice Smith), whose dream was once to become a Pokémon trainer, arriving in Ryme City to find out what happened to his dad, Detective Harry Goodman. Along the way, he comes across Pikachu, his Dad’s Pokémon. In Ryme City, everyone has a Pokémon partner. When Tim realizes he can understand Pikachu when no one else can, the two team-up to really find out what happened to Harry, since everyone is convinced he’s dead.

We get to see Jiggly Puff, Charizard, and many Bulbasaurs, but also the allusive Mewtwo. Bill Nighy and Kathryn Newton are part of the cast as well. Of course, Ryan Reynolds as the voice of Pikachu steals every scene, but honestly I’d listen to Reynolds read the phone book. So having him voicing is a great big bonus.

The story is a great mix of comedy, action, fantasy, and gumshoe mystery. With a twist (I’m not giving anything away) that I thought was great. Detective Pikachu is a kids’ movie that adults can love as well; especially adults who collected Pokémon cards and have played Pokémon Go. If you’re not so Pokémon inclined, it is still a cute movie that you can get lost in for an hour forty-five and forget about the rest of the world. That’s what I did and enjoyed it immensely.

Conrad: After work Thursday, I fired up the Criterion Channel. There, in the featured content section, was a startling white image. It contained a profile shot of the actor Dane Clark. In this impeccably designed banner promoting the 1948 film noir Moonrise, Clark is looking away from us with a noose around his neck. It’s an unsettling image in both its asymmetrical composition and in the way he doesn’t seem frightened. He appears determined to ignore the lingering death dangling around his throat, which, having watched this fantastically dark film, makes this notion all the more brilliant.

Director Frank Borzage’s Moonrise is a tale of a certain kind of fatalism: one that perpetually nips at our heels; one that we’re always running from. The idea here is: can we escape it?

The film opens in the shadows of an execution (a hanging). Once the lever is thrown and the deed is done, we, in a spectacular bit of foreshadowing, cut to a baby crying in the night. A shadow spills across the child. It’s of a figure swinging from a rope. We find out, as the camera pulls back, that the shadow is being cast by a doll hanging over the crib. This, of course, informs the rest of the movie.

Danny Hawkins, played by Clark, grows up being tormented for his father having killed a man and having been hanged for it. Even as a young adult, it still haunts him. It’s the kind of thing a small town would never let go of. When Danny gets into a scuffle with one of his lifelong tormentors, Jerry Sykes, Danny, in self-defense, clocks the bully over the head with a rock, killing him. He, in this moment, seems to have fulfilled the town prophecy: he has become his father.

Moonrise features stunning frames from cinematographer John L. Russell, who would later go on to shoot Alfred Hitchcock’s Psycho. It’s the kind of film that seems a little out of bounds from the usual Hollywood fare of the era, and that’s what makes this thing a home run. It’s bleak, stylish, and moody, packed with punchy dialogue and wonderful performances; particularly from the supremely talented Gail Russell, who plays Danny’s love interest, Gilly Johnson. This is a film that will stick with me for a while.

They talk even-handedly about patriarchy issues, the context of what the show and culture of 1999 was trying to say, and general pros and cons to Xander’s treatment and how he treats other characters.

It was an interesting look into how entrenched patriarchy is into media, especially back in 1999 when the show was made.

I like how the hosts mentioned how Xander didn’t seem so bad back in the day, but the conversation about everything from #MeToo to toxic masculinity has shown just how far our culture has come since Buffy was being made. And it’s revealed a troublesome level that Xander is participating through without consequences (in a show that always pays the consequences back to a character for their questionable choices).

Xander’s become more troublesome to me too, and it was nice to hear a podcast voice a viewpoint on his character’s nature in a much more concise and eloquent way than I’d be able to voice.
It’s interesting to note that this episode of the podcast was from January of 2018 so it’s slightly out of sync with where we are today as well. A conversation about historical perspective having a slight amount of historical perspective itself has a tone to it that makes for more engaged listening.

Why am I listening to this podcast now instead of when it aired? Because I’m listening to it along with Chipperish Media’s Still Pretty podcast and they’re only just now getting to this episode. Still Pretty is more an analysis of themes while Buffering is more recap-centric, so usually they end up complementing each other by picking up the other’s slack. It’s nice when both pods’ ethos blend together.

It’s Season Faith, Episode Xander, and Andrew Ti (of the Yo, Is This Racist? blog & podcast) joins us for a deep dive into the patriarchy and macramé owls! Plus!! The incredible Chris Farren retur… – Listen to 3.13: The Zeppo by Buffering the Vampire Slayer | A Buffy the Vampire Slayer Podcast instantly on your tablet, phone or browser – no downloads needed.