I’ll be completely honest with you and say that I was totally happy with how Downton Abbey ended and I was never expecting us to get more. Now years later, here I am stupidly excited for the upcoming movie for which we were treated to a full trailer earlier this week, and it does not disappoint. The movie will be set two years after the series ended in 1927 and will serve as a continuation of the show but could still potentially be viewed as a standalone movie.

The trailer provides us with a brief synopsis of the plot and we learn that the Granthams (Hugh Bonneville & Elizabeth McGovern) are expecting a royal visit from King George V and his wife, Queen Mary. Inevitably, another Mary in the house will mean fireworks. However, before they can arrive, a royal butler played by David Haig must first come and inspect our favourite Abbey. What follows is the arrival of the Royal families staff, which causes quite a commotion downstairs. The Royal staff see themselves as superior to Carson (Jim Carter), Mrs Hughes (Phyllis Logan), Thomas (Robert James-Collier), Mrs Pattmore (Lesley Nicol), and Daisy (Sophie McShera) which obviously begins to cause tension.

The glimpses we get of the staff rivalries in the trailer give me serious Gosford Park vibes which is brilliant considering that Downton Abbey was initially conceived as a spin-off to that movie. Despite the feuds though we do get a glimmer of happiness as we briefly see Thomas kissing a mystery man. Could he be finally finding romance with one of the Royal butlers? 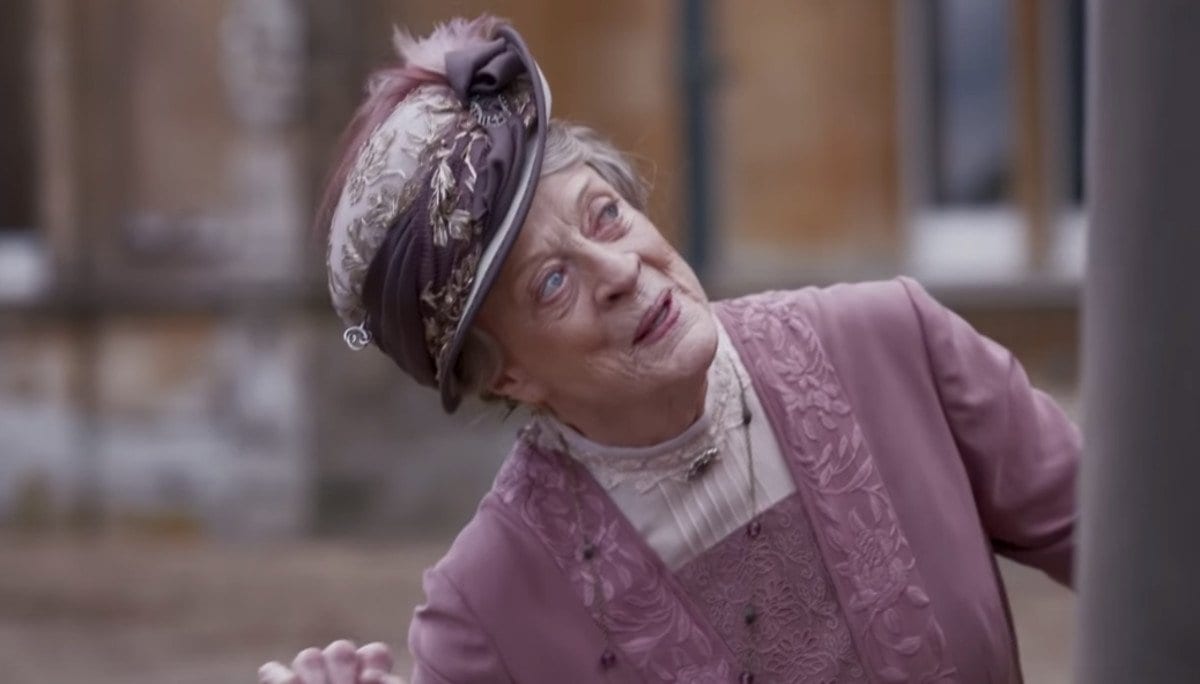 It looks like all of the characters we know and love are returning for this big screen outing such as Lady Mary (Michelle Dockery), Lady Edith (Laura Carmichael), and Anna (Joanne Froggatt) but there was still one big character we simply HAD to see.

One of the main reasons we all watched DA was for the Dowager Countesses (Dame Maggie Smith) put-downs, right? She is one of the greatest characters ever created and played so perfectly by Maggie Smith. She’s put down countless people on the show itself and has been a constant source of hilarity from the beginning so I think a movie without her just wouldn’t work. A year before signing up for the movie she was asked if she would return for it and her responses was, “I just think it’s squeezing it dry, do you know what I mean? I don’t know what it could possibly be”. This wasn’t the only time she’d expressed her disinterest in appearing in a movie as, during an interview with Graham Norton, she’d said she couldn’t return “because honestly-by the time we’re through-she must’ve been about 110. So, I couldn’t go on and on and on”.

Maggie Smith has such a brilliant, dry sense of humour that you never know what to take seriously and I know that myself and plenty of other viewers are just glad that she’s a part of this movie. In the two and a half minute long trailer, she delivers at least four of her legendary putdowns, so I suspect us Dame Maggie fans are in for a big treat with this.

Downton Abbey: The Movie opens in UK cinemas on September 13th and in the US a week later on the 20th.