A pilot can make or break a show and, if it’s not so great, it can turn off any viewer from watching the rest of the series. Join 25YL as we take a deep dive into TV pilots that we found lacking in our Powering Through the Pilot series. This week, join Lindsay Stamhuis as she looks at the pilot episode of Seinfeld. Got a pilot episode you love or hate (or something in-between)? Be sure and let us know!

Whether you loved it or hated it, there is no denying that Seinfeld is one of the most influential sitcoms of all time. The initial premise—much mocked in the story arc where Jerry and George pitch a “show about nothing” to NBC—doesn’t seem at first glance to have much forward momentum. I would love to have been a fly on the wall in the executive’s office when Larry David and Jerry Seinfeld first sat down to pitch this show.

Really, you need to remember what the TV landscape was like in 1989 to understand how revolutionary Seinfeld was. Traditional multi-camera sitcoms like The Golden Girls or The Cosby Show were high in the ratings; they offered consistent laughs—and were revolutionary in their own ways—but stuck to tried-and-true methods of delivery: a constant stream of set-up/punchline shticks lasting around 24 minutes, with a near total reset at the top of the next week’s episode. This is what worked. It’s what paid the bills.

So in the same way that Twin Peaks revolutionized the hour-long drama in 1990, Seinfeld—looking back, anyway—was poised to challenge perceptions of what situation comedies could do. A “show about nothing” based on the neurotic stand-up comedy routines of a former Johnny Carson regular was just what was needed to shake the foundations of television.

But…the pilot was so bad.

It aired for the first time in July 1989 and absolutely tanked, leading NBC to walk away from the deal. It was given a reprieve by a forward-thinking executive who saw something (don’t ask me what) in the half-hour episode and convinced NBC to re-air it, and upon marginally better reception a second season was ordered. Watching that pilot episode now, I’m shocked that this show made it past the pilot to a full first season in the first place.

Where to start? The awful intro music is only awful in retrospect, so I can’t fault anyone for that. I can also forgive the lack of character grounding as well, since this is a first season and hardly anyone knows their characters well enough to hit the ground running with Episode 1 (Twin Peaks’ s Dale Cooper, Mad Men‘s Don Draper, and a handful of others notwithstanding). But the Seinfeld pilot is all over the place in terms of plot. Sure, it’s a show about nothing, but as later seasons proved, it’s possible to weave a little something into a show about nothing too.

Clever writing can take an A-, B-, and C-plot and run a thread through each one that brings them together so solidly at the end, but which you can’t see coming upon first watch. Think of the best Seinfeld episodes—how many of them feature a final scene that ties up the loose threads of every plotline in the preceding two dozen minutes? (David Puddy screaming “DEVILS!” into the face of a Spanish priest recovering from seeing the devil comes to mind, as does George retrieving a golf ball from his pocket in the diner…brilliant moments!) The pilot features none of this. The episode is a montage of scenes strung together by Jerry’s desire to hook up with a woman coming to visit from out of town, punctuated by literal scenes of Jerry’s stand-up. It’s a bizarre mash-up of poorly scripted scenes and too much stand-up.

The opening scene is just Jerry and George talking in Pete’s Luncheonette (which looks like a TGI Friday’s, if I’m being honest). This is jarring enough in and of itself—Tom’s Restaurant had yet to be immortalized as their diner of choice (though Suzanne Vega had already been warming up her crowds and doing mic checks with her eventual hit “Tom’s Diner” for nearly a decade)—without the weirdly stilted dialogue and the intrusion of waitress Claire (Lee Garlington). Apparently Garlington was supposed to be the female character on the show; they swapped her out for Elaine, thank heaven. Taking centre stage, the two friends initially discuss the position of the second button on men’s dress shirts and how it can “make or break the shirt”; this conversation caps off the finale, bringing the whole thing full circle in an interesting way, but in this moment, you could be forgiven for being unable to give a damn about George’s shirt.

They continue to bicker about the precise meaning of every little word (“had to”…”maaaybe”) spoken by a young Poli Sci instructor named Laura who is coming to New York to see Jerry; Claire provides a little ornery commentary and little else. This is the main thrust of the episode: will Jerry get laid, or is Laura just using him as a “back-up, a second line, a just-in-case, a B-plan, a contingency”? 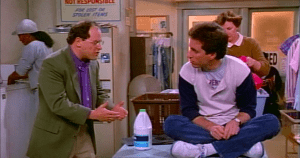 This conversation gets dragged on for no good reason to the laundromat, where—I kid you not—every single person washing their clothes cannot help but be enraptured by the conversation loudly happening in front of them. Jerry sits cross-legged on a folding table—prime real estate in any laundromat—while George flops around, gesticulating wildly as he is so wont to do, even falling to his knees in perturbation at one point. At no point in all of this do any of the other people present tell either of them to shut the hell up. Future seasons of Seinfeld script interactions with average New Yorkers in much more realistic ways; this scene, unfortunately, does not, but beyond that it doesn’t add a single thing to the plot except pad the run-time of the episode.

Well, it leads into Jerry’s next stand-up bit, which is about laundry day being the most exciting day for clothes. And that’s maybe the worst sin to fall on this episode: the scripted bits often act as little more than a set-up for the stand-up. It’s so bass-ackwards that, especially in light of the episodes to come, it is laughably bad.

The introduction of Kramer (Kessler in this episode) is handled just about as well as anything else in this episode, which is to say it’s handled poorly. Kramer as we come to know him is zanier and more out there; this guy is just a lazy moocher who spoils the ending of the Mets game for Jerry (who was trying to watch it on tape), raids his fridge, and rips up his magazine. Hardly fascinating stuff.

However, now that we’ve been introduced to the three principal main characters, it’s easy to understand why the producers and the network felt they needed a female presence; these three are annoying on their own without a fourth person to balance them out, and Claire the waitress is too flat to have done the job.

In either case, having convinced himself that the mystical Laura isn’t going to show up that weekend, Jerry is surprised when she calls to ask if she can stay at his place. The predictable set-up can be seen from a mile away: does Laura just want to sleep on Jerry’s couch or does Laura want to sleep with Jerry? George, in perfectly disturbing fashion (remember, this is right after Jason Alexander’s turn as Rapey McRaperson in Pretty Woman), makes a few lewd comments to the latter. Jerry, ever the gentleman, has brought in a futon mattress for her, just in case.

Once again, George and Jerry go through the conversation blow by blow to determine the meaning, and at this point I start having flashbacks to high school lunch hours when my friends and I would pore over convos between us and our crushes, looking for hidden meaning where there was none. I don’t know if men actually have conversations like this—that’s not my point at all—but I have a hard time believing that grown men would obsess over this kind of thing to this level. Having said that, this is George Costanza and Jerry Seinfeld we’re talking about; they were in arrested development since long before Arrested Development came along.

Things go from weird to worse as Jerry and George meet Laura at the airport and once again monopolize the public space in which they find themselves in order to have a long and drawn-out conversation about how novel it would be if men could just ask women what they wanted, and about how to interpret signs and signals from women instead. This hasn’t aged well—of course you can, and should, ask women what they want! We’re not zodiac constellations!—so I can’t fault it for that, but I’m starting to lose interest in the plot by this point.

Watching people talk has never exactly been my cup of tea and so far, apart from the scene in which Kram—er, Kessler’s dog (!) arrives to drink from Jerry’s toilet, that’s all we’ve seen: Jerry and George in various places, talking. It wouldn’t be so bad if it wasn’t for the predictable plot, which hinges on this mystery woman. When she arrives and the big plot twist lands—surprise! She’s getting married! No sexy time for you!—you can tell that the writers were hoping that this would make things novel and hilarious in retrospect, but all it does is underline the fact that these characters wasted something like two days of their lives talking about something that ended up being entirely fruitless.

The final stand-up bit is Jerry being Jerry, talking about men being men and women being women and how mutually unintelligible the two are. Remembering that this is from a time of Men Are From Mars, Women Are From Venus does little to soften the hard edges of this episode, which hinges on basic, sexist misunderstandings played out over tired sitcom tropes using banal dialogue that never ends. Hardly inspirational stuff, and a far cry from the brilliance of later offerings—”The Bizarro Jerry,” “The Soup Nazi,” “The Marine Biologist,” “The Puffy Shirt,” “The Contest,” even next season’s “The Chinese Restaurant” are all miles and away better in terms of staging, pacing, plot, and dialogue than the pilot.

It’s worth it to tough it out and get to the better stuff just over the horizon. But boy oh boy is the Seinfeld pilot a slog.

More From: Powering Through the Pilot