I hesitate to use the word “finally” but with “The Blue Scorpion”, the new Twilight Zone reboot has finally found the perfect balance in merging social commentary and compelling drama into a cohesive whole. Though there have been excellent episodes in the past, such as “Replay”, which tackled topics of systemic racism, and “Not All Men”, which handled toxic masculinity in a clever way, those episodes were clearly not meant to be subtle.

And while episodes with overt themes are completely welcome, sometimes finding a compelling story that stands on its own, without any direct or obvious “message”, can deliver the biggest impact to the unaware observer when its true purpose is revealed. “The Blue Scorpion” uses its Stephen-King-like premise to suck you into the story on a micro level, before finishing off with a macro “lesson”, for lack of a better word, that you only then recognize had been apparent the entire time.

Directed claustrophobically by veteran Craig William Macneill (Lizzie and TV’s Chilling Adventures of Sabrina) and written by Glen Morgan, who finally hits his groove after two middling episodes earlier in the season, “The Blue Scorpion” starts with anthropologist Jeff Stork (Chris O’Dowd), recently separated from his wife and living with his dad, entering his temporary home to find his father dead from a self-inflicted gunshot wound. Jeff’s dad was a “lifelong hippie” who hated violence so much he dodged the Vietnam draft, smoking out and making music with his pals. Finding a gun by his side seems like the antithesis of his existence. 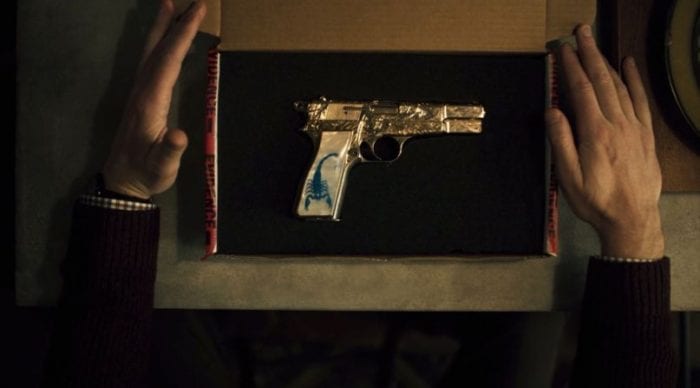 The gun, a beautiful silver number with a blue scorpion emblazoned on the handle, thus becomes the key mystery in Jeff’s unraveling life. Besides the gun, there are two additional items Jeff must deal with: a suicide note his father wrote that says “I love him more than you” and a bullet with “JEFF” engraved on it.

Clearly spooked by the entire episode, Jeff goes to sell the gun, which turns out to be a much-sought-after antique. When he gets close to a deal to have it sold, for tens of thousands of dollars at the minimum, the gun fires, as if in anger at being taken from Jeff’s side. Jeff begins to care for the gun, even though he hates the thing himself; at first leaving it in a cushy safe with the light on (as some people have suggested should happen as, without light, the Blue Scorpion “gets angry”), then eventually carrying it with him at all times.

As the Gollum-like desire to keep the gun at his side intensifies, and his divorce proceedings go further down the tubes, Jeff starts to wonder who the bullet with JEFF engraved on it was for: himself or his wife’s new lover, who just so happens to also be named Jeff. Turning down deals reaching six figures for the Blue Scorpion, Jeff decides to let fate decide what the gun’s purpose is.

The clear inspiration for this episode is the short stories of Stephen King, as it uses common inanimate objects and imbues them with personality and terror. Since Stork is an anthropology professor, he is familiar with the concepts of animism and/or anthropomorphism and finds them slightly absurd, even telling a student researching animism, who is panicking that maybe her shoes have feelings and shouldn’t be left alone, that she is maybe overthinking it.

But as tensions mount between him and his wife, including her possibly taking away some of his father’s prized possessions due to their value, Stork starts to show the same levels of concern and care for the Blue Scorpion as his student did for her shoes. What starts as simply “checking in” on it becomes ever increasing long looks at it. Before he knows it, Stork is bringing it to school to place in his desk and, eventually, carrying it with him at all times. 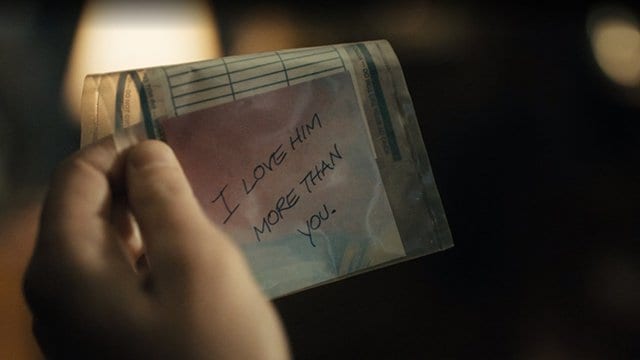 We are so invested with Jeff’s gradual mental collapse, his increased paranoia (he is finding everyone he interacts with appears to be named Jeff and thus may be a part of the JEFF bullet’s future), and the audience’s genuine wonder at what will happen next, that we ignore the very clear commentary at hand—the obsession with firearms.

“The Blue Scorpion” doesn’t have a traditional twist like the previous eight episodes of this season. The twist is more subtle and ironic, taking quiet left turns where you expect narratives like this to go right. In what is likely a homage to Taxi Driver, Jeff’s obsession with firearms and deteriorating mental state accidentally makes his life better.

One night, sitting in his car outside his wife’s home, Blue Scorpion in hand, unsure if he should give the JEFF bullet purpose by killing his wife’s lover, a random man attacks Jeff and tries to kill him. The Blue Scorpion comes in handy as it blows the attacker away seemingly on its own, protecting its master. It is revealed the attacker was a wanted criminal, responsible for multiple home invasions in the area, and had eluded capture for weeks. His name: Jeff.

For Jeff’s bravery in “protecting” his wife and the neighborhood, the newspapers declare Jeff a hero. His wife gives him whatever he wants in the divorce, he receives tenure at his job, and he is able to move into a swanky apartment. Feeling he no longer needs the Blue Scorpion as the JEFF bullet was used to kill his attacker, Jeff throws the gun into a lake and moves on with his life.

A more typical horror scenario would show the gun refusing to leave Jeff or murdering him in an act of vengeance. But Jeff walks free, his life ever-better. That, in itself, was a nice twist. However, the very ending gives us another shock and, as mentioned above, makes the pretty obvious allegory of gun obsession take on a new and twisted face. 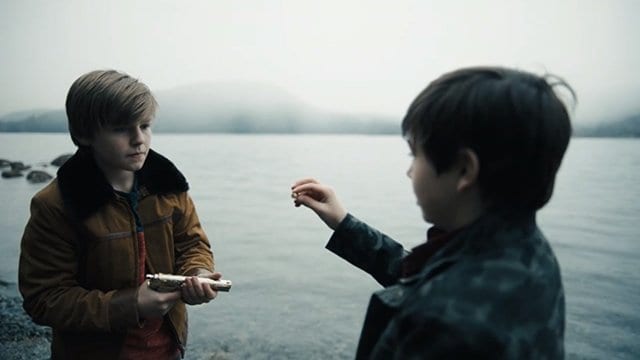 The Blue Scorpion, of course, washes up on shore to be found. But instead of being found by adults, it is found by two kids who begin to play act with it. One of them even finds a bullet with his name on it. Nothing terrible happens on screen (though the director does his best making you think it will in what is an uncomfortable two-minute sequence of two children playing with an actual gun), but Jordan Peele’s narrator offers the following:

Human beings have a funny way of treating things like people. But today, they’ll learn that as long as objects are valued more than lives, tragedy will forever be manufactured…here in the Twilight Zone.

I was so focused on Jeff’s story that I did not see that end coming. And Jordan Peele’s excellent delivery brings a chill to the spine. Of course, there aren’t guns out there with minds of their own. But there are enough people out there who think they do, showing that the never-ending gun violence in this country is not only willfully brought into existence but also entirely preventable.

To subtly drive home this point, Jeff, at one point during his divorce proceedings, shouts “I love him more than you”. This sentiment not only applies to Jeff’s mental state under the influence of the Blue Scorpion itself, which clearly affected his father as well, but is perhaps a nationwide sentiment fomenting in United States culture overall. Anthropomorphism indeed.

“The Blue Scorpion” is my favorite episode of this first season and if you hadn’t jumped on board yet or maybe got off the ship when you thought things weren’t sailing right, this episode should get you back on course.