This article is now available to listen to on our Anchor Podcast. Listen via iTunes or Spotify.

May is Mental Health Awareness Month and here at 25YL, we want to highlight some of the films that spoke to us directly about this sensitive subject. This week, Matt Armitage looks at Mike Flanagan’s’ first feature Absentia, and its focus on the effects of grief on mental health.

Mike Flanagan is a well-known name in horror storytelling these days, building from well-received films like Oculus, Hush, and Gerald’s Game through to his recent re-imagining of The Haunting of Hill House, released on Netflix. His first feature, the low-budget Absentia (2011) is somewhat less well-known, although it has all the now-familiar hallmarks of a Flanagan creation: a focus on tortured family dynamics, intense mood-building, and a light touch with the supernatural elements. Trauma and grief are recurring themes in many of his creations, and these are the lynchpins of what makes his horror believable, and effective. The darkest recesses of our minds: where we store our fears, our trauma, our guilt; this is what scares us the most, and from where we create our monsters, our boogiemen, our visions of the dead.

Absentia at its heart is a film about loss, and the effects that it can have on our psyche, but also delves into the folklore surrounding disappearances and creatures who lure people away into another realm, close to ours, but somehow removed and hard to access. It explores the various aspects of grief, and amongst those: denial. Is this where these folk tales emerge from? A collective desire to explain away the missing, to find supernatural explanations for a mundane fact that we can’t bring ourselves to accept.

Dealing with the loss of a loved one is something that is dealt with in TV and Film regularly, and most recently very effectively in Sorry For Your Loss. It’s something many of us can identify with and provokes a strong sympathetic emotional response. Flanagan takes Absentia to a different, more haunting level, as it opens with Tricia trying to come to terms with a husband who simply vanished seven years earlier, and now has to grapple with the trauma of declaring him dead in absentia. 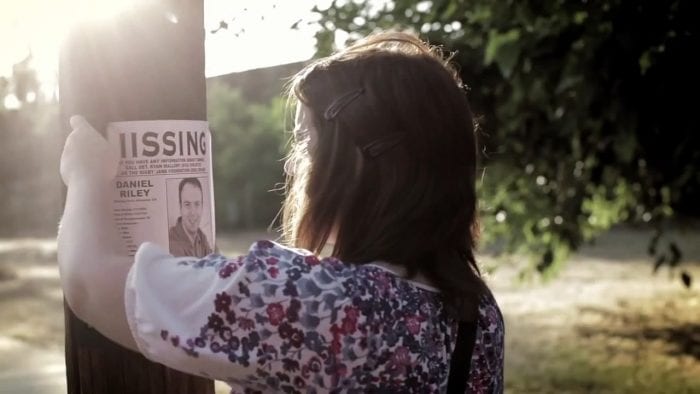 Callie, Tricia’s sister, has come to visit to provide moral support. Callie is a recovering drug addict, with a bad habit of disappearing, leaving her troubles behind her. Tricia is pregnant but seems reluctant to tell Callie who the father is. She mentions that she hasn’t told her dad yet, to which Callie responds with an angry “Fuck him anyway, I mean, if you can even find him.” People close to her vanishing—of abandoning her—seems to be a common theme in Tricia’s life.

Waking in the night, Tricia comes downstairs and sees what she believes to be Danny, her husband, standing with his back to her in the living room, sobbing. She touches him and he turns, lunging at her like a demon. She wakes in her bed in terror. It’s not made clear whether this is something that has been occurring to her regularly, or whether the trauma of having to declare Danny legally dead is triggering the nightmares, as well as the waking apparitions that will shortly haunt her. This isn’t thrown in merely to provide some jump scares, however. Hallucinations due to grief are a relatively common reaction to bereavement but something that people are reluctant to discuss for fear they will be considered insane. Hallucinations are usually associated with drugs and severe mental illness like schizophrenia, but they are not unusual in sober people with no history of mental health issues, and much more likely during times of extreme stress. One study found that over 80 percent of elderly people experience hallucinations of their dead partner after bereavement. A report by German researchers described how a middle-aged woman, whose daughter died from a heroin overdose, often saw a young girl and sometimes heard her say “Mamma, Mamma!” or “It’s so cold.”

Most visions of dead loved ones are comforting, but what Flanagan is touching on here is that feelings of guilt can play a big part in how we react to losing a loved one, and the mental health of those who have lost someone. Tricia somewhere inside herself still believes that Danny is alive. She describes to Callie her rationalizations in the first year of his disappearance—that he was kidnapped, or had amnesia and wandered off. Declaring Danny dead is a betrayal, akin to murdering him herself. Add to this the guilt of getting pregnant, when Danny could still be out there somewhere. Technically she’s still married, so she has the guilt of cheating on him as well. The fact that even seven years later, Tricia is still putting out fresh missing posters of Danny strongly implies that she has not accepted that he is dead, but simply gone somewhere, somewhere that she can’t find him and that he can’t get back to her from. In 2013 the fifth edition of the DSM (Diagnostic and Statistical Manual of Mental Disorders) added Complicated Grief Disorder to its list of mental health disorders (also known as traumatic or prolonged grief). Losing a loved one is a terrible thing, but when you don’t know for sure if they are actually dead, the normal process of grief and acceptance is disturbed. In Tricia’s case, the mourning state is a perpetual loop, and her mental health is suffering as a result.

The other aspect of the film comes into play when Callie goes jogging in the morning, and on her way out of the street runs through a dark underpass. Given his low budget, Flanagan uses natural lighting and music to great effect in this film; the underpass is a dark, eerie place, somehow separate from the bright daylight outside, evoking childhood fears of the dark and of strangers or monsters who may lurk in those shadows. On the way back from her run she sees an emaciated man slumped in the tunnel who seems surprised that Callie can see him. “It’s sleeping” he mutters.

Absentia is a considered, quiet film, starting slow, which works to great effect building the mood of grief, loss, and trauma. Gradually we begin to understand that Tricia’s visions of Danny are grief-based—and very likely also guilt-based—and that with help from her therapist and meditation she seems to be working towards coping with them, and learning to ignore them. She is also beginning to accept that she can have a relationship and that she doesn’t have to feel guilty about this. It’s at this point—nearly halfway through the film—just when we feel like we have the measure of the film that Flanagan rips the rug from under us and proceeds to set it on fire.

Without wanting to give too much of the plot away for those who haven’t see it, it becomes apparent that the tunnel and some unseen ancient creature that uses it is connected to disappearances in the neighborhood, and possibly going back centuries. Flanagan ties the film into the folklore he is evoking further with the use of the book The Three Billy Goats Gruff. This isn’t any Disney fairy tale though, but more akin to the darker folklore that usually ends badly. As with many of the older fairy tales, the otherworldly realm overlaps ours in places, and from these liminal spaces crawl entities that want to feed on us, trap us, steal us away, or have motives that we can’t even begin to understand.

The horror of mourning the loss of someone you love is one of incomprehension. Our minds are somehow incapable of dealing with a gaping hole in our lives, where that person resided. Flanagan taps capably into that mundane yet sanity-threatening horror, and aligns it with a Lovecraftian fear of the unknown, of dark realms full of creatures that can spirit us away at any moment. Just as we can’t really comprehend the sudden loss of a loved one or their continuing absence in our lives, neither can we comprehend these shadow spaces and the creatures that emerge from them. As Flanagan says: “The people who come in contact with that place that connects that realm and ours are in great danger, both of losing their lives, and their minds.”