This is the episode we should have seen coming; the episode that a series with the name Jordan Peele attached to it would produce. And even though the episode is not written or directed by Peele himself, his fingerprints of genre manipulation and subversion are all over it. And thus, like Get Out and Us, and like the often transcendent comedy of Key & Peele, The Twilight Zone on a whole, and “Blurryman” in particular, rise above mere respectful adoration for a beloved series, to become a game changer in its own, unique way.

It takes the Twilight Zone brand and effectively propels it into Trump America, where the horrors are made flesh, the subtextual is only slightly exaggerated, and the lessons, no matter how they are dressed up, be it horror, sci-fi, or comedy, are our own lives but in two dimensions: visible but untouchable, avoidable yet nihilistically destined to happen. Please excuse me, Mr. White, when I say, “we are the danger.” Rod Serling and Jordan Peele have made that evidently clear.

As a season finale to The Twilight Zone’s up and down first year, “Blurryman” puts the whole season into perspective and, bizarrely for an anthology show, connects the entire universe presented thus far. Not only does the main character literally visit sets and locations from previous episodes, but we, as an audience, revisit the themes and messages the previous nine episodes have tried to convey.

This approach makes the magnificent episodes stronger (see: “Replay”, “Not All Men”, and “The Blue Scorpion”), the good to average episodes better (see: “The Wunderkind” and “The Comedian”), and the bad episodes…well…less bad, simply because even in their failings, “Blurryman” puts them into the perspective of a wider message and not just a single episode. “Point of Origin”, a very bad episode, at least tries to say something and “Blurryman” justifies its existence (alas, “Blurryman” can’t save them all because “A Traveler” is a damn mess and, after putting the entire season into perspective, it is the one outlier that does not fit into the season-long narrative of addressing our mutating social landscape). 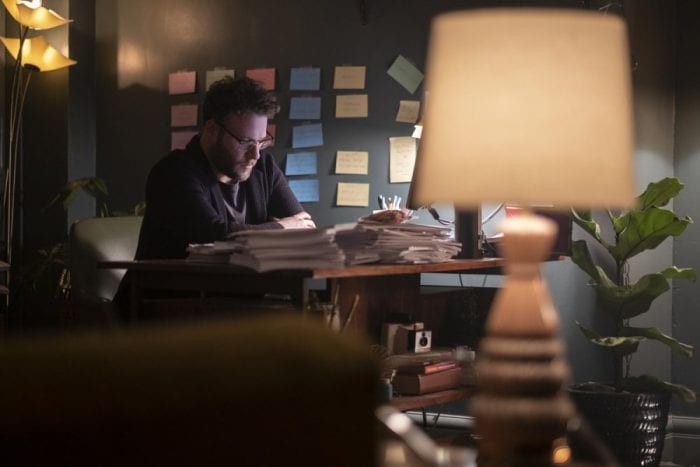 “Blurryman” opens, as the trailers for the episode promised, with Seth Rogen playing a writer who is struggling with an unspecified writing project. He berates himself, questions his skills, and starts to throw away post-it notes with his ideas. But then the word “mushroom cloud” ignites his imagination and he starts typing furiously about the apocalypse. A woman, presumably his wife or girlfriend, enters the room (played by Get Out’s Betty Gabriel). Rogen enthusiastically says that he finally has the idea!

When Rogen insists they go out and celebrate, he opens his curtains to find the outside world obliterated by what was probably a nuclear blast (the “mushroom cloud” he just wrote about). Now, as the viewer sits and watches this scene unfold, they start to wonder, “uh, isn’t that plot device the same exact thing as “The Comedian”? But before we can think too much about it, Jordan Peele’s Narrator begins to introduce us to the episode’s main plot. Until he stops, looks at the camera, and says “cut, this isn’t working.”

Cut to Jordan Peele himself telling the crew to take a break and that his opening narration needs some work. The struggling writer bit is, indeed, just an episode of Jordan Peele’s remake of The Twilight Zone: Rogen and Gabriel are just actors, Peele is just Peele, and the house, surrounded by nuclear devastation, is all just one big set. Peele asks to see Sophie, the writer of the episode (played by Zazie Beetz, who is not playing herself unlike the other famous faces).

In a touch of good sportsmanship, Peele plays himself as a little self-important and egotistical and Sophie struggles with his demands (in another cheeky reference to this self-flagellation by Peele, Gabriel says she is mad at Peele because “he has changed a lot”, hinting that the Oscar win for Get Out might have made him a little too self-congratulatory). Already submerged in the subversion of The Twilight Zone recognizing itself as a TV show, Peele also gives us the impression that he may only be partially doing this Twilight Zone reboot because he is an “important” person now, with things to say.

Sophie, an original Twilight Zone superfan, tries to burst Peele’s bubble by saying that superhero films and genre fare is childish stuff but that The Twilight Zone transcended it by making it for “adults.” Even the smug Peele has to admit this seems a bit too snobby and asks Sophie to rewrite his narration on cue cards for him to re-shoot and “he’ll make it sound cool,” arguing that his show is still, in essence, genre fare.

Once back on the set, Sophie’s new narration, as read by Peele, ends up being about her, and not the episode she wrote:

Picture, if you will, a storyteller, finally getting to tell the story of a lifetime. Except, the story is one of inexplicable terror and the lifetime is her own. Her name is Sophie Gelson. She has little patience for childish diversions or daydreams. But she won’t be able to tune out or turn away from what lurks, blurry, in the background of her own show. She is about to learn that when blurry comes to focus, there can be no escape from the fate laid out for her…in the Twilight Zone.

Everyone has a nice laugh and Peele says to really write the Narration so the episode shoot can keep moving. Sophie, despite insisting she actually didn’t write that, goes to write and is approached by an editing crewmember who says her referencing something “blurry” was a bit too on the nose since a “blurry man” kept showing up in one particular scene of the current episode. Sophie looks at the footage and indeed does see the “Blurry Man” in the background of a key library scene. But the editor also points out that she saw this same Blurry Man in other episodes of the show, including “The Comedian”, “Point of Origin”, and “The Blue Scorpion”.

As the crew breaks for lunch, Sophie is left alone to write and ponder the Blurry Man’s existence. However, as the set clears, so apparently does the world. Now suddenly alone on the Twilight Zone soundstage with no one answering her slowly escalating calls of “hello”, Sophie begins seeing the “Blurry Man” in real life and must run through all the iterations of The Twilight Zone via reconstructed sets, past and present, to avoid his advance.

To say “Blurryman is bold might be an understatement. It takes a lot for a show that is already taking on an out-and-out classic to reexamine itself and its importance only ten episodes in. But Peele and his producers do just that, commenting not just on the state of the world but of the necessity for entertainment to not simply entertain, but empower us. Regardless of how certain episodes turned out on an individual basis, The Twilight Zone in any incarnation exists as a hyper-real document of life, not throw-away fun. Much like when Jordan Peele said Get Out was a documentary, not a horror film, “Blurryman” and his Twilight Zone reboot itself, does the same.

This season’s purpose was already pretty clear: to provide social commentary on today’s world, specifically America. Some have resented being preached to, as reviews will show, but when given the chance, this reboot has excelled. Which is why “Blurryman” is such a success and rewards the viewer with its daring approach. One could see the move here by Peele to show how “important’ his show is as the height of hubris. The problem for the cynics out there though is: Peele is right.

No matter how overtly preachy or subtle the viewpoints displayed in prior episodes were (as mentioned above, some outright failed), the experiment that Rod Serling started and Jordan Peele is continuing is a noble and necessary endeavor. Ans to show the ultimate respect to The Twilight Zone’s creator, Serling himself makes an appearance.

In an episode full of twists (skipping out on simply ending the episode with a major twist, “Blurryman” builds itself on twist after twist), Sophie discovers she is actually living in an episode of The Twilight Zone, down to the fact that she is being broadcast in black and white and the Blurry Man is not evil but Rod Serling himself, trying to reach Sophie on an intellectual level. He explains that she takes her job so seriously as a writer because she knows what she does is important. And even though she is a two-dimensional character on a TV screen, she must become three-dimensional and learn a lesson. Mainly, that superheroes and genre fare exist with purpose, not as meaningless dreck, as Sophie first believed. Thus her “episode” is a teaching moment for her in the fictional world but also for those of us in the real world: words have meaning and power and the ability to entertain through fantasy can influence generations, all under the guise of “silly” sci-fi. 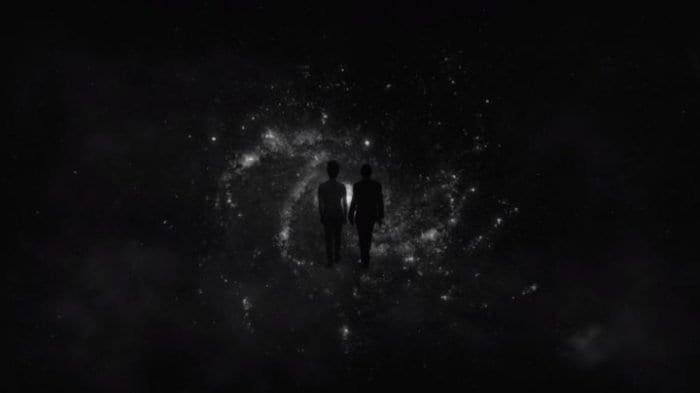 Instead of allowing Peele to conclude the episode as The Narrator, Serling himself delivers the narration, stating, in what might be a deliberate criticism of Bill Maher’s infamous and ridiculous “comic books got Donald Trump elected” rant of months ago:

What do we do when our world is turned upside down? When everything we thought to be true is ripped away, and we’re forced to face a new reality? Sophie Gelson has just awoken to the fact that when we put away childish things, we may be closing our eyes, instead of opening them. And that perhaps our only hope is to face all reality, a multitude of truths, not shrinking from that vital, arrogant, fatal, dominant “X” beyond imagination, but to embrace it. To open ourselves to the unknown, not the end of the story but a new beginning…for The Twilight Zone.

I could probably go on and on about this episode. And just like Peele’s directorial stints, this episode would benefit from multiple rewatches as there are layers and layers of in-jokes, clues, and easter eggs from prior episodes throughout. Most importantly though, Peele remembers what’s important: the story and its creator, portraying himself as comic and Serling as genius, letting the audience know that he will never replace him, just continue his good work.