The Binding of Isaac is about life and death. After far too many passes, with way too many words in them, I decided to open succinctly, completely forgoing any superfluous flourishes to describe a game that revels in its own blunt ambiguity.

If you bothered to sit through the pre-credit, crudely-sketched intro, you’d know you’re Isaac, a boy who is forced to escape through a trap door in his bedroom floor after the religious programs on television commanded his Mother to kill her corrupt, only child.

If you didn’t, eh, no worries. It doesn’t hinder your enjoyment of the game. As a matter of fact, my first few times through the game, I paid little attention to both the story and the multiple endings, which all seemed mostly the same to me at first glance.

Slowly, as I played through the game more, I started to notice subtle, little things — cryptic references, the answers to which, seemingly just out of my mind’s reach. It was about this time I also noticed the “Post-It” note each playable character had on their selection screen. Some of my characters had already achieved a thing or two, like whatever that inverted cross means. Perhaps when I took a dark path or two? 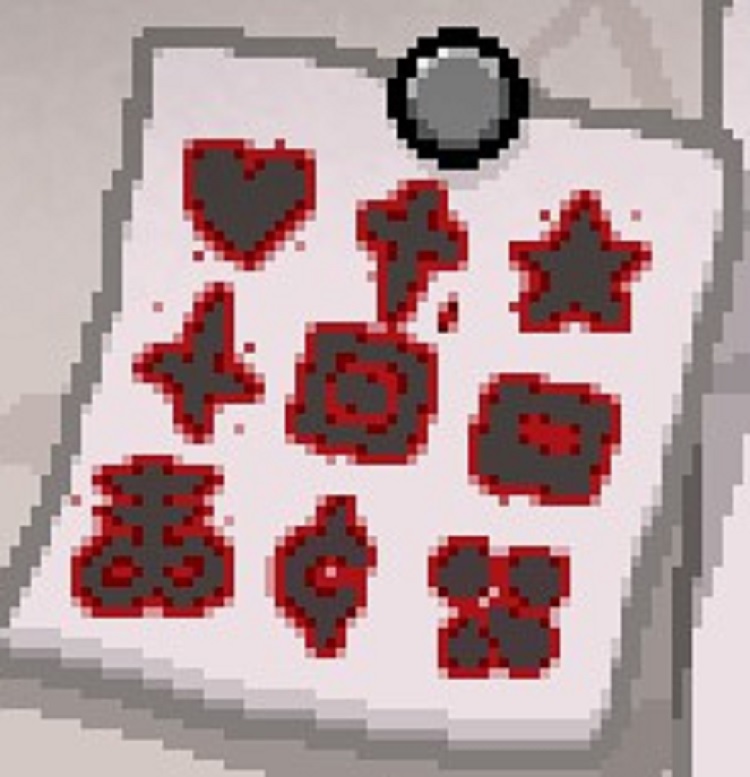 “Are You Sure You Want Me To Die?”

One time after I peaced-out on one of my over 1,500 recorded deaths, I hit Restart and saw that phrase flash briefly on the screen, realizing that I’d seen it before, as the familiar lullaby of a new Isaac game came to an end. Then it dawned on me that every time I started the game, I was shown some words or an image. Not unlike the mid-level, sketch-drawing cut scenes of childhood humiliation, that most people skip past to save precious seconds on their run time. I wondered why I never paid attention to any of it before. It was right there in front of me, but I just ignored it.

To be fair (and I am nothing if not fair when it comes to myself and my choices), it’s not integral to the success of your run through the game to pay attention to any of this. Isaac is one of these rogue-lite, randomly generated games that I didn’t even know was a thing when I played it for the first time. The genre stipulates that every time you play the game, all the rooms, enemies, items you find, bosses, etc. are all different. You can get a general feel of how a round in say, The Cave, might be but you won’t know exactly how shit is gonna go down.

I realize that’s a crude way to describe that, but again, that’s actually on brand with this game. There’s a lot of cartoon poop, pee, and vomit jockeying for screen time with all the subtle homages to the original The Legend of Zelda on display at any given moment.

At no point in Edmund McMillen’s masterpiece does the game go out of its way to tell you how to do anything. Even the starting room has four mostly useless control explanations scribbled on the floor. To someone like me, who grew up on classic 8-bit NES (and ColecoVision and Intellivision if we’re being totally honest about just how old I am) games, you know I appreciate a game that doesn’t hold the player’s hand. Then I chase children trying to catch Pokemon off my lawn.

That’s not to say the game is trying to be opaque on purpose. Quite the contrary, it’s actually respecting your intelligence. This game—that looks a lot like The Legend of Zelda—plays by a lot of the same rules, for example. They may not tell you that, but they leave even context clues for you to sort it out on your own. Not only that, the game guides you along so subtly, allowing you to use your basic gaming instincts to figure out a problem without having an annoying sidekick or a throbbing red arrow pointing to what you need to do. When you accomplish something, you will feel like you earned it.

At times, it will seem like dying is all that you do in this game. Some of the playable characters begin with barely any hearts (life), and the constant cycle of death and resurrection often seems harsh, although rarely unfair.

Dying is a part of life, and you’ll die many times in Isaac. Any game that keeps a tally of how many times you ‘Game Over,’ is being very open about its own difficulty. However, the more you die, the more you learn because, over time, if the same enemies seem to thwart you constantly, it leaves you with no choice but to pay attention, look closer, and observe their patterns. You evolve as a player.

Evolution is the name of the game here. You can’t win if you stay the same, helplessly weak character you begin as. When you start the game, Isaac is a blank slate, but with each item and power acquired, your character’s powers change, and additionally, your appearance physically changes (top hats, monocles, and a fez are all in play). Every subsequent item you snatch can either enhance or decrease your different powers. Your character can even evolve into a greater (for lack of a better word) “form” when you acquire specific sets of items, called synergies among us Isaac nerds.

You never know when you’ll suddenly be rewarded for doing something you may have considering innocuous. Pick up a certain number of Book items in one run and you’ll become a Bookworm. The game helpfully flashes Bookworm on the screen without elaborating any further on the matter. I might suppose a game with over 400 unique unlockable secrets might have all sorts of things like that hidden in it. You’ll just have to experiment.

As a well-documented creature of habit, it took me a while to embrace the art of experimentation in this game. As it will for you. Especially after you find a few items you like, and suddenly become almost resistant to trying something new. Whether it’s the fear of the unknown or the fear that it will ruin the weapon you currently have, you are likely to stand pat early on, and not try new things. However, you shouldn’t resist the unknown.

Sure, sometimes you’ll get a lousy power that turns your tears (did I mention you don’t use bullets in this game, you use your own tears to fight off the enemies?) from large powerful orbs of destruction to rapid-fire, low impact BB gun pellets, but that’s just what some people call a teachable moment. You’ll certainly remember what item just made your run ten times harder. That’s called experience, kids.

The Binding of Isaac is a game I became addicted to, and not just because of the gameplay that is basically an M-rated original Zelda dungeon generator, but the lore as well. What was Isaac’s story? Was it merely a modern retelling of the Biblical story where God tells Abraham to sacrifice his son Isaac as a test of faith or was it more? It felt like it was more to me. It felt personal.

There is an undercurrent of sadness that runs through the game. Isaac is neglected, abused, tormented, and riddled with self-hatred. He doesn’t just encounter Satan in Sheol, the Greek underworld. In some endings, you’ll see Isaac’s drawings on the wall with self-portraits giving way to pictures of Isaac slowly becoming the Devil himself. His Mother’s religious lunacy has convinced him, a small boy, that he is indeed corrupt and evil.

I found myself wondering if the story itself was something he manifested on his own. After all, the story is told through sketches, the same as we saw Isaac drawing in the opening cut scene. Has he used the drawings and his own imagination to escape the reality of his life? Is his slow descent into the cavernous depths of his house’s Buffalo Bill-sized basement a metaphor for abuse, mental illness, and depression?

The game’s creator is open to answering most questions regarding the story. All of his games seem to exist inside the same shared universe. In Isaac alone, there are references to other games such as Super Meat Boy and Gish. This is a man interested in telling you the story of his life through his art. This has continued with his more recent work The End Is Nigh, which I hope to cover one day as well.

I myself have theories on the story of Isaac and his Mother, who lived in a small house on a hill. Often I will randomly Google one the references to (several versions of) the Bible, Greek mythology, and the occult that the game tosses in liberally.

I don’t just play Isaac; I experience it. As someone who has played video games his entire life, I often find myself asking a very simple yet integral question when playing any game: “Am I having fun?” Amazingly, that simple question often gets overlooked. I’ll find myself mindlessly mashing away at buttons for hours not even realizing that I stopped having fun a long time ago. But not with Isaac. I never tire of the familiar journey that is always different.

Not only that, this game brings me joy. When you die, the tight controls are never the reason, so you only have yourself to blame, which means you don’t “die angry.” Are some rooms brutally tough? Are you caught at times ill prepared through no fault of your own? Absolutely, but that’s how shit goes sometimes. It may not always be fair, but if you can persist, pay attention, learn from your mistakes, all that evolution and experience will pay off.

In the end, what I want people to know about this game is that it is darkly comic, deeply personal, oddly affecting, layered with depth, and highly addictive. It doesn’t look away from the darkness, and it doesn’t take absolute comfort in the light, it just asks that you accept that you can only control what you can control.

The Binding of Isaac is life.