Sometimes it’s hard to be a fan. DC Universe announced less than a week after the series premiere of the critically acclaimed and fan-loved Swamp Thing that the show had been cancelled. There have been conflicting reports as to why this is. Many bigger outlets have gone to that old “creative differences” chestnut, while local North Carolina outlets (where Swamp Thing was filming) reported the whole snafu was over a typo involving a tax break. There’s also grumblings that executives at Warners didn’t like the pilot, and had little to no faith going into the premiere. Whatever the reason, it’s an unfortunate occurrence. The truth of the cancellation of Swamp Thing is probably somewhere in the middle of all the rumors. It’s tragic news because if the pilot was any indication, Swamp Thing is going to be an excellent…remaining 9 episodes. It’s so good, in fact, that while the rest of the entertainment world is speculating about what happened and why behind the scenes, 25YL will be diving deep into the swamp in the weeks ahead to continue our weekly analysis of Swamp Thing.

By the end of the pilot, everything had gone from bad to worse. After returning home to Marais, Louisiana, CDC Dr. Abby Arcane (Crystal Reed) teamed with disgraced biologist Dr. Alec Holland (Andy Bean). Together, they tried to discover what exactly was making people in Marais sick and what connection it had to the swamps surrounding the town. They discover that someone was throwing a mutagen accelerant into the swamp on purpose, thus causing the swamp to come alive and fight back. Just as Alec goes out to retrieve drop boxes of this accelerant from the swamp, he is gunned down, taking two shotgun blasts to the chest. The mystery shooter sped away in his boat, thinking Alec was dead in the water. Abby heard the commotion and headed out into the swamp from Alec’s lab to look for him, only to be attacked by the tentacles of the swamp itself. Abby barely escaped the water (or did she have a little help?) to then run away screaming from the first full reveal of the “swamp thing” itself.

Swamp Thing‘s “Worlds Apart” starts exactly where the pilot left off. Director Len Wiseman drops the audience directly back into the action as Swamp Thing crawls out of the water, running into the darkness as he sees police lights in the distance. The Cronenbergian body horror elements from the pilot are well intact right from the start as Swamp Thing stumbles lost through the darkness, almost like Dr. Frankenstein’s Monster. The Swamp Thing, just like Frankenstein’s Monster, cannot bear the sheer monstrosity of its own reflection. Swamp Thing’s “Worlds Apart” is unrelenting as he attempts to rip the plants and vines from himself, thinking there will be flesh underneath, but the new flesh (plants, tentacles, and vines) always grow back. Long live the new flesh indeed.

Len Wiseman returns from the pilot to direct “Worlds Apart,” which only helps in keeping the fantastic Southern Gothic tone of Swamp Thing intact. Co-showrunner Mark Verheiden co-wrote “Worlds Apart” with Doris Egan. Little Susie Coyle just may be the key to understanding “the swamp thing,” or as she calls him “the man in the dark.” There seems to be some sort of symbiotic connection between the two of them: she has visions that Harlan passes off as sickness-induced nightmares that are really visions of Swamp Thing faltering.

Nothing seems to be going well for anyone. Abby is having nightmares, continuing to torment herself over the death of Shawna Sunderland. The way that Swamp Thing gets inside viewers’ heads is really frightening. Jump scares aren’t cheap when they’re inventive and well done. Abby’s “Shawna” dream may send some popcorn flying across the room if viewers aren’t careful. The effects work again is just extraordinary; not just for TV. Swamp Thing continues to look and feel cinematic.

Harlan has his hands full at the hospital in Marais with two more sick patients with the same symptoms. The sickness is spreading, and in a town full of as many secrets as Marais, it may prove difficult for Dr. Arcane, Harlan, and journalist Liz Tremayne to solve, now that they’re minus their biologist.

The Sunderlands, Marias’ patriarchs, aren’t having the best of times either. Maria made it quite clear to Abby last week how she felt about her returned presence in Marais. Avery finds her the following morning after Alec’s death in Shawna’s bedroom, depressed and despondent. Abby goes against Liz’s concerns and goes straight to the Sunderland residence as a doctor, asking her one-time father figure to give her a professional courtesy. In Alec’s lab she needs to get to his findings to solve the disease. Not surprisingly, Sunderland stonewalls her. He does so with the same twinkle and soft-spoken Southern charm that calmed the entire town during the emergency town meeting during Swamp Thing‘s pilot. Abby’s no idiot though. She knows when she’s just been told to back off.

After the explosive events of Swamp Thing’s pilot, everyone seems to be lost and grasping for answers. When Maria does get out of bed, she goes straight to the mysterious fortune teller Madame Xanadu, who has mystical powers beyond imagination. She’s an extremely popular mystic, who is said to have invented the Tarot herself. Brian Tyler’s score continues to tighten the tension during the Madame Xanadu scene especially. The jump scares in this episode, combined with the practical effect work, is just heart-stopping. Xanadu hits the nail on the head in regard to the feeling of the entire episode. Whatever the hell is going on in the swamp, it has tipped the balance of light and dark. That could lead to grave consequences. 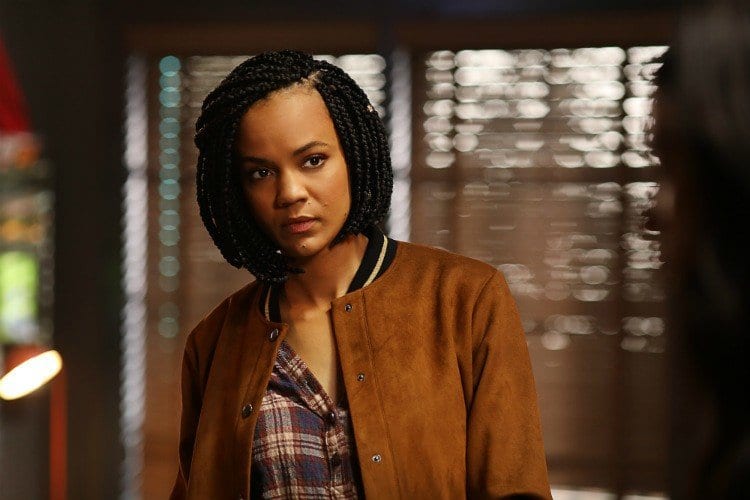 “Worlds Apart” is another great episode that keeps ramping up the terror and raising the stakes, with just enough in between the action to not make Swamp Thing feel like a constant assault on the senses. Daniel Cassidy, aka Blue Devil, is introduced in the episode, played charmingly by Beverly Hills, 90210‘s Ian Ziering. He was one of Alec’s only known friends and he kept his laptop and other belongings there. The episode uses those moments to further explore (through pre-recorded tapes) the blossoming romance between Abby Arcane and Alec Holland that was all too cut short…or was it? Swamp Thing doesn’t give too much time to relax, however, as there’s a lot going on in Marais.

In another special guest role, “Worlds Apart” introduces Dr. Jason Woodrue (Kevin Durand). In a reveal everyone saw coming, Avery Sunderland is responsible for the accelerant being introduced to the swamp. Woodrue was hired to produce the accelerant to be put in the swamp waters to make plants grow faster, crops produced quicker, cosmetics, more land to develop; as Avery puts it himself, it was for “things to monetize.” This reveal goes back to the very nature of Swamp Thing. Everyone knew what was going on in the swamp, but did not know the who, what and why. Those are answered in “Worlds Apart.” Man should not “play God” and tamper with nature. Swamp Thing itself is an indictment on the rape of the earth for monetary gain, represented by Avery Sunderland. Series regular Jennifer Beals shows up as Matt Cable’s mother and the sheriff of Marais. Just like everyone else, she disapproves of Abby and doesn’t want her around her son.

In the climax of “Worlds Apart,” Susie heads back out in the swamp to find the “swamp thing” that Harlan wrote off as a dream. Susie escapes the hospital and hides in the back of a boat that heads out to the area of Skeeter Cove where Alec was murdered. The tension builds again followed by a quick, unexpected turn to hard R-rated visceral violence that will leave your jaw stuck to the floor. In Swamp Thing, like Pan’s Labyrinth (2007), the people are the true monsters here. It isn’t any “creatures” that are doing anything but protecting their own existence, by any means necessary.

After a vicious murder on board, Susie hightails it into the depths of the swamp on her own. She’s being pursued by a murderer and the set becomes a character again. The killer stalks little Susie through the woods like Jason Voorhees. Too bad ol’ Jason never had any superhuman competition looking for the good ones. If the pilot set the standard for new body horror on television, then “Worlds Apart” proves that Swamp Thing was no fluke.

As all good serials do, the episode leaves viewers with a bombshell revelation that will keep them coming back. Abby “rescues” Susie, coming face-to-face with the creature itself. The “swamp thing” apparently tells Susie that he was scared…and his name was Alec.

That will surely leave Abby to ponder even further just what the hell is going on in the swamp. In due time, all questions will be answered or they won’t. This is a horror show whose central mystery is combined with amazing body horror and an ensemble cast like no other. Swamp Thing may already be officially dead, but there’s still plenty more story to tell. See ya in the swamp.