I have always had an ambivalent relationship with Pride. For me, Pride is not about “rainbow-washing” our streets, with companies slapping an LGBT+ flag on their products and calling it a day. Even as an out-and-proud lesbian, I’ve struggled when attending Pride parades as it is easy to feel lost within a crowd. For me, Pride has always been a more private ceremony, a moment to reflect on who we are. Above all, it’s an opportunity to honour the individuals who have helped us forge our own identity. This year, I have decided to pay tribute to a character that has helped me deal with the confusion, anxiety, and anger that often comes with being queer: Detective Rosa Diaz from Brooklyn Nine-Nine, portrayed by Stephanie Beatriz.

In a world where so much can make us feel frustrated and tired, Brooklyn Nine-Nine is a show that has become many viewers’ happy place. Its genius lies in creating characters that on the surface appear one-dimensional, but as the series progresses you find yourself completely enveloped in its comforting atmosphere. From the very start, Rosa was my point of reference. I had never seen someone who expressed (or rather, didn’t express) emotions like that. Rosa is a leather-clad ball of angst. She would rather destroy a computer with an axe then ask someone to help her fix it. Her co-workers know little to nothing about her life outside the precinct and if they ask, they are met with a blunt no: “I hate small talk. Let’s drink in silence.” She is extremely hesitant to open herself up to the world and would ultimately rather be left to her own devices. 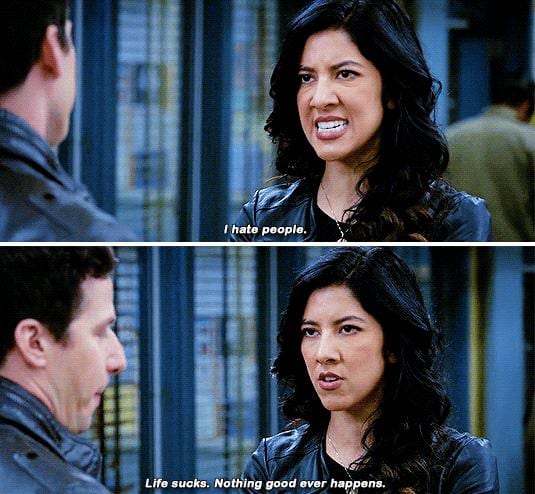 During season 5, Rosa revealed a major fact about herself that shed light on why she clams up so frequently and passionately. In “99,” Rosa came out as bisexual in a scene that was refreshingly to the point: “I’m dating a woman, I’m bi.” In literally six words, Rosa let out a secret that had been bubbling inside her since she was 13. Anyone who is part of the LGBT+ community knows that coming out is not just one single event. It’s a continuous process that happens every time you meet someone new. There is always that fear of judgement lying underneath the surface. For someone like Rosa, this is her greatest nightmare: having to express something so emotional, an integral part of who she is, to people who she secretly cares deeply about.

When she first comes out, it’s to the ever-inquisitive Charles. After pestering Rosa for information about her love life, a female voice on the phone discloses Rosa’s bisexuality. Rosa then informs Charles that he will need to give her time to assimilate the fact that she has come out to someone.

Later on, when Rosa decides to come out to the entire precinct in “Game Night,” her big moment is not sentimentalized at all. Whereas in other TV series, a coming out scene is often somewhat over the top and dramatized, Rosa’s coming out is true to her character: spontaneous and cut-to-the-chase. Brooklyn Nine-Nine proves that coming out nowadays should not have to be a dramatic moment. Indeed, Captain Holt remarks on how much easier Rosa’s coming out is than his own back in the 1970s. But then, of course, he is a big part of that acceptance.

I realized I was gay around the same time that Rosa did, when I was 13. During my time in high school, I was ostracized for being different. At that time, I did not know what that difference was and could not see where I fit in. It was only when I moved to a different school and learned about the LGBT+ community that I realized it was my queerness that cut me off from my peers.

I remember a particularly painful trip to Paris where my fellow classmates tried to pressure me into kissing one of the male French exchange students. It’s a vivid memory of me forcefully saying no in French and then proceeding to, as Rosa puts it, “just stand in the middle of the room and [not] say anything.” Those first three years of high school left me somewhat scarred and for a long while anger was the only way I could express what I was feeling. I’ve said some awful things to people I adore, not because I was angry at them but because, like Rosa, I pointed the blame on myself. 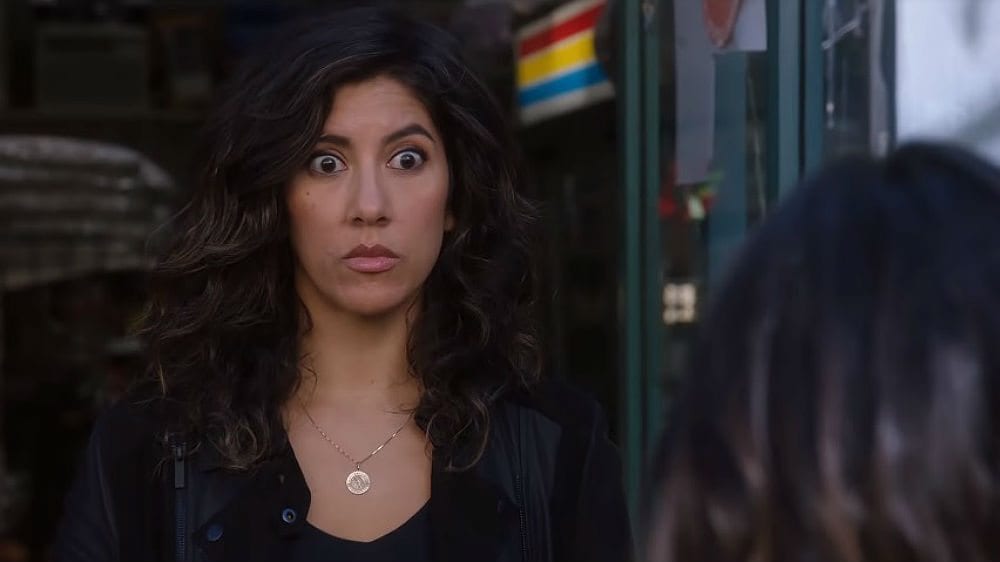 This is why Rosa is so important to me. For her, anger is not always a negative emotion; it is a catalyst that signals her vulnerability. She shouts and snaps at people, but it is because she loves them and does not want to let them down otherwise. In her eyes, Rosa is afraid that by presenting her true self to people, she is also giving them the opportunity to attack her innermost feelings. This is most evident when she has the tricky task of telling her parents she’s bisexual.

Coming out to her parents in “Game Night” is more difficult than coming out to her friends. Rosa enlists fellow detective Jake Peralta to help her by inviting him to dinner with her parents for emotional support. Instead, it all goes haywire, as Rosa’s parents believe that Jake is Rosa’s boyfriend and express their relief that she is not dating a woman. At this point, Rosa breaks down, admits she’s bisexual, and asks them to still see her as the same person. Her parents don’t understand and Rosa is left to fight her internal conflict. Nonetheless, during the end of the episode Rosa’s father comes to see her at work and tells her that he now realizes how important this was to her, and that he fully accepts her new partner. Her mother, however, still needs some more time. 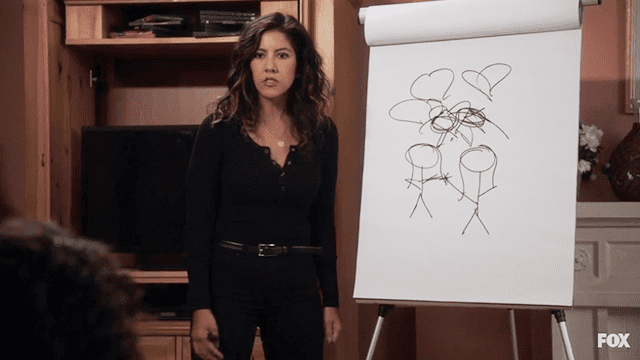 I tear up every time I see this episode because it reminds me of how crucial the concept of family is to the LGBT+ community. I’m lucky enough to have wonderful parents and a sibling who welcome and support me, but some members of my external family do not know or died without knowing. At the very end of the episode, Jake finds out about the outcome of Rosa’s situation and invites all the other detectives to have a “family game night.” Sometimes, members of your own family can cut you off and you need to create your own. The beauty of being LGBT+ is that you can have a family outside of your own: people who will be there for you and who share the same point of understanding.

Another reason why I identify so strongly with Rosa is that she is a queer woman of dual heritage. My mother is English and my father is Spanish, so I’ve always been caught between two cultures. “Home” is not just one place for me, particularly in the times that we live in. Rosa is a Latinx woman, and Stephanie Beatriz has recalled how playing Rosa was essential in furthering representation of queer Latin-American women, a demographic that is largely stereotyped in the media. As a young teenager, one of my LGBT+ icons was Santana Lopez from Glee, a feisty cheerleader whose background is not dissimilar to Rosa’s. As I grew up between Spanish and British cultures, seeing characters switch between two languages and two lives gave me a massive boost in confidence and encouraged me to be proud of both my identity as a lesbian and my biculturism.

Brooklyn Nine-Nine should be celebrated for creating Rosa Diaz and a big shout-out given to the actor who portrayed her. Stephanie Beatriz is a bold and brilliantly candid activist who has not been afraid to step up and criticise the lack of accurate LGBT+ representation on the small screen. Overall, Rosa and Stephanie have taught me that my frustration and anxiety is valid. I am not part of the mainstream, but I am part of a creative, vibrantly inventive community that is growing every day. There will still be days where I feel like bottling it all up, but at least I’ll have Rosa Diaz to remind me that it’s ok to simply talk to someone and that, as Virginia Woolf says in her character study Jacob’s Room: “Blame it or praise it, there is no denying the wild horse in us.” 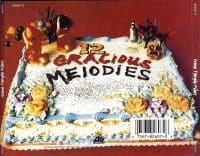