As with most of my favorite R-rated films from childhood, I first saw Heathers (1988) when it aired on HBO. I was 13, in the 8th grade and in love with Christian Slater. I mean who wasn’t after The Legend Of Billie Jean (1985)? And I thought Winona Ryder was just the coolest thing in the world after seeing her in Tim Burton’s Beetlejuice (1988). She was already a counter-culture icon and she was only 16 years old. In fact, I think one would be hard pressed to find a Gen-Xer who didn’t, and who still don’t think, the Slater/Ryder combo was beyond very. As I have gotten older, the movie has only taken on more layers of meaning for me. Let’s take a closer look at Veronica (Winona Ryder), color symbolism, and the importance of critical thinking skills in the film Heathers.

I loved high school. I found it to be super fun. Heck, I was a cheerleader, on student council and I was a class officer. High school could definitely be fun, for sure. I also found high school could be just as stressful as it could be fun. I worried a lot about making my friends mad at me for something and getting kicked out of the cool kid crowd.

Being afraid to speak one’s mind forces one to censor themselves, which when done repeatedly leads to self-censorship becoming an almost automatic thing. You begin to keep your thoughts to yourself. We can see this with Veronica during the scene in the cafeteria when Heather Chandler (Kim Walker) peer pressures her into forging the love letter to Martha Dunnstock (Carrie Lynn Certa) from Kurt Kelly (Lance Fenton).  Veronica is obviously resistant to the thought. This is quite clear by the way she reacts to Heather saying “I need you to write a hot and horny, but realistically low key, note in Kurt Kelly’s handwriting and slip it onto Martha ‘Dumptruck’s lunch tray.” Veronica protest, crying out “Shit, you guys! I don’t have anything against Martha Dunnstock.” It doesn’t matter to Heather though, as she reminds Veronica that “you don’t have anything for her either.” Veronica sheepishly says she’ll think about it, but Heather orders her not to think.

Then Heather C. proceeds to tell Heather Duke (Shannen Doherty) to bend over so that Veronica has something “to write on.” Veronica dutifully writes the words recited to her by Heather C. intended for, and ultimately delivered to, Martha Dunnstock; a perfectly forged version of Kurt Kelly’s handwriting.

Now let’s go back to the last order Heather C. gave to Veronica, because I think this is one of the main themes found throughout this film; people in control of the status quo—or indeed anyone who wishes to gain and/or keep control of a group of people—would rather the people around them not think too much on their own. This is what drew me to the character of Veronica, and Winona Ryder,  but that’s another story altogether. Veronica is the one protagonist in the film that ultimately uses her intellect. 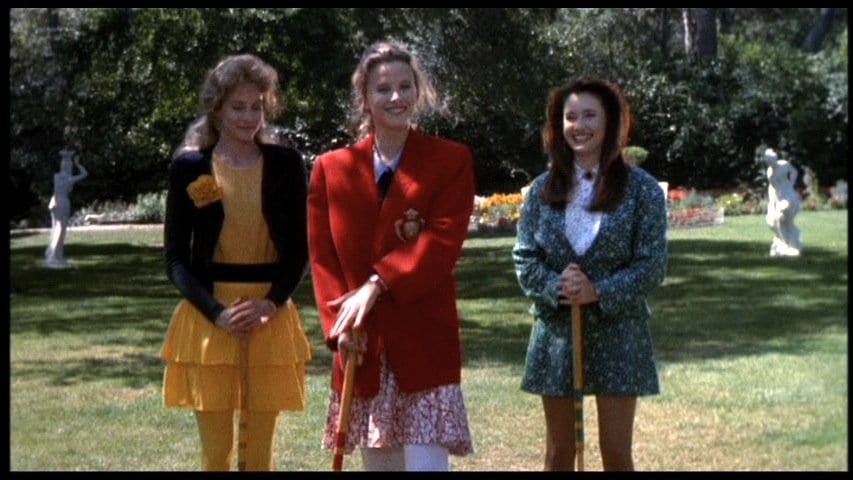 Colors are used quite symbolically in this film. Each Heather has her own color. Heather Chandler is red, Heather Duke is green (later red), Heather McNamara (Lisanne Folk) is yellow, and Veronica is the color blue. These colors really do represent the characters on an elementary and basic level.

Red is the color of fire and blood, so it is associated with energy, war, danger, strength, power, determination as well as passion, desire, and love. It is a very emotionally intense color. When used as an accent color, it stimulates people to make quick decisions.

Heather C. is the first red Heather and the leader in the group,  which is made clear in what she says to Veronica during the same lunchroom scene as I referred to earlier. “You wanted to to be a member of the most powerful clique in the school. If I wasn’t already the head of it, I’d want the same thing.” However, all the Heathers and Veronica wear red at some symbolically appropriate part of the film. We will discover more on this as we continue the discussion color.

Yellow is a warm color that arouses cheerfulness. In heraldry, yellow indicates honor, friendship and loyalty. Yellow’s meaning is also connected with cowardice; i.e., yellow belly. Yellow is often perceived as an unstable and spontaneous color. Studies have shown that shades of yellow are visually un-appealing over time because they lose cheerfulness and eventually become dingy. 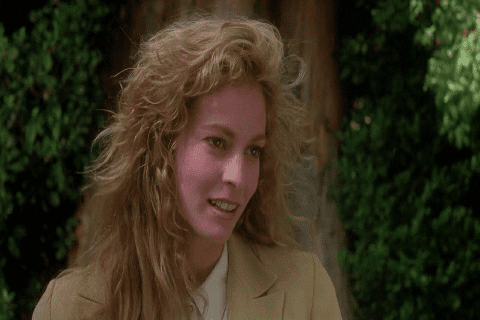 Heather M. is our yellow Heather. She also is a reflection of the color she wears. Heather M. is the most friendly of all 3 Heathers. Admittedly, this isn’t necessarily saying much. She also seems to be the most sensitive and as the color yellow would suggest, the most spontaneous and unstable of the three. This can be seen in the choices she makes throughout the film and in the exchange with Veronica when she’s asked, “if everyone jumped off a bridge, would you?” Heather M. just responds with “probably.”

She is the only one of the 3 Heathers to actually try and take her own life after being chastised by Heather D. and her classmates for reaching out for help on a popular teen call-in show (Hot Probs) which was listened to by both Heather D. and Veronica the night before. It is when she is at school and she tries to swallow the bottle of pills in the bathroom that she wears something red for the first and only time in the film. This makes sense because one often thinks of suicide as a way to take back power and control in and of their own life. Since I mentioned Heather Duke, let’s move on to the color green. 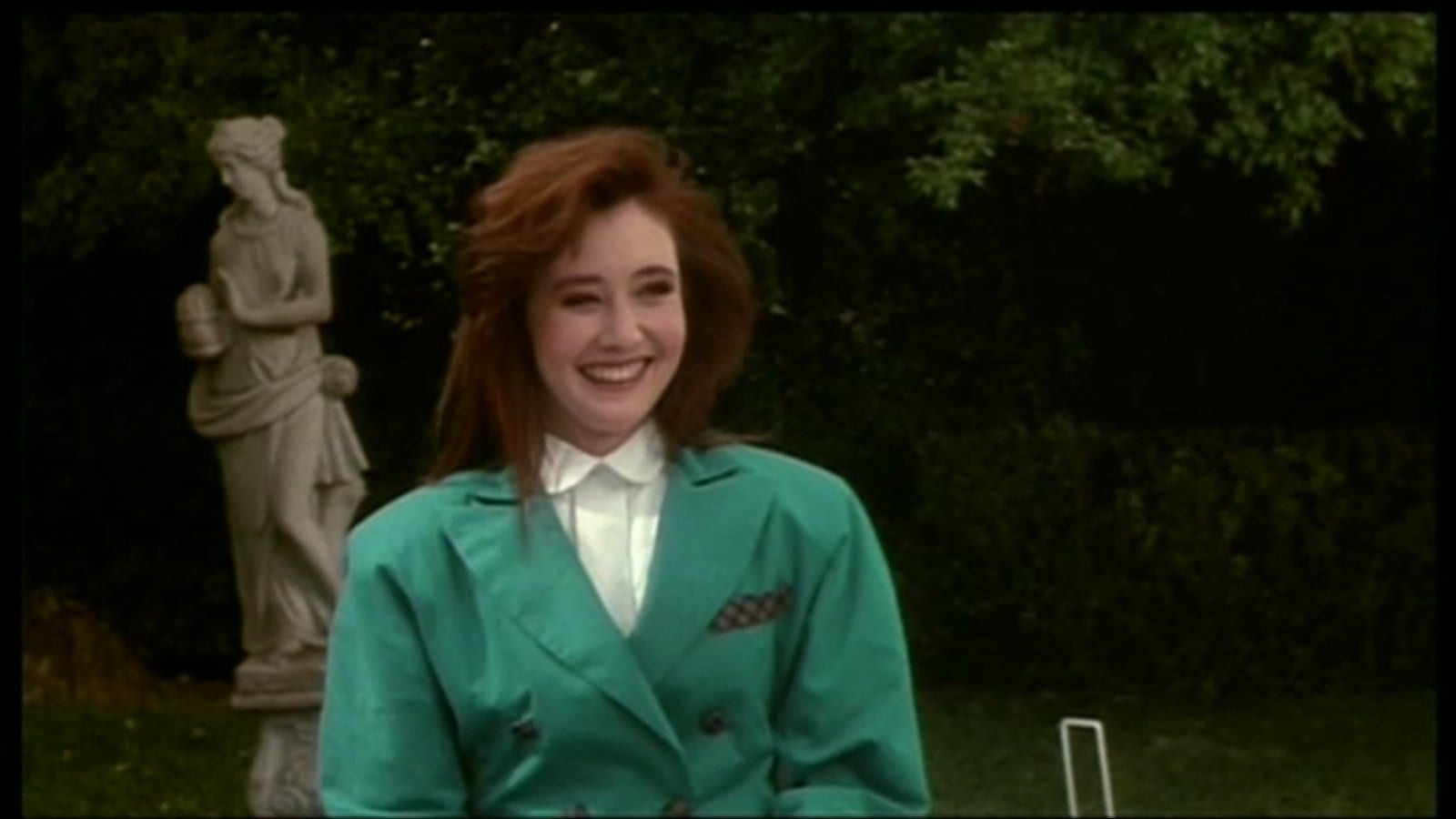 Dark green is associated with ambition, greed, and jealousy. Yellow-green can indicate sickness, cowardice, discord, and jealousy. Olive green is the traditional color of peace. Heather Duke’s greens run the gambit. At the beginning of the film, she wears dark green hues. Although it may seem I am stating the obvious here, Heather Duke is quite a jealous girl who would like nothing more than to have the power she perceives Heather C. to have. We can see this in the exchange between her and Heather C. at the beginning of the film. Duke asks Chandler if she’s gonna knock her out in their game of croquet and then asks “what are you doing to do heather?” Heather C says, “first you want to be red, knowing I’m always red…” You can see this again in the way in which she reacts to the death of Heather C. while praying next to her casket at the funeral when she prays aloud that “I prayed and prayed every night, wondering if you would listen…but now that Heather is dead, I see you understand. Praise the Lord! Hallelujah!”

Heather D is also the first Heather to claim the color red and Heather C’s perceived power after her death. She quickly loses her “urge to purge” and begins to try and control those around her. We see this in the way she gets everyone to sign J.D.’s petition and in the way she reacts to Veronica when Veronica refuses to sign it, asking Heather “why can’t you just be a friend? Why do you have to be such a mega-bitch?” Heather D says back, “because I can be.”

Right off the bat, Veronica was my favorite character because Ryder was portraying her, but I quickly fell in love with the character as much as the actress playing her. For one thing, she was the only one who was not a Heather either in name or in personality, as we see right off the bat in her first exchange with J.D. When he asks Veronica “you a Heather?” Veronica cooly responds with “No. I’m a Veronica…Sawyer.”  We see it in full again during the conversation Veronica has with J.D. outside the Snack Shack as well when she exclaims that, “I”m on my way to a party at Remington University. No, my life’s not perfect…I don’t really like my friends.” J.D. cooly responds, “I don’t really like your friends either.”

And with the use of the color blue, the film further sets her apart from the rest of the group. So let’s look at the color blue. Blue is often associated with depth and stability. It symbolizes trust, loyalty, wisdom, confidence, intelligence, and truth. Blue is considered beneficial to the mind and body and often produces a calming effect. It is also used to symbolize piety and sincerity. As opposed to emotionally warm colors like red and yellow, blue is linked to consciousness and intellect.

There is no question from the moment we see her using a monocle while writing in her diary that first time that Veronica, like Ryder herself, is not only cool she is super smart. This point is driven home all throughout the film. One example is in what she says to J.D. after their game of strip croquet that her “parents wanted to move me into high school out of the 6th grade, but we decided to chuck the idea because I’d have trouble making friends. Blah blah, blah. And now ‘blah blah blah’ is all I ever do! I use my great I.Q. to decide what color gloss to wear and how to hit two keggers before curfew.”

Veronica isn’t perfect either.  I mean, she is a murderer, and she too believed things because she wanted to. It is often much easier to let someone else shape your worldview than to apply your own critical thinking skills. This is pointed out to her by J.D. after they kill Ram and Kurt when he says, “You believed it because you wanted to believe it. Your true feelings were too icky and gross.”Veronica is the only protagonist in the film who uses her critical thinking skills for not just her own benefit but the benefit of the masses; in this case, her fellow students. It is these very same critical thinking skills that finally help lift the veil from her eyes so she could see J.D. for what he really was. Veronica yells, “You’re a rebel? You think you’re a rebel? You’re not a rebel. You’re fucking psychotic.” It is a truly beautiful and clap-worthy moment at the end of the film when Veronica, completely covered in ashes, approaches Heather Duke and takes the red scrunchy from her hair. Veronica kisses her flawless cheek, leaving a big soot mark. and says to her, “Heather, my love, there’s a new sheriff in town.”

(All information on color was via http://www.color-wheel-pro.com/)