James Whale might be one of the most famous people you’ve never heard of. With a directing filmography divided into two sections, that of classic horror films, such as Frankenstein, Bride of Frankenstein, and The Invisible Man, and “the other ones”, as unfair as that is, Whale’s efforts are so ingrained in pop culture that they almost feel like folk tales, of which oral traditions and mainstream saturation prevent us from knowing the true authorship of them.

Similarly, Gods and Monsters, a semi-fictional tale depicting the end of James Whale’s life, is an award-winning film seemingly lost in the annals of history. Released in 1998, the film’s director and screenwriter, Bill Condon, won the Best Adapted Screenplay Academy Award while the film netted acting nominations for Sir Ian McKellen as Whale, only then on the verge of superstardom at the young age of 59, and supporting actress Lynn Redgrave. Yet, like Whale himself, the film has become more of a cinematic footnote; retrospectives and deep analysis of it are hard to come by in this digital age of reflection and nostalgia.

While I can’t accurately speak for the veracity of James Whale’s life as depicted in Gods and Monsters, nor as it is depicted in the fictional book of which the film is based, “Father of Frankenstein”, by Christopher Bram, some research into Whale’s life and even his filmography can extract the necessary details to see what is representing truth and what is dramatic license in the film that doesn’t exist as an all-encompassing biography of the man, but as a brief summary of his life at the end of it. 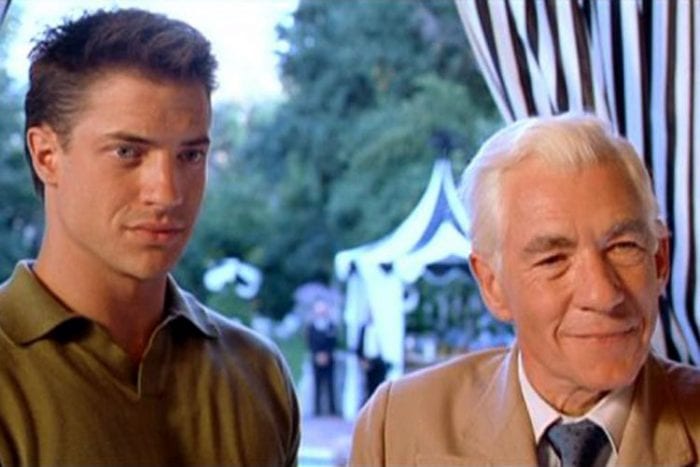 The essentials to know about James Whale is that he grew up in the lower classes of England. Before fighting in the trenches of World War I, he was an aspiring artist, specifically drawing, and, upon release from the military, pursued the arts in his own time as well as on the stage and, eventually, on the big screen, both in Europe and in America. Despite a healthy output of films that settled on no particular genre, his 1931 hit Frankenstein, its sequel, the classic Bride of Frankenstein (1935), and the iconic The Invisible Man (1933), became what he would be known for, much to his frustration.

The other key fact to know is that Whale was openly gay, which was not exactly accepted in the years of his prime, the 1930s, and it is rumored, though never proven, that Whale’s eventual fall from grace in Hollywood was due to his homosexuality. “Father of Frankenstein” and Gods and Monsters takes place in the late 1950s when Whale was suffering significant health issues and was, even then, becoming that dreaded footnote to film history. To increase the drama, the book and film add a fictional foil named Boone, played by Brendan Fraser in the movie: a young, hunky war veteran who does Whale’s gardening and strikes up a friendship with Whale through sessions of portraiture. Also, Gods and Monsters primarily uses Whale’s film Bride of Frankenstein as a metaphor for Whale’s life: the perceived effects of his sexuality and the personal struggles with artistic merit and loneliness.

Comparisons of James Whale’s life and the subtext of Bride of Frankenstein are legion. So it is inevitable that Gods and Monsters would use Whale’s most popular work as a continuous metaphor, even when scholars, historians, and even Whale’s lovers debate how much commentary on homosexuality and social acceptance went into that film. I, personally, ascribe JRR Tolkien’s viewpoint on his most famous works and their perceived allegorical nature to Whale’s work as well:

“I much prefer history – true or feigned– with its varied applicability to the thought and experience of readers. I think that many confuse applicability with allegory, but the one resides in the freedom of the reader, and the other in the purposed domination of the author.”

Though Tolkien also admits allegory is inevitable as real-life experience subconsciously enters the fray when being creative, he did find allegory itself to be deliberate and he steered clear of it. I feel Whale did the same, primarily because he was not a closeted homosexual and therefore did not attach shame and “monstrous” behavior to his way of life. As Gods and Monsters points out, the “monstrosity” of homosexuality is perceived by others as just that, and not by Whale himself. And in the case of Bride of Frankenstein and, most specifically the original Frankenstein, the horrors of war, of literally burying yourself deep into the ground (the trenches), a mixture of dead bodies and living souls co-mingling, is where the true terror is mined from. Any additional subtext regarding sex and hedonism is an unintentional bonus, for lack of a better word.

In the film, and likely in real life, Whale was never fighting the pain of a forced secret. In reality, while others were reading into his films or his perceived “brazen” lifestyle as he suffered at the end of his life due to debilitating strokes, Whale is more tortured by his experiences of war and loss, and not just the loss of life, including the macabre death of his friend/lover Barnett in the trenches of WWI, but of the loss of his faculties, including his ability to draw. What is an artist who can’t create art?

Thus the film uses the subtextual readings of homosexuality in Bride of Frankenstein as a feint, and instead uses the concepts of friendship and the horror of loss from that film as the primary subject matter, much to everyone’s surprise (the characters in the film as well as the audience). In the end, Whale’s homosexuality is hardly an issue, at least for him, and in the film’s great twist, is just a means to a grisly end.

Whale hopes Boone will kill him after he makes a sexual advance and thus relieve him of his physical and emotional pain. Whale uses Boone and the perceived hedonism of his sexuality that Boone initially despises, as shown in the clip above, to force him into action. This is achieved by not only physically advancing on Boone with kisses to his shoulders and neck, as well as a quick grab of his genitals, but by having him don a WWI era gas mask, all while naked, as if performing some interpretive theater of war-based lunacy and kinky role play.

What Whale does not expect is that his burgeoning friendship with Boone has increased Boone’s understanding of the lifestyle he once despised and what Whale saw as a convenient patsy to relieve him of pain, a hard-headed, homophobic lunk, had indeed become a true friend, much like the blind violin player was to The Monster in Bride, seeing through the perceptions and finding the soul beneath. When Boone refuses to kill him, and Whale realizes he misjudged a good man as someone he could simply use, Whale instead kills himself, realizing a true friend would not wish to harm him.

Whale did indeed kill himself in real life, and his suicide note did mention the amount of pain and suffering he was enduring. By creating a fictional character like Boone, we can draw out some of the broader emotional concepts of Whale’s final days. While they are 100% false, they still honor the spirit of the man who suffered for many, many reasons and, as mentioned above, was threatened to become all but forgotten.

Gods and Monsters has a lot going on in during its runtime and topics I haven’t addressed include the darker sides of Hollywood and the cyclical nature of fame, fortune, and importance. Gods and Monsters provides judgment of institutions but not individuals, which is a refreshing change of pace, allowing the protagonists of the piece to have their positive intangibles as well as deeply seeded flaws. Everything is grey in a world that contains creative gods and perceived monsters that are all too human and all too real.