‘Five Reasons Why Neon Genesis Evangelion is a Classic‘ is now available on Audio, written and read by John Bernardy, exclusively for our Patreon supporters. For just $3 a month you will have access to our full library of Audio content, plus three new uploads every week. To sign up visit our Patreon page: https://www.patreon.com/25YL

Here at 25YLSite, we handle a lot of heavy lifting. Analysis, interpretation, deep discussion, introspective interviews…you name it, we’ve got it. “Favorites” takes a lighter approach to the material we normally cover. Each week, we will take you through a list of favorites—whether it’s moments, scenes, episodes, characters, lines of dialogue, whatever!—in bite-sized articles perfect for your lunch break, a dull commute, or anywhere you need to take a Moment of Zen. So, sit back and enjoy this week’s offering: John Bernardy’s five reasons Neon Genesis Evangelion is a classic.

The art shows kids in their plug suits, and the trailers show the purple and red robots fighting weird looking monsters. Technically, it is that kind of show, but it’s also much deeper than the typical mecha anime of Evangelion’s era.

Sure, the show is funny—and it can be really funny (in particular I’m remembering a joke involving toothpicks)—but after a certain episode the jokes stop. We find out all the anxiety built in from the production staff is what’s been inside our main characters.

If you think about it, a second impact happened fifteen years ago and all of the adults remember it? That’s going to be traumatic. And all the kids were born into this damaged world, being raised by the traumatized adults. A life extinguishing event had happened to the world in Evangelion and everyone is trying to overcome their trauma in various ways. The whole show may be obtuse or abstract, but you always know what it’s feeling at its root—even when you’re trying to figure out why the villains are named angels, or why exactly 14 year-old children are necessary for piloting the Evas.

And this whole time we’re seeing the progression of show creator Hideaki Anno’s nervous breakdown as he plans episodes to cover how Shinji tries to find his value over the course of the series. Shinji practically stands in for Anno, and this document of a breakdown turned what could’ve been a better-than-average mecha show into an auteur experience. 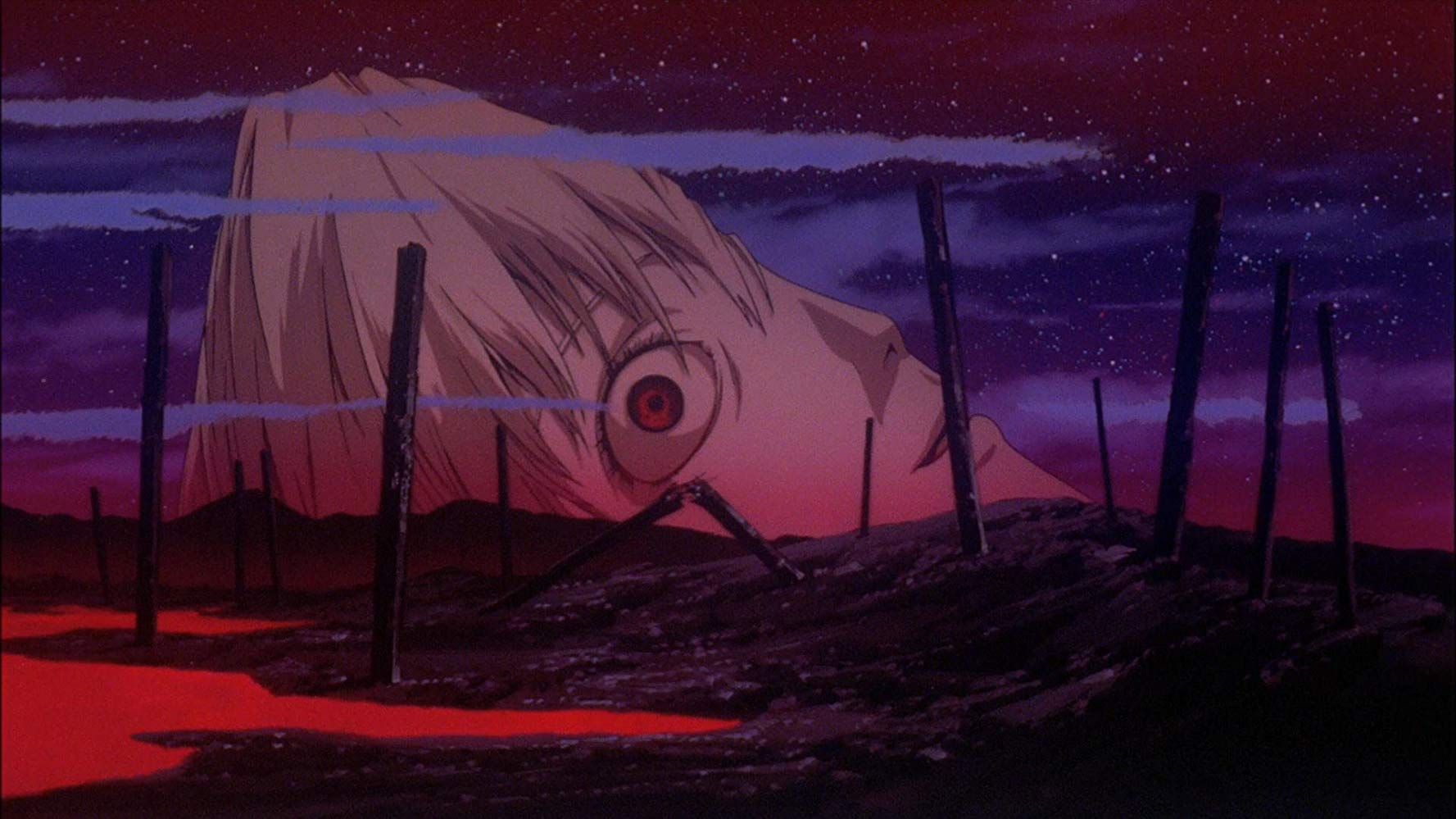 Evangelion famously had issues behind the scenes. Not only was production company studio Gainax running out of money well before the end of the show’s production, the staff wasn’t dealing well with the stress either. It was an amazing decision by the animators to not try to hide it. They put their stress into the show and it really came through. We were seeing a desperate studio trying to finish a show before it died, and we’re watching a society try to save itself from third impact. It made the unbelievable elements of kids and robots feel more real than it should. Everything was on the line for the characters just like it was for the staff.

Prolonged shots of one single frame of animation could have just been about trying to save money, but those long unending shots were embedded with anxiety and existentialism. Those scenes were filled with dread, pathos, and thoughtfulness. It was very Lynchian, in the way that Twin Peaks Season 3 scenes just kept going, but it let your mind wander and consider things.

The stillness in Eva allowed us to take in the emotional resonance of the characters processing their situations. We could feel the characters thinking their way through the scenes. Their inner struggles felt much more lived in by the audience. 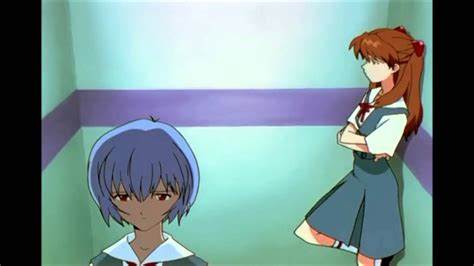 I am a giant fan of those title cards that pop up in the middle of the episodes. Some are a word, like “Magmadiver,” and some are a full sentence, like “She said, ‘Don’t make others suffer for your personal hatred.” That last one’s original Japanese translated to “The Value of Miracles,” so there’s definitely some changes made to the American version. Who made the changes? Studio Gainax. They knew words carry different connotations in different languages, and changed things up for each countries’ audience.

It’s a fun game to explore the mood in me when I read the Japanese translations next to the English titles. There’s “Weaving a Story,” and “Seele, the Throne of Souls.” There’s “Ambivalence” and “The Choice of Life.” There’s a meaning connoted by each title alone, and then they effect each other in most interesting ways. If you’re entranced by Eva, I highly encourage you to look into this.

The guitar-based battle themes when the angels attack will be the first thing that gets stuck in your head. Or maybe it’ll be any of the contemplative piano-based Rei theme arrangements, or the variations on the old jazz standard “Fly Me to the Moon” which seem at once both on-point and incongruous, or even the instrumental arrangements of the main theme—“Cruel Angel Thesis.” All of Shiro Sagisu’s score will get in your head eventually.

“Spending Time In Preparation” will always make me think fondly of episode previews. I can close my eyes for “Both of you, dance like you want to win” and see the synchronized Eva attacks beat for beat. When all the lights of Japan go out to power an Eva unit’s super weapon, the simple melancholy in the piano arpeggio gets me every time. So does the subdued french horn and trumpet fanfare that plays as the buildings of Tokyo 3 rise back into their positions after being lowered for Angel attack.

But if I had to pick just one song, it’s a track on the S2 Works soundtrack collection only titled “M-3.” Because it kind of destroys me. The song plays during one of the final scenes involving the Mass Production Units and the less spoilers I say about that the better. If you’ve seen End of Evangelion you’ll know exactly what kind of things are happening to who and how, and why the song may be effecting.

The score may feel like an acquired taste at first, but watch about four episodes and that music will be in your blood.

I know the original voice cast is not going to appear in the Netflix version (a blatant tragedy in voice actor recasting!), but the cast that AD Vision assembled is worth celebrating. They’re legends, after all. Sure, they ‘d sometimes veer into shades of silly anime acting best exemplified by Dragon Ball Z, but it was 1995. That was expected. What wasn’t expected was how restrained those moments of overacting were. Nothing happened at DBZ levels of over-the-top unless the pathos of a character’s internal struggles demanded it. What Eva did was age up the level of voice acting. This cast paved the way for great voice casts like the team on Cowboy Bebop.

Allison Kieth’s Misato and Tiffany Grant’s Asuka are the ones everyone’s going to miss the most—I can hear that particular condescending tone of “third child” right now. Even Spike Spencer’s Shinji will be missed. Shinji may be scared to do anything, but Spencer was the one who put the humanity into the character’s anxiety.

I have no idea if the Netflix dub voice cast will be welcomed or not, but I’ll give it a try. It may sound a little too serious by comparison to the originals, but I’d be curious what a voice cast will sound like with the modern style of voicing that Eva began. And who knows, it may just work.