‘In Defense of Shinji Ikari’ is now available on Audio, written and read by Alex Boruff, exclusively for our Patreon supporters. For just $3 a month you will have access to our full library of Audio content, plus three new uploads every week. To sign up visit our Patreon page: https://www.patreon.com/25YL

This is the story of a boy—a sad, confused boy entering his teenage years with little in the way of social skills and even less in the way of self-esteem. He is terrified of confrontation, but also of any kind of emotional intimacy. He doesn’t know how to connect with the people around him, because he’s too afraid of their judgment to just be who he is. His hang-ups sometimes hurt the people who care for him, which only makes him hate himself more, continuing the cycle. He knows—it isn’t true, but he knows it the way you know these things—that he’s too weird and weak and pathetic to be of any value to people unless he could do something special.

If I haven’t tipped my hand already, I’m talking about myself. Some of these issues have waxed or waned with the intervening years, but specifically I’m thinking about my teenage self.

Thank goodness my teenage self did not also have to Get In The Fucking Robot, like poor Shinji Ikari did. 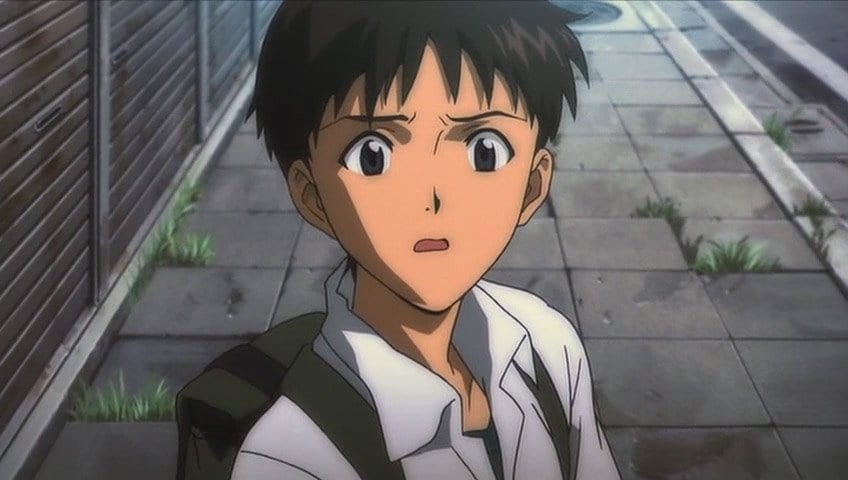 I don’t remember exactly how my middle-school fascination with anime began, but I do remember that in the summer of 2003 I bought (or got my mom to buy, rather) the three-disc DVD set of Neon Genesis Evangelion—the hugely influential 26-episode apocalyptic saga of teenagers recruited to fight mysterious alien monsters called Angels using enormous mechanized weapons called Evangelions. It arrived in the mail one morning and I stayed up until past midnight on that very same day watching the entire series. I don’t know how my young brain survived that much mind-fuckery without cracking open like an egg, but it did, and thus began my attachment to Evangelion, and in particular to its protagonist, Shinji.

I could spend paragraphs dissecting the nature of a “hero” figure—specifically as opposed to an “anti-hero”—in modern pop culture, but I think anyone who’s familiar with Evangelion can recognize and agree on the conceit that Shinji is not your typical hero. It’s not just about the qualities I pointedly attributed to both him and myself in that terribly clever opening paragraph of this article. It’s about the entire way he behaves when placed in the heroic role. He is excruciatingly passive. He pilots his Evangelion and puts himself in mortal danger simply because people tell him to do so. He lost his mother at a very early age, and his father has been mostly absent until the start of the series, when he returns to Shinji’s life not in a paternal role at all, but as the cold, ruthless commanding officer—but instead of this giving Shinji a desire to prove himself by being The Best like a typical anime orphan, it just leaves him without any emotional support.

He often reacts with an uncomfortable but realistic level of fear and stress to the weight of the world being placed on his shoulders, and NERV, the secret defense organization for which he works, doesn’t seem to have a single psychiatrist on staff to treat him or the other traumatized teenagers they employ. He hardly even shows any curiosity about what exactly the Angels want or what will happen if they get it. The entire plot thread uncovering the secrets of NERV and the true nature of the Angels and Evas is driven by secondary protagonist Misato Katsuragi, with almost no involvement on Shinji’s part. Most gratingly to some, he complains about piloting the Eva a lot and insists on multiple occasions that he’s done being a pilot, but it’s never long before he finds himself back in the cockpit, following orders again, because he doesn’t know who he is or what he’s worth if he isn’t an Eva pilot.

That’s the hero of our science-fiction epic: a kid who doesn’t save the world because of his desire to fight the good fight or his ambitions of greatness or because he is The Chosen One, but because he simply doesn’t have any other way to define himself. 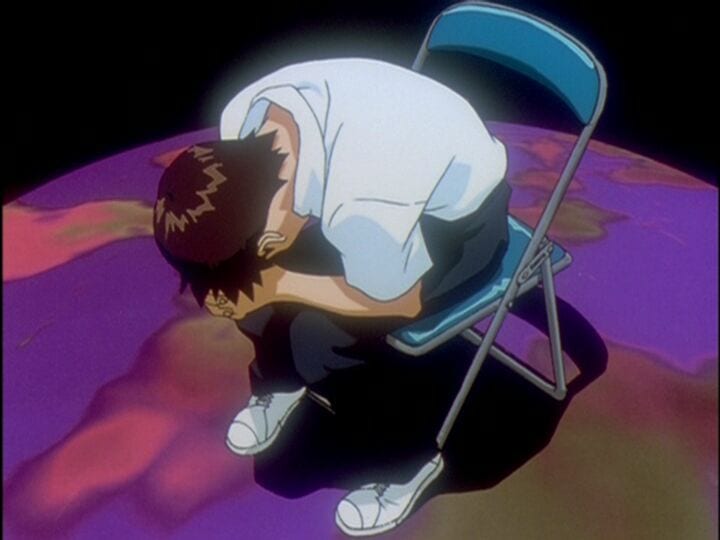 Naturally, characterizing the main protagonist of a giant-robot-action-show in such a way was bound to rub a lot of people the wrong way, and Shinji remains an enormously divisive character within the Evangelion fanbase and anime subculture as a whole. Ultimately, though, for all that on a superficial level Evangelion follows in the footsteps of many more conventional giant-robot-action-shows, at its heart it is a different kind of story. This is perhaps most clearly indicated early on in Episode 2 when we see Shinji’s Eva Unit 01 for what it is, not a robot at all but a scary-looking humanoid creature hidden in cyborg armor—a perfect metaphor for the show’s interest in the messy, unpleasant nature of people.

Shinji isn’t a typical hero because this isn’t a typical kind of story. Underneath all the science-fiction trappings and highfalutin symbolism and obscure religious iconography, Evangelion is a story about how sometimes the most difficult thing in the world is connecting to other people. Keeping it vague, when the plot finally reaches its climax (presented in two different variations: one in the final two episodes of the show, and another in a feature film follow-up called The End of Evangelion that is just as dear to my heart), the entire resolution hinges on Shinji’s perspective on the nature of interpersonal relationships and his own value within those relationships. The fate of humanity, as it turns out, doesn’t come down to who can punch harder or who has the cleverer plan, it comes down to whether this one sad, unremarkable human being can see the value in living—Shinji has fought to save the world all this time, but can he ultimately save it from his own angst?

Seeing someone so akin to myself—not my idealized self, but to the less flattering elements of my nature—occupy such a pivotal role in a story of such apocalyptic scale really spoke to something in my developing psyche, in a way that I think, in the long run, has helped me deal with my own depression and anxiety. Obviously, I don’t have the enormous pressure of saving the world on my shoulders like Shinji does, and I’m fortunate to have a much healthier support structure as well, but I still share his stubborn self-loathing.

I rewatch The End of Evangelion about once a year—not by any specific plan; it just tends to work out that way. Life never goes on too long before I feel the need to revisit the conclusion of Shinji’s story, to remind myself not to give up on life. It’s not just a story about someone I see as very similar to myself. It’s a story about someone who embodies things I don’t like about myself, and about how those things do not mean we don’t deserve happiness, that we cannot bring happiness to those around us, or that we cannot one day achieve happiness for ourselves.

“After all, you are alive, so you will always have a chance to be happy.”