‘Neon Genesis Evangelion: Rei and Kaworu’ is now available on Audio, written and read by Aaron Ploof, exclusively for our Patreon supporters. For just $3 a month you will have access to our full library of Audio content, plus three new uploads every week. To sign up visit our Patreon page: https://www.patreon.com/25YL

I am crucified with Christ: nevertheless I live; yet not I, but Christ liveth in me: and the life which I now live in the flesh I live by the faith of the Son of God, who loved me, and gave himself for me.

“This is the self that can be seen, and yet this is not like that which is myself.”

“But what are the two of you within my heart?

“We are the hope, that people may one day be able to understand each other.”

For all of the multifaceted characters of the Neon Genesis Evangelion cast, Rei and Kaworu are definitely the most enigmatic. Rei hardly speaks throughout most of the series. Her deepest inner thoughts are shown in monologues that we see in only a couple of episodes. And she shows no form of agency until she sacrifices her own life for Shinji and stands up to Gendo and refuses to be a doll. Kaworu receives even less time to leave an impression. Yet both of them, for all their mysteriousness, leave an overwhelming impact. When examined closely, though, Rei and Kaworu are closely related to a deeper exploration of two New Age concepts: the soul and the ego. Through Rei and Kaworu’s own exploration of their egos and souls, Shinji reaches self-actualization.

On a narrative level, Rei serves as the house of the soul of Lilith, the mother of the Lilim, or mankind, while Kaworu houses the soul of Adam, the first angel. Both characters meet near the escalator in Episode 24:

You must be the first child, am I correct? You are Rei Ayanami, and you are the same as I am. How interesting that both of us have ended up in the same form as the Lilim for life on this planet. 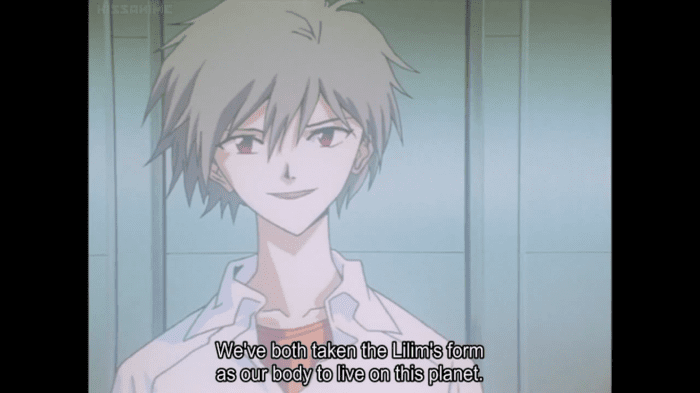 The souls of both Adam and Lilith, are contained within their manufactured bodies. Rei’s current body comes from the clones that Ritsuko helped to create while Kaworu has a matching dummy plug that is used in the S-2 Evangelions.

Dummy plugs are a scientific attempt at the duplication of a thought process. But as seen when they are activated in Episode 18 and End of Eva, they operate solely on raw savagery. Rei and Kawrou’s humanity is completely discarded. They are purely egos.

According to Carl Jung, the ego is our personality. The Bible describes it as “the flesh.” In the New Age, we are more than simply this; we have another part of us that lives on: the soul or the Christ-Consciousness. In Galatians 2:20, St. Paul differentiates between these two. While he (his persona) has been crucified with Christ, his true self, or Christ-Consciousness, still lives within him. It is not his “I” or ego that lives, but his other self. He owes this to the Son of God.

In Evangelion, Kaworu is that son. He is a blatant Christ figure. His death is a sacrifice that leaves humanity with a hold on the future. As he tells Shinji in Episode 24, “This is my wish. Please, destroy me. Otherwise you will be destroyed. Only one life form can be chosen to evade the destruction and seize the future. And you are not the existence which should die. You need the future; it is what you live for. Thank you Shinji, my life was meaningful because of you.” 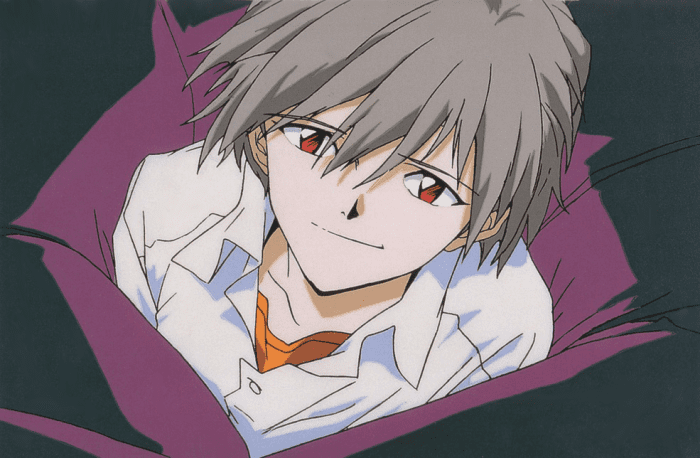 As a Christ figure, Kaworu willingly gives up his life so that mankind can live and seize their own destiny. Furthermore, as a truly divine being, Kaworu gives Shinji and the rest of the human race unconditional love. He turns his back on S.E.E.L.E. and sacrifices his physical existence for the sake of a race he is only barely beginning to understand.

Rei also willingly sacrifices her life for Shinji when she activates the self-destruction of her own evangelion, and it is during this moment when her second incarnation reaches self-actualization. The tears that she sheds are a testament to that. Rei’s struggles with her own ego and her true purpose are explored in a key moment before this, during her monologue in Episode 14:

The “things” that Rei “possesses” are her life (ego), and her soul. Her “ego” is a vessel for her “heart” or Lilith. All the flowers that are alike are a metaphor for the endless vessels that have been duplicated to house (Lilith). 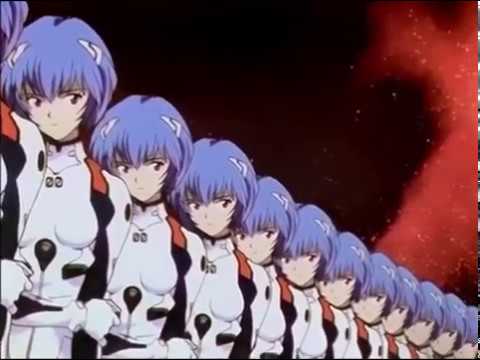 The “me that can be seen,” yet feels as if it is not “herself” is Lilith. Each time Rei incarnates into a new vessel, her own soul grows. Even though her memories are not carried over, we know that her emotions and substance are, as Rei crushes Gendo’s glasses and refuses to be his puppet, instead devoting her existence to Shinji.

When Rei carries over Lilith’s soul and Adam’s body and soul (taken from Gendo’s hand and Kaworu’s severed head), a new divine human is born. The giant Rei is human, as Makoto observes. It rises over the entire NERV facility until it reaches Shinji, who is fixed in a crucified state by the S2 Engine Evas. Shinji’s ego starts to self-destruct, and Third Impact is ushered in. Keele states in a moment of triumph, “Through the destruction of the ego of until 01’s pilot, humanity shall now be completed.” As Shinji screams repeatedly, “I can’t take it anymore, I can’t take it anymore,” the spirit of Kaworu leans out of Rei’s body and comforts him. With Kaworu there to calm him, Shinji’s ego is destroyed, and we enter into his head space.

Rei and Kaworu then guide Shinji through third impact, with Rei serving as Shinji’s “heart.” The one that “embodies his hopes and dreams.” Since humanity has reverted to one consciousness, this Rei (or Lilith) serves as the collected souls of humanity. Yet as Shinji learns that in order for him to grow, he must face reality once again, Rei warns him that people will feel pain. He says that’s all right, he doesn’t mind. Kaworu and Rei tell Shinji that they are the “hope that people will one day be able to understand each other,” and they are the words, “I love you.” Shinji realizes that these promises are like a “prayer,” that they can’t possibly last forever, but knows that in order to feel true happiness, he has to risk disappointment. The Rei and Kaworu being dies, and Shinji returns to life.

Even after this, with her giant head severed and resting in a sea of LCL, Rei continues to watch over Shinji. Her image appears over the water and watches as Shinji struggles with his ego once more. One can only surmise that Kaworu’s own being still rests somewhere within her soul, guiding this new world of man alongside her.