So it’s Saturday, and the world is going to end just after tea time. What’s everyone up to in the world of Good Omens then, this close to the Apocalypse? As it’s possibly the last day on Earth, everything is a bit chaotic. Let’s do a rundown of where everyone is in their final hours.

Let’s start with Adam Young and his motley crew. The kids in the group that don’t happen to be the children of Lucifer are finally starting to realize that Adam might be…a bit off. I’m not sure if they really understand the gravity of the situation until their nearly unhinged leader starts to levitate up towards the sky. If not then, it’s when he strips them of the ability to talk by making their mouths disappear. Whatever the case, it’s clear that Adam is definitely starting to come into his full power.

Since Adam is about to really start shaking things up, let’s discuss what the angels and demons are up to. Aziraphale and Crowley are both being tracked all over hell and back. The archangel Michael stumbled upon the pair’s eons-long friendship so now angels and dukes of hell alike are trying to capture them. Crowley and Aziraphale would rather avoid a huge war, instead of waiting to see who wins it. As a pacifist, I’ll have to agree with Crowphale on this one. Speaking of trying to avoid a fight, I’d like to point out that Crowley escaping a real-life conversation by jumping into a phone line must be the supernatural equivalent of wearing headphones on the subway to avoid people trying to talk to you. I applaud his dedication to avoidance.

Now on to the “people” that want the apocalypse to take place. In this episode—“Saturday Morning Funtime”—the lovely International Express Man, Leslie (Simon Merrells) has to deliver his last two packages to Pollution (Lourdes Faberes), who has taken over Pestilence’s post since they retired. Pollution revels in the glory that is a deeply polluted river. Which oddly enough, for me has been the creepiest scene of any of the four horsemen so far. Then Leslie must deliver a message to Death (Brian Cox/Jamie Hill). Sadly the runaway lorries finally take down poor Leslie on his way to deliver the message, which ominously only reads “Come and see.” Death laughs and departs, supposedly leaving Leslie to ghost around his delivery route.

My favorite side arc in this episode is definitely Leslie and his dear wife Maud (Indra Ove). The Couple are only shown for a moment, but the actors do a wonderful job of conveying how much they adore each other. Leslie and Maud’s relationship for now is done, which is sad, but we can move on to the brand-new relationship that comes from this episode. 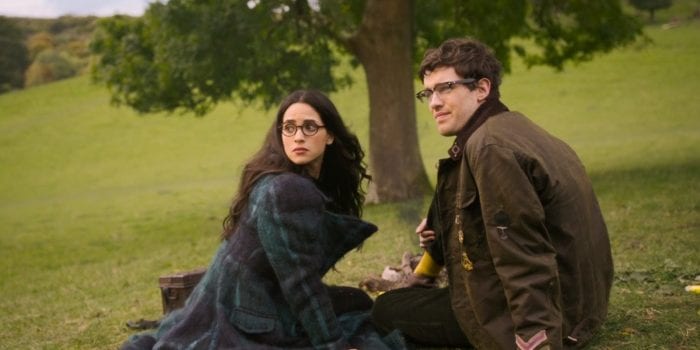 I of course mean Newton Pulsifer and Anathema Device, whose biblical relations were foretold centuries ago by Anathema’s great-great-great-great-great grandmother in her Nice and Accurate Prophetic book. I thank my lucky stars my ancestors didn’t have visions of my sex life, but I digress. I’d say that the relationship between these two characters happened too quickly, but we could all sort of see it coming. A strapping young witch hunter who’s still wet behind the ears, and a beautiful witch with a good head on her shoulders? A match obviously made in heaven.

If you’re ever caught in an unheard-of tornado in Britain with a bumbling witch hunter who has never kissed a girl, odds are you’re probably going to end up under the bed with him as well. Don’t kid yourself, Agnes hasn’t made an incorrect prophecy yet. It also looks like Sergent Shadwell and his harlot of a landlord might have a little relationship brewing. Maybe we’ll figure that relationship out in future episodes.

In the end, the only character we’re really worried about is dear Aziraphale, as he’s been sucked up into a heavenly portal, after uttering the only “fuck” you’ll probably ever hear from an angel. For that bit, I’m nearly grateful that he got snatched up to the pearly gates. We’ll have to just pray he comes back to us in one piece in the next episode.