Long before Nicolas Winding Refn burst into the American collective consciousness with Drive (2011), he was making films about bad people doing very bad things in his native country of Denmark. Known today for stylistic influences such as David Lynch (Lost Highway, Blue Velvet) and a cinematic approach that is both beautiful and horrific. His new “film in ten parts” on Amazon Prime Too Old To Die Young (2019) really showcases how far aesthetically the auteur has come in 25 years behind the camera. His English-speaking work is more celebrated (and reviled) than his earlier, Danish-speaking films. He is right up there with Lars Von Trier (The House That Jack Built, Antichrist) as one of the most consistently controversial directors working today. Refn’s subject matter is beyond grisly, but his films are shot in such a beautiful uniquely cinematic way. The early work shouldn’t be forgotten though. Refn may not yet have completely turned into the stylistic master that he is today, but Pusher is a fantastic film showcasing a week-long cocaine and heroin-fueled nightmare: the longest night of a darker soul. 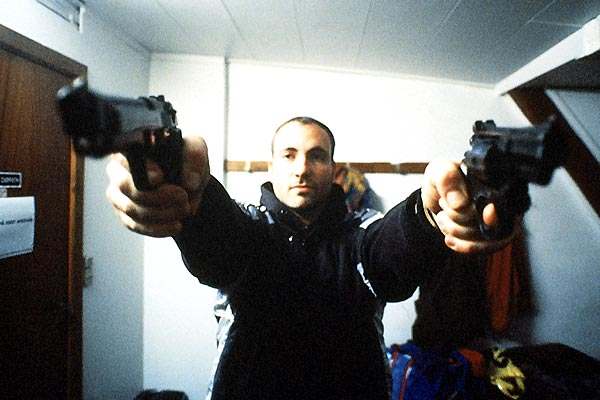 Frank (Kim Bodnia) is a drug dealer on the streets of Copenhagen. He and his partner Tonny (Mads Mikkelsen) spend their days dealing and using heroin and cocaine in the capital city. They are such good friends that they seem almost lovers. They can finish each other’s sentences and tie each others shoes. They’re business partners but also best mates. That’s why it’s shocking later in the film when Frank beats Tonny to an inch of his life over just the notion that Tonny spoke to police. They were brothers and they loved each other, but as any good drug addict knows, what the audience is really mistaking for familial camaraderie and a family of misfits and outcasts is really just a means to an end. It’s a shared love of a substance. That’s the real love affair.

Backing up from the frenzy for a moment, Pusher is really Frank’s story. Refn places the viewer in a fly on the wall perspective that feels of its time (the mid-’90s) but also no way dated in 2019. It’s a precursor to New French Extremist work like Irreversible (2002) in aesthetics and wears it’s Quentin Tarrantino (Pulp Fiction, Kill Bill) influence proudly on its sleeve. Nicolas Winding Refn has always been proud of his influences. The frenetic pacing of Pusher is definitely a love letter to the American indie cinema of the ’90s, but it never dips into Go (1999) levels of pastiche. It’s a love letter to America but it’s distinctly European cinema. Often in Refn’s world, there’s one singular hero that’s almost a living, breathing archetype, or no good guys to root for at all if viewed from a certain perspective. Stand close enough, and everyone is the hero of their own story.

Pusher is more than just a film. It’s a thematic trilogy that is wholly unique in cinema, Danish or otherwise. Nicolas Winding Refn took the themes introduced in the first film and made two sequels over the next decade. Each of the subsequent films features a different supporting character from the first Pusher at a different point in their lives taking over the lead role. The Pusher Trilogy drives home the point that there really is something rotten in Denmark. The city streets, as Refn paints them, are cold and unforgiving. With Blood on My Hands: Pusher II (2001) focuses on Mads Mikkelsen’s Tonny as he gets out of prison and tries to reconnect with his father. Coming back to finish off the tale is Frank’s best friend turned enemy in Pusher: Milo. Pusher III: I Am The Angel of Death (2006) catches up with an older Milo who is is still running drugs but trying to stay sober while doing it. Pusher III follows the now cartel boss/cake baker as he tries to plan the perfect party for his daughter’s 15th birthday and juggle a botched drug deal at the same time.  The films are still the best look at the criminal underbelly of Copenhagen, at least as the Danish auteur sees it in his mind.

Frank is a drug dealer and an addict. Life is going really smoothly. He spends his days hanging out with Tonny running and doing drugs; laughing and talking sex and film at the pub, store, and in the car on drug runs. All is fine in the drug world until it isn’t.  Everything can change in that lifestyle on the drop of a dime.  As is often the case, Frank gets just a little too bold and gets busted by the police. He has to throw away 200 grams of heroin he had just fronted off his childhood friend and local drug dealing gangster Milo (Zlatko Buric). His henchman Radovan (Slavko Labovic) is soon on his tail as Milo’s patience with his old chum runs thin.

Pusher is a perfect crime movie that starts out in a dark place and only goes darker. There’s nothing redeeming to be found in the film, but that doesn’t make it any less engaging. These may not be close to model citizens, but they are always treated like people. That goes for all the heroes, monsters, and doe-eyed bystanders throughout Refn’s entire body of work.  If there’s a good person in the film it’s Vic (Laura Drasbaek). She’s a heroin-addicted champagne girl—not a prostitute—that deep down is Frank’s one true romantic love. It’s an abusive relationship as most addicted ones are. Frank treats her (and everyone else) like utter shit the majority of the film, but he’s also sweet at times and very providing to her and she does the same for him. They help each other out, but not exactly the way that sounds. Everything is some sort of level of abuse, but there’s a real attraction and friendship at the center of their relationship.  When things finally get to the point of no return at the end of Pusher, it’s Vic that Frank decides to try and run away with.

Frank has way too many problems in Pusher, but the biggest one is Milo. In the span of a week he goes from owing 50,000 Kroner to 280,000 Kroner. Milo being like every drug dealer in the world wants his money and wants it yesterday. It’s hard not to watch the frantic energy that Nicolas Winding Refn so perfectly captured his first time behind the camera and not see the arrival of an auteur. Stylistically, he’s long outgrown the handheld fast-paced films. He’s often criticized now for the extremely slow pace of his work.

Pusher often feels like a study in human absurdity. There’s a lot of moments that mirror each other throughout as opposites, often with the same characters, sometimes moments later. Radovan and Frank could be laughing about going into the restaurant business one minute, and a few scenes later have knives and guns drawn on one another. Frank and Tonny are best mates in the film, but that doesn’t keep Frank from connecting that baseball bat to his skull without a second’s hesitation the moment he felt betrayed. Every hot and cold moment between Frank and Vic is a microcosm of this element of Pusher. That’s a reflection of the dehumanizing chaos that drug addicts and dealers live with every day. Pusher takes place over just seven days in the life of Frank, the addicts, and the players around him. Imagine living an entire existence like that.

What makes Pusher work really well overall is that breakneck energy that doesn’t let up until the credits finally roll. The stakes just keep getting higher for Frank and the outlook grimmer. One thing piles on to another in an unstable environment and it’s no wonder that the film explodes in a symphony of jaw-dropping violence and mayhem. From the first reel, it’s obvious that these characters are doomed. That’s usually how this sort of thing goes. Dance with the devil too many times and eventually you’re going to burst into flames. Frank and Tonny walk around Copenhagen at the beginning of Pusher like they own the damn city as they feed off of others unhappiness and pain. Without Tonny to balance Frank’s anger out after their altercation, Frank quickly begins to unravel, making fatal decisions over and over again until finally the plastic is rolled out under him…literally.