With five films sequentially utilizing the A Nightmare on Elm Street title, a sixth titled Freddy’s Dead: The Final Nightmare (1991), followed by Wes Craven’s A New Nightmare, then Jason vs. Freddy (2003)—not to mention the televised Freddy’s Nightmares—I suppose Parts 5 (The Dream Child) & 6 form a middle chapter, or close enough. The Never Sleep Again documentary released on DVD in 2010 is available on Shudder. With a 4-hour runtime, I am glad I have the DVDs for the chapter cuts. I am going to lean on a few of the details from the documentary for exploration along with my own impressions and familiarity.

The Nightmare on Elm Street films reflect their times as a kind of barometer on the temperature of the United States, especially for teens. Following trends in babysitting to Dungeons and Dragons, addiction, and metal band soundtracks, one can track the popular 80s fads through the films. Just follow the deaths: one of the victims challenges Freddy in D’n’D fantasy play, in another by comic book, and a later through Nintendo. By the time New Line Cinema needed to break out Freddy again, in 1989, the teen audiences of the original film were becoming adults.

The writers and producers were acutely aware that they needed to retain those audiences (and their dollars) as well as acquiring new ones. It made reasonable sense that a horrific hook for this audience might be that of parenthood. The topic of abortion was still a major hotbed, of which we’ve all been reminded in recent times. I think the horror fiction genre of splatterpunk and its influences on the writers is a good place to start examining the films, effects, and stylization. 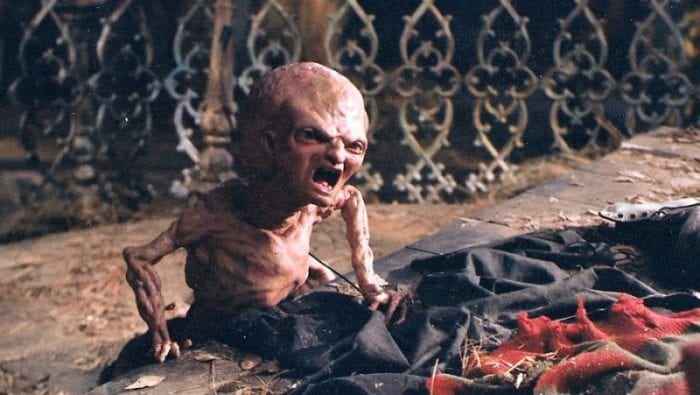 Nightmare on Elm Street 5: Dream Child was released in August of 1989, Part 4: The Dream Master in 1988, and Part 3: The Dream Warriors appeared in 1987. These films, overlapping in production for three consecutive years, reveal a quick passing of the baton from Nancy to Alice Johnson. The films’ writers’ influences for those specific years might have a more telling common thread. According to Grady Hendrix in his seminal work Paperbacks from Hell: The Twisted History of 70s and 80s Horror Fiction, “In 1986, war was declared. War on metal!”[1]

Therein was not only a signpost of Reaganomics and rhetoric but the more and more commonly cited era of ‘Satanic Panic.’ This was the panic created through media and churches around the world in reaction to social change and pressures in the 1970s and 80s that largely targeted heavy metal, fantasy, and horror arts as gateways into Satan worship and demonic possession. So, the bands simply amplified those themes, accepting the role and becoming more obnoxious about it. This was a trend that bled into the horror fiction of the time as well, creating essentially rock ‘n’ roll horror—splatterpunk.

When televangelists denounced horror movies, books, and games as causing cannibalism, murder, suicide, depression, and domestic violence, horror writers and metal bands doubled down, fire-hosing (sic) ever-more-offensive content into the faces of conservatives…Fangoria columnist David Schow coined the term splatterpunk, named for a new school of fiction oozing out of the crypt.[2]

We know from the Never Sleep Again documentary that New Line Cinema reached out to many of the splatterpunk authors of the time to seek pitches for Part 5. David Schow brought an original mock-up named Freddy Rules, which included an element known as the “coma pit,” the only place Freddy fears, but Michael De Luca, a developer at New Line Cinema at the time, was a large fan of Skipp and Craig’s novel The Light at the End (1986) and eventually chose their particular treatment.

New mother, executive producer Sara Risher, brought in the themes of abortion and motherhood. There was one snag, and it was that the developers at New Line Cinema felt Skipp and Craig’s final treatment was too Kubrickian for their audience. This brought in writer Leslie Bohem (Dante’s Peak), who had pitched a Freddy ‘baby’ for Part 3. The time was finally right for his concept with The Dream Child. An unapproved script in hand and deadlines looming, the final addition to the project was director Stephen Hopkins (Predator 2, Blown Away). Throw in the cross-promotional, MTV opportunities of a soundtrack boasting metal bands like W.A.S.P. (that stands for We Are Satan’s People, right?), and the splatterpunk attitude of the film was complete. But Risher’s new motherhood along with the aging fans and a logical next step for character Alice (Lisa Wilcox) created a perfect storm for the inclusion of the Dream Child. The script was unfinished when shooting began, which added to the stress of the director, whose critically appreciated style, according to British Film Institute writer Kim Newman, was ultimately undermined.

[…] But this over-drive style is constantly undercut by the screenplay … just about the only new angle this movie comes up with, apart from the intermittent pro-life propaganda discussions about teenage pregnancy, is the attempt to underline Wes Craven’s original thesis that it’s all the parents’ fault for killing Freddy in the first place by outfitting the teens with a succession of feckless, drunken and grotesque fathers and mothers.[3]

And while that is a fair assessment, The Dream Child is still an appreciated, if clunky, addition to the series as it and Freddy’s Dead attempt to develop the mythology of Freddy Krueger. If Freddy’s children must suffer because of their parents, he must be judged by his own parentage. In Part 5, we are re-introduced to Amanda Krueger, a nun raped by 100 maniacs in an asylum, adding visual for audiences of Freddy’s legacy as the “bastard son of 100 maniacs.” Inspired by the art of H.G. Giger, perhaps one of the most splatterpunk deaths in the series is the death of Danny (Dan Huston), the father of Alice’s son. 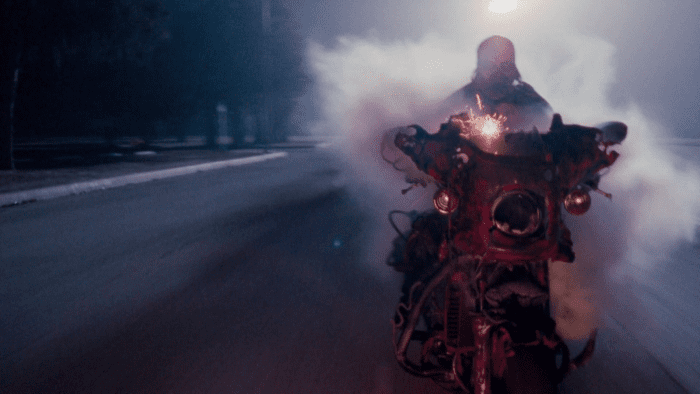 This is the famous motorcycle scene, wherein the bike melds its wires and tubes into Danny’s body before wrecking into a fiery end. Some might boast of Mark’s death in a comic book world by a “Super Freddy,” but more than that effect, Part 5 offers us an African-American side character who does not die in this horror film. An unfortunate trope in 80s horror films was for black actors to die first as is well-cited in Dr. Robin Means Coleman’s book Horror Noire in the sixth chapter titled “We always die first—Invisibility, Racial Red-lining, and Self-Sacrifice.” In Dream Child, Yvonne manages to survive a high-dive stop-motion attack and come back to Alice as a believer… in Freddy. 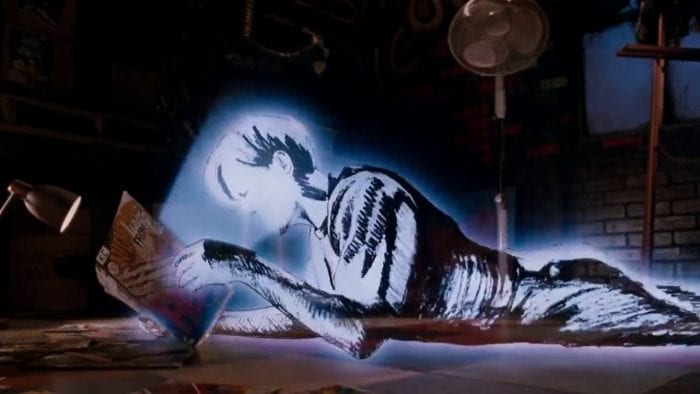 Then, there is Freddy’s Dead, the sixth and “final” installment of the original run of films until Freddy returned in Freddy Vs. Jason. By this writer’s opinion—I suspect others’ as well—it is the most abysmal of the series. All of these horror films have to answer the question of aging—have they aged well? Halloween (1978) seems to have done well. Friday the 13th (1980), while also displaying some teen trends, is straightforward without having leaned as heavily on the trends that handicap Nightmare on Elm Street. Cameos by Alice Cooper, Rosanne and Tom Arnold, while making sense at the time, are somewhat of an unfortunate timestamp and add little to the film. 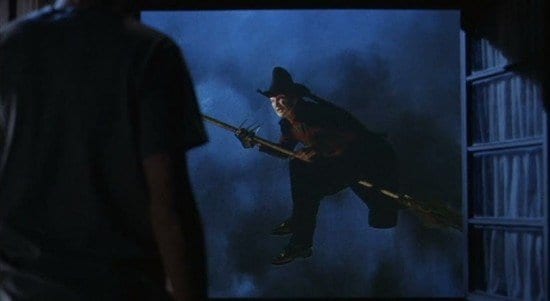 It makes one wonder how Peter Jackson (Lord of the Rings, Dead-Alive)’s original concept was rejected at all. In his script, The Dream Lover, Freddy is weak; the children have forgotten him, have quit fearing him. Further, kids go to sleep for the expressed purpose of bullying the now decrepit monster until one day he can kill one of them, gaining in power. One of the main characters would enter a coma and be stuck in Freddy’s world. As stated earlier, the trends continue in this film with a Nintendo death, but the deaths are few, and even the attempt at 3D innovation toward the end fail to honor the original spirit of the series. Part 6 plays a caricature of Freddy and his victims, a soulless comedy of forced effects. While Part 5 was a success, it was not a blockbuster and perhaps not the best of the series; with Part 6, Freddy feels dead before the opening credits. Speaking of credits, as for Freddy and his video game power glove, it was game over until creators might dream a new, more innovative nightmare.