You know those quirky little films that come along from time to time? They don’t do particularly well commercially, but somehow you get the feeling they were never really supposed to. Despite having a cast list of character actors as long as your arm, they fade into obscurity fairly quickly. That’s what Princess Caraboo was like. I remember seeing commercials for it back in 1994, but then I blinked and the ad campaign seemed to be over. I hunted it down and saw it anyway. It and I have had a quiet little love affair ever since. 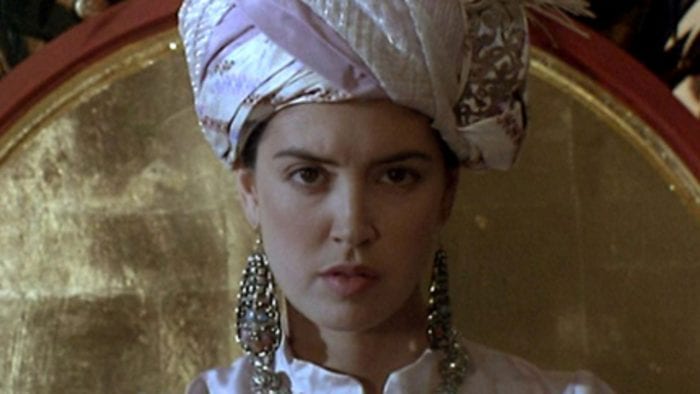 It is based on the true story of the so-called Princess Caraboo (Phoebe Cates), who appeared one day in 1817 on the streets of Bristol. Dressed in exotic clothes and speaking an unknown tongue, she communicates through pantomime and the odd recognizable foreign word. She claims that she is from the island nation of Javasu. Her father is a king, she says. She is in England as a result of her ship having been set upon by pirates, and her jumping overboard and into the Bristol Channel. Phoebe Cates is, of course, gorgeous. And thanks to her maternal grandmother’s Asian heritage, she is ethnically ambiguous enough that the audience, like everyone else, believes she could possibly be telling the truth.

She is taken in by Mrs. Worrall (Wendy Hughes), a local noblewoman with relatively low social standing and a kind heart. Mrs. Worrall comes to love the princess like a daughter. Over the next few weeks, the Worrall household acquires the Javasu national flag (they had one made, following the princess’s design), and a new wardrobe for the princess. Mr. Worrall (Jim Broadbent) has a less altruistic view of his houseguest. He comes to appreciate what the princess can do for his wallet and his popularity. A spice trade with an island nation could prove lucrative indeed. 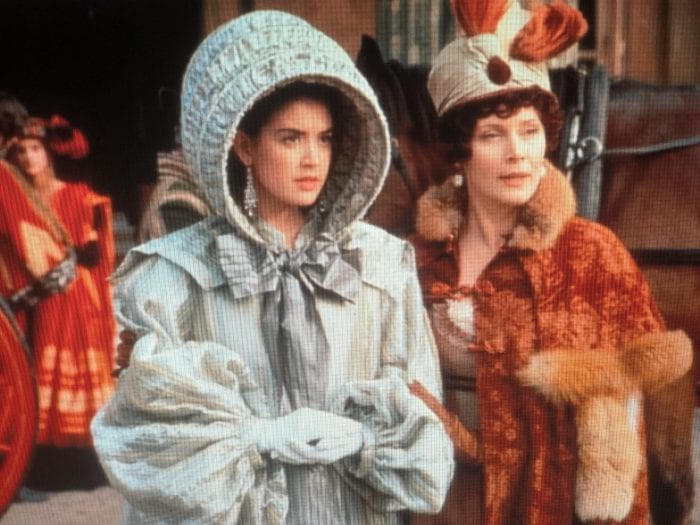 Everyone is curious about the princess and fascinated by both her story and her beauty.  Most curious is John Mathew Gutch (Stephen Rea), a lonely journalist. He sets out to prove the princess to be a fraud. Over the course of his investigation, however, he falls in love with her. He’s not the only one. Everyone who comes with the intent to debunk the princess instead becomes her ally. The fascination with the foreign princess grows, until she attracts the attention of the Prince Regent (John Sessions) himself.

This is one of those movies in which everyone is adorable. Even actors you’d never expect to be cute get to flex their huggable muscles in this. Stephen Rea was essentially introduced to US audiences two years earlier with The Crying Game. In that, he is as badass as you please. He’s asking bad guys if they’ve ever picked their teeth up with broken fingers and blowing things up with the Irish Republican Army. Here, he is practically a Beanie Baby. And John Lithgow plays a scholar from a local university, come to prove the princess to be a fraud. Not only does he come away believing she is the real thing, but his sudden crush on the princess moves him to literal tears.

Whenever I rewatch this movie, I have to wonder if some of the casting would be problematic now. For all that he was amazing, I still can never figure out what inspired Rob Reiner to cast Mandy Patinkin as a Spaniard in The Princess Bride. The same thing applies to Kevin Kline in this. He was and is married to Phoebe Cates, so his casting does make sense in that way. He plays the Worrall’s Greek butler, Mister Frixos. While he is decidedly not Greek, he is still Kevin Kline, and he is always delightful. 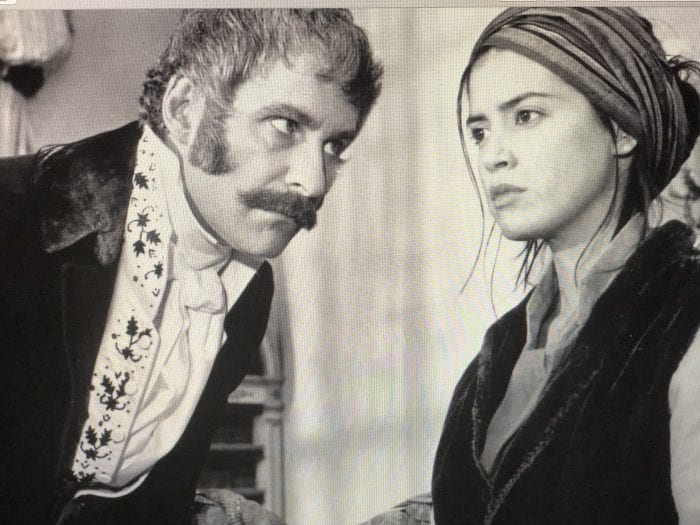 Upon the first arrival of the princess, Frixos and the other house staff suspect her of being a fraud. They are not particularly kind in their quest for proof since they don’t appreciate the thought of another commoner lording it over them. What finally convinces Frixos that the princess is genuine is her solution to a scuffle, initiated by the servants. She bites Frixos on the arm. “This is not the bite of a civilized woman.”

As Mr. Gutch continues to investigate the princess, he becomes aware of his feelings for her. He decides that, fraud or not, he will abandon the endeavor, for her own good. Unfortunately, his poking around piques the interest of a woman who had hosted a young woman through a charity. This girl, she says, told her daughter fantastic stories of a foreign princess, using a language she made up. When the woman comes to the Worrall home and greets the princess as Mary Baker, the princess’s house of cards tumbles around her. A tear slides down her cheek, as she says to Mrs. Worrall, “very sorry, mum”.

Did I mention that in those days, fraud was an offense punishable by hanging? As Mary awaits her fate in a prison shed. Mr. Gutch comes to visit her. She expresses remorse…sort of. “I’m sorry about Mrs. Worrall because she was deceived because she was kind. But Mr. Worrall and them others…I don’t mind so much about them.” At Mr. Gutch’s request, she tells him Princess Caraboo’s full story, including her origin.

Just another down-and-out girl on the street, Mary Baker discovered that folk were more likely to be kind to a foreigner than one of their own. Being the princess became her method of begging (another hanging offense), and grew from there. “When I was her…I was her. I become someone else, and I’m not Mary Baker no more.” As she tells her story, Mr. Gutch becomes more and more ensorcelled. If you didn’t already want to hug Stephen Rea in his lovableness, trust me, this will push you over the edge. 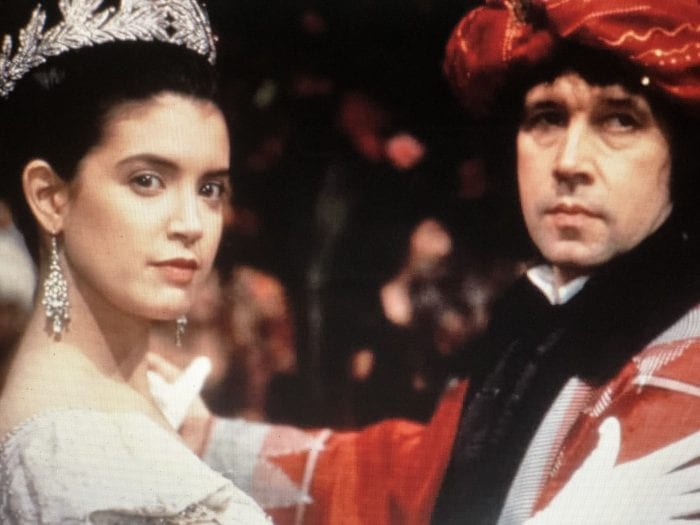 Between Mr. Gutch and Mrs. Worrall, a plan is concocted to save Mary’s life. A ship leaves the next morning for the New World, and she’s to be on it. In the process, Mrs. Worrall has an epiphany about her weak and selfish husband. When he casually remarks that Mary deserves to be hanged and they shouldn’t think any more about it, his wife fixes him with a steely glare. “Mister Worrall, up until this moment, I had not realized the true nature of your character.” She gives him the boot, keeping the house and the servants (she’s the one with the money), and leaving him the one maid with whom he had been philandering all along — no big loss.

The princess has touched the hearts of the other servants as well. Once scheming to expose her, they now drink the health of the princess. Over Mr. Worrall’s best claret, Mr. Frixos leads a toast. “She her own princess.” At her departure, Mr. Frixos helps her onto a horse to leave for the harbor. Their farewell is brief and sweet. Yes, it always yanks me out of the illusion of the film for a second to remind me that these two are married in real life. No, I don’t care.

Mary Baker sailing off into the sunrise could be enough of a happy ending on its own. But no, more cuteness awaits. As she and Mr. Gutch say an awkward goodbye (awkward because he is too shy to declare himself), she says, “perhaps you might find your way to America one day.” And he chokes and lets her leave. He is prepared to go back to his humdrum life when something in him wakes up.

We cut back to Mary, looking melancholy and alone on the deck of her ship when suddenly another boat pulls up alongside. It’s Mr. Gutch, come after her. He greets her with strange words. “What language is that?” she asks. “It’s Irish,” says he. “It means ‘there you are—here I am.’” She throws her arms around him, and get this—they don’t even kiss. That’s how cute this movie is. There is joy, hugging, and a sweetheart shot of their faces, beaming at each other. 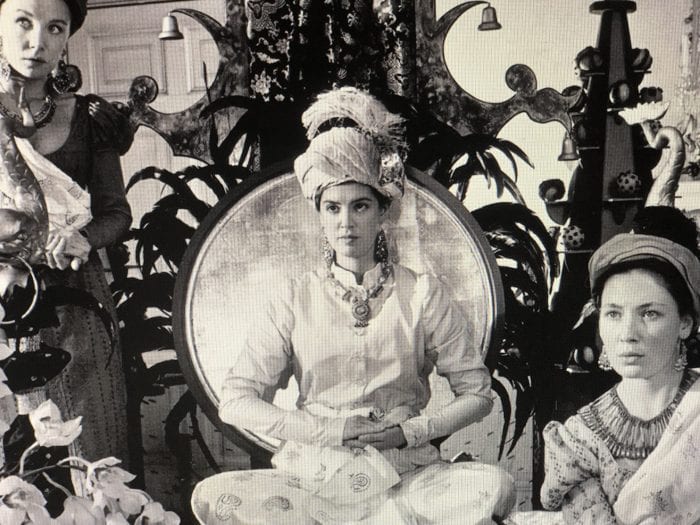 One last scene before the credits roll. Mr. Frixos is bringing Mrs. Worrall the evening paper, which holds a story particular to their interests. Apparently, the ship carrying Mary and Mr. Gutch had adventures en route to the New World. Suddenly, word is coming back to England that Princess Caraboo had been received at the court of Emperor Napoleon. That particular story is unverified, but the rest can be read in John Mathew Gutch’s written account of the thing. Over the end credits, Mr. Frixos’s voice is heard. “Is a very good story. Is it true, do you think?”

Is this movie going to change anyone’s life? No. It was Phoebe Cates’s last major role before going into semi-retirement from acting, and a fitting swan song for her. And while the story and performances are excellent, I doubt this film would end up on anyone’s Top Ten list. But if you’ve got a couple of hours to kill, and want something that is going to make your brain happy, I definitely recommend it. It is lovely and sweet (and did I mention adorable?). And really, the thought of a poor girl who ingratiated herself into the upper class using only her wits has to be inspiring to someone. Princess Caraboo’s real-life story has been the source material for at least two musical versions. This movie doesn’t work too hard, and nor should you. Just slide into it like a warm bath, and let it make you happy.