We don’t know much about the Breaking Bad movie at the moment. We know that it’s happening, sure, and we know that it will be based around Jesse Pinkman (Aaron Paul) and his story following the finale, but when it comes to the details, we are left desperately hunting for clues.

Bryan Cranston confirmed the fact that the movie was in the works back in November 2018, and following that it was officially confirmed in February when filming commenced. Everything surrounding the film has been driving fans like us crazy, because it’s all so secretive. It’s so secretive that currently Aaron Paul returning as Jesse Pinkman is the only cast member currently confirmed publicly to star in the movie.

This week, on June 25th 2019, both Aaron Paul and Bryan Cranston took to Twitter at the exact same time to tweet a picture of two mules, a picture that they captioned ‘Soon’. This incredibly vague tweet honestly leaves us with more questions than we had before. Is this even related to the Breaking Bad movie? Could the movie actually be coming up within this year? Could it potentially be about the pair making an appearance in the upcoming season of Better Call Saul? Or perhaps something completely different is in the making?

My thoughts at the moment are that I think a teaser trailer, or (if we’re lucky) maybe even a full trailer will be coming ‘soon’ for the sequel, and based on the fact that both actors have tweeted this image together, it only raises my hopes that Walter White will somehow make an appearance in this film.

Of course, when we look back at the Breaking Bad finale, Walter White appears to be very much dead and gone. But Bryan Cranston has made his excitement about the new project very clear, and he wants to be involved in any way that he can.

When Bryan appeared on the Dan Patrick show back in November, he said “I don’t know if there’s an appearance — flashbacks, flash forwards — but I’m excited about it because it’s Breaking Bad and it was the greatest professional period of my life and I can’t wait to see all those people again, even if I just come by to visit,”

I’m sure he won’t just be coming by to visit. I can’t imagine a Breaking Bad movie without Bryan Cranston. While I have every faith in Vince Gilligan to create a film that lives up to the beauty of the Breaking Bad series, i’d have a hard time seeing it happen without the inclusion of the main character. Of course, Walter’s only option for an appearence is through a flashback (or flash forward, as Bryan suggested) but i’ll take that over nothing. 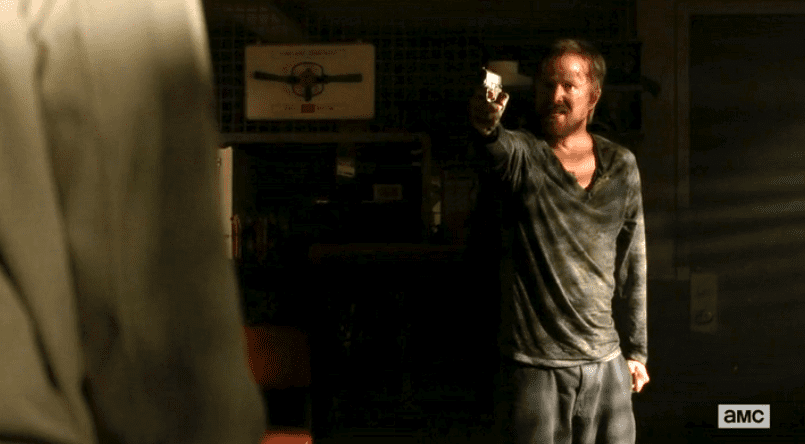 On the Jesse Pinkman side of things, the last time we saw him, he gave Walter a look that my heart actually felt. It was a look of someone who knows they’re never going to see this person again, and it was a heartbreaking look. Afterwards, he got in his car, and sped away, laughing from what seemed to be a strong sense of relief. When the movie hits, we’re either going to be faced with quite a large time gap, and see where Jesse is in his life years on, or the writers will completely surprise me and continue the story on from that exact moment. It’s likely to be the first option, i’d say.

Whatever story line the movie ends up following, I know one thing for sure and that is that I can’t wait for it. Breaking Bad left the story of Jesse Pinkman so open that there almost needed to be a movie to give us any sense of closure, and right now i’ll take whatever I can get.