I worried about how the second season of Legion ended, as David took a heel turn into becoming a villain and the team at Division seemed to side with Amahl Farouk against him.

I still have those worries, but the first episode of Season 3 largely assuaged them insofar as they included a concern about the show remaining good.

It’s not clear where we are going when it comes to David’s arc—whether the show might in some way ask us to forgive him or not—or whether we are going to be asked to fully accept the idea of Farouk on the side of the good.

What is clear, instead, is that this will never be clear; it will remain ambiguous, and as viewers we will have our competing views and interpretations of what occurs. We’ll feel different ways about it. And this leads me to think that all of the stuff in Season 2 about how a delusion starts as an egg and so on—along with the bit about the nocebo effect and what happened to cheerleaders in Le Roy—might relate more to something about how we as viewers experience the show than to something in the narrative.

This was already there, of course, in the way—arguably a bit too on the nose—that Jon Hamm’s narrator would introduce “previously on” segments by saying things such as “apparently on” and “ostensibly on” Legion…The question is not whether the events depicted really happened within the narrative of the show, so much as it how we have interpreted them.

For example, the end of Season 2 left me with the certain idea that David had become irredeemable because of what he did to Syd. He wiped her mind and proceeded to have sex with her. Concerns about whether he would end the world then became oddly secondary. This relationship had run though the series and defined its heart, and here he has betrayed it. He raped her.

Or, was it perhaps, as I have seen others posit, that he removed delusions that had been placed in her mind by Farouk? Maybe the Shadow King has worked nefariously to ensure his own survival by turning David’s friends against him? I don’t think so, but I can’t fully rule it out.

And, if nothing else, we have David’s own perception of events, which we might relate to in varying ways. He thinks Syd is confused. Whether by influence of Farouk or other means, he has come to believe at the end of Season 2 that he is fixing her mind rather than tricking her, and giving them a chance to reconnect and move forward.

To my mind, this plays as the worst kind of gaslighting and manipulation. He doesn’t convince her as a self-conscious and autonomous individual that she’d got it wrong; he overrides those thoughts he feels certain are erroneous. And yet, could he have been right about that? I’m sure there are those out there who think he was.

Rather than resolving any of this in the least, however, Season 3 of Legion shifts the game entirely. It’s not clear how much time has passed, but clearly some has, as David is now the head of a cult and calling himself the Magic Man. He’ll take away your troubles; just please stick around to keep him company and help with the housework.

It’s a brilliant move on Legion‘s part, and the show is as audacious as ever as it spends about a third of the episode (more than 15 minutes) before it gives us a character we have ever seen before.

Instead, we get the adventures of Jia-Yi (Lauren Tsai) as she listens to tapes about time travel, has a weird breakfast where she talks to a guy who is presumably her dad on an old-school TV, and finds a flyer that leads her in the direction of David and his crew. We learn that she can indeed time travel as the episode progresses, and she decides to help David. Why? Well, the only explanation we get is when Farouk confronts her in the astral plane:

You might take this literally, but I don’t. Are there robots in the universe of Legion? Sure. We even saw Cary make a robot Ptonomy/mainframe in this episode. But I still think this is figurative. She’s told David by this point how her father collects robots and she would go into the room full of them and pretend to be one. I take it this is symbolic of her rejection of that.

The robot is not merely an artificial intelligence; that’s not what the term means. It is more an updated version of the old term “automaton”—one who does not think for themselves but is rather controlled by others.

Is Farouk a robot in this sense? I don’t know. Perhaps he is the one who is doing the controlling. It remains questionable that the Division team would take him on board as seamlessly as they have seemed to, given all that he has done and who he is. But if he is not in control, then Switch has a point: he’s being used by the forces at Division to their own ends just so that he can survive, and if that is what is happening then he is their robot indeed.

As he turned from being portrayed as the Devil with Yellow Eyes, The Angriest Boy in the World, and some version of Lenny, to Amahl Farouk (Navid Negahben), the Shadow King has been (literally) humanized. But it would be a mistake to forget the monster that he has been. 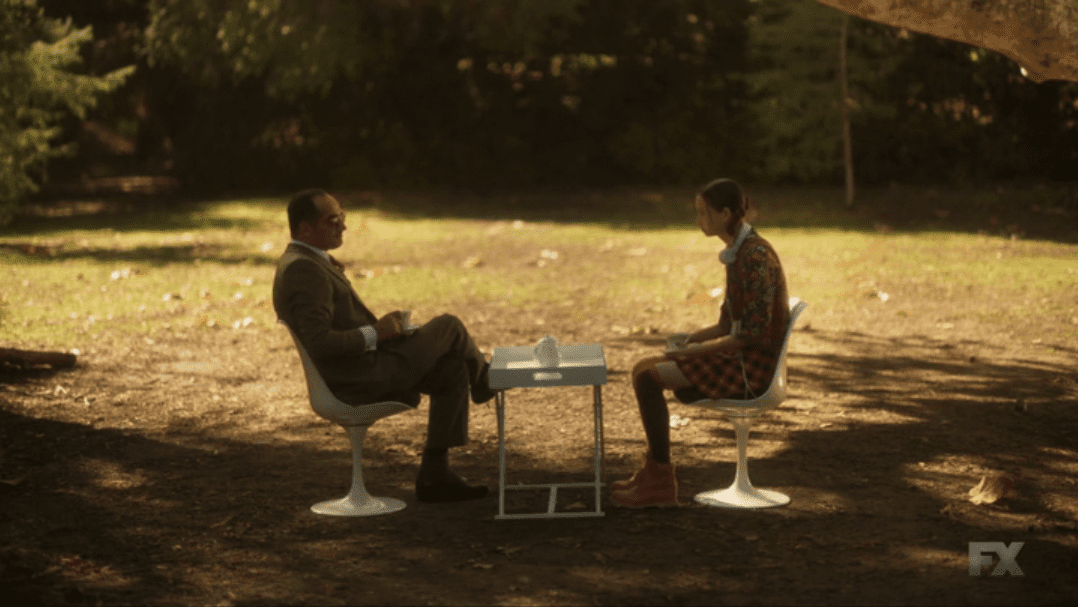 On the other hand, there is David. As I have already said, his betrayal of Syd bothered me more than anything at the end of Season 2, including the idea that he was a threat to end the world.

But what about that?

This is what motivated Syd (in part through the suggestions of future-Syd, who I guess no longer exists?) to the thought that Farouk needed to be spared. If the timeline where David killed him led to the end of the world (whatever that means beyond Syd pretty much losing an arm), then one where Farouk lives needs to be tried.

No argument there, if we accept the dimensional logic.

But is David still a threat to the world after the Division team spares Farouk and betrays him at the end of Season 2? This gets trickier.

Let’s suppose that it is true that the timeline wherein David kills Farouk somehow leads to him destroying the world. We still do not know how that occurs, and neither does Syd or anyone else at Division.

Saving Farouk might have stopped it, but the team seems to presume that David remains a threat, and this is unclear.

If in the “original” timeline David killed Farouk and then ended up destroying the world (somehow), it seems reasonable to presume that he also would have stayed with Division until whatever happened that led to this. (I am not convinced this timeline ever existed.)

If now, he has broken with Division, and Farouk is alive, is this itself perhaps not enough to change the course of future events? Division continues to act as though he is going to end the world and needs to be stopped, but the logic of this is at very least questionable. A flap of a butterfly’s wings in Brazil might set off a tornado in Texas, after all.

David doesn’t seem to be a threat; he’s gone all hippie on things. If we take it from his perspective, after what happened with Syd he seems to have set out to try and make the world a better place; even if his vision of that is a kind of free-love commune-type thing where he takes everyone’s pain away by controlling their minds.

– I tried that. It’s better to read people’s minds.

It is true that we see him arguing with another version of himself, and that this David might cause problems, but the idea that he remains an existential threat seems under-motivated if you think about it. And Farouk’s suggestion that Syd wants to kill him out of revenge (as she does in two different versions of events in this episode) as opposed to a well-grounded sense of what is the right thing to do, is potentially on the money.

Of course, then there is the fact that David also kills Kerry in both of those timelines without blinking an eye…

The most fascinating character in this episode, though, is Switch.

She is where we start, after a “Please Stand By” message that turns into “Bedtime is Here”—another indication of how Legion is putting us in the story by first interrupting our expectations and then suggesting this might all be a dream.

She listens to tapes about time travel and how to do it, which include some interesting lines:

Time is not a river. It is a jungle filled with monsters.

There is also something later about how going too far back might awaken the Demon.

She goes out into the world and finds a couple of flyers, which relate to a number of things we already knew, and some we didn’t:

Apparently David has set himself up as representing the forces of Multiplication in opposition to Division, which is cute, but may be something more: to be legion is to be a multiplicity, after all.

And then there is Jia-Yi’s search for him, from the flyer, to 89.1 on the radio dial and the yellow bus that isn’t yellow but has the words “Yellow Bus” written on the back of it.

There is her search for the pregnant virgin, and the question of the meaning of “Orange Fish,” which culminates in her realizing that the name to pronounce is “Salmon” and a striking musical number.

But Farouk’s question looms large, nonetheless: why is she helping David?

“Time Traveler!!! A Are You?” might make me think of Nintendo’s Pro Wrestling and “A Winner is You!” fondly, but it doesn’t really motivate the character’s actions.

But why does she help David? Is it that he is a man, while Farouk and the others are robots? Is it as simple as what she says?

And what does it mean to be a robot, anyway, if we’re going to lump Syd, Cary/Kerry, and the rest in there as well? Are they all mindlessly following…something? Are they trapped in some kind of delusion? Or are they right that David is the threat?

And what about Switch? She sides with David so seamlessly, and follows the flyers so well, that it would be easy to miss that she seems to have forgotten something:

Beware those that would tell you your name. And yet, when she shows up to David’s place and tells Squirrel her name is Jia-Yi, he responds by saying that isn’t it and calls her Switch.

– I tried that. It’s better to read people’s minds.