Here at 25YLSite, we handle a lot of heavy lifting. Analysis, interpretation, deep discussion, introspective interviews…you name it, we’ve got it. “Favorites” takes a lighter approach to the material we normally cover. Each week, we will take you through a list of favorites—whether it’s moments, scenes, episodes, characters, lines of dialogue, whatever!—in bite-sized articles perfect for your lunch break, a dull commute, or anywhere you need to take a Moment of Zen. So, sit back and enjoy this week’s offering: Brien Allen’s top five calm creative cartoons for kids.

I grew up in the height of the Saturday morning cartoons era, when they were such a big deal that there was a special show on during prime time Friday night, just to introduce the new season that was going to premiere the next day. Cartoons were huge, at least as far as I knew. Spiderman and Speed Racer in syndication weekday mornings; Bugs Bunny and Tom & Jerry in syndication weekday afternoons; various holiday specials annually. We thought life was pretty good.

As a parent though, you find that you have a totally different perspective on cartoons than you did when you were growing up. For example, I look on the various Charlie Brown holiday specials now and frankly don’t want my kids watching them. Those kids are horrible to each other! I can’t believe how awful it is; I ruin my childhood every time I watch one. Modern cartoons on the other hand are, for the most part, either a hyperactive mess that gives me ADHD just watching them, or they contain adult themes and plot lines that are way beyond anything a young mind needs to be exposed to.

Yes, I know, just by admitting that I let my kids watch videos, I’m outing myself as a bad parent. Duly noted. Meanwhile, back to reality.

So, old cartoons are inappropriate, new cartoons are a hot mess. What do you do? Well, they’re not all bad. We are living in a renaissance of amazing television, and thankfully that extends to the world of children’s cartoons. In particular, there are a handful, maybe more than a handful even, that rise above the noise and stand out as a positive viewing experience, for the kids and their parents.

As the title says, my two criteria here are that the cartoon be calm and that it be creative. “Calm” because kids model everything they see and hear, especially what they see and hear on a screen. Even just having one annoying character in the cast can be an issue. While you and I might know that’s the one setting the bad example that they shouldn’t follow, that’s assuredly the one they will latch on to and mimic for a month solid—even after you delete the damn thing. “Creative” because, hopefully, the show can be a bit more than just mindless entertainment for them: a viewing experience that is more akin to play, and maybe even inspires their own creativity. 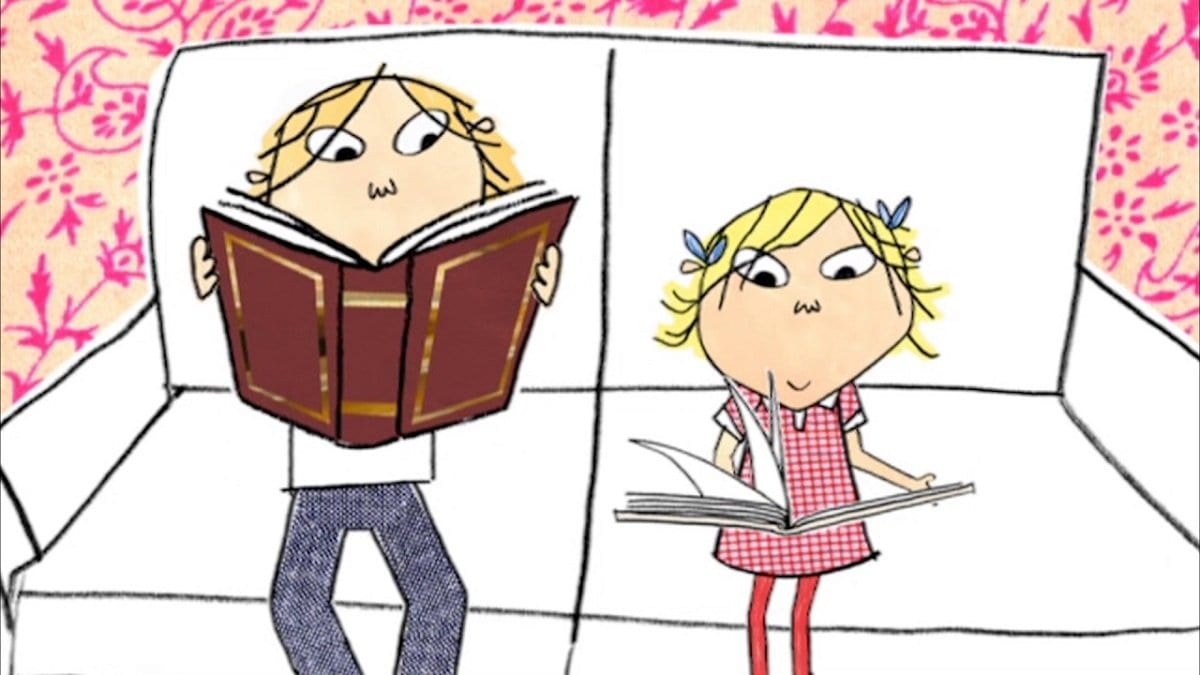 Our gateway drug into the world of Cbeebie cartoons (from the BBC) was Charlie and Lola. Every episode starts with Charlie saying, “I have this little sister Lola. She is small and very funny.” The cartoon is based on an award winning series of books by Lauren Child. Lola is highly energetic and imaginative. Charlie is the patient older brother who is always helping her with things. As siblings go, their relationship is amazingly positive. Like Charlie and Sally (Brown), you never see the adults on the show, but they do exist.

This series is relatively grounded in reality. Charlie and Lola go to school, they live in an apartment complex, and each have their respective best friends (Marv and Lotta). Lola also has an imaginary friend, Soren Lorenson, which they do a pretty amazing job of portraying in the show. Mostly each episode is just about some new thing that Lola is obsessing over or some situation she’s gotten herself into. The real fun though comes when we get to see inside Lola’s imagination. We constantly cut to her flights of fancy, picturing things like crocodiles snapping up from the cracks in sidewalks, her and Charlie putting on a circus act, or sliding down the snake in a snakes and ladders game. 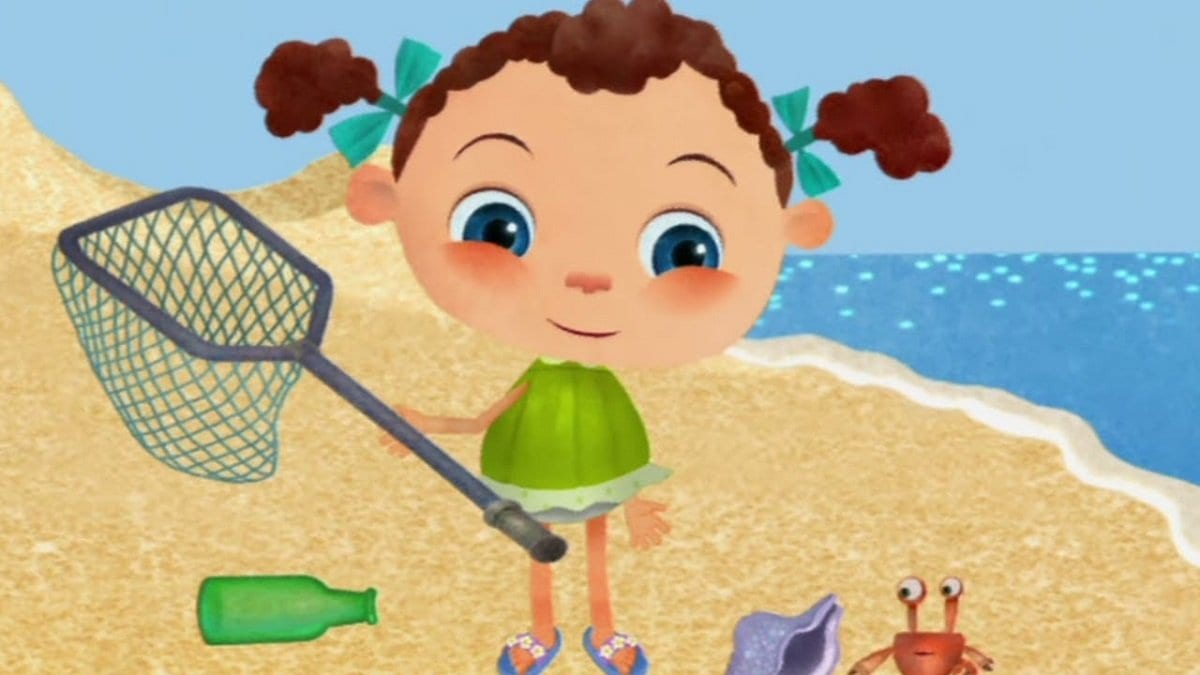 Franny is a little girl who works with her grandpa at his shoe repair shop in the big city. When a customer comes in and hands over a pair of shoes to be repaired, Franny takes them into the back to put them into the “fixit box”. Before she does though, she wonders aloud “Where will my feet take me today?” and tries them on.

OK, yeah, not the most hygienic premise.

When she does so, she is transported to a fantasy world based on the shoes, be they cowboy boots or snow shoes or ballerina slippers. There she meets someone who is having some sort of difficulty, and Franny helps them resolve it. This in turn teaches her a lesson applicable to something going on in the real world. It’s all a bit formulaic, but the characters are cute (usually talking animals) and the take-away messages are great. When she returns, she always finds some little souvenir of her adventure in the shoes–another treasure for her shoebox–leaving us to wonder if it really was a fantasy. Pretty deep for a cartoon about a little girl barely evading an impending foot fungus infection. 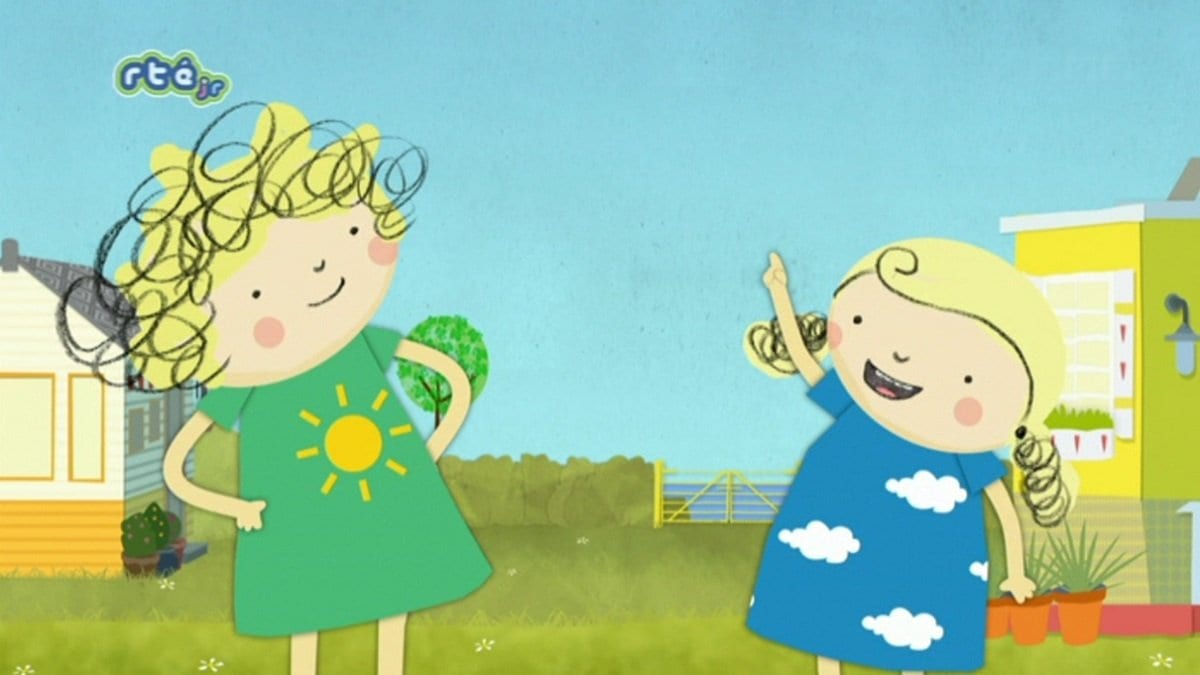 Here again, the show is named quite cleverly for the lead characters, Nelly and Nora, who are sisters living with their mom and dad in a trailer park by the sea (theoretically vacationing, though they are there year round). The two are both sisters and best friends, and there is also a lot of positive interaction with the adults, their parents and all the neighbors, in the close knit community.

Nelly and Nora spend a lot of their time exploring the park, beach, and nearby sheep farm. So there’s a strong focus on the outdoors and nature in the show. In one particularly charming episode, they listen to the “rain drop music” during a shower, and then collect the rain water to make their own music after the storm passes. This one just exudes charm and cuteness. 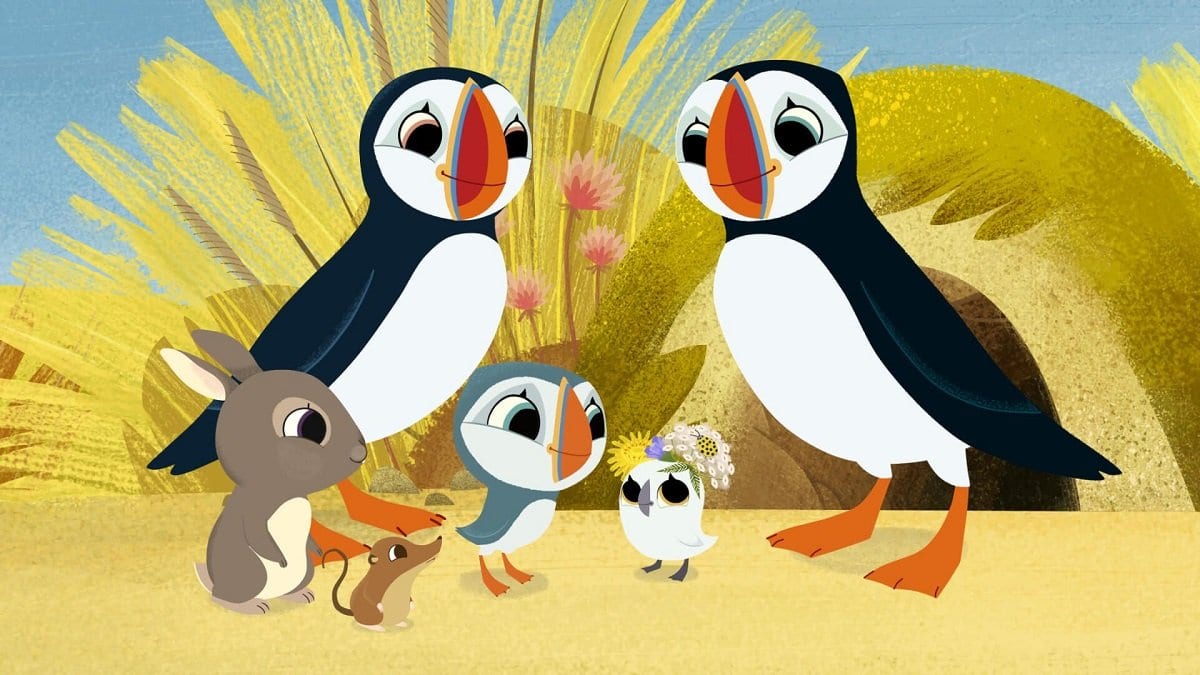 In keeping with the strong sibling theme here, Puffin Rock is about Oona and her little brother Baba. Except, of course, they are puffins. Puffins, if you didn’t know (as I did not), can fly and swim, which opens up a lot of possibilities for the show. They live on a small island with a remarkable variety of wildlife. Their friends include a pigmy shrew, a rabbit, a seal pup, a green owl, a hermit crab, and a fox. They also share the island with a bunch of seagulls, who “do not exactly get along with” the puffins in the words of the narrator.

Having a narrator seems to be a feature of a lot of the British cartoons I’ve listed here. In this case, we learn a little tidbits about the lives of all the animals on Puffin Rock through the narrator. He also helps cue the younger viewers as to what’s going on and why, without being too intrusive.

Sarah & Duck is by far my favorite. This show is just pure creativity without boundaries. Sarah is a 7 year old girl living with her best friend Duck, who is, yes, a duck. In this world, kids live in houses on their own like adults, although there are also adults in the world (with names like Scarf Lady, Cloud Captain, and Bread Man). Even normally inanimate objects have the potential to be live and active characters: an umbrella, a cake, a hand bag. Bugs have their own jazz bands. Moon, Mars and Venus often come down for a chat, as does the somewhat elusive Rainbow.

The show is really quite bonkers, and yet well-grounded in its own reality. It’s hard to explain, but it just works so well. In the first episode, Sarah gets some seeds in the newspaper, plants them in a little patch by the front door, and thus are born the Shallots, who become a permanent feature for the rest of the show. They put on a circus act in a later episode, and get lost at sea in another. That’s how it works in Sarah’s world.

Here again, there is a narrator, but this time he interacts directly with the characters. He converses with Sarah, often making suggestions that she follows, and calls Duck “old chap”. It’s even implied that he used to live in the house where Sarah lives.

While those are my top five, I’d be remiss if I didn’t point out a few more of our favorites that are worth checking out:

Those are Brien Allen’s favorites! What are yours? Let us know in the comments!