Long before Rian Johnson became a household name with Star Wars: The Last Jedi (2017) he made a splash with his first independent thriller Brick (2006). That film took noir tropes and beatnik style lingo, infusing them into a modern high school setting. The results were dizzyingly electric. Joseph Gordon-Levitt, who would pair up with Rian Johnson again on his sci-fi instant classic Looper (2012), stood out in Brick as a bright young talent in a film that put a fresh, unique spin on the mystery genre that seemed wholly unique.

Before diving headfirst into science fiction, Johnson helmed The Brothers Bloom (2008) with a star-studded cast that included Academy Award winner Adrian Brody (The Pianist) and Academy Award nominee Mark Ruffalo (Spotlight) as two brothers attempting to pull off the con of all cons. He’s also helmed some of the best episodes of AMC’s classic drug saga Breaking Bad, including “Ozymandias,” which is widely considered to be one of the best episodes of modern television.

This was all before Rian Johnson became the only person in the four decades (and counting) history of Star Wars other than creator George Lucas to have sole writing and directing credit on a film in that universe. Star Wars: Episode VIII: The Last Jedi (2017) proved to be a divisive film for a certain sect of audience members, but the vast majority agreed that Rian Johnson had provided the saga with a fresh new voice and tone that was more inclusive and forward thinking for a franchise that could sometimes feel stilted and formulaic.

One doesn’t come off a Star Wars project with the same level of success as a filmmaker that Rian Johnson has already seen in his career and not have his next project be one of the most buzzed about films in Hollywood since its inception. After must speculation and anticipation to see just what the wunderkind was going to satiate audiences with next, the trailer for the upcoming Knives Out debuted this week and sees Rian Johnson going back to “whodunnit” territory, albeit with an entirely different feel than previous efforts.

The first thing audiences will note about Knives Out before taking one look at the trailer is the star-studded ensemble cast Johnson has managed to assemble. This is said all the time, but literally everyone in Hollywood seems to have a role in Knives Out. Daniel Craig (Casino Royale, Skyfall) is taking a break from his busy schedule as the world’s most famous double agent (James Bond) to play an entirely different sort of detective that seems to come straight from the pages of an Agatha Christie murder mystery. In supporting roles are Michael Shannon (The Shape of Water), Jamie Lee Curtis (Halloween), Lakeith Stanfield (Sorry to Bother You), Chris Evans ( Captain America), and Christopher Plummer (All the Money in the World) as the unfortunate murdered patriarch.

The taste that the first trailer leaves for Knives Out is quite decadent and delicious. Every actor seems to be reveling in their parts as rich murder suspects who at least one murdered their father. Daniel Craig is a sort of Pirot type investigator with a Southern-sounding charm. In tweed jacket and a slight twang, he’s really eschewing the sexy swagger of 007 for something more aking to his performance in Steven Soderbergh’s Logan Lucky (2017). That film gave Craig to really step outside of the Bond role and play a hillbilly from West Virginia intent on robbing Nascar. That film unfortunately seemed to go by without much notice, but Rian Johnson was apparently paying attention. There’s also a Clue (1985) feeling to the Knives Out trailer that just hints at a beautifully dark comedy/murder mystery. 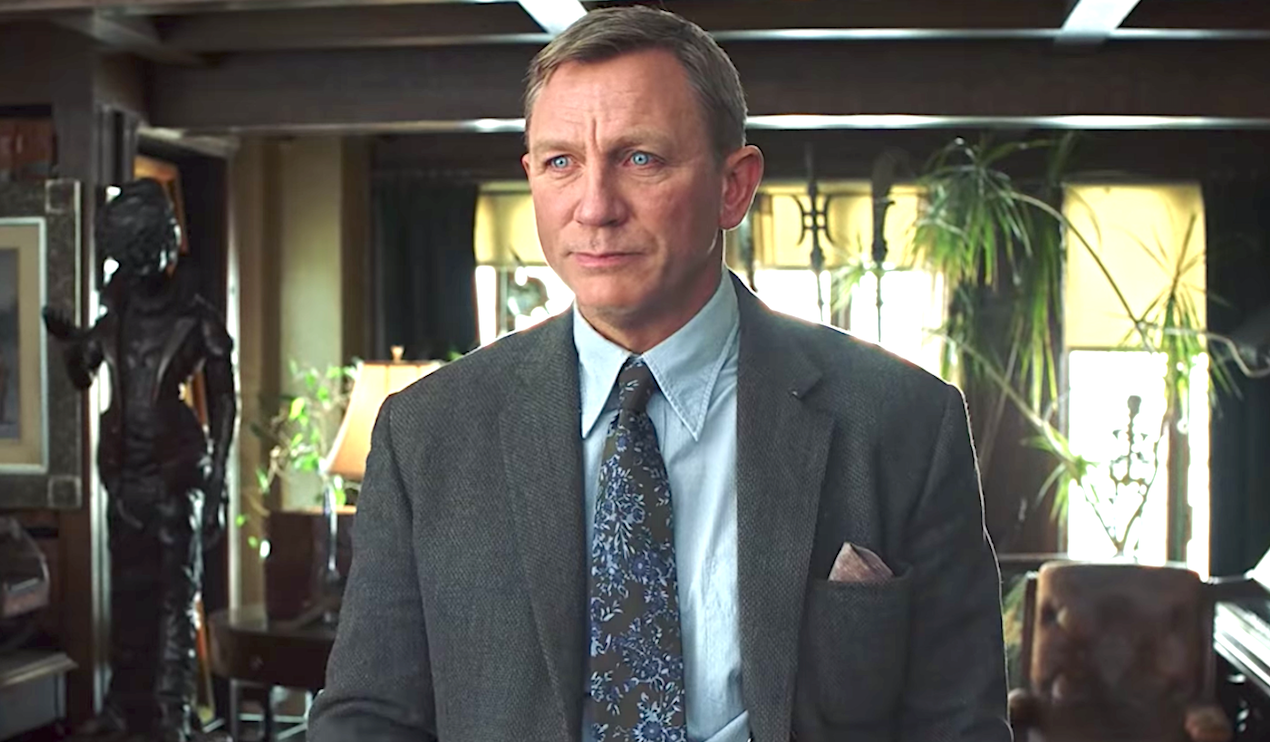 To give away more than the basic premise and feel of Knives Out in the first trailer would be a crime worse than cold-blooded murder to a cinephile, so to put it simply the film is about a detective (Daniel Craig) who is investigating the murder of a patriarch (Christopher Plummer) by one of his own family members at his 85th birthday party. There’s a classic element to that plot that just screams old Hollywood and should have audiences lining up around the block when the film sees it’s release this coming November. Just be sure to have your thinking caps on and your eyes peeled in front and behind when you head into the theater for Knives Out or the next murder-mystery party could always be your own.