While last week, Euphoria explored Nate’s complicated past, this week’s episode—“Made You Look”—focuses on Kat and her battle with self-image and confidence.

In another Rue-narrated segment to kick off the episode, we learn Kat has struggled with her weight since she was 11 years old, when she gained 20 pounds from drinking 72 virgin piña coladas during a vacation. Subsequently being dumped by her boyfriend and then mocked by her fellow students, Kat’s public self-confidence was shattered. Despite becoming an online fan fiction superstar, Kat was unable to transfer that popularity into her real life at high school.

But then Kat has a bit of a light-bulb moment and discovers how to redefine herself and transform her self-esteem.

After losing her virginity in the first episode of Euphoria, and learning the act was caught on video and posted to the internet, Kat finds an inner source of power from the popularity of the video. She decides to shoot her own videos and FaceTime with a stranger while bossing him around (in a graphic scene that showed way more than I needed to see). She buys new clothes and makeup. Latex and leather are now her armor out in the real world.

“You look different,” Kat’s biology partner, Ethan, tells her. Her reply: “I changed.”

For the most part, I enjoyed watching Kat’s transformation, but for me the side stories in Euphoria are still not hooking me. The previous week’s focus on Nate at least unveiled a connection to one of our main characters (Jules), but I’m not really clear yet on how Kat fits into Rue and Jules’ storylines. (At least I’m assuming they will become intertwined at some point.) Same goes for the Cassie and Chris portions, in which this week featured a rather underwhelming visit to Chris’ college fraternity.

I’m hoping these secondary stories are able to be effectively integrated into the main story, because I think the portions of Euphoria involving Rue and Jules (both when they’re together and separate) are a pleasure to watch.

In “Made You Look,” Rue is still struggling to stay clean. In the aftermath of the fentanyl fiasco from the previous episode, Jules tells Rue she doesn’t want to be around her if she continues to use. Jules’ reaction makes me wonder if the story behind her mother is somehow related to drug abuse. Promising to quit, Rue stays clean for two weeks but then can’t overcome the temptation of the pill bottles in Jules’ kitchen. Two weeks down the drain, just like that. 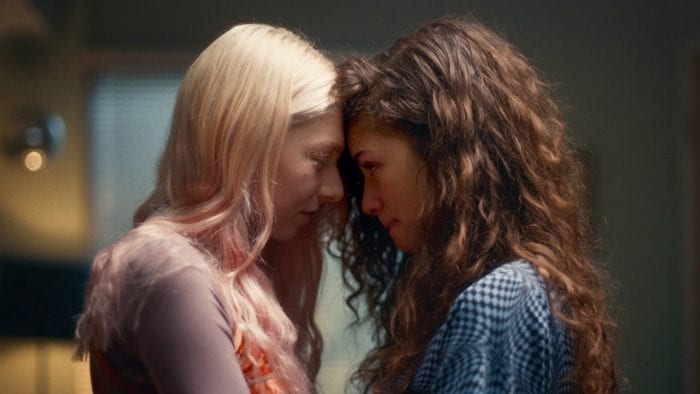 Shortly after, Rue attends an NA meeting and lies that has been clean for 60 days. A man named Ali (Colman Domingo) calls out her “very moving share.” He asks Rue to think about what it must have been like for her younger sister, Gia (Storm Reid), to find her after her overdose. How it could affect her for the rest of her life. How could she trust anyone, or love anyone? This is tough for Rue to process, and even though she spends some time with Gia after the meeting, Rue continues to use drugs throughout the episode.

The most powerful moment of this episode for me once again revolved around an interaction between Rue and Fezco. Rue tries to enter his place, but unlike last week, Fez stays strong and doesn’t let her enter. She repeatedly pounds on the door, swearing at him and screaming that he ruined her life for selling her drugs in the first place. This scene was very well done, and I’m loving the relationship between Fez and Rue. After what went down with Mouse and the fentanyl, it appears Fez is serious about protecting Rue the best he can—and that means not letting her near him for the time being. In a moment of hope at the end of the episode, Rue reaches out to Ali for help. Hopefully he can help her stay clean, at least eventually.

Meanwhile, Jules finds herself falling for “ShyGuy118″/”Tyler”/Nate as the two obsessively are messaging each other. In a creatively executed montage, the two are shown side by side in a split screen, mirroring each other’s actions. Showing this split really gives the impression of these two characters trying to find themselves. Given what we saw in Nate’s backstory, it’s plausible to think he is at the very least curious about transgender girls, but I’m not sure he even knows what he wants. Jules seems to have a better grasp on who she is, but I’m sure she has questions about herself as well.

I still wonder about Nate’s motives for messaging Jules on the app. He knows who she is, but she doesn’t know it’s him. He lies to her about his name, where he goes to school, and that he lives only with his mom. Nate seems to really be connecting with Jules—the montage showed him looking truly invested in what she’s telling him—but I have the sinking suspicion that this is all a bad setup.

The fact that he uses the fake name Tyler—the name of the guy who slept with Nate’s girlfriend and the guy who Nate beat the living crap out of last episode—leads me to believe he is up to something bad. But if that is the case, I don’t understand the reasoning behind why he would put in this level of effort. It has to be more than Jules waving a knife at him during the party in Episode 1. We likely will have a better idea of what exactly he is up to shortly, as the two have plans to meet after an upcoming carnival.

Jules and Nate’s online relationship is having an effect on others as well. Rue is developing romantic feelings for Jules—she even kisses her briefly before racing off to Fez’s place—and is jealous of all of the attention Nate is getting. She worries about Jules meeting him after the carnival, rather than in more of a public setting. Despite the jealous origins of these thoughts, Rue has a good point and ultimately wants her friend to be safe. 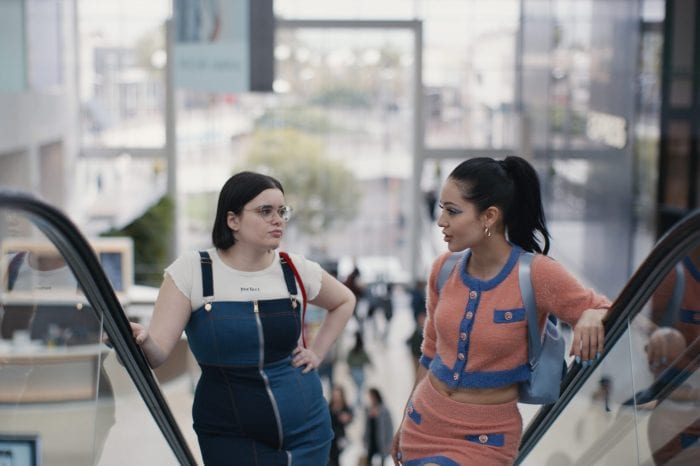 This material on Nate’s phone does bring up some questions. We know he sent one of the pictures to Jules, representing it as his own. So are the photos on his phone a part of whatever scheme he is pulling on Jules (if that’s what’s going on)? Or are they pornographic for Nate’s interest, similar to his father’s videos? I’m not really sure yet what these are supposed to mean.

Next week I think we’ll receive some of these answers, as I’m assuming we’ll get to the carnival meeting between Nate/Tyler and Jules. At the very least, I’m hoping Euphoria sticks with what’s working best. Show us more Rue and Jules.