What does millennial horror look like? Is it the found-footage scares of Paranormal Activity? Or nostalgic-laced pieces like IT and Stranger Things? Many associate the millennial horror film with technological advancements and social media, citing films and television shows like Black Mirror, Searching, and Unfriended as being the prime examples. Others look to Blumhouse’s producer -extraordinaire Jason Blum, and his slew of jump-scare horror megahits like The Purge, Insidious, and Happy Death Day, as the pinnacle of millennial filmmaking. But what really scares us as millennials?

When I ask myself this question, I find myself leaning away from the aforementioned titles and turning towards films that take our very specific psychological and social anxieties and craft them into something special on-screen. Films like Get Out, It Follows, The Babadook and The Witch come to mind immediately and are all films that have been heralded as “the next great horror masterpiece,” a moniker that seems to be thrown around so frequently that it has almost lost all meaning. However, there is one director who I believe has truly earned this high praise after creating not one but two of the best horror films of all time over the course of just a few short years. 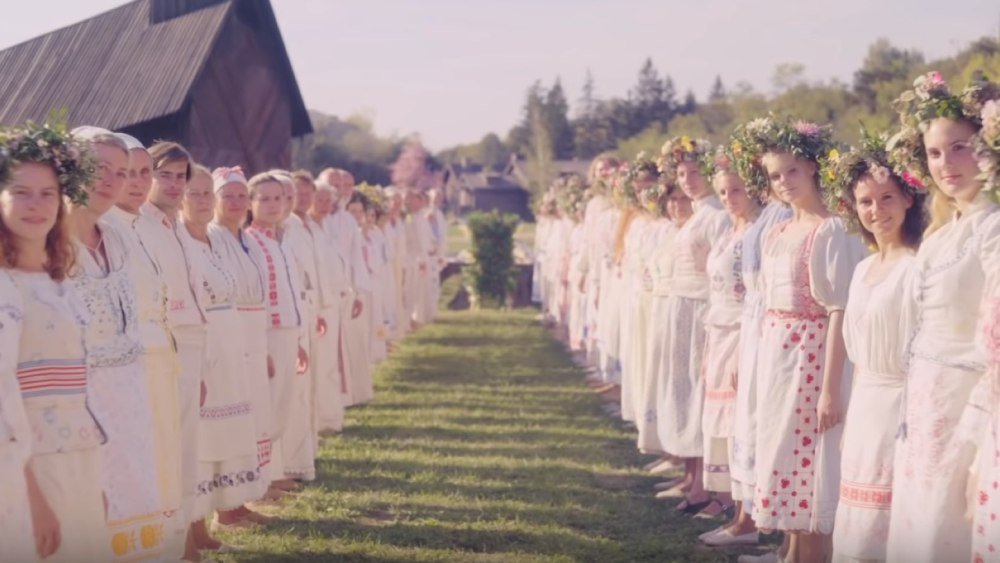 Ari Aster burst onto the mainstream scene last year with horror juggernaut Hereditary and follows it up this year with Midsommar, two films that clearly exist in the same universe but differ wildly in tone and genre. Both films showcase Aster’s unparalleled skills in tension-wrought storytelling and his knack for lingering on the uncomfortable moments for just a little too long.

Where Aster really shines, when it comes to contemporary horror, is his ability to take common narrative themes—grief, family drama, a bad breakup—and turn them into an experience that is both extremely alienating and eerily familiar. This pendulum between alienation and familiarity is perhaps why audiences’ reactions to his films are so divisive, depending on what side you swing more heavily towards. For me, Aster’s well-crafted balancing act is a sign of pure creative genius and positions him to become one of the most influential filmmakers of the 21st century.

My affinity for Aster’s films, however, goes beyond just pure admiration for him as a writer/director and is rooted in what I believe is the thematic core of his sophomore release: empathy. Midsommar is many things at once. It can be considered an adult fairy tale, a dark comedy and a folk horror, just to name a few. Broadly speaking, it follows a young couple, Dani (Florence Pugh) and Christian (Jack Reynor), on the brink of collapse who travel to Sweden with a group of Jack’s grad school buddies to experience a once-in-every-ninety-year midsommar festival. The group is invited to the festival by Pelle (Vilhelm Blomgren) who hails from the small commune that hosts the festival and his promise of an unfiltered look at rural Swedish life is an opportunity that his anthropologist friends can’t pass up. What follows is a 132-minute mushroom trip filled with ritual suicides, bear disembowelment, awkward sex scenes, and, as can be expected from Aster at this point, lots of head trauma. Although Dani, as our main character, may be on the periphery with Christian and his group of friends, the audience’s attention never falters from her as we follow her journey that begins with unimaginable grief and ends in equally unbelievable catharsis.

Dani is a character unlike any I’ve ever seen on screen before, a perfect rendition of a millennial coping with the crushing weight of what it means to be alive in a time like ours. My connection to Dani was immediate and overpowering. The movie had barely started, and I already knew exactly who she was: a woman struggling against her own empathy. She is told she worries too much about her bipolar sister while simultaneously downplaying her own struggles with mental health between doses of Ativan. She is guarded and alone in the coldness of modernity, her only interactions with family and friends taking place over a screen or as disembodied voices heard over speakerphone. The only people she seems to know in her city are her boyfriend and his friends, and she feels embarrassed by her emotions in front of them, hiding her cries in bathrooms and behind buildings. Even by the end of the film we really don’t know much about her, the only personal details being that she studies Psychology and apparently doesn’t enjoy sex. This lack of context to Dani’s character is thanks to her inability to fit in with Christian’s group who, with the exception of Pelle, never seem all that interested in her and through which we get most of our information. 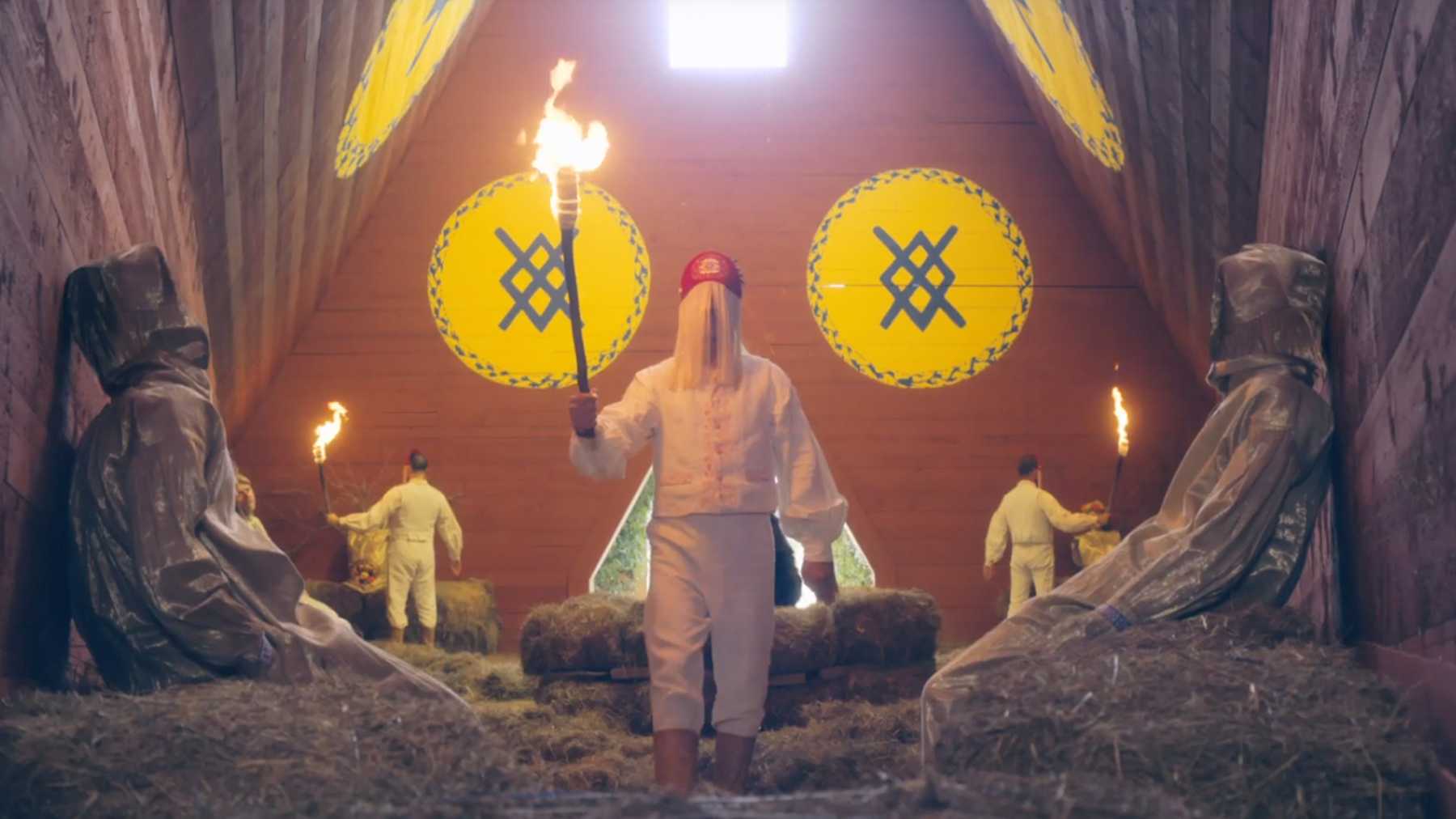 It isn’t until she gets to the Hårga that Dani begins to feel at home. There are hints of Dani being in tune with the Hårga many times throughout the film. Many of her quiet moments of grief end with her breathing out in a sharp breath, a practice that we see echoed many times by members of the commune. Dani also shows signs of sharing in the emotions of the group; at the Atastuppa she beings breathing heavily as the older woman comes into focus on the top of the cliff and locks eyes with her, almost as if Dani can feel her fear and anticipation. At the end of the film, during a wide shot that features some of the most breathtaking cinematography I’ve seen this year, Dani coughs as if smoke is filling her lungs. These instances of shared emotions make me question if the practice is part of the theatrics that Pelle alludes to early on or if it is an involuntary bond between members that situates Dani as being destined to join the group.

Dani’s story is, for all intents and purposes, quite simple: Girl becomes an orphan. Girl travels to magical place and encounters hardships. Girl overcomes what is holding her back, becomes Queen and finds the home she was always meant to be a part of. How can something like this even be described as a horror film let alone the masterpiece of millennial horror that I’m touting it to be? It all goes back to the question I asked at the beginning: what really scares us? I don’t know about you, but I’m not afraid of ghosts, demons, haunted nuns and possessed dolls, or even being put inside a bear carcass and burned alive. What really scares me is the thought of being trapped in a toxic relationship just because I can’t be bothered to start the whole dating process again. I’m scared of being too much for someone, of overwhelming them with my emotions and pushing them away. The idea of being secretly hated behind my back, of losing my entire family, of never feeling held or at home—that is what really scares me. And these are the fears that Aster makes us sit in and come to terms with during Midsommar.

I see myself in both Dani and Christian, as both the girl who doesn’t want to burden those around her with her emotions and the guy who closes himself off by putting his work before his relationships. There have been times in my past where I’ve acted as if I’ve felt nothing. Where I’ve turned away from those who needed me. I can count the number of times I’ve cried in front of my family and friends on one hand. There was even an instance, while I was writing this piece, where I reacted to getting upsetting information by not reaching out to a single person close to me and instead stifling quiet sobs in my bedroom while posting about it on Twitter. I know what bearing the full weight of your feelings can do to a person and I long for the release of being surrounded by a group of people who will cradle my head in their hands and scream with me in the middle of the floor. This scene, along with the others that featured the same scenario of shared emotion, elicited laughter from many audience members both times I saw the film. To many, these public moments of emotional expression that completely lack inhibition seem ridiculous and absurd, but I think Aster is asking us to question that reaction, asking us to turn our gaze back onto ourselves and see the dangerous repercussions of a culture who refuses to feel as one.

This message of empathy comes at an important time, a time where we are literally keeping people in cages, denying their rights and stripping them of their humanity while we look the other way. We turn off our feelings in order to protect ourselves, we shrug and say, “sometimes it can all just be a little too much.” But what the film suggests is a turning towards rather than a turning away. To open ourselves up to the effects of those around us in order to face the bad together. Without this opening up of ourselves, without this journey in empathy, we will all just end up becoming versions of Christian, emotionally paralyzed to the things around us and letting those repressed feelings burn us from the inside out.