The first half of the first season of HBO’s Euphoria has had its ups and downs. The opening segments of the first three episodes, in particular, felt like they were trying too hard and at times had me questioning whether Euphoria was a show I actually enjoyed. However, the season’s fourth episode, “Shook Ones, Pt. II,” featured Jules as the focus of the opening segment, and it had me engaged right away.

First, we learn the answer to one of my main questions: what happened with Jules’ mom. When Jules was 11 (interestingly the same age of Nate and Kat in their flashbacks in previous episodes), her mother took her on a seven-hour “road trip” to see a psychiatrist. Jules quickly realizes this isn’t a simple trip to the doctor, but that her mother is admitting her to a psychiatric hospital. It’s hard to not feel sorry for young Jules, dealing with depression and self-image, and eventually a suicide attempt. I thought the actor playing 11-year-old Jules, Clark Furlong, did an excellent job.

As much as I enjoyed this opening segment, I felt it needed some more time dedicated to it. Euphoria has used this template of a 15-or-so-minute flashback to kick off the past few episodes. For Kat and Nate, this amount was sufficient. But I want to see more from Jules’ backstory. After Jules tears up an aluminum ginger ale can and cuts her arms, Rue the narrator hits us with a number of quick facts: at some point, Jules was able to go home, her mom “went away” (possibly got sick?), and she started transitioning at age 13. That’s a lot of info thrown at us in a very short period of time. Why the rush?

Also, is there more to the story behind Jules’ mom? I previously wondered if her mom was wrapped up in some sort of drug abuse, based on Jules’ reaction to Rue’s demons with addiction. In the brief scene in which Rue says Jules’ mom got worse and went away, pill bottles are everywhere. Was she sick? Or perhaps she had some of the same demons as Rue? I hope we are treated to some follow-up with Jules’ back story in a future episode. In fact, I think it would be a mistake for Euphoria to not do so.

While the start of “Shook Ones” was familiar, the remainder took a different direction—one that I really enjoyed. Rather than bouncing around between different storylines in different locations and using a lot of Rue narration, this episode spent most of its time with all of the characters in one place—the town carnival—with the storylines transitioning with a swirling, colorful flow.

Knowing that Jules has plans to meet “Tyler”/Nate after the carnival, everything in the carnival portion of the episode had a bit of dread behind it. Classical music continuously marches along in the background with our characters—a big change in tone for Euphoria‘s music so far—building tension that in most cases actually ended up fizzling into something unexpected, like a firecracker that changes shape or color.

For me, the most interesting aspect of the carnival is that it put Jules and Nate’s father, Cal, in the same place at the same time—and in front of the whole town, including the entire Jacobs family. This is Jules’ realization of who Cal really is—not simply some random stranger she slept with in a motel. Not only is he Nate’s father, but he’s an important figure in the community, heading up the winning batch of chili at the annual chili cook-off. She approaches him to show Rue that he was in fact the man from the motel (his fumbling a cup of chili convinces her), and it’s hard to not fear what Cal might do to her. Cal comes off as a man who only cares about perfection and winning. What would a man like that do to make sure Jules does not expose his secret? 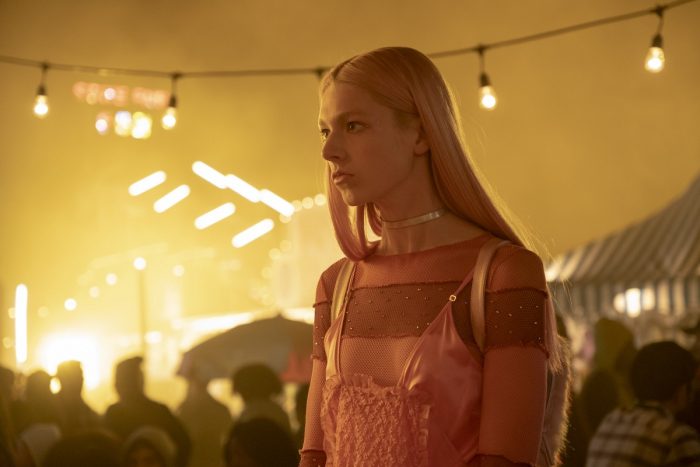 With fireworks blasting in the air and the tension rising to extreme levels, Cal begins following Jules until he finally corners her outside the carnival. At this point, I worried for Jules even making it to her meeting with Tyler/Nate later. But in a surprising twist, Cal takes a calm approach, simply asking her to not tell anyone what they did. Jules, who shows no ill will toward him, agrees to not say anything. No threats, no violence. With all of the tension built in to this interaction, I wasn’t disappointed that nothing “big” happened here. It was pleasantly unexpected, and left me wondering if we would see something similar between Jules and Nate.

While I liked how the other storylines transitioned in this episode, some of those storylines were ultimately unsatisfying. Once again I wasn’t pulled in by Chris McKay and Cassie’s relationship drama. And seeing Kat ditch Ethan to sleep with a bad-boy carnie seemed a little rash. (But maybe that’s who she is now.) The search for Rue’s sister, Gia, worked for me, helping to build on the rising tension. And in a reversal of roles, having Rue help out her sister, who is high, was a sweet moment.

Ultimately, the long carnival sequence was an exhilarating sensory-overload experience: the lights, the colors, the music, the fireworks, the building tension. I enjoyed it immensely.

As expected, the episode culminated in the meeting between Jules and Nate (directly preceded by an excellent creepy shot of Jules riding her bike through a patch of trees). Since Episode 2 I have been wondering what Nate’s motive was for secretly reaching out to Jules on the app. And after their confrontation this episode, I’m still not 100 percent sure of what he is thinking. 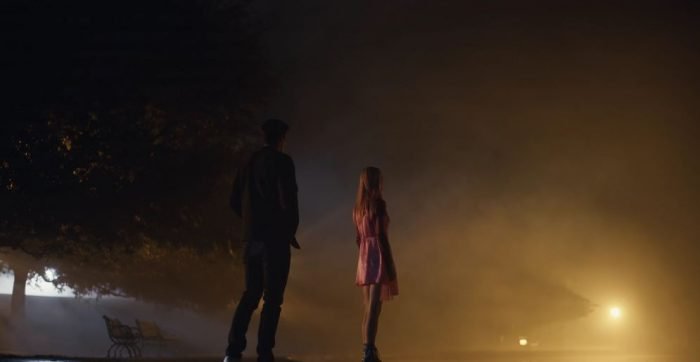 He begins the encounter by acting like “Tyler,” the man Jules has fallen for. Nate says to her, “Over the past few weeks, I’ve spent every moment of every day getting to know you,” and that he feels closer to her than anyone in the whole world.

The fictional Tyler was Jules’ idea of the perfect guy. Now that she realizes it was a lie, Jules doesn’t trust Nate’s good-guy act he’s putting on. And just like that, his personality changes on a dime and his anger shows through, grabbing Jules and sticking his thumb in her mouth, just like Cal did in the motel—a disturbing occurrence of “like father like son.”

Nate see-saws his tone again, before blackmailing Jules with the nude photos she sent him, and threatening she could end up as a sex offender for distributing child pornography. Jules refuses to back down from him and Nate walks away. So now we know Nate indeed had something bad up his sleeve with this whole plan to message Jules. But I’m still not clear about the why. We can now assume Nate has seen the recording of Cal and Jules in the motel. Is it a matter of protecting his father’s reputation? I suppose that’s possible, but I think there still has to be some other link between him and Jules. Nate is a wildcard; I just don’t know what he’ll do next.

As for Jules, I feel awful for her. She finally found (or so she thought) someone who understood her and who cared for her—and wasn’t involved in violence, like all of her other relationships with men. But it was all a lie, and I’m sure Jules will be reluctant to trust anyone for a while. Hunter Schafer as Jules was fantastic in this episode, and I think it’s safe to say she is my favorite part of Euphoria.

The episode ends with Euphoria‘s bread and butter—Jules and Rue. The two embrace and we are treated to a literal rotating montage of the two sharing good moments together as they kiss in bed. All signs point to a romantic relationship between the two not working out, so we’ll see how long these feelings last.

Midway through the first season, I’m liking the direction Euphoria is heading. “Shook Ones” was by far my favorite episode so far. I’m a little worried the show will hit some speed bumps if we see back stories of some of the minor characters over the next couple episodes. It looks like next week will focus on Maddy. Hopefully Euphoria will allow itself to continue to go in new directions and keep the momentum going.