Hey you. Yeah you, the horror-loving guy in the black t-shirt. I see you. I’ve been seeing you the bulk of my natural life. And y’know what? I never get tired of it, or your wardrobe.

Tuesdays, it’s Texas Chain Saw Massacre. Wednesdays? MonsterVision or The Last Drive-In. And at the end of a long, hard work week, it’s Jason—always Jason—one of the three dozen Friday the 13th t-shirts you own. How do you tell them apart? Do you categorize or do you just grab one?

There’s some metal in there too: Slayer, Metallica, Motorhead, Pink Floyd. It doesn’t matter which one you wear, Black T-Shirt Guy. You complete me. I say this like we know each other. We don’t, not really. But to paraphrase Hannibal Lecter, you figure largely in my values system. 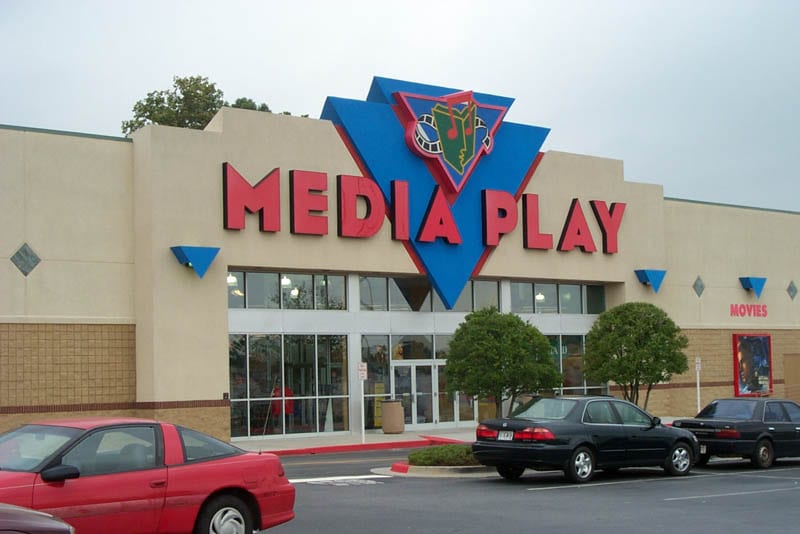 The horror aisles of the 90s were a lonely place for a female. Whether it was Blockbuster or Hollywood Video, those aisles were my home and nine times out of ten, I was the only girl there. I know there are thousands of women who can say this. We were just never at the same store at the same time.

At Blockbuster, the bloody spine of Dario Argento’s World of Horror stopped me in my VHS tracks. I’d been a horror fan from the age of six. But Dario made me hardcore. He introduced me to the giallo and taught me that violence could be cinematically beautiful. I didn’t need Dario (or any man) to tell me that. I just needed him to show me.

If Blockbuster was where part of me was born, MediaPlay and its Anchor Bay selection was where I became a woman. Every Saturday morning I went there alone, even after I got married. He wasn’t interested and eventually, I felt the same about him. What I stayed interested in was horror. And you, Black T-Shirt Guy, were my steady.

Not that we talked. You with your dark mystery, your Parent’s Basement vibe, and what I imagined were your catchphrases: Leave me alone and No really, leave me alone. I wanted to talk to you. To tell you I felt weird but not weird enough. You would have agreed, but you never looked up.

The video big box is all but dead, but I can still find you in your remaining natural habitats Black T-Shirt Guy: used media stores, playing DnD, Meetup groups, and now the aisles of Twitter. Sometimes I see you in full-out cosplay at the local park. In a world where weird is too much hidden, thank you for self identifying.

Writing about you, I can’t help but think of The Stones:

Please allow me to introduce myself, I’m a man of wealth and taste…

For me, that’s just you Black T-Shirt Guy, with a few clarifications:

a) You are not the Devil (unless you want to be);
b) You’re a man of taste but wealth? Probably not; and
c) You sure as hell don’t need my sympathy.

You’ve been around for a long, long year. Even longer than most of us think…

When the inmates escape in Halloween, Nurse Marion asks: “Since when do they let them wander around?” Since forever. Black-T-Shirt Guy, your well-worn rebel’s uniform forms the very fabric of society. It wasn’t always cotton. Before the Industrial Revolution and the mechanized loom, you wore a knight’s armor, a Ronin’s. After that pirate, definitely pirate. Maybe Viking. I see you navigating long, seafaring voyages from the crow’s nest—alone, in the dark, above yet part of it all.

You came to America, the eternal experiment—not for the money, not for religion, just to get out. You found your place, you planted your flag, you made your way, keeping things weird, helping the world stay obsessed with its own dark corners—jingoism, hit parades and sitcoms be damned. In the 50s you donned black leather, forebear to the black t-shirt that emerged around Woodstock and would never leave. Fashions change, but not yours. I imagine you on the red carpet at the Academy Awards:

“Who are you wearing…Michael Kors?”

The Myth, The Black T-Shirt, The Legend

Friend, you would have loved Joseph Campbell. Maybe you already do. One of the finest mythologists of our age and kindest prophets, Campbell encourages us to “Follow your bliss”—something every horror fan understands. Campbell’s masterwork, The Hero with a Thousand Faces, reflects his lifelong study of The Hero’s Journey and its common themes across myths and cultures. 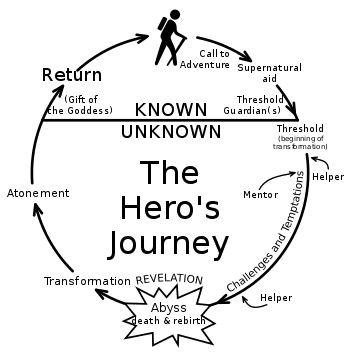 Here’s how I imagine your Hero’s Journey, Black T-Shirt Guy—a journey, and this is important, that applies equally to horror fans of all wardrobes and genders.

The Call to Adventure, in which The Hero leaves The Ordinary World and is brought to Horror. Age: 3-8. Event: Parent, parent figure or bad influence showed you your first horror film:

The next stage, Refusal of the Quest, doesn’t apply. With horror once you’re in you’re in. How fast, how deep, and how hard is up to you.

Next up? Entering the Unknown and a new world of mystery, wonder, magic and fear awake. Across multiple stages, your Guides appeared. Maybe the older kid across the street evolved your obsession, became your first Horror Helper and introduced you to your lifelong Horror Teachers: Romero, Savini, Argento, Joe Bob.[1]

On your way to Reward and Mastery you Return Home, forever changed. You’ve faced your Tests, perhaps even The Supreme Ordeal. This is where I leave you Black T-Shirt Guy. Only you know this part and you might still be in the middle of it. Even so, I’ll bet you’re also someone else’s Horror Teacher, The Hero with a Thousand Black T-Shirts. This Adventure never ends.

To the Horror Heroines

Horror sisters, I haven’t forgotten you. How could I? Cis or trans, you’re my heart and soul. We’re not a force to be reckoned with in this genre. We’re just plain force. It’s just that sometimes, I feel like a 12-year-old boy (also in black t-shirt). I like the occasional fart joke and I can appreciate a nice rack in an 80s slasher as much as the next person. I tend to associate these things with men more than women. For that, I’m sorry. I’m an imperfect Feminist but I’m a perfect horror fan.

I grew up in the Eighties but it might as well have been the Fifties. My grandpa-aged father was an ex-military man with an authoritarian streak. I always stood up for myself though. I cheered at age six when Gloria gave her women’s right’s speech on All in the Family. Dad didn’t like that. My only inheritance was a hair-trigger Fight Me! response that made me who I am today—kind, a bad ass, and sometimes just an ass. Those responsible for my Supreme Tests taught me to understand fear and value inclusion. My dad helped make me a horror fan though he never showed me a single film. He definitely made me a writer. 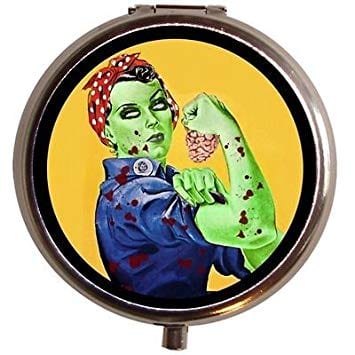 So I know I wasn’t the only woman in those video aisles. Last year I went to my first horror Meetup, fully expecting that sea of black t-shirts. At least half of the group were women, many in their 40s like me. This was my first foray into Horror Community and helped me realize things had changed. Sometimes I miss being the token female. Otherwise, I just love being a Mutant. We’re the friendliest people once we let you get to know us.

Last week, I committed a slight infraction. I approached a familiar Black T-Shirt Guy at the Friday Meetup. I shot him an “Oh hey!” and stuck out my hand for a shake. He looked at me like I had worms crawling out of my ears. That would have gone over better. He either didn’t remember me, didn’t care or just didn’t want to be bothered. I recovered but it taught me an invaluable lesson. Interacting with a Black T-Shirt Guy is like owning stock: past success is no guarantee of future performance. As Michael Anderson says in Storm of the Century: “In this world, you have to pay as you go.” Sometimes, one black t-shirt at a time.

I’d be lying, Black T-Shirt Guy, if I said I wasn’t still a little intimated by you. Am I cool enough to be in your club? Can we be friends? Am I legit? I shouldn’t worry. In my horror community, more than a few of you are in my corner. Maybe at the end of the day I still want you to be my Bogey, to say “You’re a good man, sister.”

Like I said, I’m an imperfect Feminist. I also know that we women don’t have to be accepted by or act like one of the guys to take our horror hardcore.

Some of you guys will neither need nor want this tribute. That’s fine. You still make me feel less alone. So to all the Black T-Shirt Guys I’ve loved before—and to every Mutant of every gender—this one’s for you. Sometimes we still feel like we don’t belong. But do any of us want to completely lose that?

Laura Beerman giddies up weekly as The Gratuitous Blogger for Joe Bob Briggs and The Last Drive-In. She earned a graduate degree in Early American Literature, has written professionally for more than two decades, and has been interviewed by The Wall Street Journal and other industry publications for her day-job insights in healthcare. Laura lives in Nashville with her horticulturist husband The Greenman and her four cats. Find her lurking her at joebobbriggs.net, DiaboliqueMagazine.com and forthcoming for Soledad at www.facebook.com/nostalgiakinky