German-Australian identical twin brother directing duo the Spierig Brothers (Undead, Daybreakers) took a drastic left turn into heady science fiction territory with Predestination (2014). Their third film was a departure from the horror fare the duo had become known for in previous efforts. An adaptation of famed author Robert Heinlein (Starship Troopers, Revolt in 2100)’s short story All You Zombies (1959), the film would see the duo travel into much more philosophical and intellectual territory than any of their films before or since. Fans of their previous work in the vampire and zombie horror subgenres were at risk of being entirely put off by Predestination, especially those that weren’t already familiar with Heinlein’s story. The Spierig Brothers were willing to take the risk regardless, and it paid off with a meditative, thought-provoking time travel film anchored by two great lead performances from Ethan Hawke (First Reformed, Before Sunset) and Sarah Snook (Steve Jobs).

Predestination is a completely different type of time travel film than anything you’re likely to see. There’s no comic relief at watching a character try to fit into a previous cultural era saddled with big-budget special effects a la Back To The Future (1985). The Spierig Brothers, in bringing Heinlein to life, tackle many of the same elements from his original story while also adding an entire element all of their own. Predestination asks questions about the very consequence of time travel itself. The film tells the story of two characters chatting in a bar. One, John (Sarah Snook) goes by the moniker the Unmarried Mother due to the advice column that he writes for women. The other, known simply as The Bartender (Ethan Hawke) is actually a time traveler to be revealed later.

Predestination is not a perfect film. Heinlein’s original short story was already complicated enough, but to add an entire narrative about the time traveler’s hunt for the “fizzle bomber” (ridiculous name) can sometimes just make the whole affair seem maddening. If the fat were trimmed to just the retelling of All You Zombies, Predestination would have possibly worked much better. All the points of paradoxical predestination are already there, and the hunt for the “fizzle bomber” just really comes off as a bookend that was mostly used in marketing campaigns to sell this slow-burn psychological science fiction film as a more traditional action-heavy sci-fi/thriller hybrid. It’s the kind of movie that the Spierigs had done up to that point, but it’s hard to square the marketing of Predestination to the actual tone and pacing of the film itself.

The best parts of Heinlein are still well intact, however, and Predestination is a film that audiences will keep talking and arguing about long after the credits roll. The fundamental initial question in the film is if someone offered you the chance to kill the person who hurt you the most in life would you take it? Most people would probably answer yes without ever thinking about any of the possible ramifications. The Bartender/time traveler listens to John tell his entire life story about being born a girl in 1945 in an orphanage and raised to join an elite space training program for females to be  “sexual assistants” to male astronauts.

After being booted from the program for a fight with another trainee (or so she thinks), John (then Jane) falls in love with a mysterious older man who leaves her impregnated without a trace. She has an emergency C Section during labor, giving birth to her child who is stolen from the orphanage. During her pregnancy, Jane is informed that she was born with both male and female reproductive organs. The C Section destroyed her female organs, so now she would have to learn to live as a man. If that sounds like a lot to take in, that’s because it is. But wait…there’s more! The big twist comes when after telling the Bartender his sad tale of woe, the Bartender reveals himself to be a time traveler to John and offers to take him back in time to kill the mysterious man that impregnated him when he was still a young Jane. The Bartender offers John a chance to kill the man that left her there long ago to transition into a man all by their self and see his baby be stolen in the night.

Funny thing is the mysterious stranger that impregnated Jane was the time-traveling John himself, taking the bartender up on his offer. You read that right. John and Jane are the same person. The Bartender takes John back to the night where Jane met the stranger intending to hide in the shadows and murder said stranger, thus fixing everything that had happened to Jane. She would be able to rejoin the space program or some other field that suited her intellect and go on to do great things, and John would then go on with the Bartender to take his place as a time-traveling cop for the Temporal Corps. The only problem is that Predestination isn’t that type of time travel movie. It would be much more accurate to call it a film about time loops.

When John first sees Jane he’s taken back at how beautiful she is. They accidentally bump into one another and that’s when the audience too realizes that the mysterious stranger is none other than John, an older version of Jane herself. They have an affair for months before The Bartender comes back to fetch him. That means that Jane and John’s baby is the product of two different versions of the same person copulating. The Bartender/time traveler is then revealed also to be the baby snatcher, stealing John and Jane’s baby and taking it back in time to 1945 and placing it in an orphanage…the same orphanage that Jane grew up in. Jane and John’s stolen baby is Jane. Come again?

The bartender/time traveler creates a never-ending time loop; a predestination paradox. A predestination paradox refers to events carried out by a time traveler that cause the future events that they are sent back in time to stop in the first place. One has zero idea what the ramifications of something like time travel would cause. Nothing is ever as simple as making your brother and sister reappear in a photograph by making sure your dad has sex with your mom. In this case, your dad is your mom…is you? 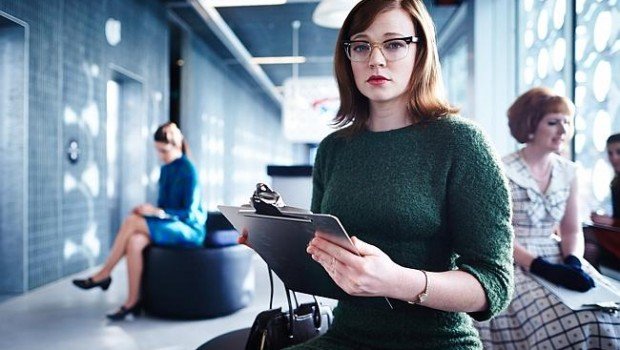 Once a time loop or paradox has been created it acts as a sort of fixed loop in time and space with the events of the time traveler not just affecting the past but dictating the future and the present. The paradox calls back to the old question, “Which came first? The chicken or the egg?” Predestination actually sees the time traveler ask this question to himself aloud a few times in earnest. Once a loop is created, there is no beginning or end, thus the significance of the Ouroboros, or what the time traveler refers to as “the snake eating its own tail.” It’s a cycle of events looped throughout space and time that once started, has no true beginning or end. Time traveling doesn’t stop the events in Predestination; it determines them.

It’s an idea that is just outside the realm of human understanding. The kind of time travel that Heinlein wrote about and that the Spierig Brothers adapted isn’t necessarily made for mass consumption. There’s always going to be a contingent of audiences that just aren’t interested in thinking about these types of concepts. Predestination, for better or worse, is more of a thinking person’s type of science fiction film. There’s no straight line back to the past nor a clear cut way to get back to the future. Once the time travel kit has been activated, the loop opens and pre-determines everything until it’s impossible to tell which came first, the time travel or the events themselves. Would any of the events you are trying to prevent have happened if you or someone else would not have tampered with time to begin with? Could you ever really know?

Predestination espouses that time travel could create a paradox in which there is no longer such a thing as free will. Everything has already been decided and will continue to play out that way in a loop for all eternity unless someone else comes along to change it, but even that seems like it would only create another loop as easily as it would ever manage to cancel out an already existing one. The time traveler will always still be positing as a bartender in 1970, talking to a version of himself that is also his mother, lover, daughter,  and trainee. The bartender and John are themselves the ouroboros, one big snake just constantly eating its own tail.