Some shows start off great but end up sticking around too long. Whether they jump the shark, or just otherwise overstay their welcome, this is the theme of 25YL’s Cancelled Too Late series. This week we look at 3%, which started by exploring a question about meritocracy but turned into something flat and boring.

When 3% came out on Netflix in 2016 and I discovered it, I was blown away. I’m a sucker for dystopian fiction, but the premise here—that everyone at the age of 20 has a chance to become a part of a purportedly utopian society called “The Offshore” if they can make it through a series of trials called “The Process”—struck me as immensely fascinating.

The show is in Portuguese, and I find this necessary to note because when I went to watch the first season again before the second was released, I found Netflix defaulting me to an English overdub. Don’t watch it that way, because, as David Lynch would say, you’ll think you’ve seen the show when you haven’t, and that’s such a sadness. It erases the performances of the actors.

And those, amongst other things, serve to make the first season of 3% a brilliant piece of work that I will continue to recommend. We meet young people, such as Michele (Bianca Comparato) and Fernando (Michel Gomes), as they prepare to enter the Process and get a glimpse of what life is like for those Inland.

It is not good, but as the show gets going we aren’t really told why this is the case. I found this to actually be a strength because the central question of Season 1 was fascinating. Accept the set up that a majority of the population lives in squalor while 3% lives in a paradise, but that there is a process open to everyone that allows them in principle to become part of that 3%—is this fair? Do the causes of the squalor matter? What if it is not the fault of the 3% but something else that led to this? 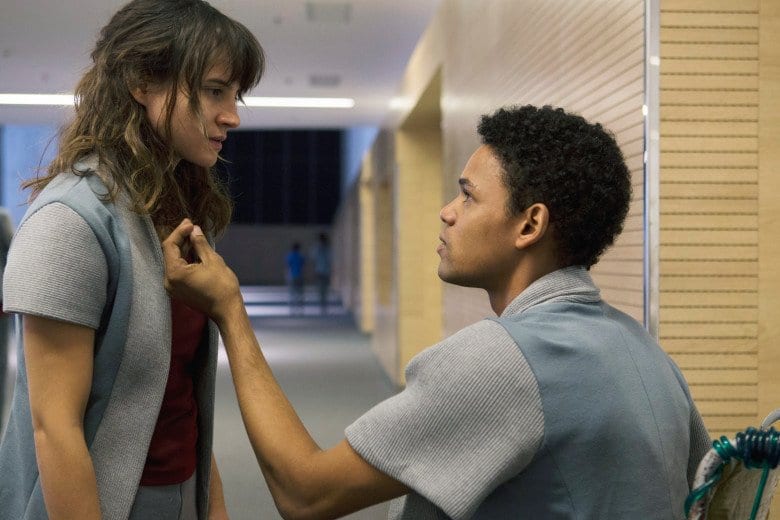 What we are presented with is something that truly explores the idea of meritocracy, as the first season focuses precisely on the process that decides who does and does not make it to the Offshore. Remember, you create your own merit.

And so, we are led to ask whether this process is actually well designed in terms of selecting the best among us; or, at least, this is the question I found myself pondering the most during Season 1. At times it seems like maybe it is, as the candidates are tested not only for their reasoning ability but in terms of their moral fiber. At other times, things get more questionable, as when candidates pass a test even though they have cheated or stabbed someone else in the back. But there is an ambiguity that runs throughout if you view it from this angle, with Ezequiel (João Miguel) trying in good faith to select the deserving and weed out those who are not so. I found myself constantly pondering not only if he was doing it well, but if I could do any better.

Of course one could argue that this kind of inequality is unjust on its face. Despite the fact that the Offshore is said to be without crime (until recently the first murder has occurred) and so on, the whole setup flies in the face of our democratic ideals.

And yet, the inequalities in the world we live in are actually worse, if we look at things like wealth and income. I don’t know where the 3% number came from, and the show does little to make it hold up to scrutiny, but if we look at the world we inhabit, the number would be more appropriately around 1%, or maybe even 0.01%.

And if there is a defense of this, it is precisely centered around some notion of merit. The wealthy earned their wealth. It’s open to everyone. This is the structure that 3% thematizes through its fictional world, where life in the Offshore is open to everyone in principle, so long as they can make it through the Process.

Thus it is those two questions that I think the first season of the show explores brilliantly: 1) is the Process a fair way of determining who is deserving?; and 2) even if it is, is this a just system?

Because the inequities are there, nonetheless. The people of the Inland live in squalor, and we have to wonder if they need to. Whether, or to whatever extent, they are being exploited by the people Offshore, the Cause has a point: these are human lives, and to treat them as chattel for the Offshore is degrading.

But let’s take this point seriously for a moment, which 3% was at least on the verge of making: despite any question of merit, or how good life might be for those who make the cut; despite whether doing what they do is something that is in principle open to everyone, or how good the Process is at doing what is supposed to do, is there something fundamentally immoral about a system like this?

I think there is.

And if you take that point, well, then you’ll have to recognize all of the ways in which the society we live in is unjust, because it means that even those who are dumb, untalented, immoral, and ugly deserve a shot at a decent life. Or, if you hesitate to take that point, maybe this whole idea of the Offshore should strike you as somewhat appealing.

I will admit that it did for me and that the twist presented at the end of Season 1—that everyone who goes has to be sterilized—actually made it even more so. I have decided not to have kids, and generally don’t like them (yours are great, though, don’t worry!), so I’d be happy to go live in a place without them, full of adults who have passed a test to show they are worthy of being there.

I wanted to imagine the Offshore as the utopia it was purported to be, not because I think this kind of arrangement would actually be just—it wouldn’t be—but because presenting it as thus would further push the questions I mentioned above, and that’s where I thought the strength of the series lied. Instead, the second season of 3% makes it clear pretty quickly that the Offshore was bad in a moral sense (and maybe not so great in terms of quality of life), and while it also explores the intentions of the founders and what went wrong, it loses what made Season 1 so intriguing.

The Cause is right, and the people running the Offshore are assholes. The arrangement is unjust and the question is what to do about it. Maybe the tactics of the Cause are questionable, but the morality of the situation is no longer in question. We move from something nuanced that explores questions about meritocracy to something flat that is driven by action more than anything else.

Most egregious, to my eyes, is what the show does with Ezequiel in Season 2. He was compelling in the first season: this guy whose wife had killed herself, taking care of this little boy who lived Inland, while at the same time running the Process. And with those scenes with Michele towards the end of Season 1, where he discovers she is with the Cause but brings her around, there was an immense complexity to this character.

Season 2 flattens it, unfortunately, and that is its gravest offense. But it kind of does this to everyone. Instead of the nuanced drama we got in Season 1, we’re now offered something far less interesting: a battle between the Inland and the Offshore, with questions as to how it should go about.

It was only inertia that led me to finish the second season of 3%, and I won’t be watching the third, which came to Netflix recently. Maybe I just didn’t realize the kind of show it was going to be, and if you’re still watching and enjoying it, I’m not trying to convince you that you shouldn’t be. But in my opinion, it lost its way. It started out as something so intriguing that I will continue to recommend its first season to everyone (but watch it in Portuguese with subtitles for the love of God!), but I can’t recommend going further.