Here at 25YLSite, we handle a lot of heavy lifting. Analysis, interpretation, deep discussion, introspective interviews…you name it; we’ve got it. “Favorites” takes a lighter approach to the material we normally cover. Each week, we will take you through a list of favorites—whether it’s moments, scenes, episodes, characters, lines of dialogue, whatever!—in bite-sized articles perfect for your lunch break, a dull commute, or anywhere you need to take a Moment of Zen. So, sit back and enjoy this week’s offering as part of our month Celebrating Women on screen and behind the camera: Laura Stewart’s favorite roles played by Laura Dern.

Laura Dern is absolutely at the top of her game right now. She has played some remarkable characters over her long career. David Lynch works with her as often as possible, knowing full well just how wide her range as an actress is. Laura was born into acting, quite literally. She was conceived while her parents, Bruce Dern and Diane Ladd, were on the set of The Wild Angels.

She became an actress when she was just six years old and never looked back. What most amazes me about Laura is that despite looking pretty much the same in her all her roles with her long blonde locks (Diane in Twin Peaks and Vice Admiral Amilyn Holdo in Star Wars: The Last Jedi excluded), none of her characters are even vaguely similar. Every character she plays really does seem to be a different woman. There are very few actors that can pull that off (Tom Hanks is the only other actor who springs to mind).

So here are my favourite roles played by Laura Dern. Yes, most of them are Lynch characters, because let’s face it, he writes the most interesting ones. Let’s Rock!

Sandy Williams is the deconstruction of fantasy, particularly that of The Girl Next Door. Although Laura Dern was just 19 years old when the film was released, she was richly invested in the character of Sandy’s teenage innocence.

Clad in cozy cardigans and pretty sundresses, Sandy stands in direct contrast to Dorothy Vallens (Isabella Rossellini), the other leading lady in Blue Velvet. Sandy represents the suburban ideal, which attracts Jeffrey even as he travels further into Dorothy’s forbidding domain. Sandy is a constant presence in Jeffrey’s mission, cautious of but not entirely repelled by his morbid curiosities. She only wants to love and be with Jeffrey and casts herself as his partner-in-sleuthing because it will hopefully pay some more personal dividends. Consequently, when she learns that Jeffrey and Dorothy have been having sex, she is devasted, but quickly forgives Jeffrey without a single hitch.

While Sandy may not be winning any “feminist of the year” awards, she was played to perfection by the teenage Laura Dern. She had the look of innocence and naivety, and that crying face! There’s just no expression to match it on any other actress. This role would begin a relationship between Laura and David Lynch that has lasted for decades. He clearly saw what a wide range she had and he never cast her in the role of timid sweetheart again, knowing she could do much bigger, bolder, and more complicated characters. 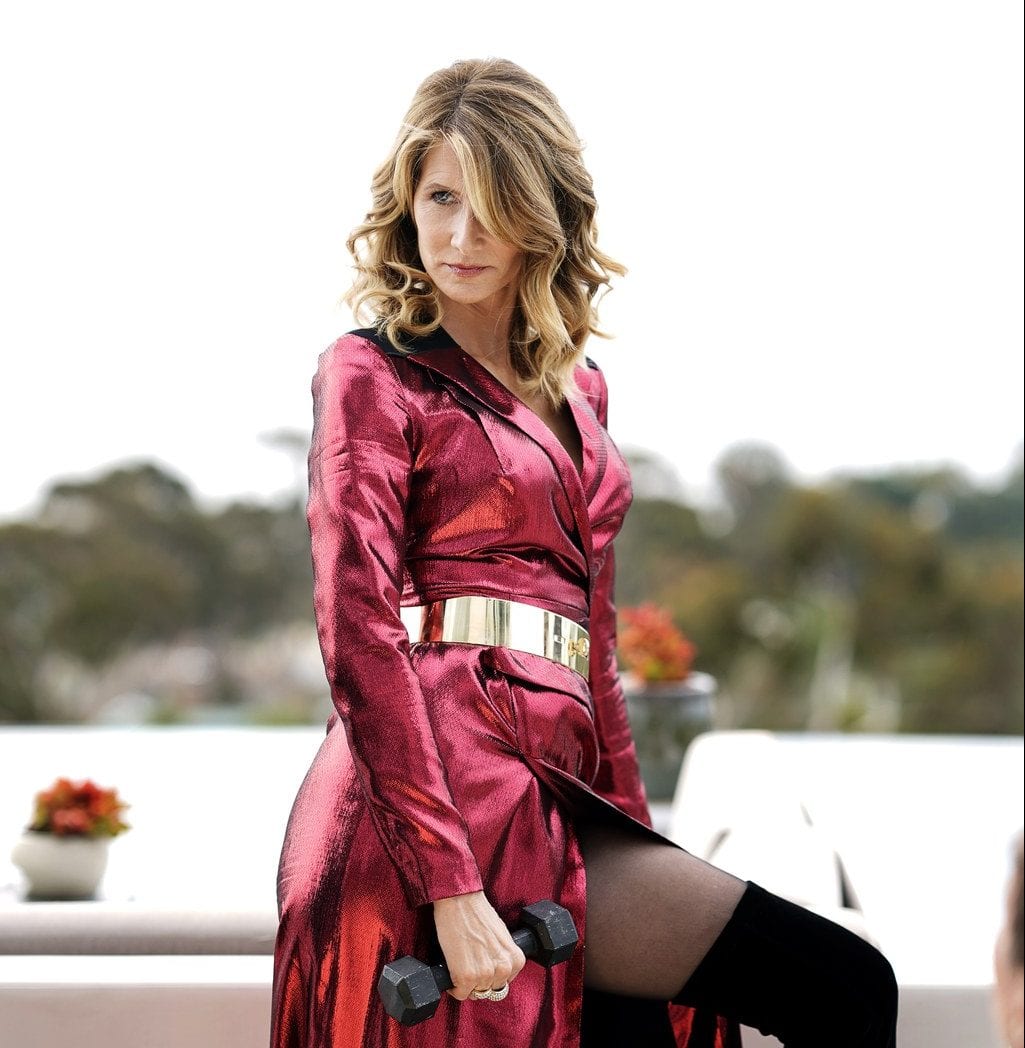 From one of her first roles to her most recent: in Big Little Lies, Laura Dern stars as Renata Klein and she is everything right now. We didn’t see too much of her in Season 1—she was a nemesis to Madeline (Reese Witherspoon) up until the last minute, when she looked out for her fellow school moms in the battle against toxic rapist, Perry (Alexander Skarsgård). The Monterey 5 now share the weight of a very big secret and not so little lie. The effect of this on Renata has made her cold and distant with her husband and constantly anxious, which is rubbing off on their daughter. She is speeding headfirst into a wall, with her husband’s arrest for fraud and subsequent impending bankruptcy tipping her close to the edge. While it is terrible to see her fall from grace, it is awarding us with some of the best acting we’ve ever seen from Laura. She is sassy, terrifying, and hilarious and with some of the best foul-mouthed one-liners I can remember being delivered by a woman. Laura seems to be having the time of her life portraying a crumbling second-grade mother, a woman the school principal described as “Shakespearean.” She’s flexing a comedy muscle, and she’s doing brilliantly. Every scene with Renata is the highlight of the episode, and we do not doubt that she will be rich again. 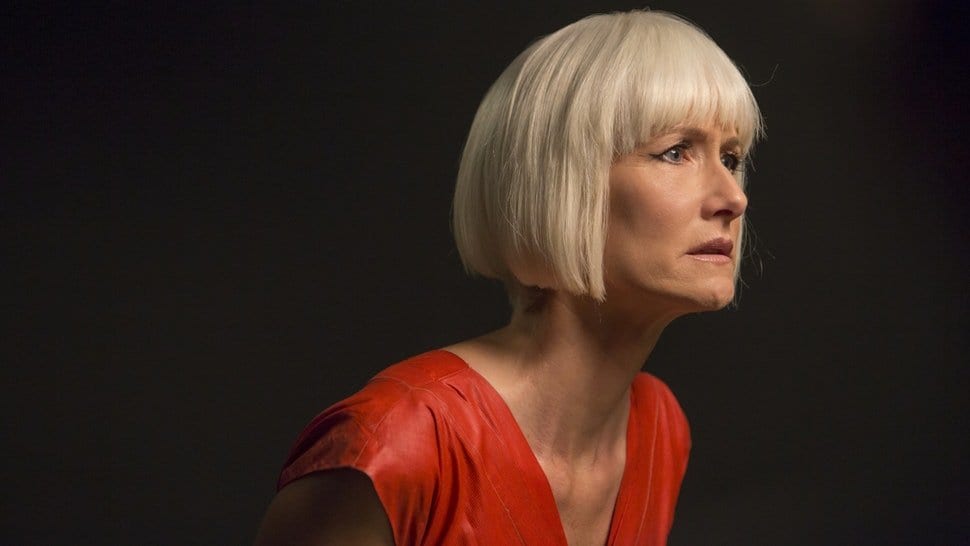 Laura Dern had some big shoes to fill when it came to playing Diane in Twin Peaks. Prior to Season 3, Diane had existed purely in the form of a dictaphone to which Agent Dale Cooper addressed her as his personal secretary, revealing some of his deepest thoughts and sending her memos. The pair had a special, almost secret relationship—Diane knew a side of Cooper that pretty much no one else could get close to—but there was always some doubt that she really existed at all.

Well, in Season 3 she was revealed as a “real” woman: a platinum-haired, kimono-wearing, chain-smoking, liquor-swigging, “fuck you”-attitude type of gal—and it wasn’t really what fans expected at all. I guess we thought Cooper would have a Miss Moneypenny-type secretary, but I have some theories about this. (Keep that thought for another article by me coming soon!)

Even if she wasn’t the Diane we were expecting, Laura Dern gave the performance of a lifetime. In the end, she played two versions of her. We didn’t see much of the sweet, pillar-box-red-haired version, but it was enough to see a notable difference in their personalities. It turned out that platinum Diane wasn’t real at all; she was a Tulpa, a thought form brought to life by Cooper. As with many of Lynch and Frost’s characters, Diane instantly became a fan favourite: an iconic image with an iconic attitude. I doubt very much that anyone would have been able to pull it off like Laura Dern did. 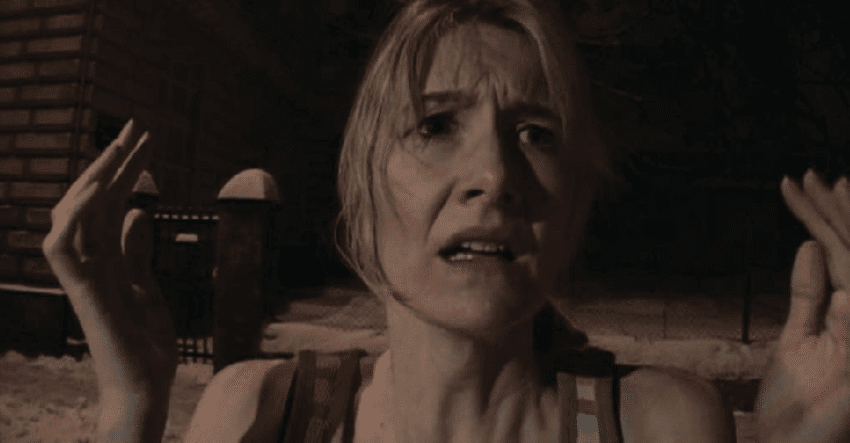 There’s a good reason why David Lynch sat on the side of a road next to a cow, with an Inland Empire billboard, suggesting the Academy consider Laura Dern for the Best Actress Oscar. Because she absolutely deserved it.

Laura plays Nikki Grace, an actress working on a film called On High in Blue Tomorrows. Nikki becomes so immersed in her role as Susan Blue that she starts to become her and begins living in her world. For this role, Laura flits between characters, accents, and affections, following Lynch as he plumbs deeper and deeper into the multiverse that is Inland Empire. Which other actress would agree to sign on to a project without a script, shot on “toy cameras” (Lynch’s words) over a period of years with the possibility that no end product might ever result? Kudos to her for that, but even more so for being an actress who pushes herself through a range of characters, a gurgling bloody death sequence, long stretches where she’s required to perform all the different shades of confusion, and, most horrifyingly for any performer, allowing her own face to be stretched and distorted into a kind of death mask at the film’s terrifying conclusion. This is why Laura Dern is The One.

Last on my list, but certainly not least, is Lula Fortune, my favourite Lynch character of all time (even if she was created by Barry Gifford). The love story of Sailor & Lula in Wild at Heart is important to me. I’m an old romantic and I truly believe that love can conquer all.

A far cry from her first role as Sandy in Blue Velvet, Lynch cast Laura in this role without considering anyone else for it. It was the first time she got to play an overtly sexual character—a woman who was comfortable with herself, her looks, and her love for Sailor. Yet Laura brought so much depth to a character that might otherwise be written off as a typical Southern Belle type. Lula wasn’t the most intelligent girl in the world, but still curious. She had a deep mind, and she cared a lot about the world. Too much maybe, but while she appeared to be vulnerable and needing someone to look out for her, she was actually the strongest character in the film. While her mother breaks down and Sailor gets sent to prison, she is left alone to raise their son. Laura doesn’t overplay Lula’s fragility; in fact, nothing she has done before or since prepares us for the lusty vividness she brings to the character. She is raunchy, radiant, and cosmically beautiful. Her passion and dedication inspire me daily. Lula and Sailor mark me the deepest.

It is not just on screen that she shines. Laura is an advocate for Down Syndrome Awareness, something that I am personally involved with as a mother of a child with DS and founder of a DS Charity. Laura Dern is a star in every sense of the word, and the world is lucky to have her.