As a screenwriter, he’s got a very specific style. It’s not for everybody. It’s fast-paced and dialogue-driven, with humor that comes from sharp wit as opposed to deliberate comedy. Sorkin likes smart people and isn’t afraid to demonstrate that he is one. He isn’t everybody’s jam. I get that. A friend of mine tried to watch The West Wing, and she said that the fast pace of it made her nervous. She felt like she was missing half the jokes, and that everyone needed to switch to decaf.

When Sorkin got his Academy Award for writing The Social Network, I wasn’t surprised. It was a terrific film, and David Fincher was a perfect director for Sorkin’s screenplay. When the Steve Jobs movie came out, I rushed to see it, expecting the same things. I was disappointed. Not in the performances, of course. And it’s not like Danny Boyle isn’t a good director. I loved Trainspotting and Shallow Grave. But his style and Sorkin’s just didn’t mesh well together. The entire film felt like the visual storytelling was clashing with the screenplay.

So, when I heard that Aaron Sorkin was going to direct as well as write his upcoming movie, Molly’s Game, I looked forward to a big hit. Jessica Chastain, Idris Elba—what’s not to like? The story is true, as well as fascinating. And it did pretty well both financially and critically. So why is it that whenever I mention it, even to other Sorkin fans, I almost always get the same response? “Haven’t seen that yet, I keep meaning to.” Seriously? What are you waiting for?

Molly’s Game is the story of Molly Bloom. I hadn’t heard the name outside of James Joyce’s novel Ulysses. But she lived what for some could be an entire lifetime before the age of twenty. A competitive skier, her Olympic dreams came to a halt when a freak accident injured both her spine and her chances. Like so many others, she went to Los Angeles to start over, and a whole new life began.

Bloom’s book, on which the film is based, is called Molly’s Game: The True Story of the 26-Year-Old Woman Behind the Most Exclusive, High-Stakes Underground Poker Game in the World! She ran games attended by movie stars and moguls on both coasts. She was finally taken down by first the Russian mob, and then a RICO indictment. She wrote an autobiography as a way to pay off debt after the government confiscated her entire bank account. The book didn’t do particularly well, because she refused to name names. Apparently, Molly Bloom was a fan of Aaron Sorkin’s, and she was the one who approached him to adapt her story for the screen.

Critics of Aaron Sorkin have often called him sexist. I’ve never seen him that way. I’ve seen everything he’s ever done. While it is fair to say that his gender and his privilege sometimes fetter him, I’ve always felt he was doing his best to be an ally. When his attempts to speak for women are occasionally clumsy, it’s not because he isn’t trying. In Molly’s Game, it isn’t clumsy. Maybe it’s because the source material was written by Bloom herself, and thus helps him embrace a perspective other than his own. Maybe he’s just getting better with age. I don’t know. But this was going to be his first directorial effort. The stakes for him were high, and this is the story he chose to tell.

Obviously, it’s a female-driven story. Jessica Chastain’s portrayal of Bloom is subtle and beautiful. Like David Mamet, Sorkin’s style of writing is a song that not everyone can sing well. Michael Fassbender, while undeniably talented, either didn’t feel that song himself when he played Steve Jobs or else he was directed not to do so. Both Chastain and Elba turn out to be virtuosos at Sorkin’s music. Their chemistry is fantastic, and get this—they don’t become romantically involved. Not even a little bit. And by Hollywood standards, especially when you’ve got such eye candy as these two to work with, that comes as a surprise. It would have been easy enough to go there. Elba plays Bloom’s defense attorney, and I’m sure some studio exec suggested they stick some sex into the relationship. It doesn’t happen. It’s not even hinted at. And nor should it have been, because it would have distracted from the story. But you know Hollywood.

Idris Elba’s character is another Sorkin Charlie. Fans of Sorkin’s work notice that the name Charlie pops up a lot. Charlie is always the guy with the clue, the one who is just a little bit smarter or cooler than everyone else. Sorkin explained this phenomenon in a letter to his daughter that was published in Time magazine. Charlie would have been the name of the older brother his daughter would have had, but for a tragic late-term miscarriage. I think my favorite Charlie Jaffey moment is when he is trying to convince the opposing legal team to drop the charges against Bloom. “This woman does not belong in a RICO indictment. This woman belongs on a box of Wheaties!”

In real life, Bloom’s attorney was Jim Walden, and I don’t know if he has kids or has ever read The Crucible. In the film, lawyer Charlie Jaffey defends Bloom pro-bono because his twelve-year-old daughter admires the Poker Princess. It’s lovely. At one point, in the middle of all the angst of Bloom’s indictment, Jaffey asks Bloom if he is doing the right thing when he assigns his daughter Stella extra schoolwork. Bloom quietly tells him the story of a young woman she once knew. This girl had sold herself to a rich playboy for a weekend, in exchange for a Chanel bag. “Whatever you’re doing with Stella,” she says, “double it.”

Sorkin has often said he writes for people, as opposed to men or women. As stated earlier, this works for him some times better than others. This is one of the times where it works. As with the romance thing, it would have been easy to sexy up the film by sticking Jessica Chastain’s ample charms in our faces. And no one can say she isn’t sexy. But it’s matter-of-fact, and not played up in any way. When Bloom says she has neither dated any of the players in her game nor taken money for sex, you believe her. And when an Italian mob heavy comes to her apartment to rough her up for declining their offer to join forces, it is brutal. Not sexual, but brutal. I don’t know about you, but in most movies, if a man is beating up a woman, I always worry that the physical abuse is going to become sexual. That doesn’t happen here. 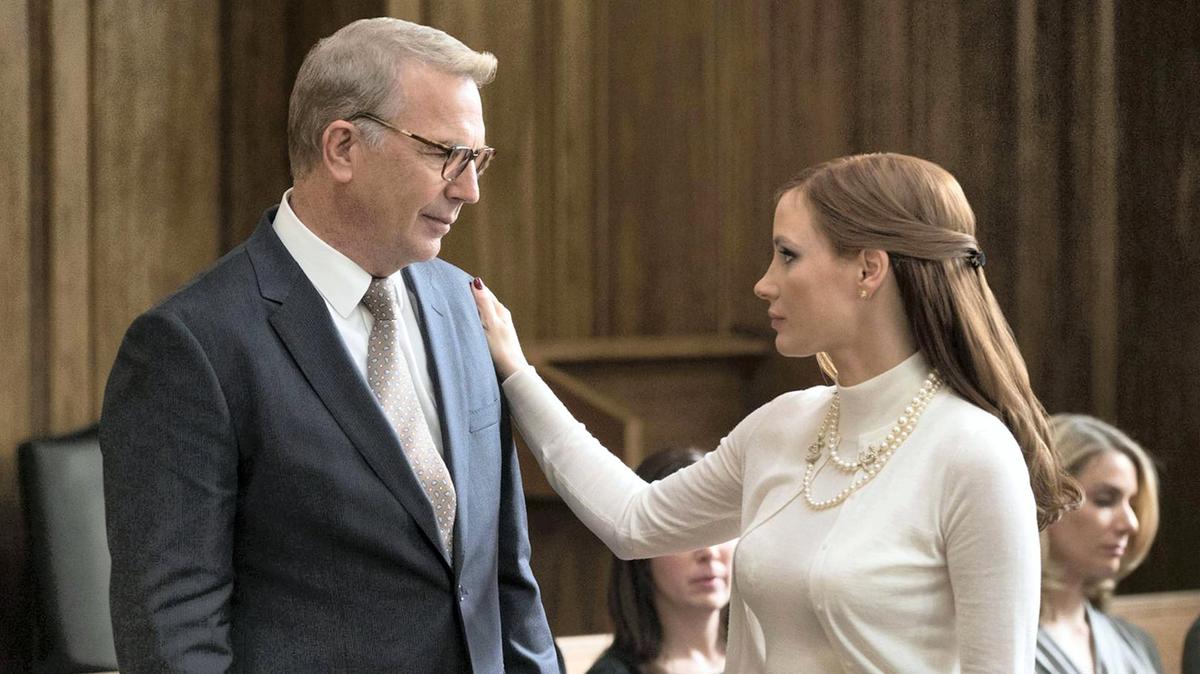 I’m not a particular fan of Kevin Costner. But I love him in this. He plays Bloom’s overly demanding father, and her relationship with him was prickly at best. When she’s young and training to be an Olympic skier, he’s her coach. It says everything about him when twelve-year-old Molly asks to go home from a long day on the ski slopes. She’s been out there training for hours. She’s cold and tired. He tells her that sure, they can go home. But first, she has to tell him another word for “tired”. She grits her teeth, says “weak”, and insists that she keep going. Maybe it’s that Costner is older now, and just crusty enough, that makes me like him more. Maybe it’s the fact that with Sorkin’s words in his mouth, he comes off as smart enough that he’s likable even when he isn’t particularly likable. Whatever, it works.

If Aaron Sorkin has anything working against him, it is that the bulk of the moviegoing audience is nowhere near as smart as he is. And that would work fine if he was willing to talk down to us at all. But he isn’t, and I’m grateful. Whether it is Toby Ziegler and Sam Seaborn referencing Pirates of Penzance in a casual conversation, or Molly Bloom shouting quotes from The Crucible in order to make a point, Sorkin refuses to compromise. And for this, I thank him, while at the same time understanding that this isn’t going to make his work as accessible to everyone as he might like. And really, I’ve heard nothing negative about Molly’s Game apart from “I haven’t gotten round to seeing it yet.”.

Get round to it. I’ve never played poker in my life, but I’ll borrow a term I learned from this movie—it’s the nuts. Call it.