Some shows start off great but end up sticking around too long. Whether they jump the shark, or just otherwise overstay their welcome, this is the theme of 25YL’s Cancelled Too Late series. This week Laura Stewart looks at the dreadful final season of House of Cards.

Well, here we are [addresses the audience], the final chapter of House of Cards. Did you really think we would get a satisfying ending after all the betrayal and backstabbing and ruthless, power-hungry political plotting? Well, yes, actually I did.

It was always going to be an interesting experience watching House of Cards without its main character, Francis Underwood. He had to be written out of the show speedily after Kevin Spacey was fired due to allegations of sexual assault. (Honestly, I’m not entirely sure where Kevin Spacey ends and Frank Underwood begins.) Yet I had high hopes for the finale. We knew that his wife Claire Hale would take her position as the first female president, and that promised so much. Instead, they delivered an absolutely abysmal final season.

Frank Underwood is not seen or heard this season. There’s a good reason for that; he’s dead. But it takes until the final hour for the audience to learn how he died. It’s a mystery with no meat, and the answer is given to us during a scene that tries to be Shakespearean but is instead too absurd to take seriously.

But before I get into that more thoroughly, I want to say that Robin Wright did a marvelous job on the final season of House of Cards. Her efforts to salvage these eight episodes of the show are nothing short of heroic but she never really stood a chance. Her character—and all the character arcs around her—were so terribly written it genuinely made me cringe at times. It’s Claire’s turn to break the fourth wall and talk to us directly now that she is in charge. But unlike Frank, she seems to be forced into doing this during almost every scene. It undermines her power and makes it feel like she needs far too much reassurance from us. When Frank addressed us, he got our attention and we were pulled into the drama of it, like he was our mentor, teaching us how to play the game. We felt that he trusted us, was letting us into his dirty secrets. With Claire, it felt too forced. 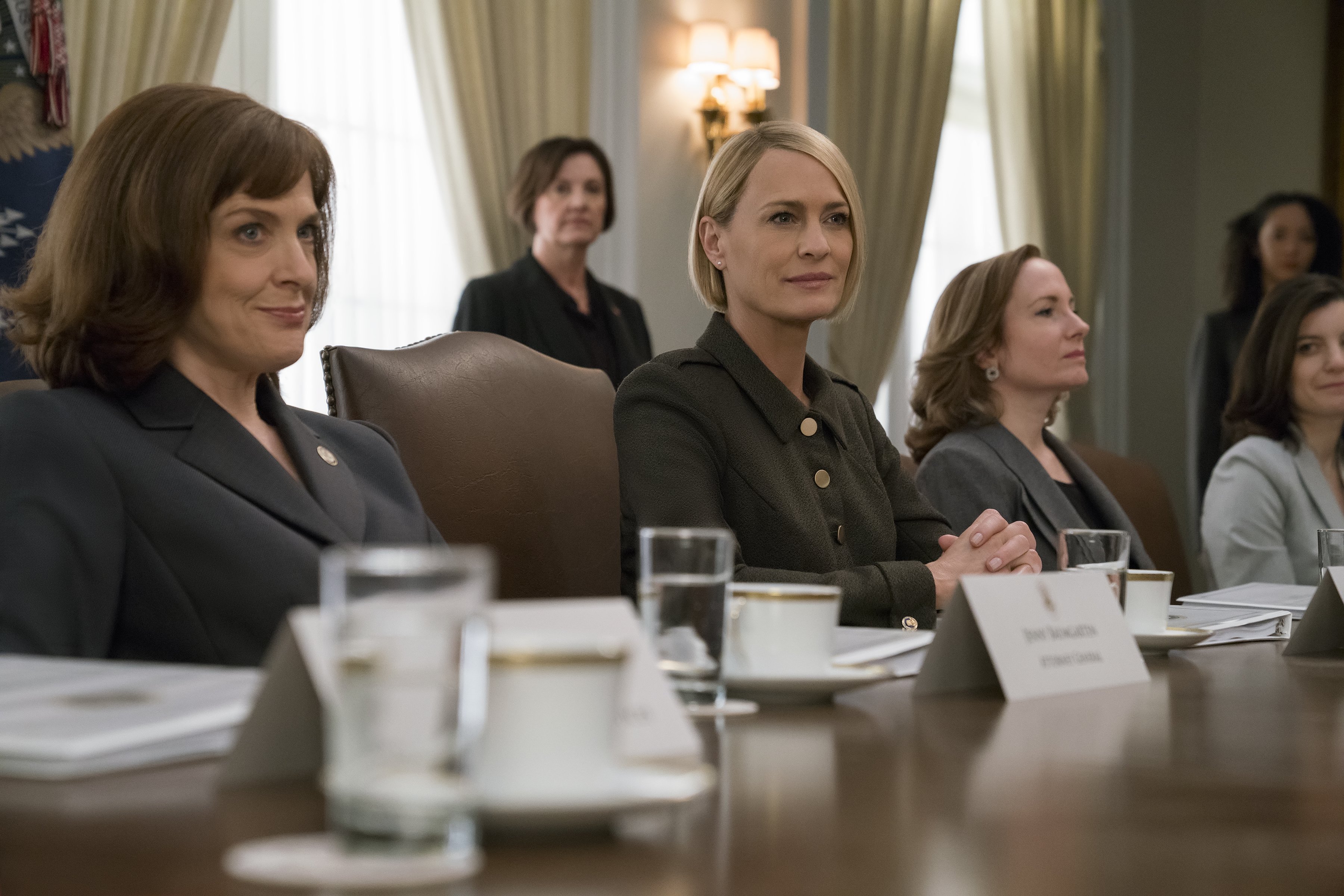 The show’s writers never got over Frank Underwood, his ghost haunts the season even though he’s deliberately never shown. House of Cards still wants to centre Frank, but Netflix doesn’t want Kevin Spacey onscreen in any shape or form. That means no painted portraits of the character in the White House and no inclusion of his voice-over despite the fact it figured so heavily in the plot.

It can’t have been easy for the writers, that’s for sure. But I still think they could have written a story that was far less over the top but would have mattered so much more. They had the opportunity to write Claire’s character free of her husband, who was her closest ally and also her greatest rival. Just what could she have achieved holding the highest power in the world? Instead, they introduced two brand new characters: a super-powerful brother and sister team played by Greg Kinnear and Diane Lane, who were written as if we’d known them all along. They had enormous wealth, making them more powerful than even the president. With that in mind, you’d think that they would have been featured before.

Adding major new characters at the end of the show was a risk that didn’t really pay off, firstly because by this point you don’t care about newcomers. If anything you want them to start whittling the cast numbers down. And, to be fair, they did—the bodies pile up in Season 6. But I had no energy left to become invested in these people knowing it was all ending in less than eight hours.

The plot that Claire hatches to cement her power in the face of this vague opposition is ridiculous even by House of Cards standards. Firstly, she takes the worst fears that misogynists have about a woman president by appearing hysterical and unable to control her emotions. Then she employs a Cabinet entirely made up of women, only to get rid of them when they actually want to do their jobs rather than backstab each other left, right, and centre. During the early seasons there was some glimmer of hope that Claire’s ruthless ways were in service of a larger purpose, but trying to spot any trace of a coherent agenda in Season 6 is fruitless. And just to add even more absurdity, Claire is pregnant, supposedly with Frank’s child, made from his sperm they had frozen back in Season 2 when they were going through IVF treatment. She did this in order to hold on to Frank’s fortune, which he had apparently left to right-hand-man Doug Stamper in his will. Ugh, please make this stop! 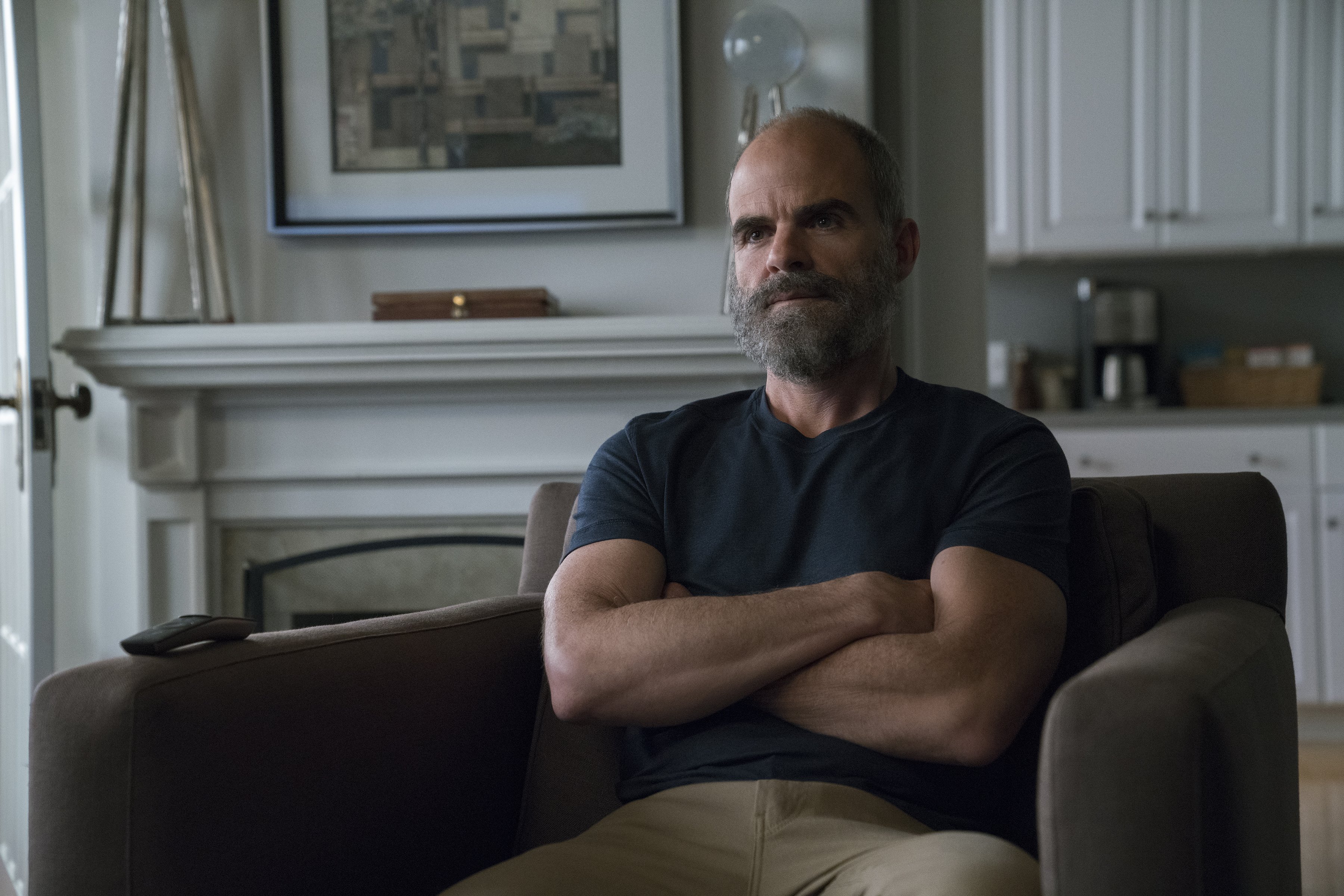 Stamper’s character becomes a caricature of itself. You can imagine just how chaotic he is now that his master is gone—he’s like a stray and rabid dog off the leash. He’s even grown a beard; it is that serious. Throughout Season 6, the question of how Frank died remains a mystery, but Doug finally reveals the answer right before his demise: Stamper killed Frank when Frank was on his way to kill Claire. “I had to protect the legacy from the man,” he says, in a line so meta that I was surprised everyone didn’t pause to look at the camera.

The confrontation represents the final season’s approach to Claire versus Doug into one scene. Everyone assumes they’re at odds until a brief conversation reveals they’re maybe on the same side, then Doug decides that, no, he’s angry with her. Then they’re back at odds. Like everything else in House of Cards’s last eight episodes, it repeats itself endlessly, making the ultimate reveal that it was Doug who killed Frank a bit exhausting—you’ll probably have figured it out long before Claire does. Stamper cuts Claire with a letter opener and the pair grapple. Claire stabs Stamper and then cuts off his air supply until he dies. In a callback to the beginning of the show, which opened with Frank explaining useful and useless pain when snapping the neck of an injured dog, Claire says to Stamper in his final moments, “There, no more pain.”

The show ends on a cliffhanger, but one we know won’t be resolved—at least not any time soon. Could Claire seriously get away with murder and remain president? The Secret Service has a lot to answer for, that’s for sure. The president of the United States of America just killed someone in the oval office. While pregnant. After being attacked herself. During a nuclear crisis. Of course, we know that this was not the intended end. This should have been a showdown between Claire and Frank, so whatever they did at this point was going to be disappointing. It just became so needlessly silly in the process. It’s a lackluster conclusion to a story that might have been a powerful way to frame a final season. And that’s to say nothing of the many times House of Cards steps close to giving Doug more control over the narrative—he even speaks directly to the camera at one point, a privilege that was previously reserved for Frank and Claire.

It’s a scrambled, incoherent, and confusing eight hours of television without any firm idea of how to bring this show to a close. Characters are brought back from the dead only to die again almost immediately. Major plotlines are brought in then never followed through. The decadent staging and hammed up performances create a kind of cultural discord—it’s hard to believe the rest of it is this bad when it often looks so good.

It is fair to say that the writing on the show had been nosediving for at least two seasons before the finale. It perhaps should have been brought to an end when Frank became president; there is only so long the same story can go back and fore after all. At any other time in history, we’d laugh at a show that presented a president with this many defections in their Cabinet or the idea that a leader would exaggerate a nuclear threat for political points, but these days both of those plotlines seemed almost clichéd. The American president meeting with a Russian leader to secretly cut deals for their mutual benefit? Meh, daily news.

Perhaps it is that we are desensitized to this now or we just hear and see so much of it on the news that we don’t want to hear about in our leisure time on top. House of Cards was great when it began; it was new and exciting, fresh and clean. The title and incidental music throughout the film perfectly fit its personality. By the end, Robin Wright had been stripped of her title of Female Boss and left once again, in the shadow of her husband.