This article is now available on Audio, written by Dawn Kiefer and read by Laura Stewart, exclusively for our Patreon supporters. For just $3 a month you will have access to our full library of Audio content, plus three new uploads every week. To sign up visit our Patreon page: https://www.patreon.com/25YL

Dawn Kiefer is the editor of a weekly Southwest Wisconsin newspaper. She is a lifelong film enthusiast, particularly of psychological horror and the macabre, as well as an avid collector of vintage fashion dolls and paper dolls. Her university studies had an emphasis in journalism and art history. This is her first of three articles on Ari Aster’s Midsommar.

Much has been written about the astonishing acting performance by Florence Pugh as protagonist Dani Ardor in the 2019 folk horror film Midsommar, and rightly so. Pugh portrays a character deeply wracked by grief while walking on eggshells to maintain a withering relationship with her longtime boyfriend, Christian Hughes (Jack Reynor).

However, the entire film consists of scenes during which Dani reacts to external stimuli.

I posit that the primary impetus of the film is Swedish foreign exchange student Pelle (Vilhelm Blomgren), who convinces a group of his university friends, which ultimately includes Dani, to accompany him to his rural home area in Sweden for their midsummer (spelled midsommar by Swedes) festival.

In addition to the film being categorized as folk horror, in keeping with such classics as the 1973 film The Wicker Man, director Ari Aster describes his film as “a dark fairy tale” and he, of course, is not wrong about that; after all, he WROTE it.

However, as of my second of four viewings of Midsommar, I got the notion that it’s also a love story. Subsequent viewings have deepened my conviction of that statement.

Each time I’ve viewed the film, I’ve noticed details I hadn’t previously. Additionally, after the first viewing, I have consistently kept my eyes on Pelle during scenes in which he’s featured. He exhibits nuanced behavior, gestures and facial expressions, which have convinced me that his character is in love with Dani. I believe that he and his “family” (actually a cult), the Hargas, have conspired to bring the American group, as well as a young British couple, to their village to fulfill its ceremonial needs during the midsommar festival. (I have laid out my hypothesis on the conspiracy in a separate essay, but for now, I will state my case for the story’s love angle.)

At the beginning of the film, the audience sees a five-panel mural that shows much of what will take place during the film. Until I belatedly found an image of this mural online, I didn’t realize how much information is actually contained in it. As the mural is only shown briefly onscreen, I noticed something different each time I saw the film. However, it wasn’t until the fourth viewing that I realized how prominently Pelle features in the mural.

The first of the mural’s five frames depicts the death of Dani’s family. The second frame depicts what I believe to be the love triangle between Christian, Dani and Pelle. In that second frame, Pelle is shown sitting on a tree branch with his sketchbook, while Christian and Dani walk below. In the third frame, Pelle plays the flute while he leads, pied piper-style, the four American visitors (Dani, Christian, Mark [Will Poulter] and Josh [William Jackson Harper]) to his village. In the fourth frame, the group and Pelle, with the flute held like a phallic symbol, enter the village. The fifth and final frame depicts young women dancing around a maypole. Many other details can be seen in these frames.

The first time the audience sees Pelle in the film is during the scene when he, Christian, Mark and Josh are at a restaurant. Pelle is looking down at something he’s reading or working on while the others are talking about Dani. When Mark says that Christian should find someone who’d want to have sex once in a while, Pelle abruptly looks up and intently follows the conversation.

The next times Pelle is shown are at the party when Dani learns about the proposed trip to Sweden and later at the guys’ apartment. (Either the four guys are all roommates or else one or more are visiting the apartment; it’s not clear.) During both of those scenes, Pelle is the only one who smiles at Dani and speaks to her in a friendly, welcoming manner. At the apartment, when the other three have left the room, he tells Dani he’s glad she’s coming along.

During the brief scene onboard the jet taking them to Sweden, when Dani exits the restroom and passes by where Pelle is seated, he anxiously watches her; apparently concerned about her well-being.

During the drive from the airport to Pelle’s village, Mark asks why Swedish women are so beautiful. Josh responds that Viking men dragged “the best babes” back with them. Taking this statement as part of Aster’s mythology for the film, it could be inferred that Pelle is “dragging back the best babe” he found while on his pilgrimage to the USA. 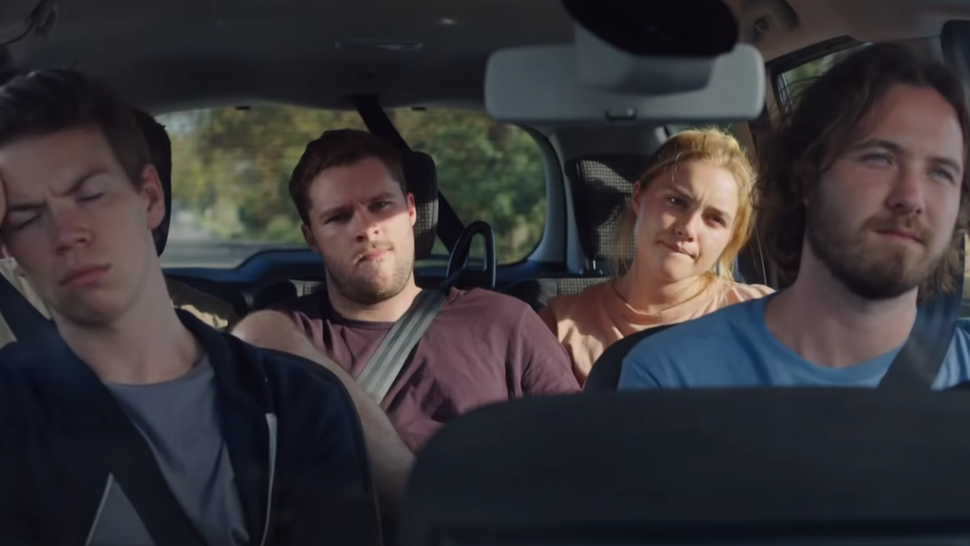 When Pelle and the four Americans reach his village, “family” member Odd affectionately greets Pelle and then says welcome to the Americans. However, to Dani alone, Odd says, “Welcome HOME.”

Having been told earlier by Dani that the group would arrive at his village on her birthday, Pelle surprises her with the gift of a lovely sketch he’s made of her. Pelle reminds Christian that it’s her birthday, but Christian’s feeble attempt to acknowledge that for Dani falls flat.

In scenes that follow it’s clear that Pelle keeps his eye on Dani. After the man and woman leap to their deaths from the Attestupa cliff, Christian nonchalantly lets Dani go off by herself to vent her anxiety and shock. But Pelle goes looking for her and finds her in the bunkhouse, where he tries to commiserate about their mutual loss of parents. He says that his parents “burned up in a fire,” although the circumstances are not explained. Pelle apologizes for letting her witness the Attestupa deaths and tells her that he is proud of his heritage and wanted to share it with friends he thought would appreciate it. He also tells her that he was the most excited for HER to come to his village. When Pelle holds and caresses her hand, she worries that Christian will walk in on them, but Pelle says that Christian is who he wants to talk with her about. Pelle asks her, “Do you feel held by him? Does he feel like home to you?” The camera cuts away as a look of uncertainty plays across her face.

In what I found to be an interesting display of body language, during an overhead shot of the bunkhouse interior, when everyone’s sleeping on separate cots, we see that Christian and Dani have their backs to one another, while Dani and Pelle are facing each other. I assert that the positioning of the characters is intentional and I wouldn’t be surprised if Pelle had placed a love rune under Dani’s bed, as Hargas “family” member Maja did with Christian’s. (I suspect that Josh was intended to see Maja do that, as a means to further enable the conspiracy that was underway.)

There are additional instances of Pelle’s apparent affection for Dani. These include a later scene of an intimate moment at the dining table when they’re seated next to one another. They briefly face each other, gazing at one another and smiling. A bit after that there’s a scene during which the audience sees that Pelle is drawing another sketch of her. After Dani is crowned May Queen, “family” members are shown hugging her or giving her a peck on the cheek. However, Pelle embraces both sides of her face and gives her a decidedly romantic lingering kiss on the lips. Later Pelle can briefly be seen in the background watching as Dani discovers Christian engaged in a mating ritual with Maja.

Shortly before Dani, as May Queen, is to choose the final sacrificial victim, one of the elders praises Pelle for bringing to the Hargas new blood (two of what ultimately proves to be three victims for the sacrificial fire) and for bringing their May Queen. Pelle has also been crowned, as some form of Green Man, I believe, and smiles happily when she is mentioned. I remind readers that, at the very end of the film, after the sacrificial victims have been consumed in flames, Dani smiles, too.

I would also like to point out that, twice, we see Dani hallucinating herself as rooted to the ground. I take that to mean that Dani feels that she’s “home.”

I can imagine some people reading the foregoing and not being convinced that the described behaviors add up to Pelle being in love with Dani. (Or, for that matter, that she’s in love with him.) I can only suggest that these persons see the movie again and consistently watch Pelle throughout and determine whether they see what I believe I did.