This article is now available on Audio, written by Alex Jimenez Nimmo and read by Audrie Roelf, exclusively for our Patreon supporters. For just $3 a month you will have access to our full library of Audio content, plus three new uploads every week. To sign up visit our Patreon page: https://www.patreon.com/25YL

2019 was the year of season finales. From Game of Thrones to Mr Robot, viewers around the globe are saying goodbye to some of the most gripping storylines in TV history. However, some series and some characters within them are easier to let go than others. This is definitely the case of Orange is the New Black and Nicky and Morello.

Orange is the New Black was the first show that I watched that was not only about queer women, but was made by queer creators. It was a show that presented a whole spectrum of relationships, and, like so many other viewers, I was exhilarated by the choice and array of characters. It also boasted razor-sharp writing and plot twists that were just as shocking as Game of Thrones deaths. The cast of characters were far from perfect—after all most are convicted criminals—but this grey area is what drew audiences to them. Ironically, the stories of women confined in prison became a means of escape for spectators, in this way the caged bird sings of freedom. 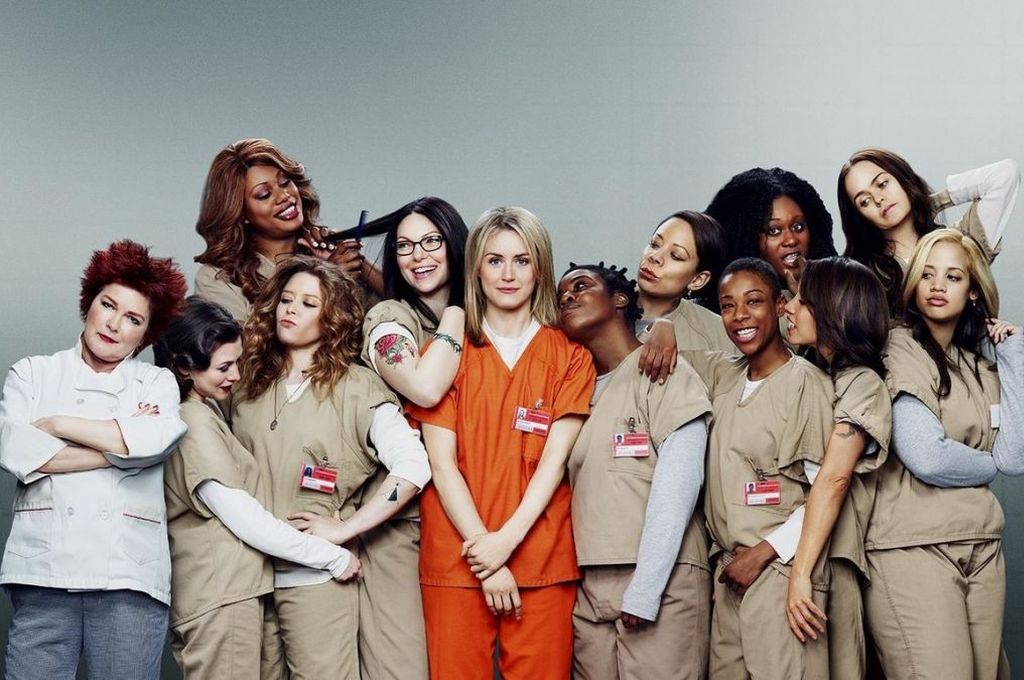 As there are so many different narratives in Orange is the New Black, it is hard not to have a soft spot for one in particular. Some fans found the on-again-off-again couple Piper and Alex compelling; others were charmed by Poussey and Taystee’s friendship. But this article will pay tribute to the bittersweet relationship between Nicky Nichols and Lorna Morello, played by the iconic Natasha Lyonne and Yael Stone, respectively. The two actors had a connection from the very start. Initially they both auditioned to play the opposite character: Lyonne had intended to portray Morello and Stone wanted to play Nicky. Their roles were subsequently swapped, but their mutual understanding remained intact for the rest of the series.

Nicky is a wise-cracking drug addict, who ended up at Litchfield Penitentiary for breaking and entering, along with possession of heroin. She’s an eternal optimist and her sardonic humour brought some much-needed comic relief to the inmates. As the series progressed, we discovered that Nicky’s confident swagger and prankster exterior enclosed an immensely relatable, vulnerable side, as well as a desire to be loved and form part of a family.

If Orange is the New Black demonstrates anything, it’s that families come in many different forms. Nicky creates her own community in prison and ends up finding a mother-figure in Red (Kate Mulgrew), the beloved feisty, no-nonsense Russian cook. In Red, Nicky has someone to look up to, a person who looks out for her but who can also tell her when she is acting up.

Lyonne’s beautifully nuanced performance served as a catalyst for reconciliation and healing, allowing her to channel her complicated past through Nicky, a feat that was more than admirable. Estranged from her family since she was 16, Lyonne has undergone drug and alcohol treatment and in 2012 was put through open-heart surgery; a series of events that is mirrored in Nicky’s plotline. Actor and character intersect, as Lyonne and Nicky literally share the same scars. For many, Nicky is a symbol of resistance, someone who stands up to the punches life can swing. Lyonne and Nicky have become such an integral part of Orange is the New Black, that she is justly nicknamed “The Queen”, illuminating audiences on the value of a self-made family and “unconditional love”.

Lorna Morello is also an advocate for love, but it is her all-consuming worship of the concept that ultimately leads to her downfall. Physically, Lorna is Nicky’s counterpoint. Whereas Nicky is slightly wild and untamed, Morello is refined and precise. She smuggles lipstick into prison because she has to see herself dolled up.

The reason why Morello is in prison is almost the plot of a Hollywood thriller. After bumping into Christopher, a man who is the spitting image of the men in the wedding catalogues Morello admires so ardently, she proceeds to stalk him and his girlfriend under the delusion that he wants to stay with her. Amongst her fellow inmates, Morello claims that Christopher is her fiancé, who is coming to pick her up as soon as she is released. The sad reality is that Christopher placed a restraining order on her and, after she concocted a homemade explosive under his car, she was immediately arrested.

Lorna and Nicky’s bond is like a seesaw; it’s seldom balanced. Nicky always sees the sweetness and potential kindness Morello can foster, but Morello is too far deep into her own fantasy to realize that her ideal love is right in front of her. To quote Nicky herself: “Straight girls…they’ll fuck you up every time”—a sentiment many queer women can wryly smile at.

Even though their romantic relationship is broken off in Season 1, Nicky has the heart to protect Morello and shield her from judging eyes. During Season 2, Morello acts upon her illusion and steals a van to pay Christopher an impromptu visit. When Christopher finds out that she broke into his home, he confronts her in front of Nicky, who nonetheless remains steadfast. She comforts Morello in a dirty staircase and tells her that even if everyone hates her, she will always be there to love her. After finishing the series, one almost wants to trap this scene in time, knowing that what happens next signals the making and breaking of the two prisoners.

In Season 3, Nicky is framed by a guard for possession of heroin and is sent down to Maximum Security, without even getting a chance to say goodbye to Morello. Here, Nicky is sent into a downwards spiral, ultimately relapsing into drug abuse. She eventually gets out, but has to gain the strength to conquer her addiction and also deal with the news that Morello is married. 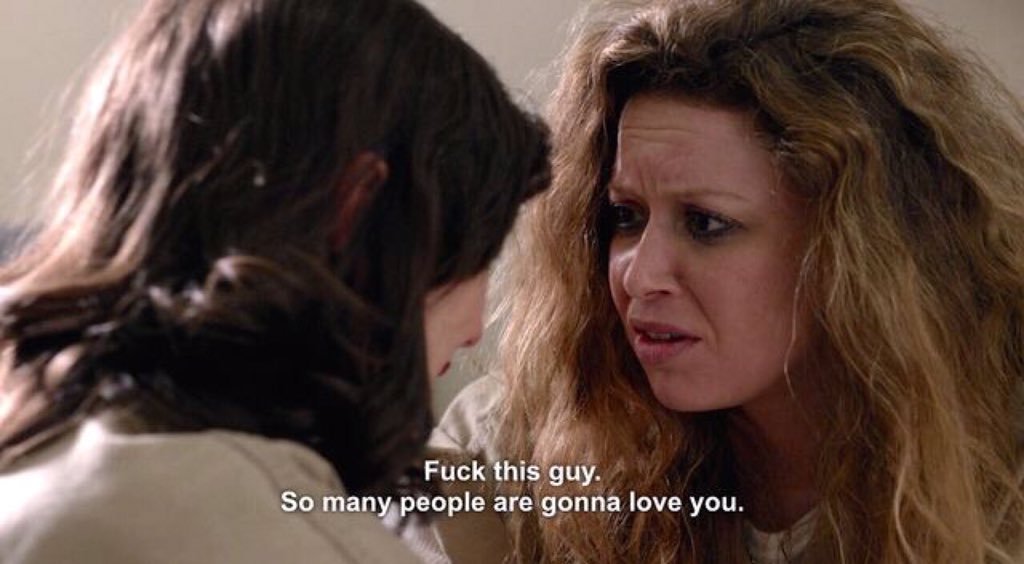 Orange is the New Black is known for its stunning use of music, and at the end of the second episode of Season 3 (“Bed Bugs and Beyond”) they play what I always think of as Nicky’s anthem. Martha Wainwright’s haunting “Bloody Mother Fucking Asshole” sums up Nicky’s feeling of frustration but also transmits the confidence she gains when in control of her own feelings. Poignantly, Wainwright wrote the track in response to her father’s neglect of her family, and the sense of abandonment she felt as a result can be linked directly to Nicky’s life. Moreover, Wainwright’s raspy, husky voice is surprisingly similar to Natasha Lyonne’s, so in our imagination, it could be Nicky singing this tune.

The chorus of the song asserts “I will not pretend, I will not put on a smile, I will not say I’m alright for you when all I wanted was to be good, to do everything in truth.” In the earliest seasons of Orange is the New Black, Nicky put on a smile for Morello and ended up hurting herself in the process. In Season 5, Morello got pregnant, making their interactions strictly platonic. And now, in Season 7, the tale of Nicky and Morello has come to a dramatic conclusion.

Seasons 3 to 5 saw Nicky in a tight spot, caught between her cold turkey and her still-romantic feelings for Morello. In contrast, Morello’s cup of fortune was overflowing, and it looked like she was finally realizing her dreams of marriage and pregnancy. Season 7 darkly reversed Nicky and Morello’s luck. Morello’s baby, Sterling, tragically dies and Morello, instead of accepting and moving on, once again finds safety in lies.

She creates a fake Instagram account, lifting stock images of babies and pretending he is still a happy, healthy infant. When her husband Vinnie and Nicky try to confront her with the harsh but necessary reality, Morello snaps and only enforces her imaginary story more. It is at this point that Nicky realizes that the toxic nature of their relationship has to come to an end. Lorna’s delusional nature is beyond her control and Nicky accepts that it is better for them both to move on in separate directions.

Morello’s descent into madness is one of the most mesmerizing performances on the show. Yael Stone treads a narrow line between vulnerable and unhinged, and even though she ends up attacking those around her, the viewer still can’t help but feel sorry for her.

One of the biggest shocks of the season was revealed in flashback form, where we see that Morello committed involuntary homicide by throwing a rock at a car she thought was driven by a man who was pursuing her. Morello becomes a modern-day Bertha Mason from Jane Eyre, a madwoman destroyed by love.

But Nicky not only loses Morello, she also has to let go of Red. In one of the most painful character developments of the show, Red is diagnosed with dementia, gradually forgetting who she is and those who surround her. We last see Red and Morello together, with Red cradling Morello like a baby.

Notwithstanding, Season 7 was Nicky’s road to redemption. Working in the kitchen in an immigration detention centre, Nicky falls in love with Shani, a mischievous girl from Egypt who complements Nicky’s sarcastic personality. This is the first time we got to see Nicky in a happy relationship, and it felt such a triumph. By being with Shani, Nicky’s caring and understanding nature came to the fore, as she aided her lover in overcoming the trauma of the genital mutilation inflicted in her home country. Painfully, the writers of this last season took Shani away from Nicky, as if either hadn’t suffered enough already.

Still, Nicky withstands these adversities and the last shot we see of her is absolutely beautiful. We see that she still works in the kitchen, dressed in the apron and hat that Red used to flaunt. She is also wearing lipstick, which could either be interpreted as another nod to Red, or as a tribute to Lorna and her bright red makeup. This is why Nicky Nichols is one of my all-time icons. She goes through hardship and strife, but she ends up rising to the occasion. To quote Martha Wainwright’s song once more, Nicky “[does] everything in truth”.

In 2012, textile artist Ruth Singer created a series of quilts called “Criminal Quilts”. It consists of 500 patchwork pieces with mugshots of 19th century prisoners of Stafford Prison in the United Kingdom. These up-close and personal photographs displayed in a sequence are extremely reminiscent of Orange is the New Black’s title sequence, in which cropped images of real-life female prisoners feature (including Piper Kerman, who wrote the memoir that inspired the series) appear. This parallel is not surprising, as Orange is the New Black is a tapestry of emotion, an interweaving of stories and lives and it is characters like Nicky and Morello that make up the fabric of television, stitching their way into viewer’s hearts.