Withnail and I packs a stronger emotional punch than most dramas, even though it is a comedy by definition. There are many clever decisions that were made to achieve this. The most shrewd of them is selecting the year that the narrative is set in: 1969. This is not something that seems particularly important on first viewing. However, after seeing the whole story and the characters’ arcs, it becomes one of the most important factors.

What’s happening around the world and in London—or Camden to be precise—reflects both Withnail and Marwood’s situation and friendship. On a side note, although never referred to by name, Marwood is the name appointed to him in the script. 1969 marks the end of the Swinging ‘60s. It also marked the end of the hippie movement that started with the Summer of Love in ‘67, peaked with Woodstock in the summer of ’69 and then came to an abrupt end at the Altamont Free Concert in December of that same year. Described as “Rock and Rolls all-time worst day,” organisers The Grateful Dead refused to take to the stage due to the extreme levels of violence at the festival. There was a stabbing, three accidental deaths, numerous car thefts, and extensive property damage.

Withnail and Marwood are certainly not hippies. They’re bohemian at best. However, the characteristics of the period, especially excess, suited their alcoholic, out-of-work-actor lifestyles perfectly. One of the tag lines for the film is:

“If you don’t remember the sixties, don’t worry… neither did they.”

Hippies are represented though, amazingly so by the wonderful Danny: “The purveyor of rare herbs and prescribed chemicals.” Although his ‘mechanisms gone” according to Marwood, Danny provides the social commentary for the story. The way he so succinctly puts it is:

“They’re selling hippie wigs in Woolworth’s, man. The greatest decade in the history of mankind is over.”

Everyone seems to know that it’s the end of an era. Withnail also reveals: “I’m thirty in a month and I’ve got a sole flapping off my shoe.” This film is becoming a symphony of endings. What Withnail and Marwood don’t know yet, is that it’s also very close to the end of their friendship in its current state as well. Like a couple having problems, they think that if they get away, it’ll sort all of them out. Consequently, they then hatch a hare-brained scheme to procure a cottage in the country from Withnail’s flamboyant Uncle Monty.

Now whether either is aware that this is a last hurrah of sorts is not addressed directly. Withnail does express feelings that they’re no longer in the same situation in terms of their careers before they depart. Marwood has had some promising auditions whereas Withnail is his own worst enemy. He refuses to accept any job that he feels is beneath him due to a high level of entitlement but isn’t getting the roles he desires. His solution to this conundrum is to carry on drinking excessively. Marwood is joining him for the moment but I believe that both feel a change is just over the horizon.

As they set off on their adventure we see stark imagery as buildings are being demolished with a wrecking ball to Jimi Hendrix’s “All Along the Watchtower.” This motif is practically saying outright that it may still be the ‘60s for the moment, but the period and everything it stood for is in the process of being torn down. Withnail puts it best: 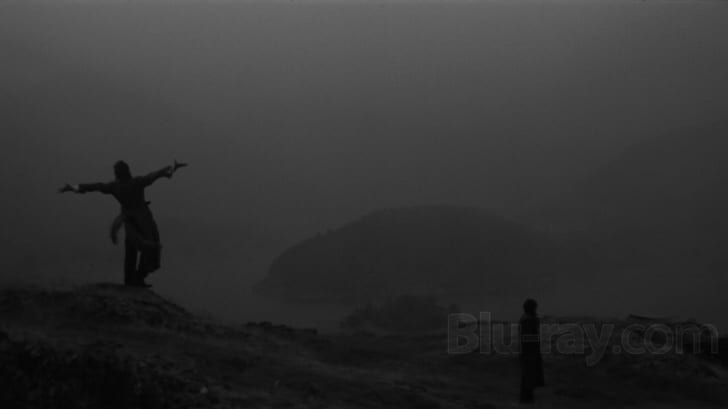 Despite this, there is a twinge of optimism as they hit the road. However, this is quickly dispelled before they even reach their destination in the Pennines. Withnail awakens after drinking to the point that he passed out to find that they’re lost, in torrential rain and it’s pitch black. To make matters worse, Withnail has a “bastard behind the eyes” and they haven’t brought any aspirin. You could say even this car journey is a sign of things to come.

Once they finally arrive at their destination, things progress from bad to worse. They now have to find resources such as food and firewood themselves in the middle of nowhere. The hilarity that ensues as they attempt to do this never fails to produce laughs, even after a dozen viewings. This is clearly the first time that our dynamic duo have had to venture out into the real world and fend for themselves. Something they’ll have to do more of as time goes on. Marwood, although struggling, shows more of a willingness and ability to adapt. This is some foreshadowing of where these characters end up by the close of the film.

Things escalate further when they get a surprise visit from Uncle Monty. It seems strange that he has appeared but his presence seems like a blessing at first. He has brought all sorts of provisions, everything they could need right down to seasoning. As they enjoy the first proper meal they’ve had in some time, Monty exclaims:

“Oh my boys, my boys, we are at the end of an age! We live in a land of weather forecasts and breakfasts that set in, shat on by Tories, shovelled up by Labour, and here we are, we three; perhaps the last island of beauty…in the world.”

Even the much older Monty knows the end is nigh. However, there’s something that Marwood is not aware of that slowly becomes apparent. Monty has come all this way with a hidden agenda for something specific…him. After fighting off his advances all day, things come to a head during the night. Monty invades Marwood’s bedroom and when he rejects him, he nearly forces himself on him! This is all because of lies that Withnail has told Monty to convince him to lend them the cottage. He told him that Marwood is an active “toilet trader” and that they had to get out of London because of trouble this caused with the police. The only way he finally manages to fend him off is by telling him that he and Withnail are in a relationship and he made up the lies because he’s ashamed of his homosexuality.

This has to be one of the most diabolically hilarious things that anyone has ever done to a person in the history of fiction. Marwood, understandably, does not see the funny side and expressly gives Withnail a tongue lashing for it. The next morning, Monty is gone and has left a sad, tender, apologetic letter. Marwood warns Withnail that there are consequences to such cruelty. There has definitely been a shift in the duo’s dynamic. Marwood, who had up to now been happy to be a sidekick of sorts, has reached his limit.

Withnail’s nihilistic superpowers are not something that he is going to encourage anymore. The blueprint of this kind of enabling relationship has been used in everything from Sherlock to Rick and Morty. The less dominant of the two always knows that there’s something inherently wrong with their partner. They either love them because of, or regardless of it but all are regularly pushed to their limits by it also. Marwood doesn’t express this outright but again, I think it’s something that’s palpable in the air.

After departing back to London, Withnail actually manages to make his situation far worse. This is impressive considering everything he’s already achieved. He’s arrested for drink-driving on the motorway. Now he can add prison to his laundry list of problems. Danny is waiting for them when they return home. They aren’t happy about this but he creates a giant joint for them dubbed the “Camberwell Carrot.” This cushions the blow when Danny produces a notice of eviction for them and Marwood reveals he got the big part he’d been hoping for. Withnail gives him an almost eerie congratulations. The final nail in Withnail’s self-made coffin is hammered in. He’s penniless, about to be evicted and possibly go to jail. Now he won’t even have any support as Marwood is moving on to bigger, better things.

“London is a country coming down from its trip. We are ninety-one days from the end of this decade and there’s gonna be a lot of refugees. They’ll be goin’ round this town shoutin’, “Bring out your dead.”

He seems completely oblivious to the fact that Withnail is one of these deaths. In the very next scene is a well-groomed Marwood, sporting a fresh, new haircut and preparing to leave. Withnail tries to persuade him to have one last drink, which he declines. It’s heartbreaking. Withnail concedes but says he’ll walk him to the station. Midway, in Regents Park, Marwood says he really doesn’t want him to walk with him any further. After a crushing goodbye, Withnail is left looking at the animals you used to be able to see in London Zoo from this park. He recites Hamlet’s soliloquy to them and then walks off in the pouring rain. The end of an era indeed.

There’s something particularly powerful about a parting like this, especially when you’ve grown to love the friendship the characters share. The difference being, that this is usually the trait of a long TV series. Withnail and I manages to achieve it in the space of a film. The realisation that things will never be the same again is one that we can all relate to. Nostalgia is so powerful and the fear of not knowing what’s next is frightening. A daunting combination.

Someone reading this article who hadn’t seen the film might think that it sounds like a terribly bleak affair. However, these dense themes of loss and change are balanced out with one of, if not the best comedy scripts ever written. It’s this intense combination of sharp wit and melancholy that makes the film so compelling.

Despite this, It does have one of the most hard-hitting endings of any film. Originally, the script had Withnail blowing his own brains out with a gun but this was thought to be a step too far. I think that ending could have worked but I’m glad they opted out of it. This film has enough endings in it already, we definitely don’t need any more.