Viewers’ hopes and expectations were shattered by the Euphoria season finale. Aghast audiences are left wondering if Rue has died from a drug overdose and whether Jules has escaped town forever. The main action of the season finale revolves around the high school’s winter formal dance, repeating a conceit from earlier episodes wherein one major event frames the central plot and allows the story to dive into individual characters’ stories. Unlike previous episodes, the finale lingers beyond this guiding premise and transitions to a release of “All For Us” by Labrinth with Zendaya on vocals. The reflective music video that accompanies the original song depicts Rue’s embrace of death through addiction. This unexpected punctuation to the season finale underscores the essentiality of Euphoria’s soundtrack to its entire aesthetic.

Aside from the uncertainty about Rue’s well-being, the season breaks off with other titillating cliffhangers. What will Maddy do with the explosive information she has uncovered about Nate’s father, Cal? Where next will Nate direct the velocity of his inconceivable rage? What will be Mouse’s reaction to the knowledge that Fezco is willing and able to commit violence to pay him on time? How will Cassie adapt to singlehood after getting an abortion? The show’s running conceit of a centralizing plot point used as a framing narrative encourages us to perceive that these characters’ stories are interconnected. Somehow, their stories inform one another. Let’s dive into these stories and review where Season 1 has left them off.

Cassie goes to the winter formal unaccompanied. She expresses relief that, for once, she is not in love. In Episode 7 we learned that Cassie has allowed herself to be shamed and exploited by her boyfriends. Her abandonment issues required her to tolerate mistreatment out of fear of being alone. We also learned that Cassie was pregnant with her boyfriend McKay’s child, but he was not interested in her keeping it. The experience of dealing with an unexpected pregnancy without her partner’s support has seemingly disillusioned Cassie from the refuge of male attention. She has pointedly decided to nurture her sense of independence.

We are given an austere, unflinching depiction of Cassie’s abortion. The raw scene viscerally depicts the pain and discomfort of undergoing a medical procedure to terminate a pregnancy. Contextualized within the reignited legal and political debates surrounding the issue of abortion, Euphoria’s blunt representation of the procedure validates the experience. During the abortion, we are brought into Cassie’s mind as she draws her awareness away from the clinic. We see her figure skating as she did in Episode 7 while she listens to Arcade Fire’s “My Body is a Cage.” We will watch in Season 2 to see how Cassie adapts to her newfound independence after coping from her abortion. Hopefully, she learns to validate her selfhood without relying on a romantic partner.

Another story that is emphasized throughout the season finale is Nate’s. Like Cassie, we first learn that Maddy is no longer dating Nate when we see them arriving separately to the winter formal. Only after we see Nate and Maddy glaring at each other while Nate dances with his new date do we learn how they were driven apart. In a flashback to a scene when they are alone in Nate’s bedroom, we see them fight. Nate is unable to feel sexually attracted to Maddy, and he attributes this to the rumors that have been spreading about him. The rumors are about the pictures of other dudes’ dicks that Maddy found on his phone. This conversation sparks an intense fight, and Nate snaps. He becomes physically threatening and violent.

Maddy leaves the house, but before she leaves, she spies a mysterious disc tucked in one of Nate’s books. Rightly assuming she will find more sensitive information about Nate on the disc, she snags it. Remember the creepy disc collection that Cal, Nate’s dad, has kept since Nate’s childhood that contains videos of him hooking up young men and trans women in hotels? The one that Nate casually peruses? Yeah, this would be a disc from that collection. We later see Maddy stunned with her mouth agape after she watches the improbable video, and we’re left wondering how she will use the information she uncovered. 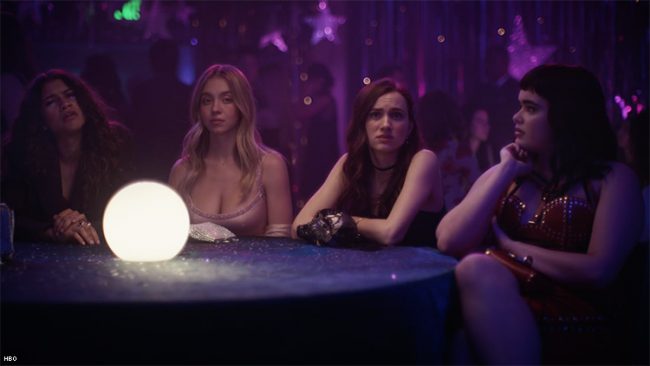 Later in the episode, we see Nate’s detached composure dissipate entirely. He has a mental breakdown that is provoked by a confrontation with his father. We are clued into the significance of this scene throughout the episode. Leading up to it, the story intermittently cuts to Nate’s football game before the fight with his father. Later, Cal disapprovingly criticizes Nate’s game strategy. Nate wordlessly becomes physically confrontational, but Cal easily overpowers his son. We hear Nate call his father a f*ggot. A moment later, Nate sees himself struggling beneath his father in the bedroom mirror and is reminded of watching his father perform sexual acts with queer boys and trans girls. His deep perturbance surfaces and he begins to sob, but his anguish quickly gives way to unbridled rage.

Back at the winter formal, Rue confronts Nate. Early in the finale, Jules confirms Rue’s suspicions about Nate’s threatening involvement with Jules. Rue keeps Nate in her sight during the entire dance, and when he steps outside, she takes her chance to follow him. In their terse interaction, Rue implies that she knows Nate is responsible for Fezco’s house raid and for blackmailing Jules. She threatens to tarnish Nate’s family reputation by reporting Cal for (statutorily) raping Jules. Nate, barely concealing his disconcertion, hurts Rue in kind by insinuating that Jules will leave her behind after high school. Comparatively, Nate’s petty remarks are insubstantial. Nonetheless, he expertly applies pressure to Rue’s deepest insecurity. His proverbial twist of the knife foretells what is to come later in the finale.

Euphoria’s season finale broke with the show’s previous formula of beginning each episode with a character’s childhood background narrated by Rue. In this episode, we begin with Rue narrating her own visit to the hospital after contracting a kidney infection in Episode 7. Rue states in her voiceover that hospitals are the only places where she doesn’t have anxiety. We are reminded, not for the last time, of Rue’s identification with her father, who died from a terminal illness.

Jules visits Rue in the hospital. When Jules expresses concern that Rue ended up extremely depressed and hospitalized because Jules left town, Rue reassures her that she is not the cause. Rue’s ready acknowledgment that Jules is not responsible for her own mental state contradicts impressions given earlier in the season that Rue was becoming psychologically dependent on Jules. The finale later demonstrates, however, that Jules still figures prominently in incentivizing Rue to stay sober.

Jules dresses Rue and puts makeup on her for the winter formal. She also opens up to Rue about her experience in the city. Jules doesn’t hold back in telling Rue about her sexual experience with Anna, and she makes it clear that she would like to draw Rue into the environment of the city. She also implicitly tells Rue that she would like to share sexually intimate experiences with Rue as she did with Anna. All in all, Rue and Jules are clearly—finally—a “thing” when they enter the winter formal together. Rue is not bothered by Jules’ experience with another girl, at first. But, she becomes jealous later when Jules withdraws to text with Anna.

After Rue confronts Nate, Jules approaches her outside. Rue tries to identify the feelings of insecurity and inadequacy that Nate has brought up in her. In an almost offhand way, Rue suggests that they pack their bags and leave town together that night. Jules agrees, and the two ecstatically ride off on their bikes and into the unknown. When they finally get to the station, however, Rue has changed her mind. Jules tries to draw Rue onto the train, but Rue finds herself unable to board. She is unwilling to retraumatize her mother and sister by running away. Jules doesn’t change her mind, though, and the train whisks her away from the town and from Rue. 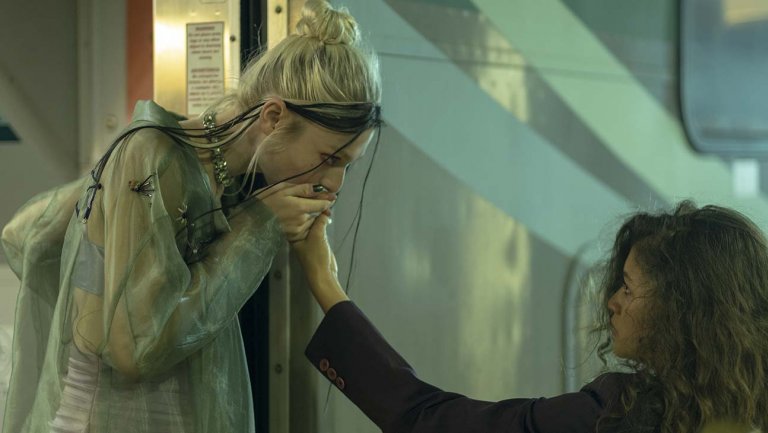 Rue is thrust into an unstable mindset after feeling abandoned by Jules. At this point in the episode, the sequence of events becomes more undefinable than ever as memories whirl and blend with the present. In this moment of loss, Rue is reminded of her father’s death. We see Rue the day her father’s body was removed from their home, and it is revealed that the red hoodie she frequently wears was one she took from his room that day. Ultimately, we see Rue succumb to her addiction and snort a line. Cue the “All For Us” music video and the end of the season. 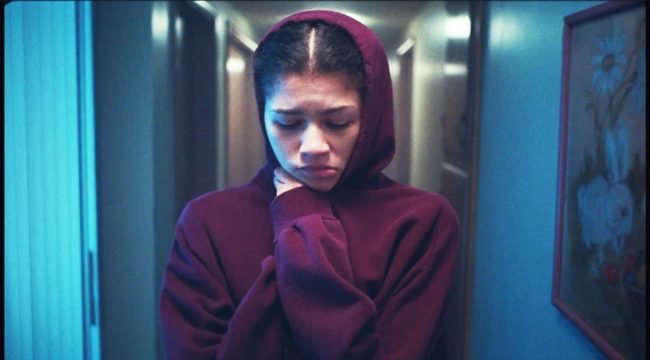 Many viewers speculate that the season ends with Rue’s relapse and overdose. This theory is plausible because there are many allusions to death throughout the sequence. It also confirms earlier speculations that Rue must be dead because she is an omniscient narrator. I do not interpret the season finale as depicting Rue’s literal death but rather her close bond to death through addiction. Through her substance abuse, Rue consciously flirts with death, and death is the only thing that can bring her close to her father again.

At the beginning of the “All For Us” scene, Rue is grotesquely animated from lying still on her bed after getting high. In jerky, “Thriller”-like movements, Rue crashes down the hallway as a disorienting camera style mimics her state of consciousness. She approaches her sister Gia and her mother Leslie, but they do not appear to notice her. Suddenly, she is wrenched from that scene by her father, who is there and who can see her. This is one major element that leads people to conclude that Rue has died.

Next, we see Rue out in the street with a chorus of maroon-robed dancers. Chillingly, the chorus’s robes echo the red hoodie that Rue took from her father’s deathbed, emphasizing the connection between drugs, death, and her father. Again, the choreography alludes to Michael Jackson’s “Thriller”—but here, the ghoulish chorus line seizes Rue’s body. Rue, corpse-like, is raised and tossed through the air. At the end of the sequence, the dancers form a human pile that Rue wearily climbs atop as their hands reach out to her.

The final lyrics of “All For Us” clue us into the continuity of Rue’s consciousness and her sense of futurity. No, I do not believe that Rue is dead. When Season 2 picks up, we will find out how deeply Rue has plunged into relapse and when she will see Jules again. In the meantime, check out this New York Times list of selected readings on Euphoria.

I hope one of you come back to remind me of who I was when I go disappear into that good night.