Yesterday’s news of The OA being canceled after just two seasons not only still hurts, but is deeply puzzling. How could one of the most intriguing and exciting shows in the past decade have been axed? Especially given how much more story was left to be told. The collective emotion from The OA community since the news is really something special to behold, but is everything all that it seems?

Almost immediately after the news broke out fans had started up a petition on Change.org calling for the show to be saved.

The Netflix Original series ran for two seasons with a total of 16 episodes. The show has received great critical acclaim, also reaching an 80+ score on Rotten Tomatoes for both seasons. During its run the OA has generated a large and dedicated fanbase and what some might call a cult following online; a subreddit with over 40,000 subscribers, countless theories, fan-video’s, fan-art, flashmobs and much more.

To all of its fans around the world The OA means way more than all those profit-driven executives at Netflix could ever imagine. This marvel of unique storytelling that has touched and connected so many can not remain unfinished. Therefore, we collectively pledge for The OA to be given a chance to finish her story… because we were all listening, so very closely.

I honestly couldn’t have put it better myself. A fandom without drama is a rare thing to come across and this show’s fan community is a joy to be a part of. It’s also rare for a single show to speak to so many different people on so many levels. Just like Prairie shares her story with her followers in Season 1, people in the community became inspired to share theirs. We, the viewers, became The OA in a way and began talking to one another and sharing our stories, which is what the community was based on.

We all have a character in the show we can relate to and we’ve all had life experiences that have defined the people that we are. The OA gave us the courage and the voice to share these experiences. But it isn’t only the story that’s told to us, as the movements do something to. Remember when a flash-mob performed the five moments outside of Trump Tower as a way of spreading light and love to the world? It was (and still is) both breathtaking and emotional to watch. It was an inspiring performance and is just another reason why The OA’s message was is so important. At the time of writing this article, the petition has gathered almost 30,000 signatures in this short space of time. 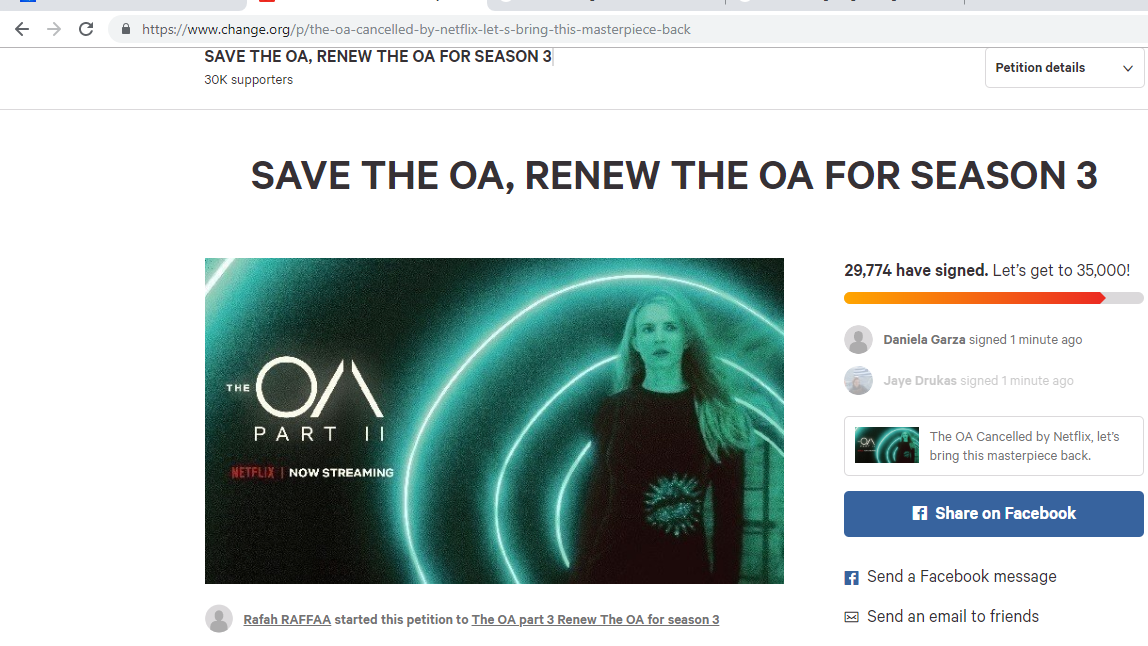 Something that was repeatedly being said in the community was that numerous people had reached out to Netflix for some answers…but couldn’t get any. This felt a little too strange to me, so I decided to reach out to Netflix on behalf of 25 Years Later and see if I could learn anything.

Calling their customer service department I explained who I was, who I represented, and asked if they could confirm the cancellation of our beloved show. I was told that they didn’t have any information on the cancellation but would take a note that I had took the time to enquire.

Perhaps they’re tired of people making the same inquiry but it felt like she was trying to get me off the phone. I didn’t want to accept that as a response so pressed her for a little more information.

I told her I assumed that as she worked for Netflix that surely she would have access to that kind of information or could at least make some inquiries on my behalf about it. She was again reluctant and told me that there wasn’t any information at all so she couldn’t confirm anything to me. They attempted to end the call again so I asked one last question. I asked that if they weren’t able to confirm it’s cancellation would this mean that it could potentially be a rumor with no truth to it at all. Her response was interesting.

“If the cancellation announcement is from one of our official social media accounts then we can assume the information is 100% accurate. But for now, we don’t have the information to confirm it”

I may be just clutching at straws with wishful thinking but why can’t the employees at Netflix confirm something that their bosses have done? Especially when its something that’s very public knowledge at this stage. The wording of their responses seems a little off and their refusal to confirm anything just keeps stoking the flames of speculation. What if there is some truth in the claims that it’s all a stunt? It’s actually still yet to be confirmed on any of Netflix’s social media accounts.

When Season 2 ended, we were blown away by everything that had happened. As BBA (Phyllis Smith) and the students performed the movements in one dimension, the crazy robots performed it in another and a portal opened. As Prairie/Nina jumped through it, the unthinkable happened. They jumped into a strange version of our own dimension. The OA is portrayed by an actress named Brit and they’re literally filming the show on our screens.

One of the main mysteries of the second season was the house on Nob Hill, which almost became a character itself. Inside the many rooms of puzzles was a poem by T.S. Eliot etched into the walls.

“We shall not cease from exploration,

And the end of all our exploring,

Will be to arrive where we started,

And know the place for the first time.”

By jumping into a reality filled with actors filming a TV series (presumably for Netflix) the characters have actually arrived where it all started. It started as TV series in our reality, so have we now become part of the show ourselves?

Speculation is rife that eventually this cancellation will be revealed as a stunt and will be a huge part of the story in Part 3. Maybe in this reality, they canceled the show due to Brit’s injuries that she sustained in the finale. Netflix has yet to provide us with an explanation so maybe the show is deemed too unsafe to create now. Five is a key number throughout the show so it’s interesting the show was “canceled” on August 5th.

Prairie needed people to listen to her story and achieve her goal of jumping to a different reality to find her lover Homer (Emory Cohen). What if we are now her followers? We’ve listened to her story just like BBA and the students did and we’ve been there every step of her journey. Their quest in Season 2 was to find a way to save The OA and now we’re having to do the same. By creating these petitions and reaching out to Netflix we’re doing everything we can to save her.

It’s Brit Marling’s birthday today and even if this really is the end of The OA’s journey, the biggest present we can give her is to carry on showing her just how much this story means to us. We might be doing all of this for nothing and we might be just unwilling to accept the facts that are in front of us. But BBA and her boys never gave up on The OA, so why should we? What started as a YouTube video in season one of The OA asking for help has now become a trending hashtag that we cannot ignore.

More From: The OA