Psychedelics, music, love, nature and freedom. These are words that come to mind when we think of the summer of 1969. In a time of darkness, this particular summer represented a fight for freedom and a celebration of people and love in the world. The sound of Grateful Dead represents to me everything I imagine the joys of 1969 to be, and for this series celebrating the events of the summer, it couldn’t be done right without a celebration of Grateful Dead, and their third album Aoxomoxoa.

Aoxomoxoa was the band’s addition to the acid trip that was the summer of ’69. It was released on June 20th as the summer began, and fans recognise this time for the Dead as a very experimental period. I’m so grateful to have this album in my life, and it’s one of the reasons every band should experiment with their music. It’s an example of the pure gold that can come from expanding and creating music that is like nothing ever done before. It could be stated that every album the band produced was an experiment but this one stands out to me, and that is partially because of the image it creates of that particular wonderful time period.

The album cover is a classic picture even 50 years later, and portrays a theme of life and death and rebirth. It is said that the bottom of the image represents death, with a skull and crossbones, and leaves falling off trees, and roots that symbolise rebirth of plants after death. And the sun above is also an image of an egg being fertilised, which of course symbolises birth. Parts of the imagery can also be interpreted as sexual organs, that relate to the fertilisation of the egg.

The sun on the image almost appears to be frying the brain of the person behind this skull, but I also like to link this to life and see it as the sun sending energy into the crown chakra, which often represents spirituality. Like the lyrics of the music, the imagery of the album cover is open to interpretation in multiple ways. 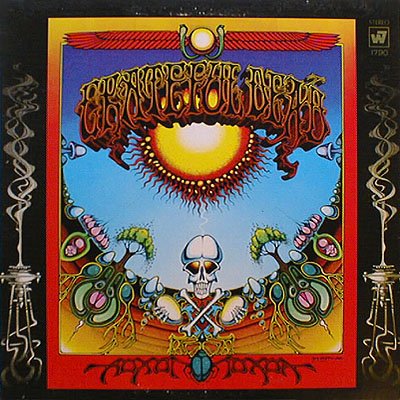 Each of the 8 tracks on the Aoxomoxoa album is a story that wants to be unravelled. How you choose to visualise the lyrics are up to you as the listener, leaving the context behind the lyrics completely open to interpretation. That is something Deadheads love to do, to analyse and imagine. Imagery is a main characteristic of the Dead’s lyrics. Each line creates a picture. For example, in the first track of the album ‘St Stephen’ Jerry sings:

“Lady finger, dipped in moonlight
Writing, ‘What for?’, across the morning sky
Sunlight splatters, dawn with answer
Darkness shrugs and bids the day goodbye”

Now this has been visualised hundreds of ways, anyone who ever lay on their floor staring at the ceiling listening to ‘St Stephen’ on their record player visualising every word in an attempt to put the story together correctly like I do will have their own version. This lyric in my head is a transition from day to night, which may seem incredibly simple, but not everyone will hear it that way. I picture a beautiful woman dancing at sunset, twirling and skipping along the grass as the darkness follows her, taking over the sky as she travels further along the scene until darkness takes over completely and night hits. It’s a magical space in my mind that I happily re-visit with every listen of ‘St Stephen.’

A favourite of mine from the album is the mysterious ‘Rosemary.’ I love this song because there almost feels like there is no real answer to the story. Perhaps when writing, Robert Hunter didn’t fully know the true meaning of this story either.

The she/her referred to in the lyrics could be a description of almost anything. Were they perhaps referring to the garden as a ‘she’? Or was there a woman in this garden? The ‘she’ could have been an object or a creature in the garden, or the garden could have been a metaphor for something else entirely. While I do picture an enclosed garden when contemplating the lyrics, for the song to be a metaphor about life itself would also be fitting. A garden that is blooming with the presence of life in the form of whatever she/her may be, that withers and decays as life is taken away, and is no longer accessible without the source of life. This brings to mind the image of the human body, full of movement and thoughts and ideas and breath during life, but left empty and decaying when it’s over. This isn’t such a beautiful metaphor, but would be fitting with the theme of Aoxomoxoa’s album cover. 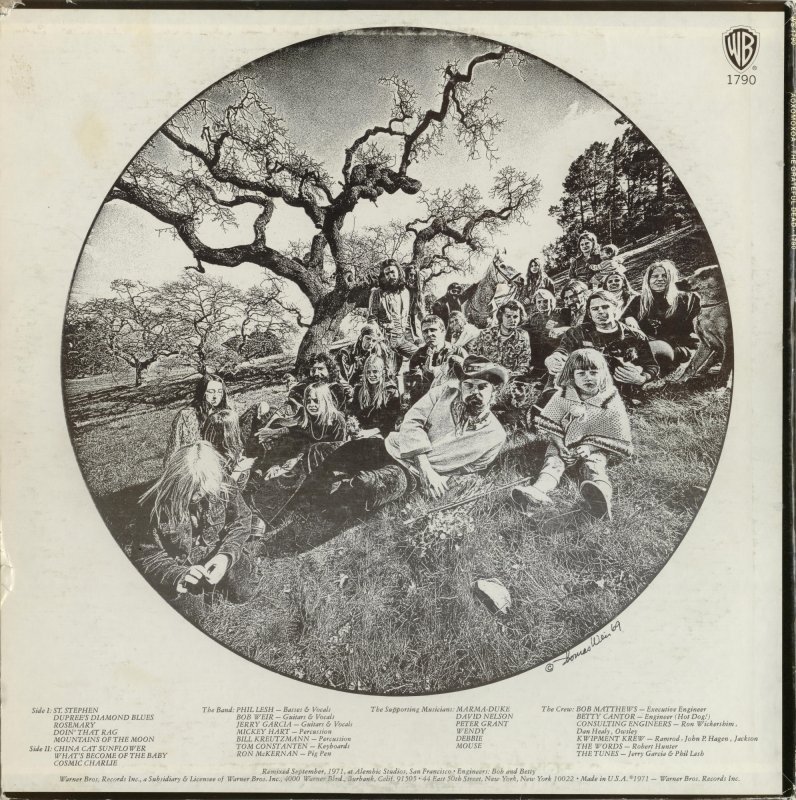 I have noticed that multiple songs on this album are interpreted as religious stories, and ‘Rosemary’ is sometimes seen as the Garden of Eden, that life (humans) were banished from for sin, and nobody may return here since they were unable to stay. As someone who holds no belief in this religion I have never interpreted it this way, but it does work.

‘China Cat Sunflower’ is another popular name from Aoxomoxoa, and is a song that takes you on a trip like no other. In his book A Box of Rain, Robert Hunter who wrote the lyrics for this album states that:

“I think the germ of ‘China Cat Sunflower’ came in Mexico, on Lake Chapala. I don’t think any of the words came, exactly-the rhythms came. I had a cat sitting on my belly, and was in a rather hypersensitive state, and I followed this cat out to—I believe it was Neptune—and there were rainbows across Neptune, and cats marching across the rainbow. This cat took me in all these cat places; there’s some essence of that in the song.”

The psychedelic influence on the music of Grateful Dead is more apparent than ever before here, and it why we can’t make complete sense by putting the story together, we can only lay back and enjoy the various visuals obtained from ‘China Cat Sunflower.’

This entire album centres around colour, spirituality, experimentalism, and psychedelics, and this fit in with the atmosphere of the summer of ’69 in an intense way. Being the year of Woodstock, and the celebration of the first moon landing, this is the music of freedom that we wanted to party to at that time. Aoxomoxoa, and the Grateful Dead are the sound of the summer of ’69.