The kind of long narrative of serialized TV can be wonderfully immersive, but here at 25YL we also recognize the value of a great standalone episode. Join us as we explore horror and sci-fi anthologies old and new, along with some other standout episodes of shows you love. This week, Will Johnson examines another episode of The Twilight Zone.

“This is Maple Street on a late Saturday afternoon. Maple Street in the last calm and reflective moment—before the monsters came.”

Twisted serendipity was at play when, months ago, I chose “The Monsters Are Due On Maple Street” for my second look into the original Twilight Zone series. This season one classic, premiering in March of 1960, has not only inspired scores of imitators in the fictional world but has begun to push on artistic boundaries and imitate life, almost six decades later.

I write this as a constituent of the United States of America, a country which, at the time of this writing (and hopefully not when you are reading this two, six, or seventy years later), is bathed in harmful rhetoric, pervasive paranoia, and the inevitable persistence of violence. Hardly a week goes by in the US without devastatingly hurtful attacks on itself, the air barely clear from gunsmoke before the ear-deafening clap-clap-clap of semi-automatic thunder begins again.

The US of 1960, less than a decade removed from witch hunts, mythical fifth columns, anddevastating wars abroad—not to mention a “separate but equal” social structure between whites and blacks (or any other ethnicity, to be honest)—was moving into societal changes that would disrupt the status quo of “normalcy”, i.e. an economically strong, pervasively white suburbia. As the US, on its advertised surface, punctuated by Mad Men and idealist politicians, began to desire “Camelot” and began the gestation of the concept of “The Great Society”, social changes, involving segregation, integration, political movements, technological revolutions, and personal expression, would challenge this squeaky clean image and cause tension within the white populace.

Rod Serling, the creator, writer, and narrator of The Twilight Zone, knew of history and he could sense the future, and while The Twilight Zone as a whole served as a sometimes uncomfortable then-contemporary look at its ’50s/’60s audience, the concepts presented transcend time, becoming not only timeless but immortal. So, oddly, rewatching “The Monsters Are Due On Maple Street” now, trapped in this current hellscape we call America, paradoxically became both nostalgic and contemporary. I felt like with the exception of a costume change here or there and, perhaps, the inclusion of a smartphone, none of the episode would have to change at all to remain relevant and powerful.

“Maple Street” opens on this oft-advertised idyllic suburbia: large, modern homes with vehicles(some new, some old)  in driveways or at their assigned curbs, an ice cream salesman ready to sell his wares to the children chasing each other on what looks like a warm, summer day. The whole neighborhood is out enjoying each other’s company, all smiles and “how do ya dos.” But to interrupt this apparent serenity is a large object off-screen that buzzes by, bright and loud, momentarily dazing its audience.

After this mysterious objects seemingly flies off, the crowd begins to debate what it could have been, while power simultaneously goes off on the block: phone lines are dead, lights won’t turn on, radios become silent…even cars won’t start. Older gentleman Pete Van Horn (Ben Erway) advises everyone he’s going to take a look at some of the other neighborhoods nearby to see if they are having the same problems. Steve Brand (Claude Akins), the de facto leader of the community, wants to investigate further and go into town. However, young Tommy (John Handzlik) warns him, and any others who accompany Steve, not to go into town because that’s what “they” want.

When the neighborhood, already a bit anxious from the flying spectacle and the supplementary loss of power, want to know who “they” is, Tommy explains it is spacemen who are using the power outage as a tool for invasion. Though the neighborhood laughs off the suggestion at first, seeing as Tommy read the scenario in a comic book, one by one they begin to think it might be possible as the power continues to stay off and the sky gets darker. Tommy’s insinuation that the invading aliens would look like a normal American couple with two kids gets each progressively paranoid neighbor to see the evil nature in each nearby human’s behavior.

When a well-known neighbor, Les Goodman (Barry Atwater), becomes the only one with a car that starts on the block, people wonder why he goes outside at night and looks up at the stars. The awkward and stiff Les bristles at the scrutiny, insisting he has insomnia, which his wife defends. When Brand comes to the neighbor’s defense, the others then turn on him, wondering why Steve builds his own radio in his basement, all secretive-like. Is it for illegal activities? Spying? Communicating with the aliens?!

As night hits and the power remains off, everyone is camped out on their yard watching their nearby neighbor, lobbing accusations of being an imposter and arming themselves, prepared to defend their home from the true enemy. When the frenzied crowd turns on the frothing ring leader of the escalating witch hunt, Charlie (Jack Weston)—whose house suddenly becomes the only one with power—they hit him with rocks and accuse him of being a traitor. Before he can be killed, however, he distracts the crowd by pointing to a man slowly approaching the neighborhood from further down the street. Bathed in darkness from the lack of light and power, the man’s slow gait only increases the block’s anxiety.

Charlie, out to prove he isn’t a monster, shoots the “invader” dead. Upon inspecting the body, however, they discover it was just Pete Van Horn, returning from his own investigations. As the crowd continues to argue with one another and debate the legitimacy of Peter’s death (was it murder, was it defense, was it confusion?), the scene changes to a faraway mountain where two aliens discuss what is happening. The elder alien explains to his junior that all it takes is a small push in one direction, a loss of the expected creature comforts, like technology, and the humans will kill themselves. An invasion would thus be bloodless for the aliens, who can simply play vulture when the world goes mad.

The tools of conquest do not necessarily come with bombs and explosions and fallout. There are weapons that are simply thoughts, attitudes, prejudices…to be found only in the minds of men. For the record, prejudices can kill…and suspicion can destroy…and the thoughtless, frightened search for a scapegoat has a fallout all of its own—for the children and the children yet unborn. And the pity of it is that these things cannot be confined to the Twilight Zone. 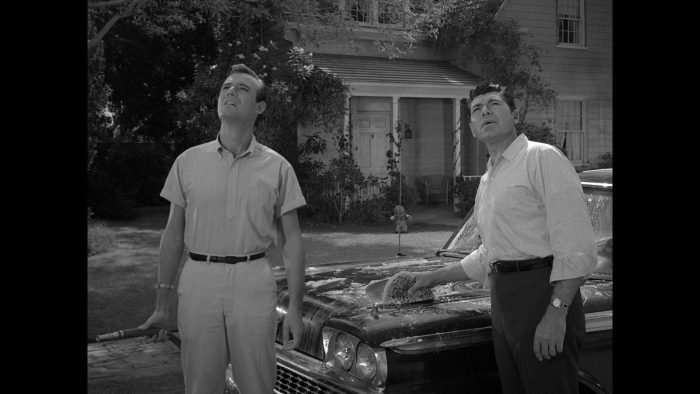 March of 1960? Or August of 2019? Upon hearing Serling’s final narration, I couldn’t help but wonder if time had folded in on itself and simply repeated. The United States currently lives in a scapegoat culture, full of social vigilantes looking to harass and perceive The Other as monsters, whose presence will destroy paradise. Be it black men suffering the indignity of increased scrutiny by an ever-increasingly weaponized police force, simply for driving, walking, and thinking while black, or Hispanics, without evidence, accused of being illegal, being slaughtered in an every-day superstore by a lunatic spurred on by a Presidentially endorsed warning of “invasion”, the Monsters are not due on Main Street, USA, but are, indeed, already here.

Each generation loves to assume the prior generation was backward and wrong and the current generation they inhabit is the paragon of excellence. And sometime during the social media evolution of our world, the concept of outrage became more than a quick moment of emotion but a lifestyle, even an industry. We became fiercely territorial about minor things (from TV shows to sports teams) that slowly escalates a dangerous groupthink that lowers all though to the lowest common denominator.

Now well-documented gaffes from other eras refresh the news cycle and teams are constructed—be it naturally or artificially— to create the ultimate “us vs. them//if you’re not with us, you’re against us” mentality which now only emboldens the more passionate of backward people to decry what they see as abnormal. When these folks get really spurred on, they act, sometimes, in lethal ways.

The Twilight Zone is entertainment, for sure, and “Maple Street” has the exaggerated reality in it to show the audience that what we are watching is, of course, not real. But frankly, that is the best way to force the truth through: with ethical subterfuge. In 1960, “Maple Street” played with the still open anxieties of desegregation (Brown v. Board of Education, 1954), the concept of racial integration (black minority populations went up anywhere between 2% and nearly 4% in every region of the US excluding the South, in 1960, and continued into the ’70s and ’80s), and a business landscape of mergers and conglomerates, with a shift to housing and burgeoning tech, leaving the automotive industry and farming, traditional powerhouses, as second-tier drivers of industry. Oh, and there was that daily threat of nuclear annihilation!

In 1960, all of that went unsaid, of course: it was a part of life, most of it unspoken, lingering in the air. “Maple Street”, from the 21st-century perspective, with the benefit of hindsight, drives home the absurdity of what is essentially “white flight” paranoia manifesting yet again, eating the suburbia wealthy whites “escaped” to from within. Of course The Other didn’t rape and pillage Camelot, and society, as always, adapted, mostly with growing pains. Though, hearing some of the rhetoric espoused these days from those in power makes you think maybe Serling didn’t hit us over the head hard enough.

The concept “Maple Street” presented: of mass panic when the comforts of home we take for granted are suddenly gone, has been repeated and may still be again. One notable example is The Trigger Effect, a forgotten thriller starring Kyle MacLachlan and Elisabeth Shue, in which a large portion of the US population loses power and, when it seems the situation may be permanent, becomes unraveled.

“Maple Street” is truly an iconic piece of television history to which I extend honest, and not empty, thoughts and prayers, to become a document of a bygone era and not an annual reminder, of what brews in the heart of even the most idyllic of neighborly streets.

For further Twilight Zone reading, please see my full season, episode by episode breakdown of CBS All-Access’ The Twilight Zone from Jordan Peele as well as my first look at the original series, “Five Characters In Search Of An Exit”.