There’s a new film by Miguel Llansó that is sheer originality and brilliance: Jesus Shows You the Way to the Highway.

If you’ve already seen Llansó’s 2015 film Crumbs, you’ve experienced the cinemastery of which he and the teams he assembles are capable. If you’ve not yet seen Crumbs, well, then, this review holds two surprises for you.

The brilliance of Jesus Shows You the Way to the Highway comes from its capacity to combine a radically eclectic selection of cultural aesthetics and tropes with a distinct vision and a theoretical political acumen. It’s a kind of pastiche with depth and texture. It’s cinema from an alternate universe in which David Lynch is an avid reader of Michel Foucault, Fredric Jameson, and Naomi Klein, and where Ethiopia holds a powerful place in the social imaginary. 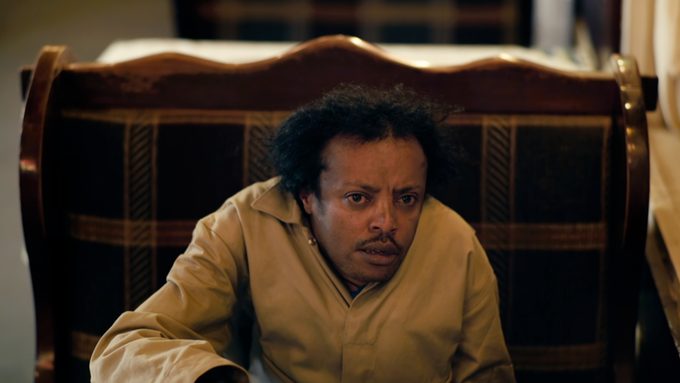 I think it’s justifiable to claim that Jesus Shows You the Way to the Highway is practically unparalleled in recent cinema for its capacity to synthesize total zaniness with provocations to analyze geopolitical histories, the present, and future. And I say provocations because the film leverages its zaniness to lead spectators into critical avenues concerning espionage, biopolitics, gender dynamics, and technocultures of economics and repressions, all without providing particular answers or positions on these. Like the characters caught up in the increasingly bizarre tangles of worlds in the film, spectators are barraged with mysteries that compel us to work on them yet promise to keep developing and eluding total comprehension and resolution.

This is critical surrealism; hyper-pragmatic absurdism.

The story centers chiefly on CIA Agent D.T. Gagano (Daniel Tadesse)–his mission, which evolves and glitches as the film proceeds, and his relationships. Early in the film Gagano and his colleague, Agent Palmer Eldritch (Augustín Mateo), are tasked with entering a VR world to terminate a computer virus called “Soviet Union.” The virus has been attacking the ad system of a major platform called “Psychobook” with diabolical results such as Chevrolet advertising videos being replaced by videos of Stalin playing chess. When the agents and others are inside the VR world, their avatars are depicted as people with black masks over their heads and ridiculous two-dimensional paper masks with eye-holes in the pupils, and their movements are an unsettling stutter-stop motion as if they’re clunky clockwork bodies. 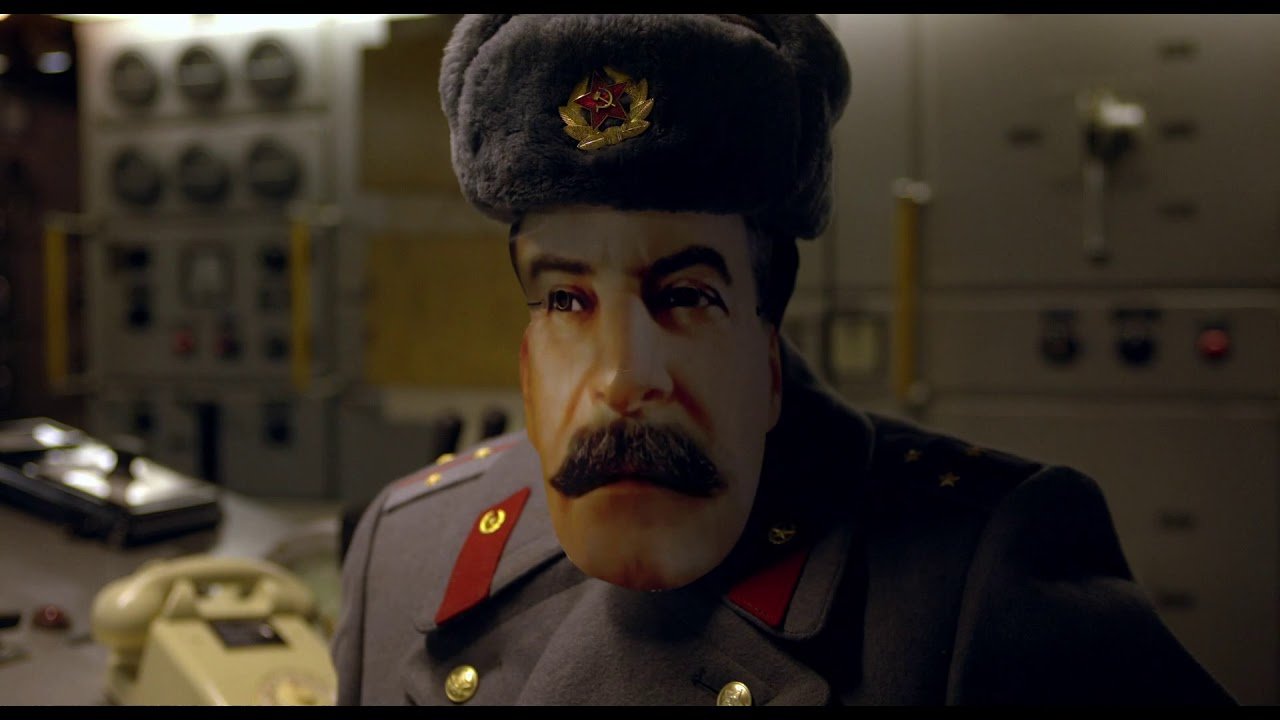 Agent Gagano’s mask is the face of Richard Pryor, in what I like to imagine is an allusion to David Lynch’s Lost Highway, and in many ways the aesthetic sensibility of the VR world is on a par with Lynch’s Twin Peaks: The Return—but with a Stalin avatar that battles with a hammer in one hand and a sickle in the other. Adjacent to his mission, Gagano navigates his romantic life with Malin, a woman nearly twice his size who dreams of opening a world-class kickboxing academy even as she supports Gagano’s dreams of opening a pizzeria. By the way, there’s something wonderful and intriguing about Gagano’s pizza obsession. What would in most movies be a comedy shtick is, in the hands of Llansó’s direction, an element of political economic and historical critique as well as a detail that reverberates throughout the story arc, as in the key intervention of three kung-fu masters named Spaghetti, Ravioli, and Balthazar.

As the story moves forward, synced with an amazing jazz soundtrack, by the way, Gagano’s consciousness is apparently transferred to a portable tv set, and the figure of Jesus, who is also Roy Mascarone (Guillermo Llansó), reframes the whole mission by claiming that a mysterious green gooey substance known as “The Substance” is the real enemy of all people. It’s here to colonize all people of Earth. Finally, while there’s so much more to try and capture, I feel like I need to mention the persistent presence of the fascist leader, Batfro (Solomon Tashe), who dons a Batman costume that’s a near match to the one Adam West donned in the 1960s Batman tv series. I add this detail here because there’s a crucial juxtaposition late in the film between Jesus’s claim about The Substance and the inclusion in the mise-en-scene of a 1974 Batman-cast Public Service Announcement concerning gender and labor that sparks lines of interpreting Batfro and the film’s critique(s) as a whole. 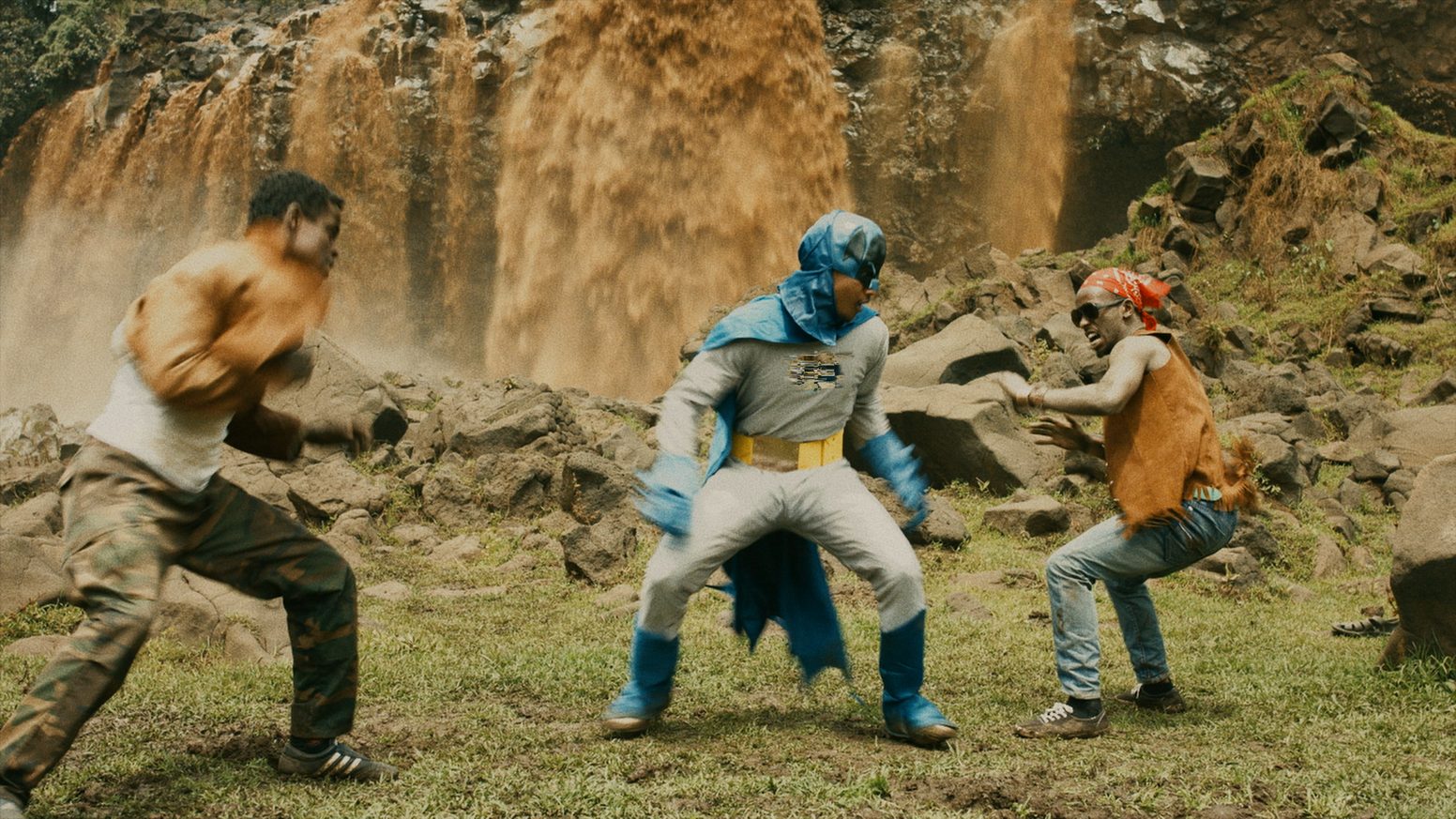 At this point in time when it’s easy, almost overwhelmingly so, to feel suffocated by the predominance of reboots, extended franchises and universes, and vigorous attempts at post-ideological sanitation of political implications (Yes, I’m thinking of Stranger Things 3 here and its stunning capacity to swerve away from doing anything with its ready-made architecture of a 1980s shopping mall with a secret Soviet Union base in its basement), Jesus Shows You the Way to the Highway is a testament to the resistance and resilience of avant-garde cinema. To the future of political acumen connected to a bonkers sense of humor.

The film is a deeply weird, fun, and original contemporary addition to Chaplin’s City Lights and John Carpenter’s They Live. I can’t recommend strongly enough seeking out a screening near you or streaming it once it becomes available, and let Jesus Shows You the Way to the Highway drive you beyond the current limits of your perspective on living on planet Earth today.