Way back in 2005 a screenplay named A Killing on Carnival Row written by Travis Beacham appeared on the annual blacklist. The Hollywood blacklist, in case you don’t know, is an annual list of the best unproduced scripts making the rounds in Hollywood. Based on the script appearing on the list they either go on and get made, or remain in development hell forever more. The original screenplay for A Killing on Carnival Row was so strong that it got the attention of Guillermo Del Toro and briefly, it was mooted as one of the many directorial projects he had in development. Beacham and Del Toro would eventually work together on something that did get made in Pacific Rim (2013). The original script must have been too good to ever not make it to the screen in some form, as the script was eventually rescued and then spun into an Amazon Original series.

The first episode introduces us to the somewhat convoluted mythology via a dreamy camera panning around statues. Set in an alternate history, humankind at some point discovered the land of fae, a realm of mythical creatures from folk tales and fairy stories. Humanity, here represented by a sprawling Victorian era steampunk metropolis known as The Burgue, ransacked this realm for its resources leading to a seven year long war. Truthfully the sprawl you get at the start is more complex than that, but you really don’t need all that background to understand the premise.

Straight away you are in another TV, or streaming show that challenges the border between cinema and the smaller screen. Truthfully I think there is no distinction anymore, the lines are so blurred now that nine times out of ten the home streaming experience is preferable to anything on at the multiplex. Amazon have spared no expense when it comes to portraying this world. The sets are huge and wonderfully detailed, and the makeup effects on the creatures are varied and complex, giving a real sense of actual physical reality. The world seems lived in and rich with history, and it helps with buying into this alternate world and its strange desperate inhabitants. 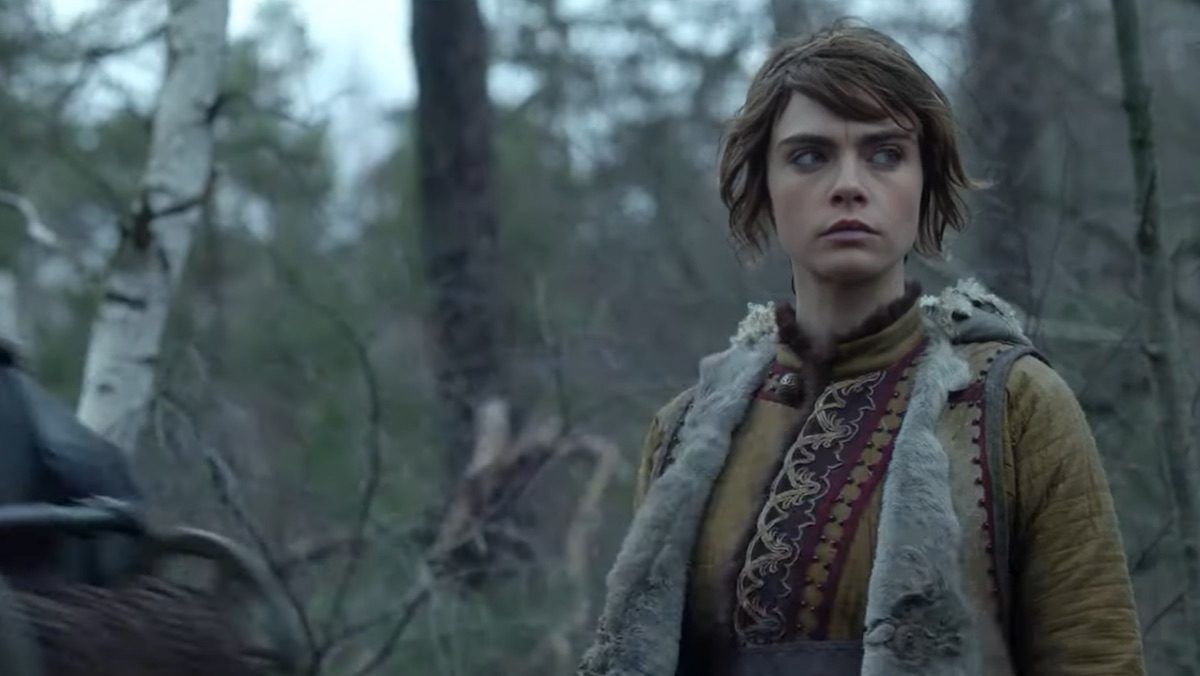 The first episode opens Saving Private Ryan (1998) style with Burgue soldiers slaughtering a fleeing group of fae (or fairies if you like) who are trying to board a ship off the coast to be transported illegally to the Burgue. Amongst the persecuted is Vignette Stonemoss (Cara Delevigne) who proves herself a dab hand at killing attack dogs, and is eventually the sole survivor who makes it to the ship. We then move to The Burgue and find police inspector Rycroft Philostrate (Orlando Bloom) or ‘Philo’ dealing with the tension on the streets between humankind and the booming immigrant fae population. Philo is currently embroiled in an investigation of “Unseely Jack” who is attacking and killing poor innocent fae with a hammer to indifference from a racist police force. Philo however fought alongside the fae in the war and has considerable empathy for them as they are shouted at and harassed on the streets.

Back on the ship we learn through a photograph that Vignette and Philo were once in some kind of relationship, and Vignette thinks Philo perished in the war. The ship is eventually wrecked and Vignette is again the sole survivor. This brings her to the attention of rich weirdo ship owner Ezra Spurnrose and his shallow sister Imogen, and so Vignette is forced into house servitude like most of her kind based in the city. We are also introduced to the government, debating the immigration problem in The Burgue, lead by no-nonsense Chancellor Absolom Breakspear (Jared Harris). The chancellor has a major problem in that his son Jonah is a little too fond of the fae prostitutes on the titular area of Carnival Row, and a political scandal is likely at any minute. It doesn’t help matters that Jonah is then kidnapped after a tryst with a fae at the local brothel.

We live in a current political climate where there is going to be an increase in art reflecting our current terrible reality. Critics love an allegory, and search to find hidden meaning in everything that comes out. Carnival Row has this coming out of its (pointed) ears. It is both occasionally on point and sometimes thunderingly clumsy. There is a scene set in The Burgue parliament which has all the echoes of things we see on TV every day with the British parliament arguing over the Brexit mess. This scene is a little bit clever and a little bit clumsy, but sets up the politics of the world nicely. Later on we have some scenes where a rich fae who inherited wealth from his former master, moves into the upper class neighbourhood next to the Spurnroses. I quite liked how that subplot started, but where it went by Episode 2 was head slappingly on the nose and contrived, with neither the writing nor the performances to entirely convince.

As Carnival Row started out as a feature script, it’s likely that the main thrust of this would have been around Philo’s investigation of Unseely Jack (Unseely means hateful in fae) and his relationship with Vignette. These are the most compelling plot strands of the show so far. This being a prestige streaming series though, there is a need to pad this out, and so we get the subplots and the characters that both work (a fae prostitute named Tourmaline) and don’t work (anything with the Spurnroses). However by Episode 2, Carnival Row  gets more comfortable, and starts to build into something that could eventually become an all timer.

Philo’s investigation into the killer takes a dark turn once racist police and visiting sailors are thrown out as suspects. With the killing of a once famous fae singer, and an interrogation with her former business partner, things get deeper and more compelling. A weird priestess and a gory murder scene hint at Lovecraftian terror that the fae have brought with them into the human world, and it starts to go beyond feeling too indebted to the real life Jack the Ripper case as a reference point. Philo and Vignette are reunited, and although their relationship still remains unclear, there is an intensity to these scenes that Bloom and Delevigne bring with them that really works. Their chemistry has you invested in both of them working out whatever it was that once came between them.

The Spurnrose subplot heads into even more terrible territory thanks to a sudden change of racist thinking from Imogen, and the kidnapping of Jonah takes a twist I didn’t see coming. Mixed feelings about the subplots aside, by the end of Episode 2 I had taken to focusing on how these scenes develop and build the world of Carnival Row. World building is definitely this show’s strongest point. Fae being housekeepers and prostitutes with no other options, despite being accomplished in their homeland, may be eye rolling at times, but I started to care about their plight.

What I was worried about most going into Carnival Row was the two leads Orlando Bloom and Cara Delevigne. Neither performer has really impressed me thus far. Bloom has been good looking but mostly wooden since 2001 and Delevigne has only really ever played underwritten male fantasy figures. I’m pleased to say that both excel here. Bloom is a thousand miles away from Legolas. He now has some mileage on his face at age 42, and with his cockney accent and strange gait, he absolutely convinces as a haunted yet empathetic inspector on streets that are about to explode from hostility. Delevigne is equally impressive, both fiercely determined and ethereal, and with an accent that barely waivers. Aside from the little details of the world, these two are the main reason to keep watching, and I am invested in their relationship way more than I expected.

The pacing overall in Carnival Row feels very strange thus far. The first two episodes directed by Thor Freundthal (seriously) feel like they require the breathing room found in something like Westworld, and yet the show seems breathlessly in a hurry to get on with it. You are never bored so I suppose that’s good, but the occasional respite from world building and plot points wouldn’t go amiss. By the time I got to the end of Episode 2, I wondered why there was the unnecessary mythology building text right at the start. They spend so much time providing you with information that you could easily fill in any gaps in the mythology for yourself.

Despite its flaws, Carnival Row is giving us a highly cinematic new world that feels dirty and lived in. With the introduction of a fae underworld that Vignette gets involved with at the end of the second episode, and the hints at darkness to come, there is enough here to guarantee I keep watching.