My Brother’s Wedding was the first film I watched on The Criterion Channel when the streaming service debuted back in April. I suddenly had access to hundreds of classic movies in the Criterion library, but this was the title that I chose first over all of the others. So why this movie? Quite simply, I had never heard of the film before and the brief synopsis on the site made me believe that I’d be stepping into a world I was unfamiliar with, a world that would be totally new to me. That’s one of the best gifts that art can give us – the opportunity to see the world through someone else’s eyes. Since watching this film, my curiosity led to my research on the movie’s history and I learned about its director, Charles Burnett. 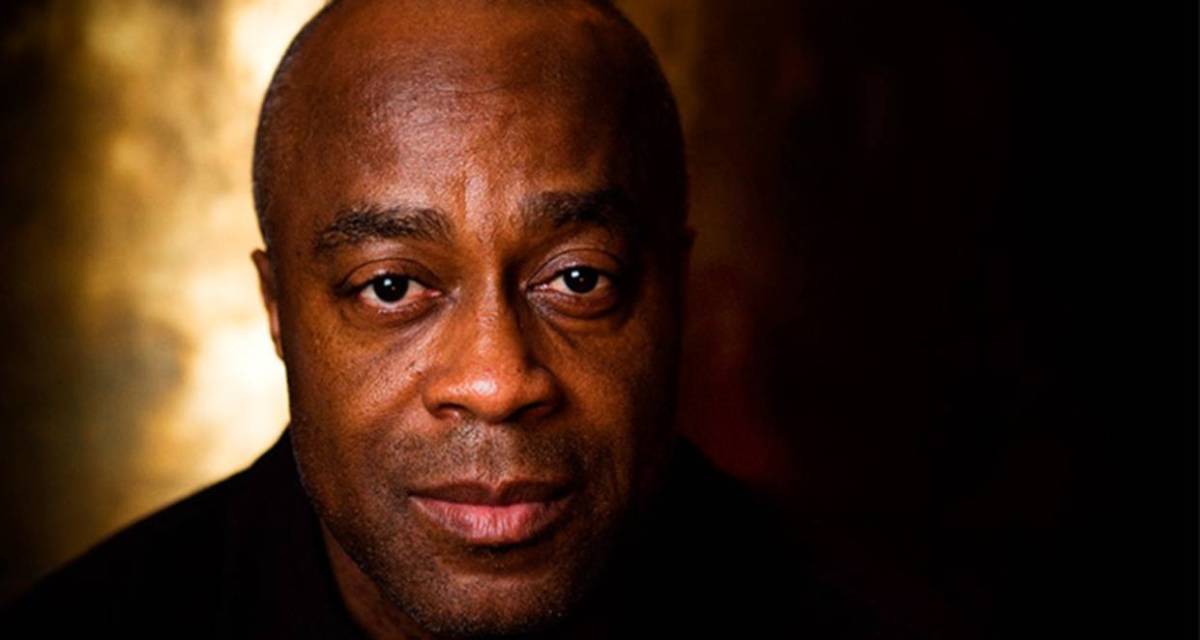 Charles Burnett was a UCLA film school graduate. His master’s thesis, the film Killer of Sheep, was released in 1978. The film got rave reviews on the independent film circuit, but never had a wide release due to complications securing the music rights to the music he used in the movie (if you make a student film in college, it should probably be assumed that Earth, Wind, and Fire music is going to be pretty expensive to clear). The film depicted the life of working class African Americans in the Watts neighborhood of Los Angeles. It was a low budget and gritty slice-of-life movie about what it meant to be black and living in the city in the late 70s, a perspective not often seen on celluloid.

After the critical success of Killer of Sheep, Charles Burnett started work on a new film. This one had a $80,000 budget (eight times the amount of money used to make his first movie) and was intended to be the film that gave Burnett a chance to be appreciated at a nationwide level. However, a series of disastrous circumstances prevented that from happening.

In the midst of editing, Burnett sent a rough-cut of the film to his producers. They decided to immediately send the movie on to a New York City film festival to meet the entry deadline, even though Burnett begged them to let him finish editing the picture first. And so My Brother’s Wedding premiered at the 1983 New Directors/New Films Festival in New York in its 115 minute unfinished version. Janet Maslin was at the festival and gave the film a middling review in The New York Times: She referred to the acting as ‘amateurish’ and the directing style as ‘stiff and rudimentary’, going on to say ‘there is almost no verisimilitude to the film, and not much surprise or excitement’. Her review scared off potential distributors of the film. 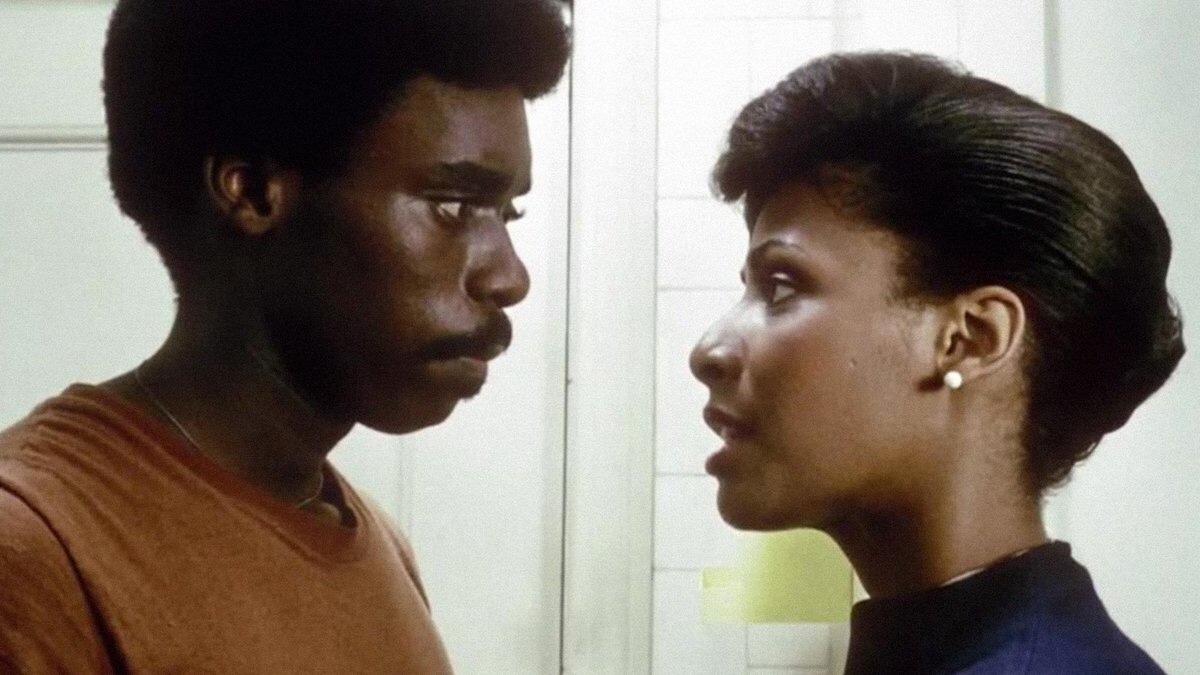 It was difficult in 1983 for a black American filmmaker to break into the industry. Charles Burnett was an acclaimed but not yet bankable young director just out of college, and his first ‘big movie’ just got panned in the New York Times (no one seemed to care that he hadn’t finished editing the movie yet). With no distributors for the film, it was shelved. Burnett wasn’t even allowed to finish his work on the movie, and this disastrous blow totally derailed his film career. He wouldn’t make another movie until 1990’s critically acclaimed To Sleep With Anger starring Danny Glover (made possible by a $250,000 grant from The MacArthur Foundation, a private foundation that gives grants to support impactful creative endeavors).

My Brother’s Wedding sat on the shelf for almost 25 years until Milestone Pictures came along and saved the movie from obscurity. Not only did they pay to restore the film print, but they actually let Charles Burnett finally finish editing the movie. The re-edited film was released in 2007 to critical acclaim. It’s so heartwarming to see a film restoration success story like this, it almost makes up for the barrage of superhero movies one has to endure at the multiplexes. Sometimes the good guys really do win in the end. 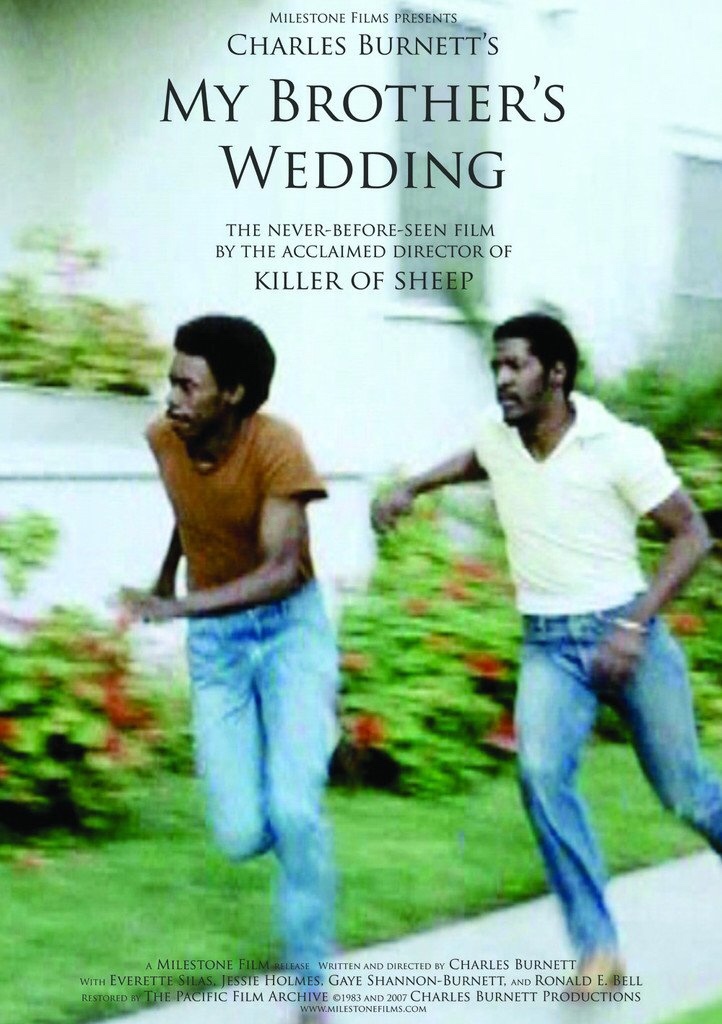 My Brother’s Wedding tells the story of Pierce Mundy (played by Everett Silas), a young black man living in South Central Los Angeles. Pierce works at his parents’ dry cleaning business, and he’s mentally resigned himself to life in his lower-class neighborhood. He has a close relationship with his family and with others in the community. He works hard and goes to church every Sunday. Then his best friend Soldier (Ronnie Bell) gets released from prison and shows up in the neighborhood again. Soldier is dangerous and reckless, always getting into trouble and managing to drag Pierce into his wild schemes. Contrasting with Soldier, Pierce’s older brother Wendell is an up-and-coming lawyer who has recently shifted into the higher end of the social order. Wendell is preparing to marry Sonia, a black woman who was born into wealth, and this dichotomy between the upper class and the lower class drives the movie and provides conflict for its main character.

My Brother’s Wedding may disorient any viewers who are not accustomed to watching true independent films. The actors are not professionals, some of the dialogue is improvised (although it was so seamless, I honestly couldn’t tell when the actors were working off script), and the camerawork is utilitarian and direct. Some people see a low-budget movie like this and immediately dismiss it, having become accustomed to seeing big-budget Hollywood spectacles. But to me, independent films such as this can be more real and honest than anything that comes from the major studios. In order to make money in the film industry, you often have to appeal to the lowest common denominator. The sad fact is that the majority of American people do not want to see a quiet, honest film depicting the life of a black man in early 1980s Los Angeles.

I feel like it was almost fortunate that this film languished in a vault for almost 25 years before being completed. A major studio like Paramount or Warner Brothers might have demanded more action, melodrama, and intensity. Instead we get a movie where the characters feel like people who could have really existed in situations that actually could have happened, and not simply stereotyped characters running from unlikely automobile explosions. There are no ‘good’ or ‘bad’ characters in My Brother’s Wedding, instead we have people with conflicting emotions and desires. Wendell and Sonia are not portrayed as one-dimensional, uppity rich people. Similarly, Soldier is not characterized as a superficial thug. There are no villains or heroes in this movie, and that’s a lot like life. 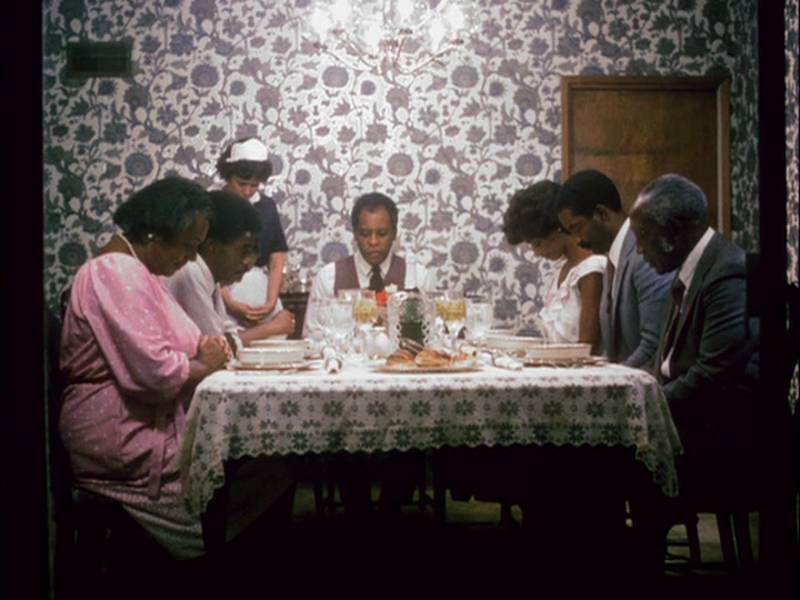 While My Brother’s Wedding deals with some important, sensitive topics, it’s far from being a heavy-handed film. There is a lot of humor in the picture:

•Pierce and his family are having the big ‘meet the parents’ dinner with Sonia’s family. While Pierce antagonizes his future sister-in-law by insinuating that she is nothing but a stuck-up, morally corrupt lawyer, Pierce’s father shows his lower-class colors by requesting ‘Old Grand-Dad’ whiskey in lieu of the fine white wine he is given. I literally busted out laughing at the Old Grand-Dad line.

•Pierce reluctantly lets Soldier use the back room of the family dry cleaners to have sex with a girl he’s picked up. Cue Pierce’s god-fearing mother unexpectedly stopping by before church to retrieve her prayer book, catching the couple in flagrante delicto…on top of the aforementioned prayer book.

•There’s some unintentional humor when Pierce and Soldier are accosted by a gun-toting hoodlum on the streets. The goon jumps out and shoots at Pierce, except his gun doesn’t go off so he freaks out and runs away. This all happens so randomly and is over very quickly. There’s an odd lack of menace about the scene and I had to rewind and replay it to fully appreciate the ridiculousness of it all. Sometimes the low budget and directorial inexperience shows up in the finished product, and we as an audience are all the better off for it. Good times. 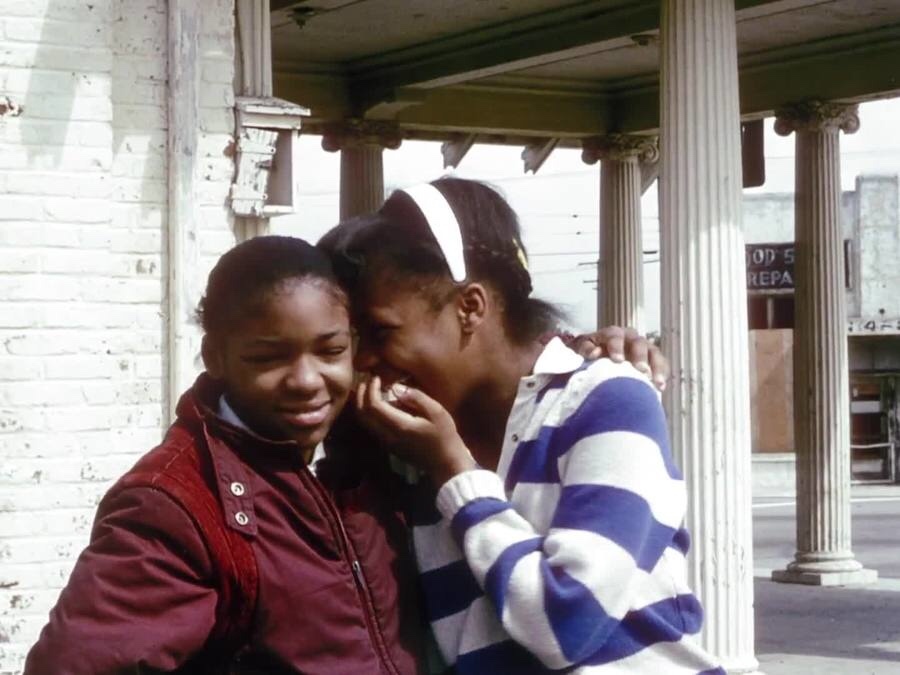 As the film approaches its climax, Soldier dies in a car accident. Pierce is grief-stricken over the death of his best friend, and wouldn’t you know that Soldier’s funeral is scheduled on the very same day as his brother Wendell’s wedding. Pierce tries desperately to get the wedding postponed until after the funeral. Failing at that, he then attempts to get the funeral postponed until after the wedding. Ultimately he has to make a decision between being the best man at his brother’s nuptials or saying goodbye to his friend at the mortuary. His overbearing mother convinces him to support his brother at the church, but he has a change of heart before the ceremony begins and drives off to the funeral parlor. Alas, he arrives too late and misses the funeral. The movie ends with Pierce dejectedly sitting in the parking lot of the mortuary, still clutching the wedding rings, feeling like he has let down both his family and his best friend.

This is a muted and somber ending for the film, yet strangely appropriate. Throughout the entire movie, Pierce has wrestled with his integrity. He has questioned where his loyalties lie and has been pulled in different directions: His mother’s tenet of ‘work hard and be true to God and your family’, his lifelong friendship and loyalty to Soldier (whose life mirrors that of a low-rent hooligan), his brother Wendell’s leanings towards high society and respectability that threaten the image of what Pierce thinks it means to be a black man in America. In the end, Pierce is still trapped in the middle, teaching no conclusion to these questions. 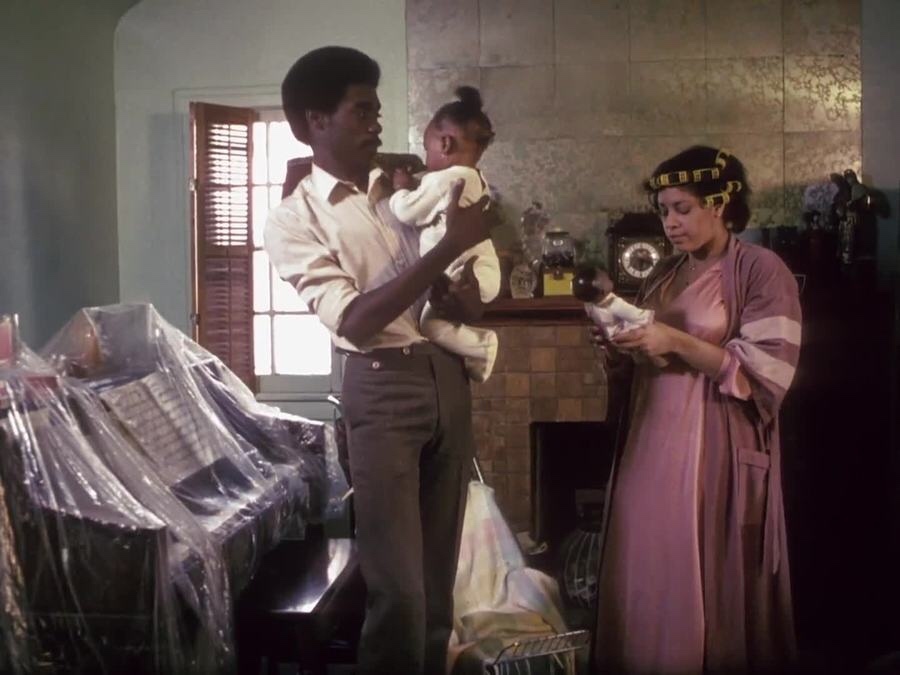 I’ve never seen anything quite like this film. It’s not a perfect movie by any account but what it lacks in style, it more than makes up for in courageous honesty. It’s a huge breath of fresh air amidst the usual popcorn blockbuster films of our era. My Brother’s Wedding is available on DVD from Milestone Films (for a whopping $149) but your best bet is to check it out on the Criterion Channel, where it’s available for streaming until September 30.