Who won’t be talking about Roman masturbating to Gerri verbally decimating him over the phone for the rest of the series? Roman’s sexuality has always been mysterious and this week, while away at management training, Roman called his girlfriend for phone sex, which he had earlier in the episode described as something that boring, normal people do. When her attempts to be sexy did nothing for him, Roman called his surrogate mother, Gerri, and wound up pleasuring himself to her “Masochist Mommy” ways. While being one of the funniest things I’ve seen on TV in recent memory, it also added a layer of depth to both Roman and Gerri’s characters. Roman, the youngest child of a powerful man with dominating older siblings, and Gerri, the one always forced to clean up the family’s messes, found each other in a way neither probably saw coming. Their dynamic is one I can’t wait to follow moving forward.

This week we saw Connor represent the family at the service for the recently deceased “Mo,” who it turns out was named Lester and was only called “Mo” (i.e. Mo-Lester) because as Connor put it, “Dad wouldn’t let us in the pool with him.” While many comedians attempt to make jokes about sexual abuse and how people simply didn’t talk about it in years past, Succession actually found a way to make this serious topic funny with the extremely rich and aloof Connor repeatedly saying “Times were different then.” It was poking fun at those who, in real life, continue to downplay the wave of people speaking up and the big names being outed as predators.

One major difference this season compared to Season 1 is how “straight from the headlines” Succession has become. In addition to Connor attempting to cover for a pedophile, this week also saw the comparisons between ATN and Fox News become unavoidably obvious with a story about an anchor having ties to the Nazi Party. Watching the organization assess the public outcry over a news anchor on a major network being outed as a Nazi and “standing by their talent” was another holding-a-mirror-up-to-our-face moment. This is who we are, America. When anti-fascist protestors and ATN supporters clashed outside ATN headquarters, someone pulled a gun and fired (offscreen) in the most extreme mirror-in-the-face moment the show has given us so far.

Last week I was speaking to a friend who works for a Fortune 500 company. He was telling me about sitting in a boardroom, one much the same as we see in Succession, and watching a HR video on what to do if a shooter enters their building. Watching the cast of Succession scramble to their safe rooms, all I could think of was that friend. Succession was telling a story this week that is already on the minds of many, many people, particularly in the United States. It should’ve felt far-fetched and it should’ve been nothing more than entertainment, but it rang a bell so true to life that it was hard to shake. This is who we are, America.

Of course, nobody walks the line between dark and hysterical better than Succession. In the midst of the active shooter, Tom and Greg were taken to the less important personnel’s safe room—a fact which drove Tom crazy. While the two of them were together with a few other employees, Greg shared his true feelings about working for ATN. He can’t turn off his strong feelings of disgust for what they do yet he likes the life he’s building. Greg has taken the role of the conflicted conscience of America on the show. He doesn’t like what he’s seeing but is he really willing to stand up against what he doesn’t believe in? 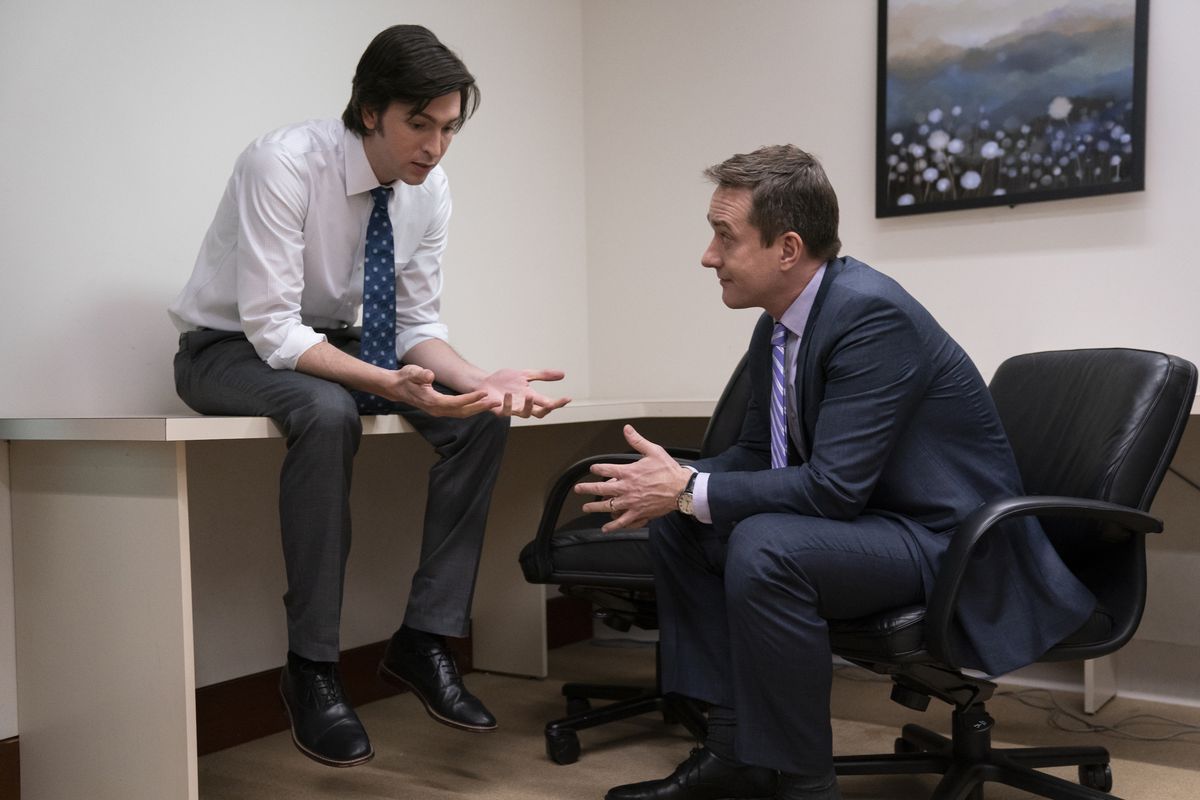 Greg struck a nerve with Tom while in the safe room. In an attempt to move on to a new role, he was doing his best to let Tom down easy, implying that even in his new role they’d be working together, and calling it an “open relationship.” All of Tom’s feelings about his wife’s views on their relationship came to the surface in that moment. His feelings of pain, inadequacy, and betrayal all broke through, with Greg playing the role of Shiv. As a viewer, I so desperately wanted Greg to break free of this relationship and for Tom to also have a breakthrough but the opposite happened. Greg pulled a corporate power play, awkwardly blackmailing Tom, and Tom respected him for it. These two men were so close to a breakthrough but they both ultimately took a step away from the light and back into the dark corporate abyss.

The teased rivalry between Kendall and Shiv, which has dominated their relationship dynamic throughout Succession‘s second season, seemed like it was finally going to take center stage this week—and in some ways it did. Shiv was brought in to “observe” and got to see firsthand that Kendall is still very much their father’s right-hand man. When negotiations with a representative of the rival news company Logan wants to buy, Rhea Jarrell (played by the amazing Holly Hunter), stalled out, Shiv did her best to keep up with Kendall, who was operating exactly how their father wanted him to.

Shiv felt the cold shoulder all episode. The relationship between Shiv, Kendall, and Logan is complicated as Kendall is the one he wants at the top; Kendall is the chosen one. That was never more evident than when they were being whisked away to the safe room and the only person Logan inquired about was Kendall. A scene between Shiv and Kendall at the very end of the episode served as the perfect exclamation point. Shiv wanted answers from her brother but Kendall, completely destroyed on the inside, had none to give. Watching him ask his sister for a hug and doing his best to not fall apart was brutal. Kendall knows that he’s too much of a liability to ever ascend to the top: the role he was born for. He knows it’s going to be Shiv. Asking for his sister’s mercy when she takes the keys to the kingdom was all he could muster. Time and again, Succession shows us that being the right hand to the emperor is all Kendall has and all he’ll ever be able to be.

Kendall tries to feel alive through cheap thrills and stays numb to get through the day. He is the walking embodiment of everyone who feels that they have no choice, that life can’t get any better, and has to cling tightly to what little they have. In some ways, he’s a representation of all those who feel hopeless in today’s dark and challenging times. Is there an escape? Is there hope in sight? It’s so tragic to watch Kendall now because it’s so easy to see our own pain in him. Here’s hoping there is light at the end of the tunnel but in Succession, just like in life, that’s far from a safe bet.