There are times in life when we meet people, people that seem familiar even though as far as you know, this was your first meeting. When getting to know these people, further similarities are revealed. You have comparable childhood backgrounds, similar parents, similar current stations in life. As time moves on further similarities are revealed, things you have in common where you may have thought previously that you were totally alone in this belief or characteristic. This usually ends in the cliché of being able to “finish each other’s sentences” but this just means you know them so well that you can anticipate their reaction to something you said or did. If you are lucky you might experience this once or twice in your life. Flowery explanations range from soulmates to fate and destiny. It could just be more likely that we are all just pinballing around and everything is random. What if it isn’t though? What if there is some force guiding us or influencing us towards certain people? These are the questions at the heart of Shane Carruth’s second feature, the surreal science-fiction film Upstream Color (2013).

Shane Carruth is a former software engineer with a degree in mathematics. In 2004 his directorial debut Primer won the Grand Jury Prize at the Sundance Film Festival. Primer is not an easy watch, but it’s perhaps one of the last great definitions of a cult movie. Carruth wrote, directed and scored the movie as well as taking the lead role. The film concerns two engineers who take on entrepreneurial projects in their garage outside of their day jobs. When trying to research the reduction of objects through electromagnetism, the pair accidentally invent a time machine able to travel six hours into the past. The implications of the invention and the moral conundrums it presents forms the core of the film as it places a strain on the central working relationship. How it unfolds is something you actually need a diagram to fully understand, but Primer is an extremely rewarding experience in every manner, and a true original. 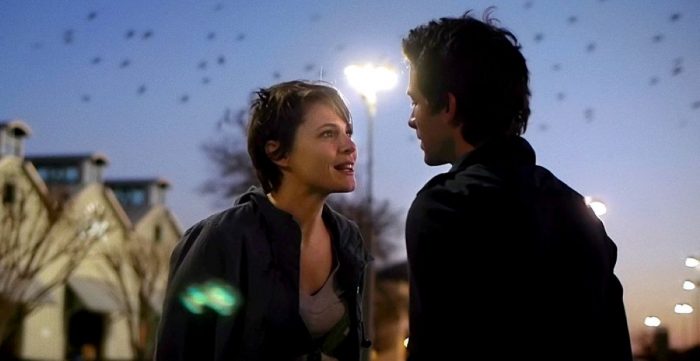 Based on the reception to Primer, it would have been expected that Carruth would be tempted by that Hollywood dollar and end up somehow directing a DC or Marvel universe movie. That didn’t happen, for all intents and purposes, Carruth essentially vanished after all of the acclaim. Until 2009 when it was revealed that Carruth was working on an ambitious science-fiction script named A Topiary and was looking to secure financing, but was confident this would happen as it had the backing of producer Steven Soderbergh (Oceans Eleven 2001). A Topiary however, failed to get made. The screenplay for this film has been bouncing around online for a while, and if it is the real deal, then we truly missed out on what could have been a Close Encounters for a new generation. It was perhaps too ambitious, too obtuse and outside of the mainstream to ever get the budget needed to do the concept justice. It even starts with a note from Carruth on how this script doesn’t follow the typical one page equals one minute of screen time practice.

Out of nowhere nine years later in 2013 back at Sundance that January, Carruth premiered his second feature: Upstream Color. Shot in forty days, Carruth again starred in, scored, produced, edited and directed the movie and even controlled distribution.

Upstream Color is a strange beast in that its both more accessible than Primer and yet offers even less in the way of narrative clarity. We begin with footage of kids manipulating worms and a mysterious man farming them. The worms seem to give the two kids some kind of psychic link where they match each other’s movements perfectly. The mystery man takes the worms, hidden in pill capsules, and trawls bars posing as a drug dealer. He manages to drug Kris (Amy Seimetz) and in her trance-like state, she transfers to the mystery man all of her assets and finances. Kris later wakes up and finds the worms moving around beneath her skin which she attempts to remove. She is drawn to a pig farmer and sound recordist who then removes the worms and transfers them to a piglet. Sometime later when she comes back to reality, Kris is fired from her job and discovers her finances in disarray.

A year or so later, Kris meets Jeff (Shane Carruth) a man who has been through a similar experience and was ruined after his career went south due to corporate theft. A romance between the two blossoms and Jeff and Kris discover they have similar scars where their respective worms were removed. They seem to share the same memories and seem to experience the same fear and anger as each other even when they are apart. The two of them then become aware of the presence of the pig farmer and his sound recordings. They choose to confront him and take back control of their own fate.

Upstream Color is a true work of art, and like all great art what you get out of it depends a lot on what you bring to it. This is a markedly different experience from Primer, a film that relied on dialogue to convey its narrative. Upstream Color is a mood piece above all. It relies on atmosphere, beautiful cinematography, and an evocative score to bring its message home. There is minimal dialogue here, no big moments of voices raised for drama. The two performances at the core sweep you along in that recognizable romance of when you meet someone familiar and yet you cannot explain it. It then essentially destroys that connection by saying that it was all pre-ordained, a system of control by forces beyond our understanding. 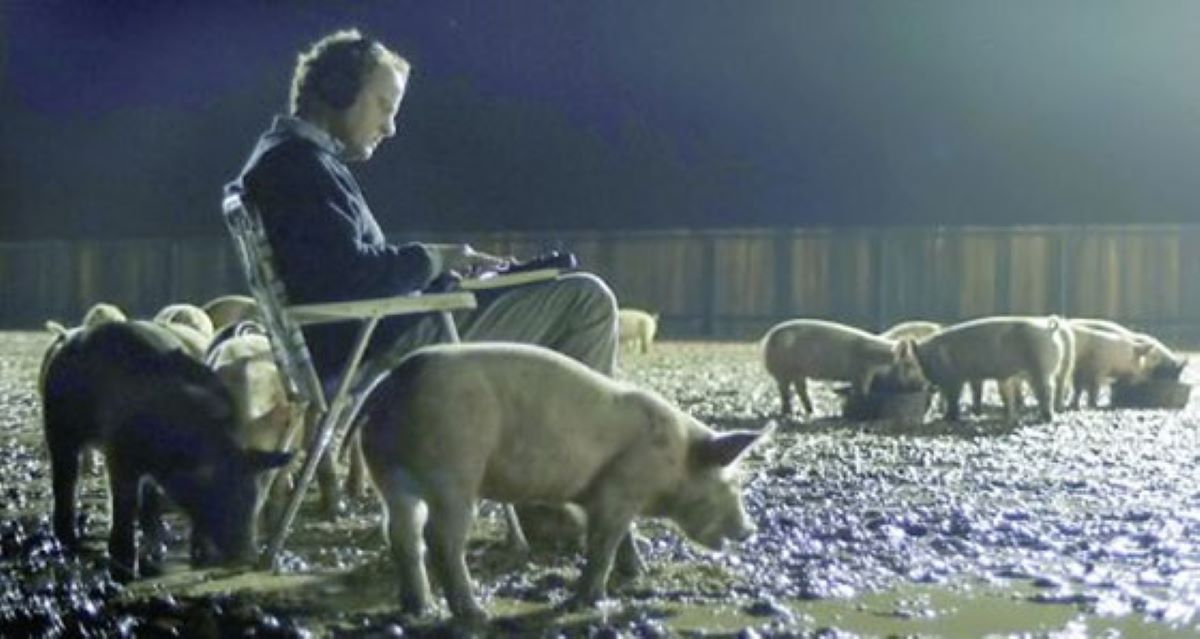 You can interpret the film in many ways. It is undeniably a personal film by Carruth, more personal than his first and perhaps a reaction to his experience following Primer and his frustration in trying to get A Topiary made. In early 2013 around Upstream Color’s release, Carruth said of the project that failed to materialise that it was “the thing I wasted my whole life on” and considering this was a period from 2009 to 2012 that we know of that Carruth was working on it, it’s perhaps understandable that there might be some frustration from the stalled project which made its way into Upstream Color. It was so long a wait between Carruth’s two films that filmmakers such as Rian Johnson (Brick 2005) would tweet to remind people that Carruth was alive and well and that A Topiary would eventually blow everyone’s minds. Carruth it seems, does not do social media.

Although Carruth had the backing of Steven Soderbergh and eventually David Fincher (Fight Club 1999) as producers on A Topiary, in this day and age it was still not enough to get the film financed. Carruth took endless meetings with financers who would be interested and want to see the film made. When it came time to stump up the cash however nobody would follow through, even when the budget was lowered to 14 million from its initial price tag of 20. Carruth eventually walked away, not wanting to turn to crowd financing which was then just taking off and eventually realising there was never going to be any common ground between his vision and that of the potential financers.

Much of A Topiary‘s epic 244-page narrative concerning patterns and mysterious life cycles makes its way into Upstream Color. You could look at the whole film as a reaction to Carruth’s experiences of trying to get the film made. With shadowy forces pushing people in directions they do not wish to follow, have no control over, and eventually reject. It’s clear that with Upstream Color, Carruth had a lot of talent and ideas he needed to get out into the world. It in no way feels like a movie that is only the second film from a director that took nine years to make a second film. Carruth’s talent never missed a beat.

Upstream Color came to me at a very confusing time of my life. I was in a job I hated where there was a system of control and bureaucracy that I could never fathom or use to my advantage. At the same time, I had met someone in the same position who was very similar to me, where more and more things we had in common would be revealed as time wore on. I actually began to suspect that someone was playing some kind of trick on me. Upstream Color is very much about these things. It’s about the systems of life that we cannot see and the way in which it sometimes feels like there is something there with some unknown purpose. Carruth has said himself that the idea for the film came from conversations he was having at the time and how that defines identity, but like the best artists, has not elaborated further on what the film means.

As time moves on I have started to see the film more literal in its message. You could see the thief who victimises Kris as the Devil, using the forces of life for his own gain and leaving devastated lives in his wake. You could then see the pig farmer/sound recordist as God, constantly looking over his creation with bemusement and empathy, helping out where he can, and setting people on a more constructive and content path after his opposite has left them reeling. The conclusion seems to say that chaos is preferable to control. Kris and Jeff discover they are not the only ones who have been manipulated and they choose to rebel. They actually kill the seemingly benevolent manipulator and the devil gets away scot-free and never appears again. There are images of the pigs unleased and living free once their carer has been vanquished. Chaos has been unleashed and for a time, free of manipulation, the victims are happier in this new state.

No matter what you bring to it, Upstream Color is a work about the forces of creation, the forces of existence and a film that makes you look at the world slightly differently from the first viewing onwards. Carruth has been talking about a directorial follow up called The Modern Ocean since the positive reception to his second feature. Despite being claimed by many as the best script they have ever read and having Keanu Reeves and Daniel Radcliffe linked to the project, The Modern Ocean has so far failed to go into production. It could well be that Carruth is experiencing the same difficulties that plagued A Topiary, those same forces of control not being able to pull the trigger on another risky project. If we get another film like Upstream Color, born of this frustration, this might not necessarily be a bad thing.